Pets have a way, as you know, and when it comes time to say good-bye you’re never ready – worse than the kids leaving home, or even human demise.  Last week…we said good-bye to ‘Margie’.

This one comes hard – REALLY hard.

Because as anyone who’s ever had to have a pet euthanized will attest to…the guilt, the sense of loss, and that human habit of personifying a cat or dog can be awful.  You know if it’s happened to you, losing your dog is sometimes worse than losing an actual blood relative.

Such as it was last week when Margie, our French Bulldog, left us due to a condition called ‘Addison’s disease’, and what the vet clinic at Ohio State feared additionally as a  “serious neurological disorder” – a tumor.   It marked the second time this has happened at our house in the past decade, first with ‘Salem’ (our family cat) in 2013.  But when you lose a cat there’s always that sense that they just go away.  They have nine lives, you know.

This time…the loss feels much worse.  Except for two extra legs and a lack of thumbs, she was about as much family as you could be.  I know this is a sports site, but I also know that dog lovers, like Hal McCoy, Mark Znidar, and others, will indulge appreciatively.

She came to us as a three-year-old from a breeder in the Columbus area.  We learned about Jen Strickland through our daughter Laynie, who had purchased Margie’s brother, Truman, a year earlier.  They had the same father and mother – just a different litter.  Margie had had a bad experience with a previous owner, and Jen thought that a new home of her own, with a lot of individual attention, would be perfect transition for her.  And as it turned out…she was right.

For a long time she was a nervous  ‘Nellie’.  She trembled a lot, as if she was worried.  She had lost her only puppy the year before she came to us, and if it’s possible (again, the personification), I don’t think she ever forgot – worrying over that missing ‘child ‘.  So, we were always very careful about correcting her, and she actually responded as if she knew that we understood she was trying as hard as she could…and appreciated our patience.

Frenchies are big lap dogs, mainly.  They have wonderful personalities, but mostly they just like being loved.  Some are very active, like to play, and some even ‘sing’ (howl).  They’re great with kids and people, they grow to be very trusting, and they’re very comfortable with a routine.  Margie’s routine was early to bed, late to rise, and during the day…she loved to sleep in her ‘taco’ bed in front of the wood-burning stove on cold winter days.

She loved baths, because she craved the personal attention.  She was patient, and eventually grew to be a ‘one person dog’ – Mindy’s – because Mindy would do things like take the time to dry her with a big soft towel and put her in front of stove to soak up that nice dry heat.  Let someone enter the room where one of us was and Margie would sound the alarm – a mild low growl (she sounded like Marge Simpson) just to let you know she was on guard – but she never, ever bit or threatened anyone.

She’d bark when someone pulled in the driveway, or walked in the back door, because she had this keen sense of hearing.  After all, she had those huge ‘bat’ ears that are indigenous to the French Bulldog breed. 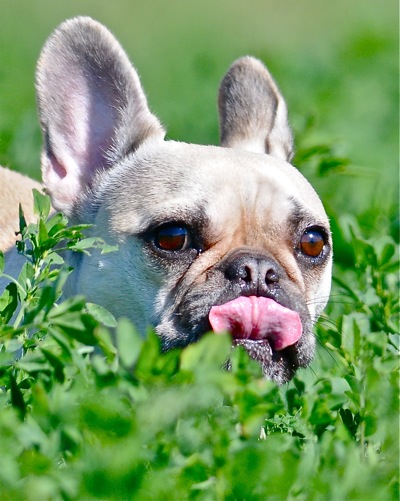 Sometimes I would take her in the car with me to the Unity Bank branch, on Sunset, and the girls behind the counter loved her – always had a treat for her.  She had those big brown eyes and that soft face, and other customers would ask about her.  Margie would just sit there, and sniff the treat…kinda’ side-saddle on the counter (worried, of course), not knowing whether the offer of food as alright, as if to say.  “Can’t we go home now?”

She had some bad habits, to be sure.  Frenchies fart a lot, and they’re bad to yack up food and water if they over-indulge.  And of course if you’re gone from the house too long they’ll leave a little  reminder in the corner of the bathroom, or the spare bedroom, just to let you know:  “Hey, I was here by myself, and you forgot me.”

But all of that was forgiven because when you least suspected she’d crawl on the couch beside you, look up with those eyes, and then rest her head on your lap for a snooze.

Most of them enjoy exercise – running and chasing each other if there are litter mates around.  But Margie had no litter mate at our house, so wherever Mindy was was where she wanted to be, and there wasn’t much running or chasing.  She wasn’t much for walks, stopping frequently to sit down and look longingly at the house.  My favorite photo of her is the one at the top of the page…the first winter she spent with us, and her playing in the snow.  I don’t think she’d ever seen snow before, and she didn’t like it much.  And she particularly didn’t like doing her morning potty routine when the ground was white and the temperature was zero.  She was a dog of comfort, and would do it, but once inside she loved the reward of that warm bed in front of the stove.

In the last year we started to become alarmed.  She put on weight, became increasingly ‘nervous’ and trembled more when she was at rest on the couch.  She acted like something was wrong, but no amount of trips to the vet could determine a problem.

Then, about two months ago, she had a seizure, which she endured and eventually got over, but they started coming in regular order.  Something WAS wrong. 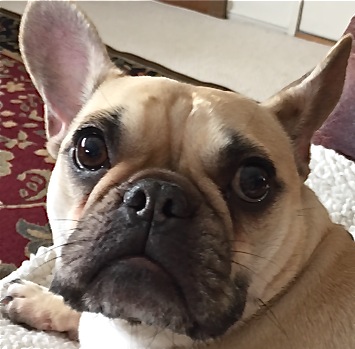 On October 8, we took her to Ohio State, hoping for closure on what was happening, and for a solution.  They warned that she might not be strong enough to endure invasive testing, but would try to discern as much as they could from blood tests.  We left Margie in their care…because the people at OSU were wonderful.  And when we turned to leave she gave us one last look with those eyes – like, “Please tell me you’re coming back for me”.   They called a few hours later to say she had ‘Addison’s’, that it was treatable and that they wanted to keep her for observation in ICU for day or so, just to be sure.

But the doctor also said, “I’m afraid there might be something neurological that we don’t know about, too.  Let’s hope there isn’t.”

We left feeling pretty good – I felt pretty good – because I go to OSU for my own medical testing.  And we came home that night expecting the best of results.  But at 11 pm the phone rang, and it was the doctor telling us that it was not good.  Margie had worsened – that there had been something else, as they had suspected.  She was struggling for breath, suffering, and they suggested the worst of options.  Tearfully, we consented, knowing she’d worry no more.

We discussed our options as to what to do with her remains, and decided that burial in the backyard, under the Buckeye tree with Salem and the rest of the past pets, just wasn’t right for Margie.  We had her cremated and yesterday she came home, in a beautiful small cherry box, with her paw print embossed in soft rubber.

On the mantel…by the wood-burning stove. 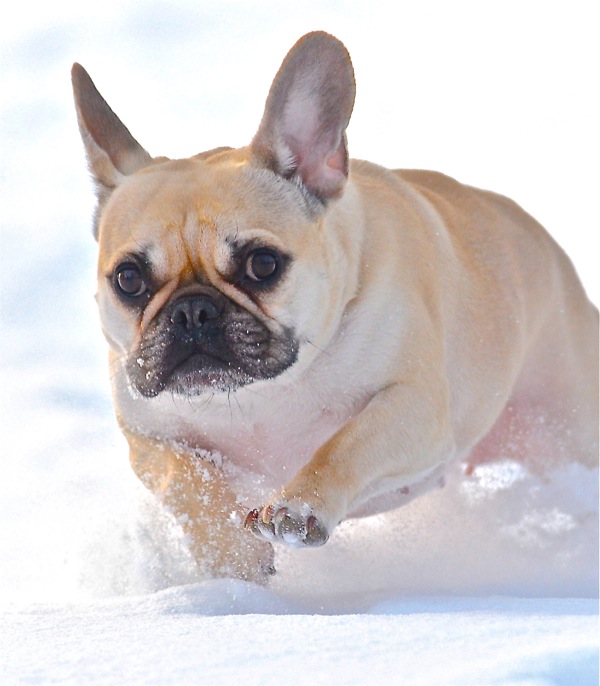 She really didn't like snow, or exercise. For a pet, she was really as much like people as you could be. (Press Pros File Photos - and a favorite)