Don Seyfried brings a century’s worth of experience to the Minster golf team. As he nears his 100th birthday he still hits the links as a volunteer coach with the Wildcats, making him possibly the oldest volunteer high school coach in the United States.

Minster, OH – By his own tally, Don Seyfried has played more than 175 different golf courses in his lifetime. His favorite these days?

Whichever one the Minster Wildcats high school girls golf team is teeing off on.

Seyfried entered the 2020 high school season with a love for golf that started when he was 16 years old. It’s lasted through 14 presidents. It’s witnessed the Great Depression and Dust Bowl. It’s continued through his Pacific Theater service in World War II. And now – 83 years later – it continues to benefit Minster coach Deb Ahrns and her Wildcats.

Seyfried, who turns 100 on Oct. 23, could be the oldest volunteer high school coach in Ohio … and maybe the United States. This season marks Seyfried’s 19th as a volunteer coach with Ahrns.

“I turned 65 this year and it was a tough thing,” Ahrns joked. “I hope I can go as long as he has with the same attitude and the same passion for doing it.”

Seyfried’s introduction to golf started in 1936 during the waning years of the Great Depression. That same year Horton Smith was winning the third Augusta National Invitational Tournament event … now known simply as the Masters Tournament.

As his caddie skills and golf knowledge increased so did the pay. Class B caddies earned 50 cents. Class A’s 75 cents. And if you carried the bag, took good care of the clubs and kept the golf balls clean? Then your golfer might treat you to a bottle of pop that cost a nickel.

These days wood clubs have been replaced by titanium, steel and graphite. Golf carts and hand-pulled carts do the heavy lifting. Ball wash stations are spread throughout the course. And pop costs a little more. But the principles of golf remain the same.

Seyfried – who learned to play right-handed because there were no left-handed clubs — remains a student of the game just as much as a teacher. Among others, he’s taken lessons from Findlay’s own Peggy Kirk Bell, a professional golfer and instructor. Bell, who passed away in 2016, was a strong advocate for girls golf. Consider Seyfried a proponent, too. 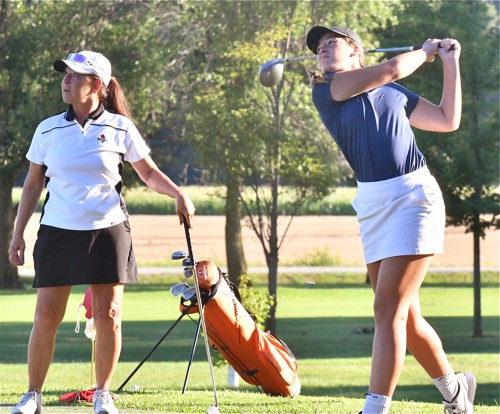 “Unfortunately girls golf seems to be a low priority in this area of the country, and that’s a shame because these girls have a great deal of potential, talent and loyalty.”

“I’ve always thought girls golf, especially high school golf, got the short end of the stick,” Seyfried said. “The girls in small rural communities do not have many options for good quality instruction or pre-high school playing opportunities. Unfortunately girls golf seems to be a low priority in this area of the country, and that’s a shame because these girls have a great deal of potential, talent and loyalty.”

Seyfried is doing his part to help develop it.

“I had a girl who had trouble lining up her drives in play,” Seyfried said. “We worked on it. The next week she double-eagled the ninth hole. Two weeks later she had a hole-in-one on No. 13. I told her that’s enough, you don’t need any more alignment.”

And the rest is history … especially in Seyfried’s case.

He was born the same year women earned the right to vote. The American Professional Football Association, which later became the NFL, started. Amelia Earhart took her first airplane ride … as a passenger. Prohibition began. There were 48 states.

Seyfried was born in a year when the life expectancy was 53.6 years.

“I thought my dad was old and he died at 59,” Seyfried said. “There’s nobody around to talk to, to see how you’re doing (when you’re my age). So you keep on plugging.”

Woodrow Wilson, the 28th president, was nearing the end of his second term in 1920. There have been 18 presidents during his lifetime. Harry S Truman (1945-53) is his favorite.

“I think Truman was the best president we ever had. He made some tough decisions and he made them alone,” Seyfried said. “I think the worst president we ever had was (Bill) Clinton, who was an absolute louse. I didn’t like (Lyndon B.) Johnson because he was a wheeler and dealer. (Dwight D.) Eisenhower was not good at all. He had to have a staff meeting to say good morning. He wouldn’t make a decision by himself. He was a military man and he did everything by staff meeting.”

In his lifetime Seyfried, a Michigan native, saw Detroit’s Charles Lindberg – the first aviator to complete a solo transatlantic flight in 1927 – fly over his school. He watched daring pilots perform their barnstorming stunts during the Golden Age of Flight. He saw the country adopt the Star-Spangled Banner as the national anthem in 1931.

Seyfried served in the Navy for nearly three years during World War II, offering this about his experience: “I saw all the water I wanted to see.”

He worked on a ALS (Amphibious Landing Ship) that had been converted into an ARL (Amphibious Repair Light) repair ship. Regular ALS’s carried troops, tanks, vehicles and cargo that could push directly onto shore with no docks or piers. Seyfried’s converted 316-foot, flat-bottom ship carried divers, tinsmiths, welders, ship fitters, engine mechanics and others. The primary role was to provide repair service to carriers while at sea. Seyfried spent most of his time in the machine shop located on the tank deck.

Though he saw enemy planes he was spared action in perhaps the most brutal theatre of World War II.

“They weren’t after us. They were after the big carriers,” Seyfried said.

After the war Seyfried returned to his native Michigan. He found his way to Minster in 1951 as an assistant chief engineer for Minster Machine. He remained, much to the delight of the Wildcats’ golf team. 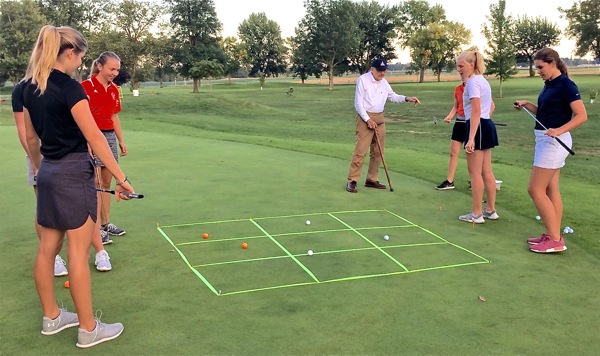 Seyfried’s golf expertise, especially with the short game, has helped the Wildcats be a ‘putt’ above. Ahrns has qualified either the team or an individual to the Division II district tournament 17 of the past 18 seasons. That trend continued Tuesday. Freshman Ashley Meyer shot 92 to grab one of the three individual qualifying spots for next week’s district tournament. The Wildcats shot 393 as a team, just two strokes shy of advancing.

“I like how straight forward he is,” said junior Layne Voisard. “He won’t hesitate to tell you f you had a bad shot. You sometimes need that when you’re on the golf course. … He always got on me about my chipping. Now that’s the part of my game I receive the most compliments on.”

Jenna Hueker and Maria Dirksen, both seniors, started golfing right before the 2019 season started. Ahrns immediately sent them over to Seyfried’s house for some lessons.

“He helped us to learn how to golf for like an hour. It was the first time I ever golfed and it helped so much,” Dirksen said. “He still teaches us how to hit our shots, fix the stuff we need fixed. He’s super helpful.  Focus and be consistent with your shots. Same swing.”

Added Hueker: “I’ve known him for two years now and he’s always been super helpful. Every question you have he has an answer for it. He’s pretty easy to talk to. I always thought he would be old fashioned. Everything he has to say always relates to current golf.

“Don’s an awesome guy. He really knows his stuff. He’s a life lessons kind of guy. To make all the jokes he does, he’s so funny.”

How did a season’s worth of lessons with Seyfried and coaching under Ahrns turn out? Dirksen’s first round of golf ever came in Minster’s first match of the 2019 season. She shot 93 on nine holes. By the end of the season she shot 106 on 18 holes. As for the team, the Wildcats improved by 91 strokes from their first dual-match score of the 2019 season to their last dual match.

Seyfried occasionally plays rounds with Ahrns, but he gave up playing seriously five years ago around the age of 95. Now his focus is on growing the game through the youth in the community.

Despite the roughly 82-year age gap between Seyfried and the Wildcats there’s little generation gap when it comes to golf. That doesn’t mean the ‘Cats don’t have the old-school Seyfried shaking his head in wonder sometimes.

“I had a girl that would get down behind every putt, kneel and look it over. I watched her do this for some weeks,” Seyfried said. 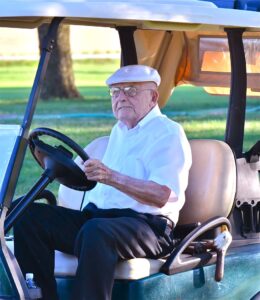 Seyfried and his wife, Margaret, 97, celebrated their 72nd wedding anniversary on Sept. 4. They met when Seyfried was on leave and was having lunch with a friend.

“She has the most beautiful brown eyes and disposition,” he said.

“I’d say moderation is key (to a successful marriage). And courtesy is another one. Do something for someone else. And don’t sweat the small stuff. We have never had an argument. We’ve had spirited discussion. But we’ve never had a knock-down, don’t-speak-to-me argument. Never. No need for it.”

Seyfried isn’t sure just yet how he’ll celebrate his 100th birthday with Margaret and their three out-of-state daughters, Susan, Diane and Maryann … especially in the age of COVID-19. Last season his mailbox was filled with more than 99 birthday cards in a project orchestrated by the golf team.

“To have a party now, it’s not productive. People are distancing themselves,” Seyfried said. “A party like that you want to be together. A lot of hugging and that sort of stuff. You can’t have that now.”

They still live in their own home and Don still drives. These days he uses a cane, sometimes it’s  7-iron, on the golf course. Seyfried gave up golf about five years ago and age 95 he was still pretty good, he said. He help found Arrowhead Golf Course in 1967. It’s the same course where two of his three holes-in-one came on, the last one about eight years ago. He got his first in Lansing when he was in his mid-20s.

“It’s not about the quality of life but the quantity. I’ve had the advantage of both,” Ahrns said Seyfried once told her. 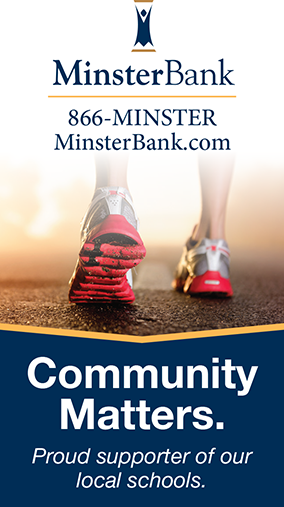 Ahrns describes Seyfried as the Wildcats’ hidden gem. But spend any amount of time with Seyfried on Arrowhead and you’ll discover Seyfried is very much a known commodity in the Minster community.

A community golfer spotted Seyfried sitting in the golf cart during the Wildcats’ practice. He came over for a greeting. He ended up getting a golf lecture, too.

“How are you playing tonight?” Seyfried asked.

“I have two doubles and a bogey.”

Quipped Seyfried: “Mike, you have to do something with that.”

As for the Wildcats, Seyfried isn’t planning on slowing down. He’s already making plans for the 2021 season.

“If she’ll have me back I’ll keep going until I just can’t stand up anymore,” Seyfried said. “I’m glad to be able to do this and grow the game of golf. This game teaches many skills that can be used on and off the golf course. Debbie and I get along just fine, very peacefully, and she has become a good friend. I enjoy the time spent very much.” 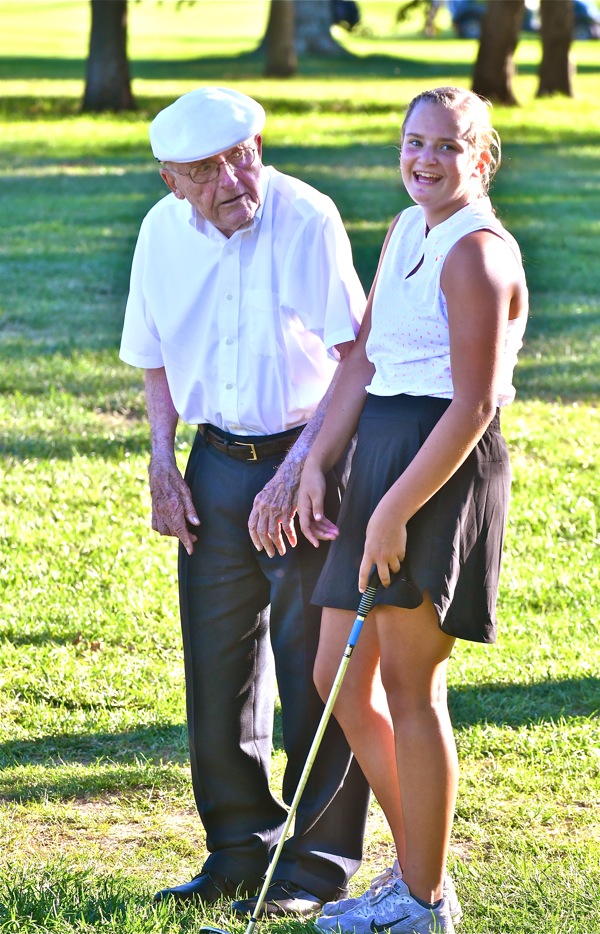 Who's having more fun? Seyfried, who turns 100 on Oct. 23, could be the oldest volunteer high school coach in the United States. This season marks Seyfried’s 19th as a volunteer coach with Minster. (Press Pros Feature Photos)