Ohio State Secondary Has Challenge To Remain “Best in America”

Defensive coordinator and cornerbacks coach Kerry Coombs has only four returning players with any kind of experience; and there is no one with the ability of first-round Jeff Okudah on the roster.

Columbus – About the only time Kerry Coombs might not be thinking about reaching the top of the heap in college football is when he’s sleeping, but you can’t keep a man from dreaming and this man has a one-track mind whether his eyes or open or closed.

He doesn’t need espresso drinks from Starbucks to get going. It’s as though he came out of the womb with a combination of blood and caffeine pumping through his circulatory system.

So why did Ohio State’s defensive coordinator and cornerbacks coach come up with “Best in America’’ during his first tour with the team rather than going global?

“Because football is played only in America, that’s why I chose that word,’’ Coombs said through a mask during a Zoom call Tuesday evening after practice.

As the saying goes, it isn’t bragging if you can back it up, and it’s a fact that every starting cornerback that has played under him has reached the NFL. The list includes Bradley Roby, Eli Apple, Marshon Lattimore, Gareon Conley and Denzel Ward.

It will be more difficult than ever to play up to those standards this season, though, with the secondary returning so few players with game experience. Leader and best player Jeff Okudah left early for the NFL and was the third player taken in draft by the Detroit Lions.

This won’t be just another season, either, with the schedule being shortened to nine games because the Big Ten was so opaque and uncertain about whether to play or not to play this calendar year. We won’t dredge that up again.

Shaun Wade, who played all over the secondary last season, is one of four DBs who played in all 14 games in 2019. He is waiting on the results of his virus testing before being cleared to practice.

“I think those kids are going to contribute,’’ Coombs said of his freshman class. “I think this season more than any other you are going to have to depend on young players and inexperienced players to fill roles. I think the big thing is having the ability to play multiple personnel groupings on defense. It’s not necessarily common in college football. I think it’s going to be ability-based. It’s going to be based on the talent of your roster, but also the healthy of your roster. You are going to have to be able to adapt to a lot of situations and those who are healthy and ready to go.’’

One of those players should be senior Marcus Williamson from the Columbus suburb of Westerville. Last season, he played in 14 games, but primarily was on special teams. He missed 2018 because of injury.

Williamson has been working at inside slot cornerback during practices. The players have yet to work out in full pads.

“We’ve all been interchanged,’’ Williamson said. “We have a lot of guys bouncing around. (Coombs) preaches versatility. I’ve been in this program a few years and have had a lot of coaching and I think I bring a lot of experience to that position.’’ 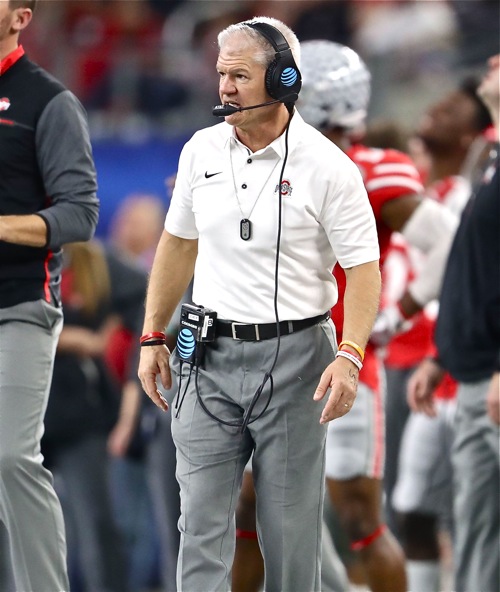 “He’s brought new life to the secondary,”  says Buckeye DB Marcus Williamson.  “He reminds you every day of why you came here.”

Coombs is Williamson’s third position coach in three years. He is excited about the change.

Shortly after head coach Ryan Day hired Coombs away from the Tennessee Titans, he told Williamson that he understood that his career “hasn’t been ideal or hasn’t been perfect for myself.’’

What made him feel a whole lot better was when Coombs told Williamson that he was still the player Ohio State recruited.

“He reminds you why you came here,’’ Williamson said. “I’m trying to reach that standard (set by the defensive backs before him).’’

Another face in the crowded secondary is junior Sevyn Banks, a junior from Orlando, Florida. Like Williamson, he came to Ohio State with knockout credentials in being ranked No. 38 nationally among all players by ESPN as a high school senior.

First, he spoke about Williamson the two-time Ohio State Scholar-Athlete.

“He has been dealt a lot of stuff,’’ Banks said of injuries. “He’s a very smart, intelligent person.’’

As for himself, he was a man of few words. His longest oratory came when asked how he negotiated with a teammate to get the No. 7 jersey.

How does he win a starting job?

When recruiting, Coombs looks for tall, athletic defensive backs. The physical part merely gets players on the Buckeyes recruiting list.

“More than anything, I’m looking for a gritty competitor, a kid who just refuses to lose,’’ he said. “He plays with a fearless mentality that my man catches no balls. That’s the mindset we have to have play in and play out.’’

It helps that high school players come from winning programs and carry themselves like winners.

“I like to recruit guys who their man doesn’t catch the ball,’’ Coombs said.

How did Coombs come up with Best in America?

All one has to do is study his past. He was raised on Cincinnati’s west side and turned Colerain High School into one of the best big school teams in the state.

Coombs grew up watching Archie Griffin and all the other greats Buckeyes. Although he graduated from the University of Dayton, Ohio State was the place he worshiped and where he wanted to coach some day.

That “best’’ tag also goes for support personnel, such as students who sanitize the Woody Hayes Athletic Center and take uniforms to be washed.

“It’s a challenge because that means it’s a standard to live up to each and every day,’’ Coombs said. “It’s not something that someone slaps it on a shirt or a hash tag and you become that. We’ve tried to hold ourselves to be accountable to that every day. I think the kids have a vision or that. They have an understanding of what’s required. You have to perform. You have to perform every day. There is a living, breathing standard to live up to.’’

For the players, it starts in the weight room and on the practice field. It’s a man’s world in which Coombs said there is no magic wand that produces All-Americans and first-round draft picks.

“You survive or you get eaten alive,’’ he said. “Kids who survive here in practice are going to be okay on Saturdays and if they are okay at a place like this on Saturdays they probably have a chance to be okay Sunday somewhere else.’’

The players are listening to Coombs closely after the Titans reached the AFC championship game.