Big Ten Cancellation Creates Flood Of Unknowns, None Of Them Good for OSU

The season, they say, is gone.  What remains unknown is whether the virus will also infect Ohio State’s robust health as the Big Ten’s dominant program and a perennial national championship contender.

Columbus – Whatever it is when it returns, whenever it returns, Big Ten football will be dramatically different.

Better or worse is debatable, but different is indisputable.

The conference presidents guaranteed that Tuesday afternoon with an announced cancellation of a league-games-only schedule that debuted only last Wednesday.

More consequential about-faces have occurred within a six-day period, but perhaps not since the creation of light, land, oceans, animals, Adam and Eve over a similar stretch.

Say this for first-year Big Ten Commissioner Kevin Warren…he certainly created a bunch of newspaper headlines for those spiffy plaques of his own likeness that festoon the walls of his office.

I’d wait to load up on Warren as a long-term investment as the successor to Jim Delany, though. This decision, unless ratified by the eventual cancellation of college football in the SEC, ACC and Big 12, Warren will wear like a bad cologne.

The stink will never leave him.

Not if there’s even a three-league College Football Playoff this year and Ohio State fans have to watch Trevor Lawrence or Nick Saban hoist a crystal football from the championship stage.

OSU loyalists have consoled themselves with fantasies of Justin Fields doing that ever since replay overruled and erased an apparent clinching touchdown in the Buckeyes’ Playoff loss to Clemson last December.

So the short-term damage is emotionally devastating, but the long-term consequences to the program are even more frightening. 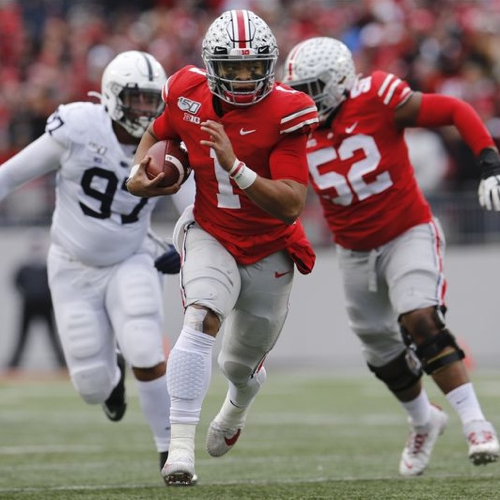 It’s likely some OSU players will bolt campus if given the opportunity to play elsewhere and better their NFL draft stock (Justin Fields, above).

It’s likely some OSU players will bolt campus if given the opportunity to play elsewhere and better their NFL draft stock.

Fields doesn’t need to do that, but he might to pacify pro teams nervous about him taking only one season of appreciable snaps since leaving high school.

Maybe lock the knife drawer before considering the possibility that instead of Lawrence or Saban showing off the title trophy, it’s Fields…only in a Georgia uniform.

Other Buckeyes who could walk onto most any roster and start include center Josh Myers, guard Wyatt Davis, receivers Chris Olave and Garrett Wilson and cornerback Shaun Wade.

All but Wilson will be eligible to enter the NFL Draft in April and are certain first- or second-round picks, so forget the possibility that any will play in the spring if the Big Ten is even serious about that notion.

Former OSU coach Urban Meyer has already said he wouldn’t advise any highly-rated player to do so.

Meyer doubled down on that Tuesday, forgetting where he was for the moment when asked on the Big Ten Network about an eventual spring season.

The same is true of OSU seceding from the Big Ten and joining another league, or playing as an independent, this season.

That is simply not in the university’s DNA nor allowable by existing television contracts.

What’s far more plausible is a significant exodus of Ohio State players elsewhere to cement their appeal to the pros.

None of them have forgotten that, one year ago at this time, former teammate Joe Burrow was likely a fourth- or fifth-round pick.

Baron Browning, Master Teague, Trey Sermon, Jeremy Ruckert, Thayer Munford, Pete Werner  and many other Buckeyes have reason to play elsewhere, and would have no trouble getting a loan against future earnings to pay their own way. 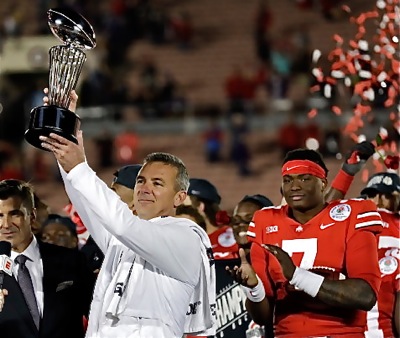 Former OSU coach Urban Meyer has already said he wouldn’t advise any highly-rated player to play in the spring.

Presumably, every OSU player would be immediately eligible because their sport is not being offered this season. That’s not a far leap from the current rule which allows athletes immediate eligibility when their respective school eliminates their sport.

That could precipitate a flood of freshmen and sophomores Ryan Day has recruited to reconsider other schools in the SEC, Big 12 and ACC that they weighed heavily upon leaving high school.

Oh, and what if Day decides having a season snatched from him at the eleventh hour isn’t something he wants to risk again and starts listening to NFL offers?

Maybe none of that will happen.

Maybe the ACC, Big 12 and SEC will yield to fear and join the Big 10 and Pac 12 in cancelling.

Even so, college football won’t ever be like it was when last played.

The new frontier of name, image and likeness compensation for athletes begins shaking the collegiate foundation in 2021.

And if you think the rumblings of player unionization that gained ground in recent weeks will go away, call the authorities immediately, because there’s a gas leak where you are.

Most people resist change because it represents the unknown.

A lot of people — all of them coaches, administrators and commissioners, none of them players — have gotten rich off the way things have worked for decades.

COVID didn’t cause the collapse of all that, but it’s the catalyst that will make it happen sooner.

What remains unknown is whether the virus will also infect Ohio State’s robust health as the Big Ten’s dominant program and a perennial national championship contender.

Bruce Hooley is a former sports editor of the Troy Daily News. He hosts the We Tackle Life sports/faith podcast with Fox NFL analyst and College Football Hall of Famer Chris Spielman. The podcast is available on iTunes and all podcast platforms.