Gostomsky: Let Us Play…And The Politicization Of The Virus

The state’s weekend order for mandatory testing buys the governor time, costs athletes time, and shifts the burden of fall sports onto those who cannot defend themselves…or live their lives.

Lest you wonder, you can’t be a writer and a shrinking violet when it comes to criticism. Too old for that now.

In fact, much of what I’ve accomplished in life has often been achieved in the face of rebuke.

So when the emails came in over the weekend questioning last week’s column about the daily dose of ‘stupid’ that government and media keeps heaping on the ‘miserable’, I found I had written some things with which a ‘minority’ of readers took exception.

One, from Oakwood, said, “You shouldn’t politicize something as serious as this virus, or the loss of life.”

Another wrote, “Taking cheap shots at the governor was in poor taste.”

That cheap shot amounted to this: “Thursday they announced that Ohio bars would not be allowed to sell alcohol at 10 pm, as if Covid wears a watch – comes out late at night.  If you aren’t aware, DeWine is from Cedarville, Ohio, as grass roots as it gets, and prone, I’m sure, to small-town emotions.  Closing the bars at 10 strikes me as a decision that was made at the hardware store, while someone opened a keg of nails!  And more inconsistency, as many of Columbus Covid-related measures are – close a ‘mom and pop’ while Wal-Mart is open, selling the same merchandise.”

Politicization of the virus?

All this happened as the state department of health issued the following order over the weekend pertaining to fall high school sports – that Covid tests must be administered 72 hours ahead of the competition and results must be in hand.

Of course it’s not clear if and when high school teams will be allowed to play. Mike DeWine has not yet announced if he thinks it’s safe to either reopen schools or play football (or other contact sports).

Two things about the order.

One, who actually believes that you could get test results back in time to show up with results in hand, and play?

And two…who pays for the tests? Rare is the family that could afford that on a weekly basis. And high school athletic budgets just don’t have the extra means. So it’s the ultimate politicization of the virus – schools have the go-ahead to play, but they can’t because they can’t make the mandate.

And yes, it’s not DeWine’s name on the order, but rather that of the Ohio Department of Health. But who does the DOH answer to? That’s right…Mike DeWine. It gives the governor the perfect excuse to say, “You see, I gave them permission to play, but they chose not to.” 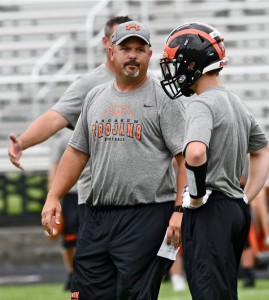 “He has no idea of the mental benefits this has for these kids. And, they get one shot at it. This is it. They’ll never get this chance at that experience again.”  –  Arcanum coach Jason Schondelmyer

Within 48 hours this did not sit well in Hometown, Ohio. In Arcanum (Darke County), the Division VI football Trojans, who finished 7-3 last year and just missed the playoffs, were practicing Monday morning, knowing full well that it might be for nothing.

“Play football?  It’s all I’ve ever wanted to do,” said senior captain, and offensive lineman, Cael Gostomsky, the picture of propriety, respect, and maturity.

“I mean…since I was a little boy I’ve dreamed about my senior year. I’ve worked hard to get this far, and I had to overcome a heart condition to play. So if we don’t get to play it’s going to…suck,” he said, struggling to find the proper descriptive.

Asked if he could meet the Governor DeWine face-to-face, what would he tell him? Gostomsky, who looks like a Marine recruit, weighed his response.

News traveled fast across the state following the mandate, and reaction was fast and heated. There was talk of petitions and organization of ‘club’ football if the state makes OHSAA organized football an impossibility. Facebook was abuzz.

“You’re telling me that if 94% of the population is unaffected, that we can’t play football because of the other 6%?” one wrote.

Another: “This is just too costly to the kids, who aren’t sick,” wrote another. “They have to rethink this.” 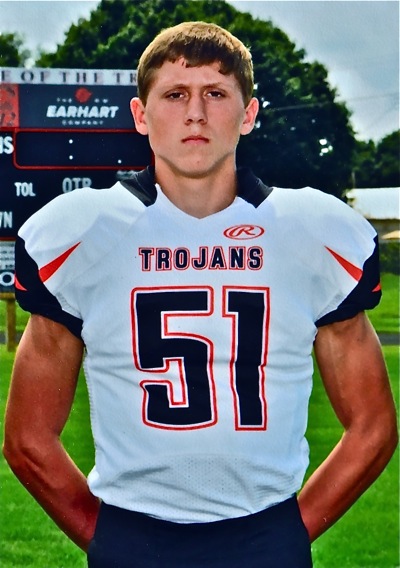 Gostomsky’s coach at Arcanum, Jason Schondelmyer, put it in the simplest of terms.

“The governor has obviously never played a down of football in his life,” said Schondelmyer. “He has no idea of the mental benefits this has for these kids. They get a sense of team, commitment, closeness, and toughness that they’ll have for the rest of their lives. And, they get one shot at it. This is it. They’ll never get this chance at that experience again. That’s why football is so special, and that’s why it’s so important.”

In the meantime, more politicization of the virus over the weekend, and this time by the governor. He’s being shown in a television commercial with athletes from soccer, the NFL, the NBA, and major baseball, and at the end DeWine comes on and says, “Hey, Ohioans, we’ve got to keep working. We’re all in this together.”

Wear masks for a while and we’ll beat this thing.

Practice social distancing, keep away from crowds, and wash your hands. And yet, he not only ratified the demonstrations and protests following George Floyd’s death, he encouraged them in the name of free speech. Three weeks later…a spike in Covid activity in Hamilton and Montgomery counties.

Shut down the bars. Don’t go to church, weddings, funerals, or christenings for a while…and we’ll beat this thing.

Sacrifice small family businesses, people’s livelyhoods, and exhaust the state’s unemployment resources for the sake of 94% who aren’t affected at all – who would rather work.

Deny the best, the brightest, and the future of our state the opportunity to experience the socialization benefits of school and sports – of risk and reward.  Tell Cael Gostomsky his dreams and hard work were for naught…and we’ll beat this thing.

Tell those that have figured it out – that many of those that test positive don’t even get sick.

We’re all in this together? He has no idea.

But he will. If there is no school, no fall sports, and no high school football in three weeks there’ll be a cry across Ohio the likes of which the governor never heard as representative, senator, or attorney general. You can’t politicize that kind of contempt and unrest – the means to an end.  It’s going to be real, and it won’t be a minority.

And if you’re offended then, don’t write me about politicization of the virus. 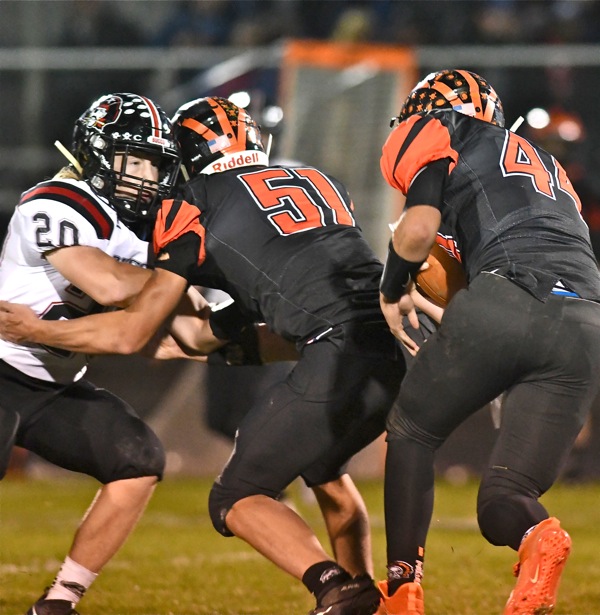 "Play football? It's all I've ever wanted to do. Since I was a little boy I've dreamed of my senior year." Arcanum senior, Cael Gostomsky (above, #51) (Press Pros File Photos)