Meeting A Hall Of Famer…Warren Spahn On Pitching

Forty years after the fact, I still have the notes from a conversation with whom many say was the best left-handed pitcher in the history of baseball.  His opinions pitching, and how to teach it, will make you shake your head.

In a cardboard box in an upstairs closet…there’s a ragged, stained yellow legal pad that’s been handled so much in forty years the edges of the pages are stained and worn.  The writing is beginning to fade – hard to read.

It’s one of three that I have, actually – my notes from the seven and a half years I spent umpiring minor league baseball from 1975 through 1982.  There’s stuff in there from the Gulf Coast League (Rookie League).  Stories from the Florida State League (A ball), the Southern League (AA), and the American Association (AAA).

There’s names of former partners, players, managers and coaches that are long-forgotten.  But at the time of my association with them back then, many had earned space on those pages…written in hotel rooms,  by the pool, in bars and greasy spoon restaurants – the accounts of minor league baseball and the people and events that made the day-to-day like a scene out of Slapshot.  In fact, there’s a notation in there about the first time I saw that movie – April 14, 1977, in Knoxville, Tennessee.  My written-down impressions:  funny, and a good way to spend a rainout day.  I sat through it twice.

But last week I ran upon a page from August, 1980...Springfield, Illinois…Springfield vs. Evansville…Springfield won, 6-4…met and talked with Warren Spahn, “hall of famer”.

Most will not remember Warren Spahn.  He retired from baseball as a player in 1965.  But in a career that spanned 25 years, principally with the Boston and Milwaukee Braves, he established himself as the best left-handed pitcher in the history of baseball.  He won 363 games, and pitched 63 shutouts.  More impressively, he pitched 5,243 innings, started 662 games, and completed an amazing 385 of those games!  He was inducted into baseball’s hall of fame – Cooperstown – in 1973.

For years after his playing days Spahn worked as a roving pitching instructor in the minor leagues, working for the Los Angeles Angels when I ran into him during that series in Springfield in August, 1980.

Springfield could be a miserably hot place in the summer, like Cincinnati and Louisville, and when it rained, it poured – like the ads for Morton Salt.  Spahn was sitting by himself in the visiting dugout during one of those monsoons, a legend to coaches and personnel from all the teams that knew him.  Evansville manager Jim Leyland stopped for a second, called him ‘Spahnie’, and offered him a cigarette, before moving on.

I introduced myself to him, and asked if we could talk about pitching.

“Sure,”  he said, without looking at me, staring off into the rain and the outfield lights.  He wore a blue denim shirt, jeans and cowboy boots, and wasn’t particularly warm and fuzzy – smaller than I would have imagined.  His prominent hooked nose, broken once by a line drive, reminded me of his old baseball cards, and his skin was tanned the color of a well-used baseball glove.  In the off-season he owned and ran a cattle ranch in Oklahoma. 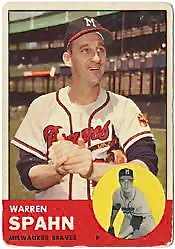 I asked:  “I know you had a great curveball when you played, and always wondered when you started throwing it – at what age.”

“When I was probably six or seven years old,”  said Spahn, still staring off into the rain.

“Well, how old do you think kids should be nowadays before they start throwing it?”  I questioned.

“Soon as you can walk,” he replied, sober as a judge.  “That stuff about hurting young arms by throwing the curveball is pure bullshit, if that’s what you’re asking.  More pitchers hurt their arm throwing the fastball than the curve.  The fastball is a more violent delivery.”

“Did you ever have arm trouble?”  I asked.  Spahn averaged 250 innings pitched a year for all those years he pitched, and pitched 290 innings or more in seven seasons.

“How did you avoid injury?”  I persisted.

“Luck, I guess,”  he continued.  “But I also threw a lot to strengthen my arm.  Back then we threw every day.  Now it’s different.  They think you’re going to hurt an arm if you throw more than 200 innings a year.  I probably threw every day from the time I was six years old.”

“Did you even think about throwing that many pitches in a game?  And would you recommend throwing that much to young kids starting out in the game today?”  I continued.

“No I didn’t think about it.  It was just another day at work,”  he said, without mincing words.  “And yes, I’d tell kids to throw as much as they can.  What happens when you lift weights?  You get stronger.  What happens when you run a marathon?  You gain endurance.  You rope a steer and you get better the more you do it.  The same thing happens when you throw a baseball.  You need to learn to throw it the right way, but throwing does not hurt your arm.”

“Why do you think so many kids hurt their arms?” 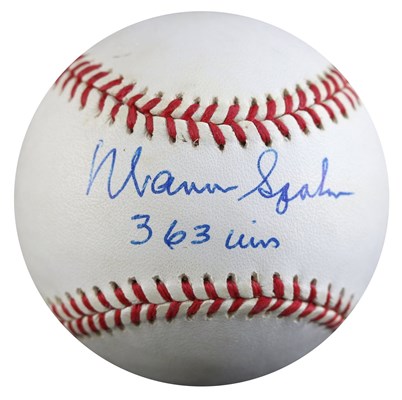 “They’re not prepared to pitch,”  said Spahn.  “They haven’t worked at it…built up their endurance.  They don’t know how to throw correctly.”

He had long, bony fingers, and when he wrapped them around the ball he was holding it nearly disappeared.  Warren Spahn’s hands were nearly twice the size of mine.

“That helps,”  he explained, showing me how he gripped and threw his curveball.  At the time he was in his 60s, and claimed he could still get hitters out, even without velocity.

He signed the baseball he was holding as he got up to leave, and handed it to me.

“Nice to see you,”  he said, flipping his cigarette into a puddle of rain.  Then he turned and shuffled up the tunnel back to the clubhouse.  When he died in November of 2003 he was 82 years old.  I wondered as I read his obituary – thought about what he had told me that night in Springfield.  I wondered if a guy who said you should start throwing as soon as you can walk…had finally quit throwing?  Was death excuse enough?

Winners Meats are proud to sponsor coverage of sports of all sorts on Press Pros Magazine. 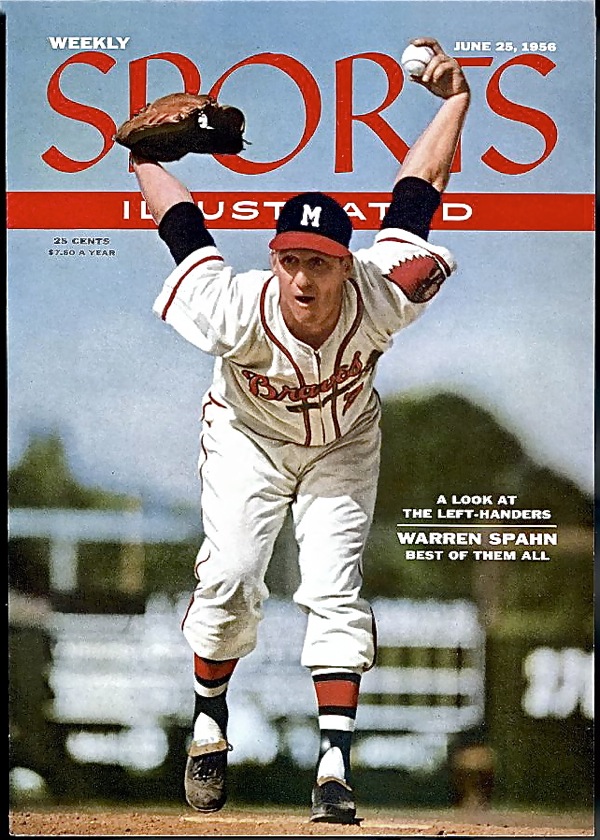 He won more games than any other left-hander in history - 363 - and even before the fact Sports Illustrated proclaimed him to be the best lefthander of them all...in 1956. (Press Pros File Photos)