The Bear Story Is True…And The Taxpayer’s Ultimate Reprisal

Some weekend commentary and catchup from those who wrote to share their own version of a funny story…and from one who wrote, “Why are we paying so much for something we’re not getting?”

When we wrote about the Minster Classic youth baseball festival on July 17, little did we know how popular and well-known the Jim Hegemann bear story was to the people of Minster and Auglaize, Mercer, and Darke counties.

Many wrote to us to share their own memories, while others wrote to say, “Thanks for a good laugh. I’d never heard that story before.”

Some, of course, wrote unbelieving. “Is that really true?” said Marie Stechschulte, on Facebook.

Hegemann’s daughter, Holly Frericks shared, “Yep, true story.” And this: “Thank you for bringing up my dad’s bear story…always makes me smile as I’ve been told many versions! I’m sure he is smiling down and laughing that people are still talking about it!”

After first hearing it, as I wrote, from former basketball coach and Minster native Jack Albers…on a fall afternoon a couple of years ago I found myself on Jack Buschur’s patio with Press Pros associate Jim Raterman and a couple more local Minster legends. There were beverages, of course, and sonuva’ gun, if that story didn’t come up again. I might have prompted it…I can’t remember.

This time it was Raterman, who worked as a teenager for Hegemann, who took up the story, with side commentary from Buschur, who for years owned and operated Buschur Electric, in Minster. Albers’ version took about ten minutes for Jack to tell; but by the time Raterman and Buschur got done it took twice as long – twice as long and twice the laughs.  But the outcome was exactly the same. Five adult men were sitting there bent over, while Buschur wiped away tears from laughing, his face red as a beet!

An additional tribute – former coach Keith Brooks wrote to share, “Heard the “bear story ” from my wife, who taught with Jack. She said he could never get through the story without doubling up with laughter. Every new teacher had to hear it. My wife heard it 19 times and said it was hilarious every time!”

To the uninitiated, or someone not from Minster, I guess it’s easy to question. But in this case, with so many first-hand witnesses…the bear story is true!

ML Dunn has literally everything in Englewood.  Call or visit for your next project.

With so much being said and written about whether local schools will open in a month…and whether there’ll be sports in the fall…people are showing their frustration with the governor, the state’s position on mandates, and the indecision over how much more of this, and how long.

Franklin County reader James Smith (at least he claimed that was his name) put his thoughts in writing this week, responding to our July 20 column (Who’s Lying About School, Sports, And Covid) with a message to Press Pros.

Wrote Smith, with obvious snark: “If local schools don’t open, and they admit that online teaching is a poor and ineffective substitute, why are we paying taxes to support that? I just paid and I’m asking the county for money back.”

He’s not alone. That same sentiment has been expressed in other local counties in west-central Ohio, even to the extent of money back for a ‘hybrid’ school (online and two days in the classroom).

“We’re paying for the complete school experience and not getting it,” said a patron in Buffalo Jack’s last week. “What’s fair is fair.”

Smith took it a step further. “Why are we paying income tax when small businesses have been closed and people struggle? Why claim so much income?”

Think this is foolish?

When the Ohio Athletic Conference announced this week that all fall sports would be canceled (Ohio Northern, Capital, John Carroll, Heildelberg, Baldwin-Wallace, Marietta, Wilmington, Otterbein, Muskingum and Mount Union), parents with kids who play sports at these schools were saying……

“Why am I paying full tuition to attend a private school and not be able to play the sport for which they were recruited? Why not just take classes online at Wright State, live at home, and save a lot of money?”

More Smith: “This is about a little bit of virus and a whole lot of politics. When he runs for re-election he’ll tell us in his preacher voice he did it to save lives. In the meantime he’s destroyed lives and business and shuts down activities in the state. Wake up, people. Quit paying for this.”

And as of yet…no word on whether public schools CAN play sports, come August. But people are watching, and calculating.

They have the ultimate reprisal. 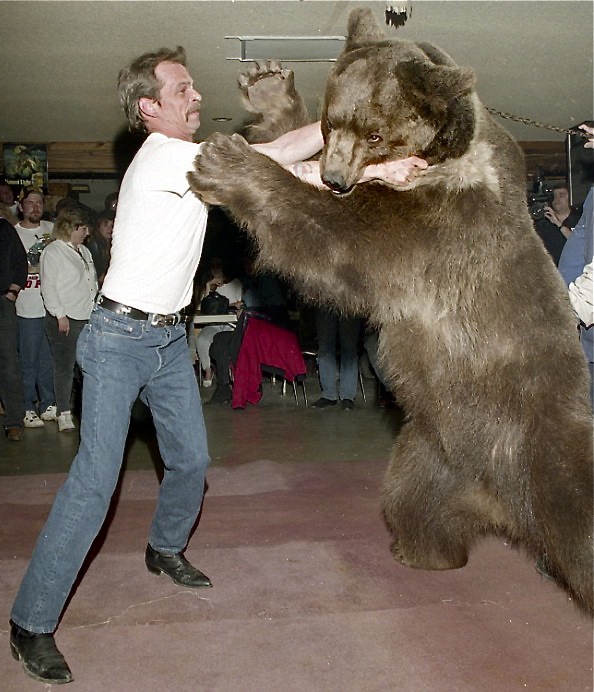 Just good, clean fun? "Jim punched the bear and before you knew it they were out amongst the crowd that had assembled to watch - many of them elderly people. Crutches and walkers were flying everywhere. People were scrambling to get out of there." - Jack Albers