After five months of scientific inconsistency and political maneuvering over a germ, I’m to the point of wanting to know, yes…and the only person left to trust is myself.

I don’t usually watch them because I’ve grown so cynical of the national mainstream media. But Sunday I had no choice as I had a lap full of bulldog, a hot cup of coffee in my hands, and the remote control was ten feet away. And worse, the TV was on NBC. I got a full facial of Meet The Press.

If there’s a more transparent moderator in America than Chuck Todd…or a guy more intent on pushing his agenda…I’m not sure who, except perhaps Sean Hannity, on Fox. And once again, as with every week, the headlines were Coronvirus, and the message from Todd was…that if we don’t mandate masking in all 50 states we’re going to die.

To help prove his point he had Dr. Francis Collins (Director of the National Institute of Health), Jared Polis (governor of Colorado), and our own Mike DeWine.

Except…hard as he tried to induce all three to say that Armageddon was at the end of the driveway, none of them rose to the bait. Todd seemed visibly frustrated.

His premise: Isn’t it time that mandatory masking be enforced on all Americans to stop the spread?

Collins: “Americans have always had their own sense of how to respond to a crisis.  “I’m sure they can figure it out again,” or words to that effect.

Polis (paraphrasing): “”It works better when people figure it out for themselves.  They usually don’t respond well to a police state-like order.” 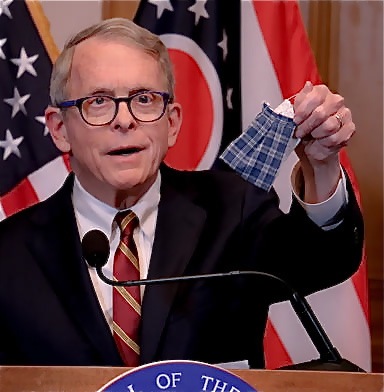 DeWine, asked by Todd if there wasn’t a total lack of leadership from the federal government: “Historically, things like this, on a state-by-state basis, have always been a governor’s call.  I have great faith that the people in Ohio will respond,” said Dewine.

The cat-and-mouse game is exhausting – wears you out. Who to believe? What to believe?

Four months ago Anthony Fauci said that masks were worthless except to people already infected with Covid. Now, he says they’re mandatory.

Schools are cautioned not to open – too risky. But yet the American Academy of Pediatrics says that the risk rate in kids 6 to 21 is almost non-existent. They’re not going to die.

But then…what about teachers, coaches, and adults at home? What about Grandma? Who do you believe for the sake of the elderly?

Well, Jack and Barbara Nicklaus admitted over the weekend that they had tested positive for Covid in March; but they had the anti-bodies. Both are 80 years old, and are perfectly fine.

But people with pre-existing conditions seem to be the ones at highest risk…as they would be if they contracted any other disease.

Here’s a thought. If 93% of the country has not been negatively impacted by the disease, why mandate masks to benefit the other 7%. If those people are at risk – aged, pre-existing conditions, or just plain afraid – would it not make sense for them to take every conceivable precaution, including masks and quarantine, to preserve their health?

Yes. That makes sense. But allow those not at risk to function…cautiously. Wash your hands, keep your distance, and avoid crowds. If they get it, they’re likely to get over it.

I’m so tired of this. We all are. People fighting on Facebook and snitching on people in the grocery store…all over masks and over whether one’s responsibility for someone else getting sick trumps another’s right to not wear one.

Enough! My personal experience during this time was one week of upper respiratory congestion back in January. And my sense is that I’ve been exposed. In fact, my sense is that 95% of people have been exposed. Because since January I’ve been on planes, trains, in terminals, in Fort Myers, Atlanta, Nashville, in crowded gyms and arenas – Ohio State, UD, Maryland, Xavier, and Indianapolis…and all I have for it is that one week of congestion.

Was it Covid? Who knows?

Do I have the anti-body? I don’t know. I haven’t been tested.

ML Dunn has moved. Check out their new location on National Road, in Englewood.

But I’m so sick of this national fist fight between politicians, media, the NBA, the NFL, MLB, and whether OHSAA schools can play come August…that I’m willing to take the risk of getting it – Covid 19. It’s going to happen eventually, because I’m convinced it’s not going away.

As for science, the doctors I’ve consulted say that regardless of age if you’re in good health, generally, you’re going to get over it without much trouble. That’s not me saying that, but rather medical doctors, osteopaths, surgeons, and chiropractors.  And I’m not naming names.

If I get over it, fine. If I don’t, I have eternity to look forward to and the promise of life without fear of another virus. But until then…I have some things left I’d like to do, and I’d like to know – like who’s LYING!

The liberals will instantly say, “It’s Trump.  He’s a pathological liar.”  But you think he’s the only one?

Remember this?  “If you like your health plan and your doctor you can keep them.”

Well, is it worse than being misled daily by NBC, CBS, CNN, FOX, and MSNBC?

Is it worse than Anthony Fauci saying one thing in March and contradicting himself in June?

Is it worse than missing weddings and funerals because they’re not worth the risk? That’s what DeWine said last Wednesday. “Is it worth going to a wedding or funeral if you bring something home that kills Grandma?”  And then:  “Isn’t it worth waiting, being patient, just a bit longer to conquer this thing?”

Sure, if you knew how much time you had.

The only person you can really trust is you. So bring it on if it’s meant to be, because I have more trust in my own immune system than a hastily prepared vaccine. Herd immunity has been with us for a thousand years – the original vaccine.

In the meantime, everything we know, own, love, and work for is at risk while we listen to Chuck Todd, Wolf Blitzer, Margaret Brennan (who’s never smiled publicly), and Sean Hannity. One of them might be telling the truth, or they all might be lying. Anything for ratings, while your life, and how you live it, hangs in the balance.