Ohio State will not play home games against Mid-American Conference teams Bowling Green and Buffalo and a road game against Oregon of the Pac-12.  And beyond that…who knows?

Columbus – Those football tickets Ohio State fans purchased to attend home games against Bowling Green and Buffalo and a non-conference game at Oregon might as well be worth Monopoly money today.

The Big Ten announced Thursday that its athletic teams will compete only in conference events this fall because of the ongoing threat of COVID-19 that has taken a dramatic upturn in infections in Ohio the last week to 10 days.

First-year commissioner Kevin Warren stressed that does not guarantee any games in any sport will be played if the statistics for the virus remain out of control.

“I am very concerned,’’ he said during a conference call yesterday.

On Wednesday, the Ivy League called off fall varsity sports with no guarantee they would be played in the spring.

The situation has been grim in Ohio.

Ohio State shut down off-season workouts for seven varsity sports on Wednesday after receiving an undisclosed number of positive tests.

Bill Landis of The Athletic web site reported that a source told him the infections for football was in single digits.

Smith was on the phone talking to the athletic directors from Bowling Green, Oregon and Buffalo and said “we’ve agreed to talk in the future’’ about possibly rescheduling each game. 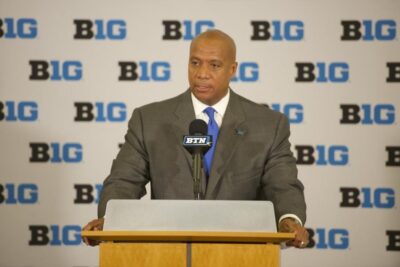 “We may not have sports in the fall…we may not be a college football season in the Big Ten.”  – Big Ten Commisioner Kevin Warren

It has not been determined whether Bowling Green and Buffalo will receive payment with the games being under contract. It’s the same situation with Ohio State’s deal with Oregon.

BG’s contract calls for an appearance fee of $1.2 million and Buffalo’s a total of $1.8 million.

The Oregon trip was considered one of the jewels nationally among non-conference games because it was a match-up of 2019 conference champions. The Ducks defeated Wisconsin in the Rose Bowl after winning the Pac-12.

This doesn’t mean Big Ten games will begin the fourth week of the season. The plan is to start playing them beginning in September in order to spread out the games as a fail-safe against virus outbreaks that diminish rosters.

The conference will begin talking about reworking the schedule next week. The Buckeyes are to begin Big Ten play against Rutgers on September 26 at home. 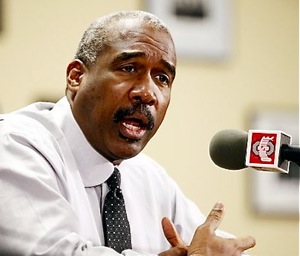 “We can be nimble.  We can adjust.  The flexibility is significant.”  OSU athetic director Gene Smith

“We can be nimble,’’ Smith said of a new Big Ten schedule. “We can adjust. The flexibility – and I can’t say that enough – is significant.’’

He’s hopeful that the Big Ten can play 10 games rather than nine.

The decision when to begin the season, Smith said, must be made soon enough to give teams a six-week preseason.

As for having fans in Ohio Stadium, Smith said that’s a big unknown because of the recent spike in infections.

Lastly, Smith said everyone could do his and her part by social distancing and wearing masks to help take down the virus numbers.

“People need to follow the protocols and give our kids a chance to compete,” he said.