After a slow start for the first two weeks of baseball in Florida and Georgia, freshman Nate Karaffa ignited in the final two weeks to portend big things for the Buckeyes in 2021.

(Ed. Note:  Andy Anders is a graduate in journalism from Ohio State University, class of 2020, and joins Press Pros this fall as columnist for OHSAA sports and at large contribution on OSU and Dayton Flyer football.  The pride of Chillicothe, Ohio, we hope you enjoy his work on Press Pros.)

Columbus, OH – Nate Karaffa’s rocky freshman year with Ohio State baseball had finally started to smooth out before COVID-19 shut down the sporting world.
In a final quartet of non-conference contests before the college baseball season was canceled, the center fielder mounted a .411 batting average, swiping two bases and scoring seven times.

Amplifying Karaffa’s frustration was the lack of summer league ball to play.

He was slated for a stint with the Chillicothe Paints of the Prospect League starting in July, but the league canceled all competition due to COVID-19 May 29.  Despite these setbacks, if Karaffa can carry forward the momentum he gathered in that four game stretch, he stands to be a key piece for Ohio State next year — whether it’s still in the outfield or at his more natural middle infield spot.

“He’s got skills, he’s very, very talented,” Beals said. “Nate Karaffa’s got a bright future we’re excited about. And once players get good, better becomes just being able to do it again.”

Noah West, Matt Carpenter, Zach Dezenzo and Colton Bauer all sat ahead of Karaffa on the middle-infield depth chart, however. But with the departure of All-American right fielder Dominic Canzone and two other starters in the outfield (Ridge Winand and Brady Cherry), there were bigger holes to fill in the back end of Ohio State’s defense.

Karaffa’s fielding range and strong arm — he also dealt a fastball that peaked at 85 miles per hour while playing for Toronto — made him a prime candidate for center, Beals says.

“Nathan’s a great athlete with very good foot speed, and we thought he was the guy most suited for being able to do that,” Beals said. “After fall ball he wasn’t the No. 1 at shortstop or second baseman, and that led us even further down that path with him.”

While Karaffa proved a versatile defender, gathering 19 putouts in 2020 to lead Ohio State outfielders and gunning down a base runner, he opened the season hitting .088 in his first nine starts – three hits in 34 at bats. 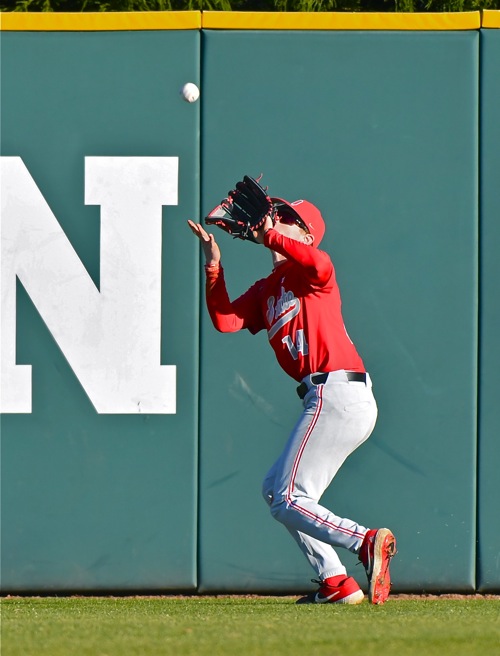 His natural position is shortstop, but Karaffa played a creditable center field in 13 games.

“It’s an acclimation process for the rookies to get things straightened out,” Beals said. “I thought he had a couple games where he swung the bat well, hit the ball hard, hit it right at some guys. He had a little bit of at-’ems. But for the most part it’s just that growing curve.”

Then, on March 7 against Harvard, the 19-year-old went 3-for-5 with two RBI, two runs scored and a stolen base.

The next day he went 2-for-4 with two more runs scored against Fairfield before earning base knocks in back-to-back contests against North Florida to close a four-game hitting streak leading into quarantine.

“I made a couple adjustments, just in the way I prepared throughout the week before the games,” Karaffa said. “Just getting comfortable and getting used to seeing that pitching every day.”

While he won’t be able to play games in the spring or summer, Karaffa said the coming months still provide him with an opportunity for growth, especially as nearby workout facilities become available again.

“I’ve had to do a lot of workouts at home, just because everything’s been closed, trying to hit wherever I could,” Karaffa said. “But now all my gyms here are opened up, and we can get on the field every day. So I’ve been in the weight room a lot and getting a lot of reps on the field.”

If he can find production at a level consistent with his final four games in 2020, he could emerge as a key cog in Ohio State’s offensive machine. Karaffa’s teammate, freshman outfielder Mitchell Okuley, says one of the former’s best qualities is that he’ll do anything to win.  He adds that Karaffa is one of his best friends off the field.

Ohio State will be looking to win more in 2021 — it followed a 2019 Big Ten title with a 6-8 finish in 2020, in part because the Buckeyes were starting a lineup that featured five underclassmen, with a majority of underclassmen depth pieces, at season’s end.

“He’s a great competitor, great worker. It’s awesome to play next to him,” Okuley said.

However, Beals said that could be in either the infield or the outfield next season. Okuley, sophomore Nolan Clegg, junior Sam Wilson and redshirt junior Scottie Seymour all return after seeing significant time in the outfield during 2019.

“I’m not ruling out him getting some playing time in center field, but we certainly foresee him coming back into the infield,” Beals says.

Karaffa and Beals both say that the key next year will be consistency. Honing in on game preparation, maintaining confidence and fine-tuning his approach are all ways to take his four-game burst at the end of this season and make it a full-season run.  It’s unclear when exactly organized baseball will reenter Karaffa’s life. But when it does, he’ll be ready to take the next step.

“He was certainly moving in the right direction [when the season ended], and there’s no concerns for us that he’ll make that curve,” Beals said. 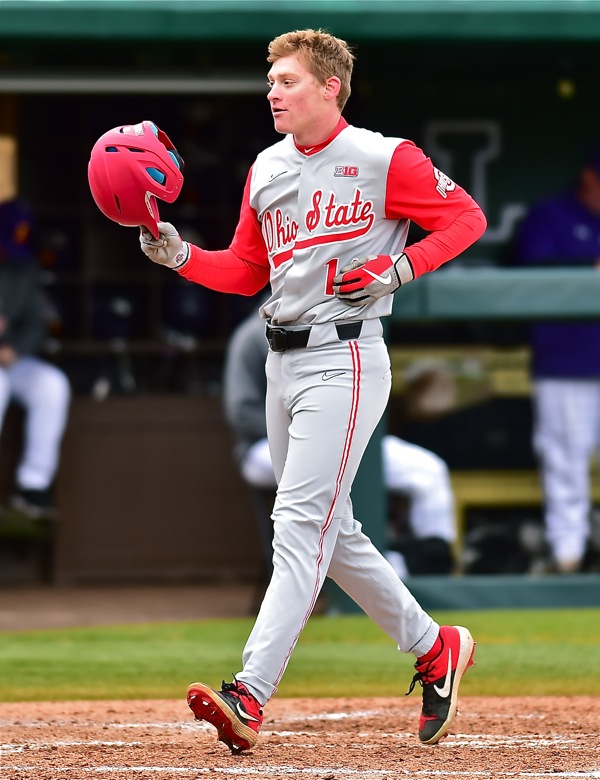