Channels, Blues, And The Mighty Mizzou….

It was as good an education as I ever got in the outdoors, and by far the best eating. How I learned the fine art of catfishing.

Of all the boyhood memories I harbor there is none more satisfying than my list of ‘firsts’.

The first rabbit I potted with my Uncle Mel’s old single-barrel 20 gauge.

The first pheasant I shot…after I learned to hit a running rabbit with that single-barrel 20 gauge.

My first Missouri quail…withstanding the chaos of a covey flush to pick out a nice big cockbird and bring it down just at the limit of shotgun range.

I remember my first fox squirrel, the first wild game animal I ever harvested, again under the tutoring eye of Uncle Mel…when I was twelve years old. And afterwards a meal fit for a king – fried squirrel, homemade biscuits, gravy, and fried potatoes.

My first frog hunt was a memorable experience. Slick, green, and elusive, little did I know that once you get beyond the looks and the slime there is no better eating wild game than a ten-inch bullfrog.

But I think…ranking near the top of my list is the first catfish trip I took with Uncle Mel and the Stringfellow boys, John and Tom, who lived and worked the farm just west of Uncle Mel’s 250 acres, outside Amlin.

Oh, I had caught some channel cats out of Shaner’s Creek, the tributary that wound it’s way southwest to northeast along the south border of Uncle Mel’s farm. And a channel cat from Shaner’s creek was a fine catch. I learned to rig up a big Eagle Claw hook with a gob of night crawlers, attach them about two feet above a half-ounce lead weight, cast that doins’ into one of the deep pools along the creek bank and wait for the bobber to eventually, and slowly, disappear beneath the surface.

“You know when it’s a catfish and not a bass, or sunfish,” Uncle Mel would say. “Channels work slow, kind of inhale the bait, and just swim off with it, nice and easy. Bass are much more aggressive. Once your bobber goes out of sight give it a few seconds before you set the hook. Then reel steadily and quickly so the fish doesn’t wrap your line around a sunken log or a bunch of roots. Get him out of there and on top of the water so you can work him in to the net.”

And the first, best, fish dinner I ever had was right there on the bank of Shaner’s Creek. The Stringfellow brothers would clean those fish, fix a batter with cornmeal and buttermilk, and deep fry those catfish fillets over a gas burner. Nothing I’d eaten before, or that I’ve eaten since in any restaurant, was ever better.

“What we’re planning is a trip up to the river,” Uncle Mel told me by phone the week prior to the 4th of July that summer. “We’ll take Tom and Johnny’s boat and catch some big cats out of the Missouri (river). Best fishin’ you’ll ever do if I don’t miss my guess. We’ll come home with a hundred pounds of fish for the freezer.”

The following week we drove northeast for an hour and put into the mighty Missouri about two twenty miles east of Jefferson City. The Stringfellows had done this before – knew what they were doing, and had all the equipment inventoried, rigged, and ready to go by the time we pushed away from the dock. The Missouri is what Lewis and Clark wrote about in 1804, and the fish they specifically mentioned living on back then…were catfish.

Within a mile of the dock we were fishing thirty feet deep in slope of the channel and trolling slowly northeast along the shore. Johnny’s rod doubled over, a big St. Croix model that he called his catfish ‘night stick’. And it took every bit of that night stick to eventually reel in a big ‘blue’ cat, ten times the size of the channel cats we caught in Shaner’s Creek. Those were three or four pounds. This creature easily went twenty pounds. 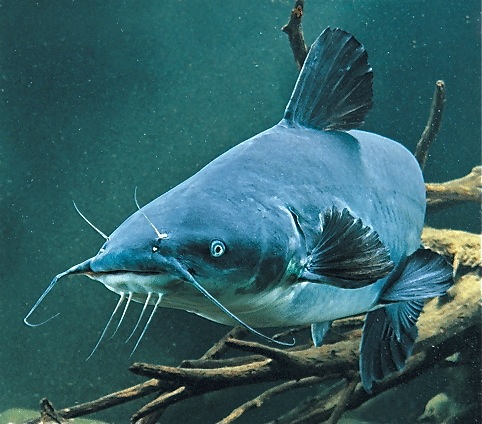 That was the first one, and the start of steady action for the next three hours. Fishing with a bait concoction that would turn your stomach, it must have smelled like caviar to those catfish. Uncle Mel soon hooked one. Tom Stringfellow caught his first one next. Brother John connected with another good one, though not as big as his first.

And then…my own St. Croix rod almost bent double and beneath the boat as something behemoth took my bait and headed for the deep water in the center of the river.

The catfish is the state fish of Missouri, and the one on the end of my line was making himself a proud token of that claim. It kept swimming and I kept reeling as line seared off the reel, making the drag squeal.

“Turn him, Tommy,” Johnny Stringfellow encouraged. “You’ve got 50 pound test on that rod. It would take whale to break your line. Keep gaining line on him and you’ll wear him down soon.”

Soon, in real time, turned out to be about twenty minutes. And while the mighty cat quit fighting as it tired, it was still a load to bring to the boat’s side. When we finally caught a glimpse of him Johnny and Uncle Mel let out a whoop.

“Good Lord, look at that thing,” Johnny bellowed. “Hand me the gaff.”

The fish turned on its side, but when it caught sight of the boat and the welcoming party it made one last lunge for its freedom. The 50 pound line held, though, and Johnny slipped the big hook beneath the fish’s lower lip and gave it a heave onto the boat.

“You’ll never catch a better one,” said Uncle Mel, clapping me on the back. “Biggest fish of the trip. What did I tell you?” 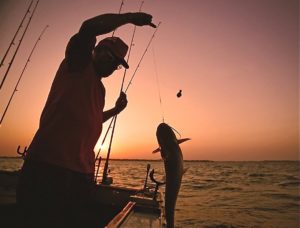 And as it turned out it was the biggest fish of the day, although we caught a bunch more and fulfilled Uncle Mel’s promise that we’d catch a winter’s supply of meat. When we got to the dock we weighed and totaled up our catch – over 250 pounds of catfish, blues and channels. Mine…tipped the scales at 38 pounds.

“You’ll never have a better day fishing for catfish,” Uncle Mel said on the drive home. I barely remember…because between the physical exertion of catching fish and a day in the sun I as bushed. It was almost midnight by the time we got home.

We iced them, went to bed, and got up early the next morning to start cleaning. The Stringfellows were wizards with a fish knife, and when they were done we had our hundred pounds of fish fillets – 122 pounds, in fact.

And my monster fish?

“Too big to be good eatin’,” said Uncle Mel. “That thing’s gonna’ taste old. And a catfish that big takes up too much wall space if you have it mounted. Besides, you got a hundred dollars to do it?

And slipped the big ‘blue’ back into the mighty ‘Missou’. 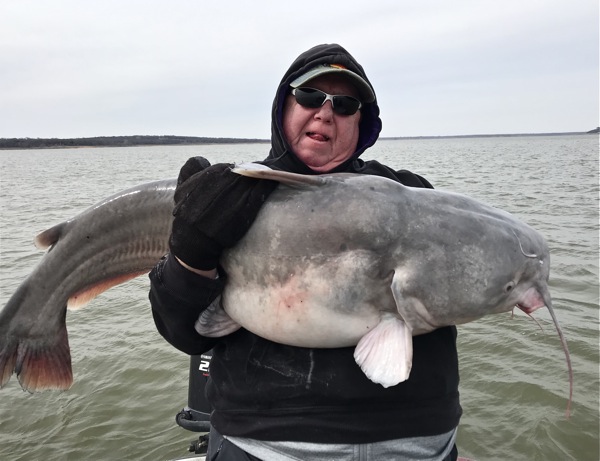 They catch 'em big in the lakes and rivers of Missouri. The catfish is the state fish of the 'show me' state. (Press Pros File Photos)