Batter Up! Area players Step To Plate For PPM Survey

High school baseball players have dealt with one bad hop after another relating to a stoppage to spring sports. In an effort to give baseball players a chance to field something different … and have a little fun in the process … PPM sent a survey to high school coaches in the coverage area. Below are some of the responses from their players to a variety of questions (As a side note, players wishing to participate in a future survey email gregbilling90@gmail.com for a list of questions).

Other than your home field, what is your favorite field to play on or visit?

• “Duke Park. That’s where I play travel ball. I have a lot of great memories there.” – Colton Francis, senior, Covington

• “Versailles High School, because they just have a nice field and nice dugouts. There’s nothing better than playing on a nice field where you know you’ll get true hops and a good game all the way around.” – Cameron Caldwell, senior, Newton

• “I would have to say that Fifth Third Field, now Day Air Ballpark, is my favorite place to play. It gives us as high schoolers a chance to play on the big stage of baseball. For each of the past few seasons Covington has been lucky enough to play on this field and it has meant everything to us as players. It really makes us determined to try and continue on with our baseball careers through high school and college so we could have a chance to make it to the big leagues.” – Avery Rench, junior, Covington

• “Playing at Fifth Third Field last year was a very cool experience. It just feels a little bit like you’re in the Reds’ farm system and trying to get to the majors.” – Evan Hoelscher, senior, Fort Loramie

What is the best advice your coach has given to you or your team?

• “To never give up, to not let the thing between your ears affect the way you play and to always have fun.” – Colton Francis

• “Going by with a few wins isn’t enough for this team. We are more than that.” – Nathaniel Arseneau, senior, Houston

What is the funniest thing your coach has said?

• “The stories he tells of what he hears from kids because he is a junior high teacher.” – Colton Francis

• “My coach is hilarious when it comes to making fun of fellow teammates. Like when he makes fun of how one of us bunts or how one of us does something. He can usually get most of us dying from laughter when he imitates someone. Another hilarious moment was when he got into an argument with one of my fellow teammates over a fidget spinner. My teammate was convinced that my coach stole his fidget spinner and my coach said he didn’t and they went back and forth about that for most of the season.” – Cameron Caldwell

• “I will always remember the one that Steve Johnson told us when he was in high school. They put laxatives in one of their friend’s chocolate bars. He ate the whole bar and he said that he was in the bathroom for the entire next period in school.” – Avery Rench

• “He makes jokes about how I was in a play this year.” – Nathaniel Arseneau

• “One of coach Sanders’ funniest comments was when one of my teammates was late to practice. This teammate said he was late because he was eating dinner. Coach said, ‘That’s the best excuse you’ve got?’” – Evan Hoelscher 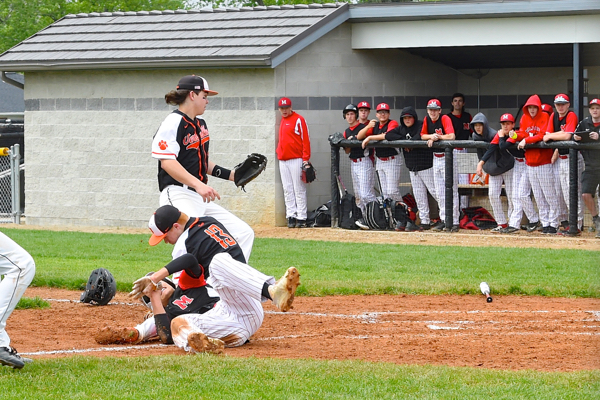 “I like to play at Versailles because they have a nice field and nice dugouts.”  –  Cameron Caldwell

What is your favorite baseball memory and why?

• “My favorite baseball memory is my junior year. We made it to the second round in the tournament and playing my heart out that was the best game we had all year.” – Colton Francis

• “My favorite baseball memory is definitely winning the conference my sophomore year and going to Florida that same year. I had a blast in Florida with my team and made many fond memories down there with them.” – Cameron Caldwell

• “My first game last year as a junior. I played on JV, and it was the first year I had played since I was nine. Coach finally put me in, and saw what I could do, but more importantly I saw what I could still do.” – Nathaniel Arseneau

• “My favorite baseball memory is watching Fort Loramie’s three state teams win state, most recently in 2018. There’s nothing more satisfying than seeing our community’s support and watching the team deliver for them.” – Evan Hoelscher

What is your most embarrassing baseball moment?

• “My most embarrassing moment was during travel ball after my freshman year. I was playing second and had an easy pop up hit to me, I dropped it but I juggled it about five times before it hit the ground. Ever since that day I haven’t dropped a pop up.” – Colton Francis

• “Probably getting told by the umpire to calm down, because I was getting so into the game and so hyped by my fellow teammates plays.” – Cameron Caldwell

• “I was on the mound in a seventh grade baseball game when I threw a pitch that was lined back to me at twice the speed. I was unable to react in time and as a result it hit me in the back of the head and gave me my first concussion. However, I did finish the game out.” – Avery Rench

• “This happened when I was a kid, but I was on the mound pitching and peed myself. Then I went home got my other pants and got back on the mound.” – Nathaniel Arseneau

“My most embarrassing baseball moment was coming off the bench in a varsity game to play first base, and immediately missing a pop-up. Luckily it was foul.” – Evan Hoelscher 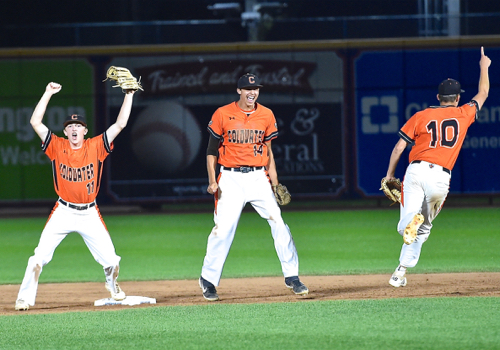 The thrill of winning…Coldwater celebrates the final out of their 2019 DIII state championship.

What is your walk-up song?

• “My walk up song would be Mississippi Queen by Mountain because the beat just gets you in a killer mood.”– Colton Francis

• “My walk up song was Speed It Up. I picked this song, because I wanted pitchers to speed it up, so I could eat it up and score runners and win games. I just thought this song was fitting for baseball.” – Cameron Caldwell

“I was on JV so we didn’t do any, but this year I was gonna choose Play that Funky Music. It just seemed like a good song to use.” – Nathaniel Arseneau

What is your nickname and how did you get it?

• “My nickname is French Assassin my personal trainer gave me that name don’t really know why but I like it.” – Colton Francis

• “CC, because my initials are CC.” – Cameron Caldwell

• “My nickname is Ace or Ace In The Hole. I received it because I was a sharp-shooter in basketball from three-point range.” – Avery Rench

“My nickname is Big Haus. I got it when I was younger because I was a little chubby and it stuck.” – Evan Hoelscher

What is the best prank you have seen pulled on you or your teammates?

• “Well I didn’t pull this prank on another player, because I’m mostly business when it comes to my sports and baseball. But one of the best pranks I’ve seen by my fellow teammates is when they stole another player’s clothes and dumped cold water on him while he was in the shower. They ran down the hallway at a hotel (with his clothes) and the teammate that was in the shower ran after him practically butt naked.” – Cameron Caldwell

• “What happens in the hotel room STAYS IN THE HOTEL ROOM!” – Colton Francis

What is your favorite baseball movie?

• “42, because it’s a true story and the movie is about how Jackie Robinson shaped baseball for the better and made it how it is today. He’s also a legend and I respect him and what he did for the game.” – Cameron Caldwell

• “Major League and Major League II. They are really fun to watch and they also give a great representation of what it is like to play for a MLB team whether they are struggling or thriving in competition.” – Avery Rench 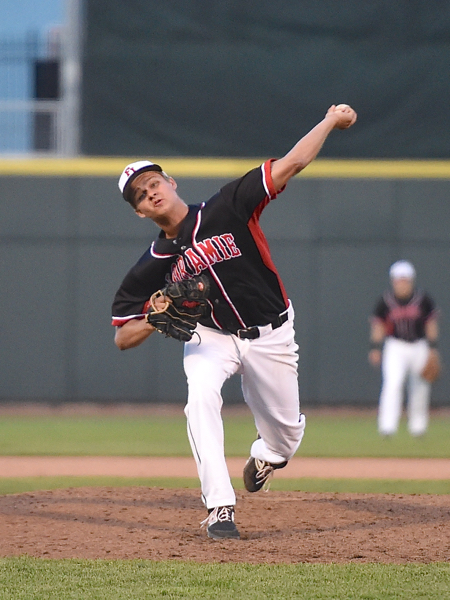 “Playing at Fifth-Third Field feels a little bit like you’re in the Reds’ farm system and trying to get to the majors.” –  Evan Hoelscher

Who is your biggest influence?

• “My biggest influence is my Dad. He was my first coach and he taught me how to love baseball. He continues to teach me even though I think I know more about baseball than him. He is my biggest fan and I just want to make him proud.” – Colton Francis

• “My biggest inspiration is my father. I play the game of baseball for him. I want to do great for him and make him proud.” – Cameron Caldwell

“My brother. He was an amazing pitcher and he taught me a lot of what I know.” – Nathaniel Arseneau

Where is the best place in your town/area to celebrate a victory?

• “The best place to celebrate a victory is at B-DUBS (Buffalo Wild Wings). You can be loud and nobody can hear you so you can just have fun with the boys.” – Colton Francis

“B-Dubs which is in the town over. But in our town it would have to be Indian’s Pizza. B-Dubs, because that’s where the whole team can go and just eat wings and watch sports and other baseball games. Indian’s because it’s got pizza and it’s in our home town.” – Cameron Caldwell

“The best place to celebrate a victory is at the American Legion in the middle of town. This means you and your teammates are celebrating a championship-caliber win and it is usually packed to the brim with community members.” – Evan Hoelscher

What are you going to remember most about playing high school baseball?

“I’m going to remember the fight that we always had and how we always wanted to win. Also how half my senior year was gone due to RONA.” – Colton Francis

• “The bus rides and all the dubs we got together and the celebrations and going crazy after winning games. I’m going to miss this game a lot and I’m going to remember a lot of things from my high school baseball days. I would give anything to have one more game wearing Newton across my chest.” – Cameron Caldwell

• “One of the best things about baseball is playing with your teammates, who are also your good friends in a small town like Covington. I will always remember the influences that my coaches have had on me. My pitching coach Steve Johnson has been a major influence on me because he has improved my pitching to somewhere that I thought it would never be.  I had always struggled with hitting in junior high, however, with the help of Andy Johnson and Nate Lavy throughout the past couple of years I have improved drastically. I hit .549 last year while on JV and I could not have been more proud for myself and my coaches.” – Avery Rench

• “All the memories with my buddy Brennan Arnold. Me and him were kinda buddies, but didn’t really become friends till baseball. – Nathaniel Arseneau 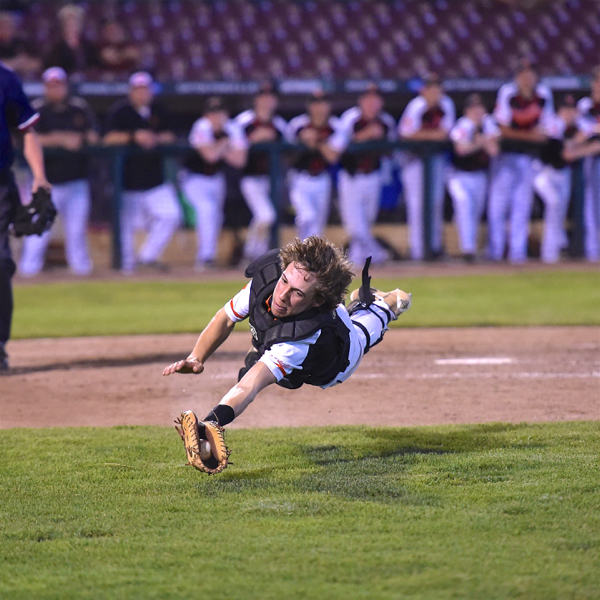 Best baseball memory? Obviously plays like this get better to tell about with each passing year. (Press Pros Feature Photos by Julie McMacken Wright)