Draft Death? Can Bengals Screw This Up…?

In the matter of drafting Joe Burrow, and whether he signs…this is not a good situation for the Bengals, who have painted themselves into their usual dark corner. And they’re not alone.

On the road this week to take in some different scenery and escape one national narrative or another…timeout for a few choice words on a subject that’s rapidly becoming tiring in ‘Bengal Nation’…which, by the way, compared to ‘Buckeye Nation’ is a few states short.

The question, of course, is whether they should draft Joe Burrow with the #1 pick in next week’s draft, and I will tell you here…being the Bengals, there is no clear-cut answer.  Greg Hoard, on the other hand, gave you his clear-cut answer in Sunday’s Press Pros feature.  Trade Burrow and accumulate additional quality picks at other positions of need.

But the Bengals aren’t going to do that, because that’s not their way.  Mike Brown loves quarterbacks.  That’s their way – David Klingler, Boomer Esiason, Akili Smith and Carson Palmer.  Kind of hit and miss, so given the history, there’s no evidence that Joe Burrow will make the Bengals a better football team, and that’s what #1 picks are chosen to do.

This is not on Burrow, by the way.  No, the onus is on the Bengals.  They own this lock, stock, and barrel.

They’ve been in the position before, drafting Carson Palmer with the #1 overall pick in 2003.  Palmer was talented, and thought of at that time with the same respect with which Joe Burrow is held presently.  And they did nothing with him, surrounding him with journeyman linemen, backs, and as it turned out…people with questionable backgrounds and futures – Adam Jones, Chris Henry, and Chad Johnson.  All were talented, but could not perform beyond the impact of their individual distraction to team success. 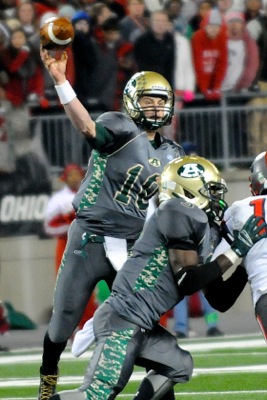 Then an Ohio State recruit, Joe Burrow fires one of his six touchdown passes in the 2014 Division III loss to Toledo Central Catholic.

Unfortunately, it’s all right there in the record, the record is recent, and it goes back to the day that Paul Brown died and Mike Brown took over management of the franchise.  And since August 5, 1991 (when Brown died), the culture of Bengals football has been one of the worst in the NFL – questionable hires at coach (David Shula,  Bruce Coslet, and Dick LeBeau), and an example of status quo by keeping Marvin Lewis too long.

They have had no success – none – over which they can brag.  Worse, what success they’ve had is so hollow, questionable.  And the coup de gras?  There are so many former players (Palmer among them) who’ve lived the Bengals experience and are willing to share…don’t go there.

Of course they’re not alone.  The NFL is full of frustrated fan bases that point to their own example of status quo within a toxic culture.

The Minnesota Vikings, for their questionable success since losing four Super Bowls under coach Bud Grant, might head the list.  I have friends in Minneapolis and to a person they speak about the Vikings in the same manner that Ohioans speak of the Bengals.  One recently said, after the Vikes’ lost to San Francisco in the NFC championship game, “We have a history of bad decisions and players with too much baggage.”  And does that not sound like the Bengals?

And don’t forget the Atlanta Falcons, the Phoenix Cardinals, the Detroit Lions, the Bears, the Cowboys, and heading the list…the Browns.  Every committed fan of these six points to the questionable culture of leadership and a willingness to adapt.  Money is not the object.  No one has spent more than the Cowboys;  and no one has spent less than the Patriots, who’ve won six Super Bowls since the Bengals last appeared in 1989.

No one, and no quarterback since Carson Palmer, has come to the league with an anticipation of success greater than that of Joe Burrow, including recent Super Bowl champion Patrick Mahomes.

If the Bengals do draft him without addressing their culture (of giving him the requisite tools for success) there will be little patience left for Burrow, or the franchise, whose attendance already bottomed out last year.  Palmer was from California, but Burrow is a Buckeye and will have the sentiment of every Ohio football fan expecting the Bengals to pay high for a quarterback while discounting the rest of the roster.  Bottom line, there are so many issues that stand between Joe Burrow and success…and not enough tackles and guards.

The Bengals stand on the familiar doorstep…again.  And while the bell rings loudly for Joe Burrow, there’s not a thing he can do to help them…if they refuse to help themselves.