Hoard: Bengals Be Smart, Do The Unpopular Thing…Trade Pick

There are those who are intoxicated with the notion that quarterback Joe Burrow will save this organization.  Uh…just ask David Klingler or Carson Palmer.  The Bengals are where quarterbacks go to die.

CINCINNATI — There are those around here who have gone a little goofy, completely forgetting that a professional football team is composed of 11 parts on each side of the field; equally important parts that fit together with precision and exact design.

The most observant recognize this in the New England Patriots, the Kansas City Chiefs and the San Francisco 49ers of today and certainly in Bill Walsh’s teams of the ’80s.

If you accept that premise, if you remember or have read about Paul Brown’s Bengals of the ‘80s and certainly his Browns in Cleveland, then you must realize that the current Bengals have one choice when it comes to the top choice in the draft, the prize for being the NFL’s worst team in 2019.

They must—without any hesitation—trade the top pick, trade the pick as a means of filling or, at the very least, improving all the glaring holes that plague them. And where among all the holes that drag them down to the bottom of the league are the most blatant? They are on the offensive line.

If that’s not the case, why was quarterback Andy Dalton so hurried and hurled around so often? Why did Joe Mixon run into a wall far more than he found some kind of a hole?

If your offensive line is such a problem, why then would a team draft a quarterback and have the expectation that that quarterback, no matter how good he was during his college career, could resurrect the team?

The player in question, of course, is Joe Burrow out of Lousiana State, who at times looked as if his talent is other-worldly. There are those who are intoxicated with the notion that Burrow will save this organization, if not immediately, that he would, at the very least, serve as the cornerstone for an improved future. 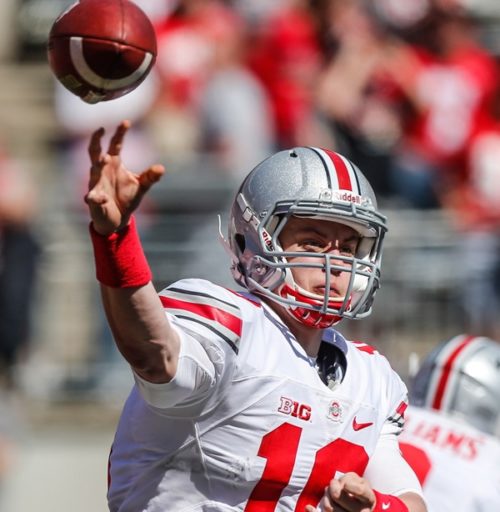 Burrow, in his brief opportunity as Buckeye…before transferring to LSU for his final two seasons.

If this was another organization, one with a track record of cultivating and developing young talent, then I would agree with drafting Burrow, handing him a clipboard and saying, “Joe, boy, when we can protect you, it’s your team. But we are not throwing you into a sausage grinder. Meanwhile, sign autographs and watch Andy Dalton get his brains kicked out.”

But these are the Bengals. This is where quarterbacks go to die. Just ask David Klingler or Carson Palmer.

The last quarterback who had a good offensive line, top to bottom, was Kenny Anderson and that line—anchored by Anthony Munoz and Max Montoya—was so good it arguably made Anderson better than he actually was, and when you get right down to it that’s what team sports is all about: the whole is better than its parts.

So, at this stage of the game, trade Burrow and hold out until some joker hands you the moon, and talk is Miami is ready to do that.

The Bengals need bodies and they need good ones at many positions, not just the aforementioned offensive line.

There are snags in this argument:

One, when will another quarterback of Burrow’s abilities come along and, you have the chance to get him;

Two, if the Bengals trade Burrow they have to make sure they are getting players who will have an immediate impact.

Therein lies the most notable danger. Many fans are sure Burrow is the answer. They are the people who buy tickets. The Bengals were hurting for fans last season. They led the league in irrelevance. In some respects, they can’t afford to alienate their fans any further, and fans don’t get very worked up over a great pulling guard.

Even in the heyday of Munoz and Montoya there were not many who were buying their jerseys.

If the Bengals are interested in winning football games, they will trade Burrow for multiple building blocks. If they want to put people in seats and sell tickets, they will draft Burrow.

Unfortunately, we probably know what the resolution will be. Young Mister Burrow best be prepared to run for his life, even if the run leads him to Canada. 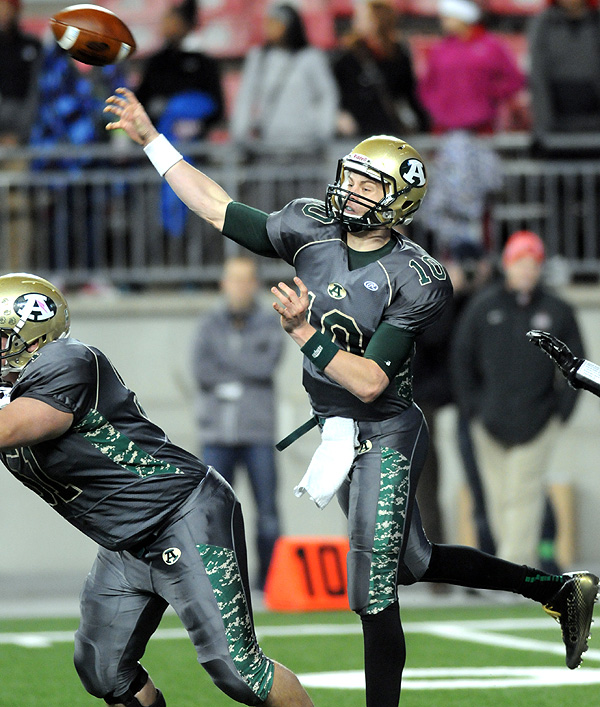