The day Elvis Presley died will long be remembered as the biggest story in America on August 16, 1977.  And in Columbus, Georgia, home of Fort Benning, it almost shut down an army base and brought a minor baseball game to an emotional climax.

It was about mid-afternoon on August the 16, 1977, when the phone rang in my motel room and a familiar voice – a friend from Memphis – shared the earth-shattering news.

“Hey, they found Elvis dead in the bathroom at Graceland today,”  said Jim Brown, a long-time friend of all the umpires in the Southern League, who made it his life’s work to let everyone know when something was going on in the league office, when something had happened at one of the ballparks the night before, or anything significant in one of the league cities.  He knew everyone’s schedule, where they were staying, and every motel phone number.  Jim was the eyes and ears of the Southern League.

It was a Tuesday, and my Double A umpiring partner, Dave Slickenmeyer, and I were in Columbus, Georgia for a late-season three-game series between the Columbus Astros, Double-A affiliate of the Houston Astros, and the Charlotte Orioles, Double-A affiliate for Baltimore.  Having worked the entire year in the Southern League, it was my first time in Columbus, a town known for little else than being the home of the biggest army post in the United States – Fort Benning.

Columbus is situated on the Chattahoochee river, and in the dog days of August it was a miserable place – a hundred degrees every day with humidity to match.  Worse, Golden Park, where the Astros played their home games, had the biggest mosquitoes imaginable – big enough, and strong enough to fly while trailing a six-pack.

Even without the mosquitoes the ballpark was depressing.  The locker rooms were little more than nails driven into the wall to hang your clothes.  It had a stale litter box smell.  The showers didn’t work.  And the lights were so bad at night that outfielders had trouble tracking a fly ball.  Because of the lights, they started games a half hour early to take advantage of as much daylight as possible.

Everybody in Columbus, one way or another, either worked at Fort Benning or existed because of it.  It was big business for Columbus.  And the people who came to the Astros’ games were usually service men (if they had a pass to leave the base), player wives, and the ‘hard-cores’.  Tickets were cheap and beer was cheap, the perfect combination for a limited budget.  Because they started the games early, they ended early, too, and the enlisted men could get back to the barracks before ‘Taps’. 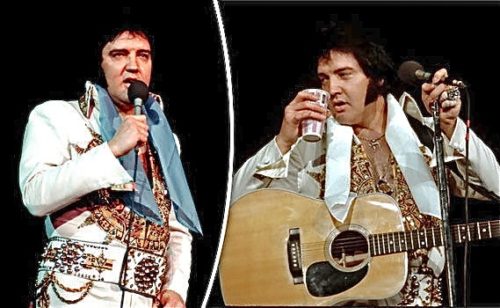 Photos from Elvis’s last concert, just weeks prior to his death on August 16, 1977.

I was twenty five years old at the time, and news of Presley’s death hit Columbus, Georgia like an atom bomb.  And on the way to the ballpark that night we stopped by a dry cleaner to pick up a pair of pants I had dropped off earlier that morning.  The dirt at Golden Stadium was bright orange, it had rained the night before, and there was no way to get those red stains out of my pants by washing them.  They had to be dry-cleaned, but by the time we got there at the promised 4 pm pickup the cleaners were closed with a sign on the door that read, CLOSED DUE TO ELVIS DYING.

Thankfully, we each had extra pants.  And when we got to the park the only people there were the teams taking batting practice.  There were no fans, no service men, barely cars on the streets.  Everyone was home watching the news about Elvis.  Some of the Latin players for both teams didn’t know who he was, so the American players were trying to explain.  Orioles manager Jimmy Schaefer said he spent more time that day telling his largely Latin roster about Elvis than he did making out his lineup.

By game time a few of the hard core regulars had finally made their way into the park and the public address announcer was working the Elvis angle to the hilt, playing one tear-jerker after another instead of the usual ballpark tunes between innings.  In his honor they also discounted beer sales, and by the third inning the half-price brew was kickin’ in and some of the Elvis ‘hard cores’ could contain themselves no longer.

In the middle of the seventh, instead of playing Take Me Out To The Ballgame, they played Elvis singing Can’t Help Falling In Love With You.  A very large woman sitting above the first base dugout started wailing her grief, “It’s not so…it’s not so”, over and over, attracting what park personnel there was to check on her condition.  What they found was her suffering from too many Pabst Blue Ribbons.

I was working first base that night and Astros catcher Bruce Bochy – yes, that Bruce Bochy, who rarely, if ever muttered a word – singled in the bottom of the seventh.  Standing on first base, he turned and said to me, “Geezus, I’d rather be in A ball than listen to this.”

It was get-away night and Slickenmeyer and I were scheduled to drive to Chattanooga immediately after the game.  The problem being…how to get my pants from the dry cleaners?  Which I never did, by the way.  After the season I contacted the league office, who contacted the cleaners, who sent them to league president Billy Hitchcock, who mailed them to me in time for spring training in March.

Bottom line…every word of this is true, give or take forty years, and I cannot hear Can’t Help Falling In Love, or drink a PBR, without thinking of that woman who sat behind the first base dugout.  I, baseball, and most of the rest of us got over losing Elvis in the usual manner, if not with added respect for his unquestionable talent, his legend, and career.

The wailing woman?  I’m not so sure.