Why I Say ‘Yes’ To Seven-Inning Doubleheaders….

Major League Baseball is toying with the idea of playing seven-inning doubleheaders, if and when they get back on the field, to make up for lost time and lost games (translation:  lost revenue).  I agree with very little that Rob Manfred does, but here’s why I’d willingly say yes…this time!

On his personal website yesterday (HalMcCoy.com) my friend, mentor, fellow Yuengling drinker, and spokesman for Monte Cristo cigars,  Hal McCoy wrote:  “Say no to seven-inning doubleheaders, please.  Seven-inning games are like slow-pitch softball, and maybe that’s apropos because today’s game is about the home run…resembling beer league softball.”  Pitchers arms will fall off – words to that extent.

Where it comes to baseball, beer, clouds of cigar smoke, and country music there’s very little with which I can find to disagree with Mr. McCoy, who mimics another hall of famer, George Jones, incredibly well.  Mostly, when we talk baseball I just keep my mouth shut and nod yes.  Hal, you see, has flown first class on the subject for about 50 years, while I’ve always had the last seat in coach.

But on the subject of seven-inning doubleheaders I’ll share why it’s not only a good idea, but it makes for a far better baseball game.  And if the commissioner wants to do it to allow for lost games, I say do it.

Remember now, I called balls and strikes in the minor leagues for almost eight years – rookie ball to Triple A – where seven-inning doubleheaders were as much a part of the culture as ball girls that didn’t pay attention.

To Hal’s concern about adding pitchers to the roster – that their arms would fall off – my personal experience was that the seven-inning games went much better in regards to the back end of those games.  If the starting pitcher was good (and 70% of the time it was, especially in Triple A) that meant that he would pitch at least through the fifth or sixth inning, leaving just an inning or two for the bullpen to manage.  That was good, because just about every team had at least two consistent arms that could finish out a game.  There was no such thing as trying to mix and match for three-plus innings.  Mostly, just get to the seventh inning, bring in your closer, and let him throw 95 for the last three outs.  Remember now…I saw it first-hand, and it worked.

If baseball is actually better at the major league level, that formula should work even better.  The only wrench in the gears would be if your starter can’t throw strikes or get anyone out.  And if that’s the case it doesn’t matter how many innings you play.  It’s going to be long, and it’s going to be bad.  So actually, I can swear to the fact that with seven-inning games you need less pitching, instead of more.

Second, if you play two seven-inning games that amounts to 14 innings of baseball, and if you’re a baseball geek like me and Hal…14 innings is better than one 9-inning game every day of the week.  Plus, if you’re worried about running out of pitchers, and length of game, the risk with two 9-inning games is much, much greater than it is with seven.

I actually kept a diary of most of the games I worked back in the day…and the average 7-inning game was over in two hours, sometimes even less.  Again, it’s the last three innings of a game where the pace bogs down, and that’s why MLB wants to institute the rule that says a reliever now has to pitch to at least three hitters.  And when the back end of those games goes bad for lack of pitching baseball can become a labor to watch.

But seven-inning doubleheaders allow for a quicker end to the first one…and a fresh start with a rested pitcher for the second game.  And again, in today’s baseball pitchers are much more apt to maintain their effectiveness deep into seven innings than they are for nine.  Call it ‘wuss’ baseball if you want, but that’s the way it is – how the game has evolved – and we’ve incentivized this trend by paying too much money for specialists. 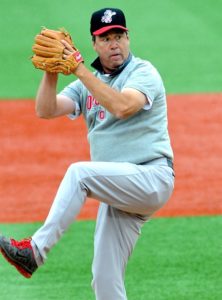 I think we can all agree that 14 innings of baseball is enough for one day;  and to go home with the satisfaction that you got to see two games instead of one is actually a pretty good return on investment.  That is, if it’s priced right to begin with.  And by the way, the last thing you ever hear MLB talk about is ‘value’ when it comes to a baseball game.  In fact, I’ve never heard it mentioned.  And a playground for the kids, or babysitting under the stands, is not part of the value of taking your family to the ballpark.

Now there’s still a lot that I don’t like about modern baseball – things upon which Hal and I do agree.  I hate aluminum bats with a passion…I hate the designated hitter…I hate that no one wears stirrup socks anymore…I hate alternate uniforms…I hate security guards standing on the warning track between innings…I hate replay reviews of umpires’ calls…I hate pre-game shows and too much analysis…price gouging for concessions, and $10 beer.  There’s no way a self-respecting fan from St. Henry would pay that.  And, I hate games that start before 7:35 pm.  Call me the Larry David of baseball if you want.

But where seven-inning doubleheaders are concerned, they’d be doing the fan a service – the poor schmuck who’s been getting gouged for years.  It’s time for a little return on investment – for value over volume – everyone goes home happy.

And maybe they’ll come back.