How You Spent Your Saturday Night…And How I Spent Mine

Most probably didn’t mind being quarantined indoors because of Saturday night’s cold temperatures. And like you, I stayed warm, too…but with an eye on a fruitful future.

My biggest issue with the weekend wasn’t the coronvirus, but rather, with the cold overnight temperatures on Saturday night that dipped into the low 20s.

Not that my house was cold. I threw enough oak and hickory into my wood-burner in the den to keep things at a toasty 74. No complaints.

No, the issue was how to keep my peach trees warm; for you see, besides publishing Press Pros, and keeping up with too many other projects I can’t resist…I have for years grown apples and peaches in a small orchard in my back yard.

A lot of work, you ask? Exactly, given the amount of pruning, spraying, and disease prevention necessary just to pick an apple of your own growing come October.

And peaches are even more work, because a warm February can swell delicate fruit buds prematurely, making them susceptible to March and April freezes. And that, not corona, or Saturday Night Live (which has sucked since Will Ferrell left) was how I spent my Saturday night.

You can rightly ask if it wouldn’t be easier just to buy peaches from a retailer in August. And some years you have no choice. Last summer I brought home two bushels of Pennsylvania peaches from Gettysburg when I was there in August shooting magazine covers. My own crop had been lost on the night of April 14 when the temperature hit 21 degrees…and the trees were in full bloom.

It’s hard to irrigate peach trees for frost protection when you only have a half dozen, like you can with strawberries. And there’s really no way to cover them with some kind of blanket or tarp when you have that many. No…what I do is build fires between the trees, and trust those fires to raise the temperature enough to save the blooms. 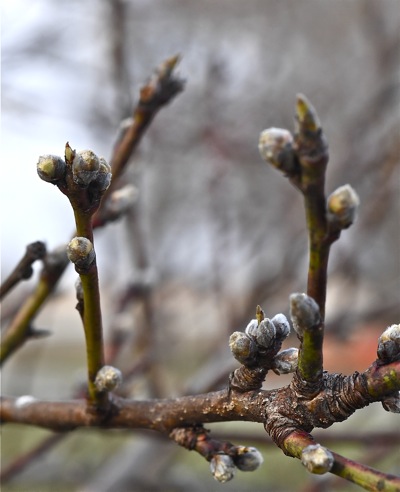 What we’re trying to protect…each one of these buds contains a peach blossom, which in turn contains a tiny peach. They freeze easy when this exposed in March.

It’s kind of like spinning a bunch of plates. You spend most of six hours – between 1 am and 7 am – putting firewood on each of those fires. With a little luck you’ll have some wind, as well, which tends to move the heat around, like ceiling fans do inside the house. It must be an odd site.

A couple of people driving by at 2 am (why, I don’t know) actually stopped to ask what I was doing. When I told them one of them asked, “When will they be ready to pick? I’d love some when they’re ripe.”

“Really?” I said. “Well park your car and get out here and help me move wood from that pile behind the barn. It’s called sweat equity.”

He smiled, shook his head, and sped off down the road.

It’s not easy to raise peaches in Ohio. Apples are a better bet, because they bloom later and they’re more hardy to begin with. And it’s really hard to protect them by any means in April, once they’re out in full flower. Right now it takes 20 degrees for thirty minutes to kill peach buds. In April they’ll die at 28 to 30 degrees, depending on the humidity. So it’s now or never for this year, and the forecast for the next three weeks (Weather.com) is pretty good – upper 30s for lows on most nights. If…I get through Saturday night! 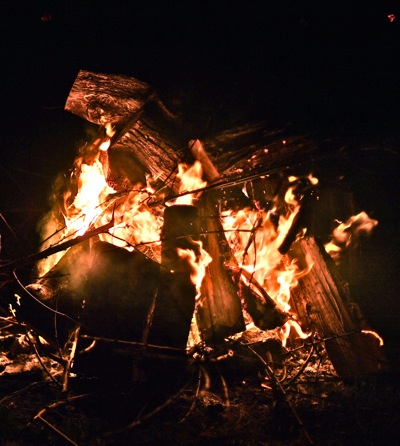 Does it work? If conditions are right…it helps. But no guarantees.

Besides a cord of firewood per night, it takes about three pots of black coffee and re-runs of the World Series taped from last October. I also set an alarm on my phone as a reminder to go back out every 45 minutes and rekindle the fires. That fourth and fifth hour is murder – hard to stay awake.

If you think I’m nuts, that’s fine. There is, after all, only so much you can control and failure is an option in this case, but not a certainty. My dad used to say, “But if you don’t try failure is a certainty.” So shake your head if you want.

Just don’t stop at 2 am and tell me you’d like to have some fresh peaches in August. I have a memory like an elephant, and a map to the best peach farms in Gettysburg.  That…I’ll gladly share, as I will this.

It got colder than expected on Saturday night – the chill factor at about 20 degrees with a slight breeze.  When I looked at 11 am on Sunday I found some dead blooms, still contained in the buds.  They won’t be out for at least another ten days.  And did I save any?  Don’t know that, either, despite having bonfires roaring that were four feet high.  All I can say is this.  I only get a peach crop about once in five years.  So… 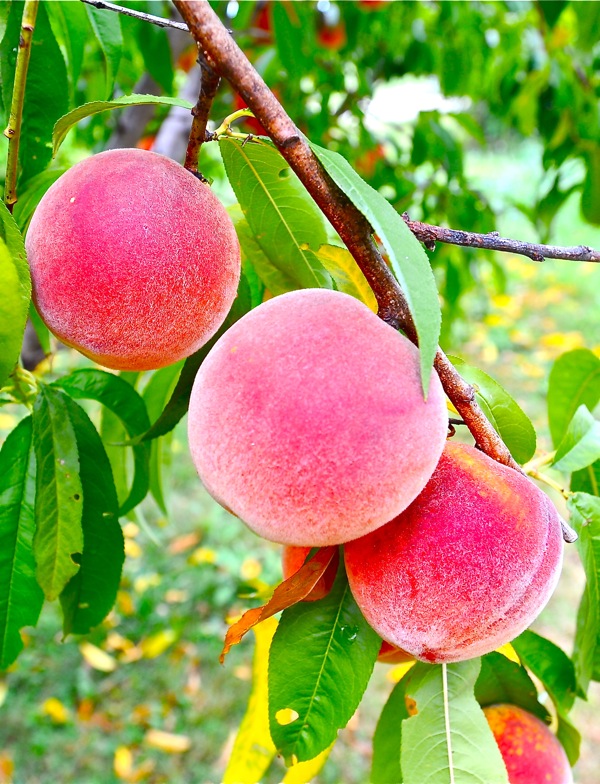 The last time I actually survived the spring freezes to pick peaches in August was in 2016. A lost night's sleep in March is worth the effort. (Press Pros File Photos)