At least once a year Uncle Mel would summon me to the farm for what he called a little off-season sharpening of the eye…and man’s way of keeping the balance of nature in place. I just called it…crow hunting.

March always brings back some fond memories of hunting. No, not for rabbits, and squirrels, or pheasants and Missouri quail.

You see, all of those upland species of game were long out of season by the time March came around.

But for a kid weaned on hunting and the outdoors March also meant sitting in the house with nothing to do – too early to fish, and too late to hunt. It was this very case of ‘cabin fever’ that I once complained of that made my Uncle Mel spring into action.

He lived with my Aunt Floy on 250 acres of prime bottom land in central Missouri, about a two-hour drive from my home in Columbia. My mom’s oldest brother, he had taken a liking to me at an early age because my two siblings were both girls and Uncle Mel was at that time morbidly afraid, I guess, that I’d grow up playing with dolls.

Anyway, by age six he was taking me to the farm for long weekends and holidays, where he taught me about farming – cattle and hogs, corn and wheat – and Aunt Floy always had about two dozen laying hens that stayed in a small chicken house between the house and the barn.

But the thing I learned that had the greatest life impact on me…was about the gifts of the outdoors. Uncle Mel’s farm was rich in wildlife – deer, squirrels, rabbits, and ring-neck pheasants. And in those days every Missouri farm with fence rows and grassy fields boasted a healthy population of bobwhite quail.

In addition, he had an acre-sized pond stocked with bass and bluegills, and Shaner’s Creek bisected his property and served as a border with a neighboring farm, where the Stringfellow brothers raised beef cattle.  It teemed with channel catfish and sunfish. Above everything else I learned from him, Uncle Mel taught me the joys of hunting and fishing…and a respect for the conservation and management of wildlife. 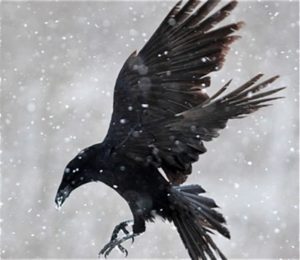 So it came that during his weekly phone conversation with my mom in the winter of my sophomore year…I complained to him about nothing to do, and about how much I missed shooting.

“Spring break’s just a week off, isn’t it?” he asked. “How would you like to come down and do a little crow hunting? It’s a lot of fun and it’s helps keep those ‘sky carp’ thinned out.”

Uncle Mel thought of crows in the same way he thought about raccoons. To him they were both a natural nuisance. ‘Coons raided pheasant and quail nests, eating the eggs and and diminishing numbers of would-be birds for the coming fall hunting season. And they were death on his sweetcorn patch come July and August. Outside of distemper, they had no natural enemies or means of limiting their numbers, other than hunting, so he was all about doing his part to balance things.

And crows, he thought, were almost as bad. A healthy population of crows cost him at least a hundred bushels of corn a year, he reckoned. But he also believed that crows spread disease through their droppings under roosts…to animals and people if they came into contact. And, he had a superstition about crows being a harbinger of bad things to come. Crows, he would tell me…needed to be kept in check.

The way he would do it was put up an owl decoy in a tree down by the creek, then use a crude call to signal distress from a member of a local crow flock. I still have that Holt’s crow call that he used for years.

The trick was to lure one in, shoot it, and leave it as evidence to other crows that they were all threatened – that they needed to come and drive the owl (decoy) away. On a good day you could shoot two or three dozen before the action ceased and the birds wised up; and crows are a very wary, and wise, animal. 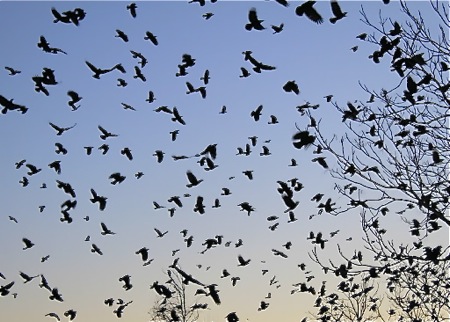 In matters of hunting and wildlife there was no one better than Uncle Mel.  Within minutes the sky was full of crows responding to his distress call.

In matters of wildlife and hunting there was simply no one better than Uncle Mel. He picked me up on Saturday after the last day of school and spent the rest of the day and night planning the following day’s hunt. No duck or goose hunt was ever more meticulously plotted. He’d get out the little Winchester 20 gauge single shot, a Model 37, that I used to shoot rabbits and squirrels, and he always had plenty of shells handy that he purchased at the general store up on route 12…#6 shot.

Aunt Floy wasn’t crazy about it – shooting on a Sunday – but Uncle Mel would explain that killing a few crows was no different than fixing the fence. It’s something that had to be done for the sake of the farm. We walked about a half mile back from the barn, into last year’s cornfield, where it bordered a woodlot, and set up the owl decoy in walnut tree. Then, we separated, about forty yards apart, so as to have more than one shooting lane, depending on the direction the crows came to the decoy. At his signal I pushed a shell into my gun…and he started blowing on that call. 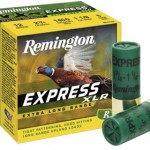 It was a cold, blustery day, with snow flurries in the air, but within minutes we had action. Ones and twos responded to the distress call that Uncle Mel was sending out. When they saw that owl sitting in the tree they left little doubt they meant business, buzzing back and forth trying to drive him off. All the time he kept blowing the call and more and more crows were suddenly in the air, trying to locate the threat.

Boom…I leveled the little 20 gauge on a hovering target and it collapsed in a shower of black feathers. Within moments the sky was black with them.  Uncle Mel was speaking his own medicine with a Model 12 pump gun…boom, boom, boom…and for about ten minutes the sky was full of arriving and departing birds. The more we shot the more upset they got, and the more aggressive they became.

Within a half hour they became wary, and just as suddenly as the action started it was over with equal alacrity.   Crows, as I said, are smart creatures.

We picked them up, collecting enough to fill two bushel baskets – probably about twenty – and I wondered if we were actually going to clean them, like we did other gamebirds?

“Heavens no,” he laughed. “We’re not that bad off that we have to eat crow.”

Instead we took them back to the barn where he took his tractor and front-end loader and quickly dug a hole and buried them.   Uncle Mel called it a good day.

“Well, we thinned the flock a bit, but probably not near enough, Tommy,” he laughed.  “For every one we killed there’ll be two more take its place come nesting season. We’ll have to do this again next year.”

And we did for several years – our March ritual when it was too late to hunt and too early to fish.

I never had more fun on a Sunday. 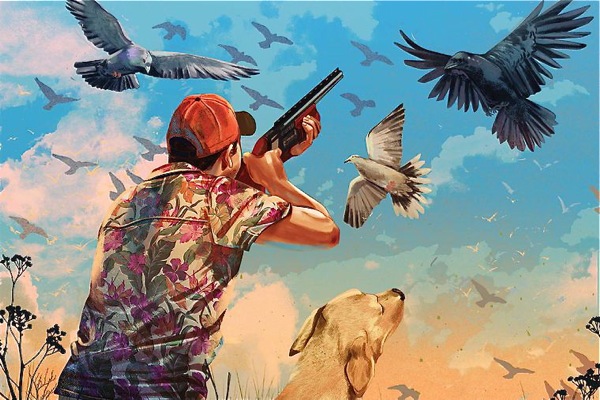 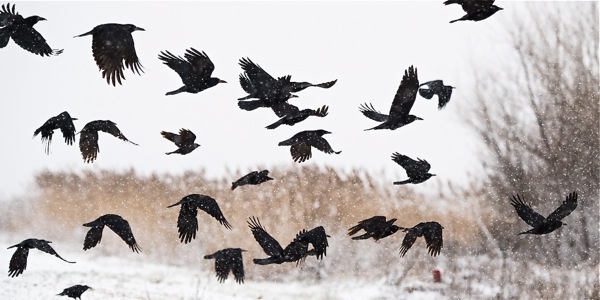 He figured crow hunting to be a good way to keep your shooting reflexes sharp for upland game...and a way to improve the yield on next year's crop. (Images Supplied by The Author)