On a night when most of the national news was bad, it turned even worse for the Anna Rockets in the second half of their D-III regional matchup with Stivers.  It ended up ‘cancelling’ their tournament hopes.

Dayton, OH – There were a lot of unhappy people in UD Arena Wednesday night – those that were there. No attendance figures were shared, but there couldn’t have been more than two hundred.

Wednesday was the first night of the Mike DeWine kaputz on school communities coming to the state tournament games to cheer on their local teams.  As it was, each Anna player was granted tickets for four family members – fifteen players times four, plus essential district personnel…so you do the math.

And from those we questioned there were a whole lot more unhappy people back home, thank you Mr. DeWine. 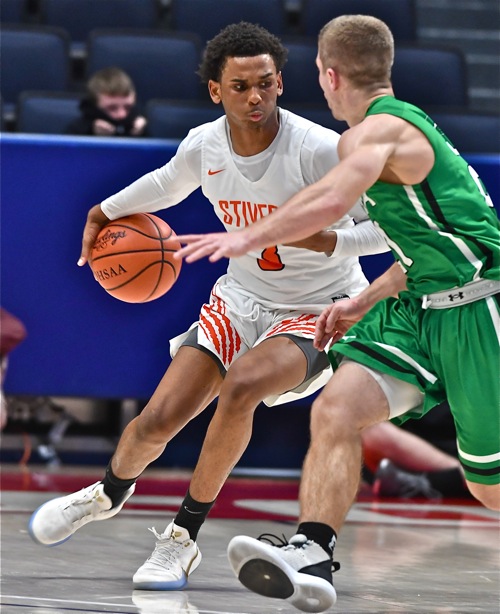 Stivers’ Trevon Ellis proved tough as tough can be…19 points, 12 rebounds, and 3 assists.

Another offered, “Can’t believe the OHSAA has done this to the kids.”

Yet another:  “A lot of people will remember this.  We won’t forget.”

What the Anna fans would like to forget, however, is the worst possible bad news in tournament basketball…that being, jumping out to an 18-4 first quarter lead, totally outplaying an opponent (Stivers), then seeing that opponent outscore you 67 to 45 over the next three quarters to win, and end your tournament hopes, 71-63.  Because in order of quarters, that exactly what Stivers did:  19-14 (second), 19-19 (third), and 27-12 in the fourth.

“We had a good game plan going in,”  said Anna coach Nate Barhorst.  “We wanted to keep them out of the paint and we started out great.  We contested shots, we shot well from outside, we got transition baskets, we ran the offense like we wanted to…but we knew that they were a team that wasn’t going to go away.  They’re here for a reason.  They came out in the second half and said we’re taking it to ya’, and you can’t stop us.”

It was a game of runs, to be sure…Anna’s 18-4 burst out of the gate.  Then, Stivers would come back in the second quarter to cut the halftime margin to a very manageable 32-25.

And Stivers had a guy named Trevon Ellis, a mercurial wing player who picked up a frustration technical in the second quarter…and seemed to use it for motivation.  He can fly, he can jump, and he can score in the paint, all of which he did from the middle of the second quarter on, finishing the game with 19 points.  He proved to be unstoppable in the fatal fourth quarter. 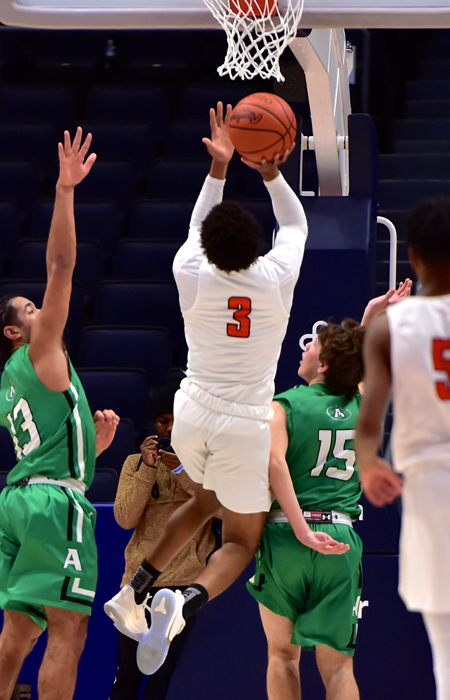 The idea was to keep Stivers out of the paint and away from the basket. They couldn’t.

Bart Bixler, on the other hand, was as good – as competitive – as he’s ever been in four years at Anna.  The 5’9″ senior scored 32 points on 14 of 18 shooting, complemented by fellow senior Kam Steward, who had 15.

But the second half turned into a foot race – a scoring race – that forced Anna to match Stivers’ quickness, depth, and once they started hitting shots…they had to match Stivers point by point.  They couldn’t.

Shots that fell in the first half suddenly didn’t.  A game of runs, Stivers kept whittling away at that 7-point halftime lead.  They got it to 5, then 3, then 1…and at the 5:03 mark of the third quarter they went ahead, 38-37.  Anna would retake the lead on a Bixler three-pointer…then go on their own 10-point spurt that took them to the end of the third quarter with a 51-44 lead.

But Stivers kept pushing the pace, playing faster, and edged closer with each possession, finally taking the lead for good at the 3:33 mark of the fourth quarter…61-58.  The Rockets at that point simply ran out of fuel.

In order of possession…Riley Huelskamp was stripped on an inbound pass under the bucket, and Stivers (Ellis) scored.  Isaiah Masteller rushed and missed an open layup.  Then a bad three-point shot attempt.  Bixler was rejected on another layup attempt.  You get the picture;  and all the while Trevon Ellis and teammate Allen Lattimore (18 points) were taking turns scoring on the Stivers end.  The lead grew…the clock dwindled…and as time expired Bart Bixler simply bent at the waist just to get his breath – exhausted. He, and the Rockets (22-5), had come to the end of the road. 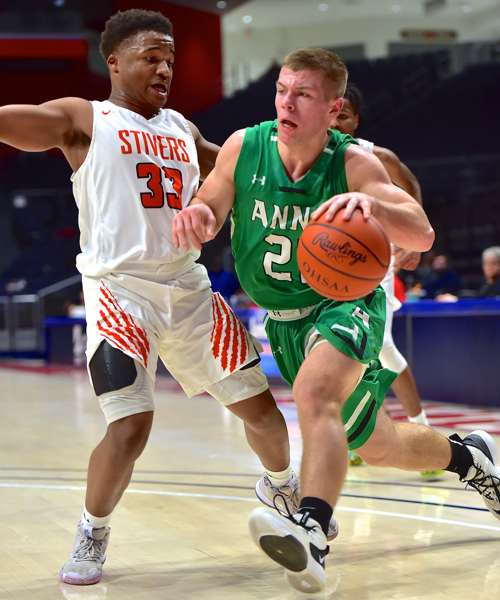 Riley Huelskamp capped his Rocket career with 7 points and 8 assists.

“When we quit hitting shots in the second half they kept coming down – it seemed like every possession – I don’t know, the last four minutes of the fourth quarter, [they were] just scoring at will.  We just couldn’t recover after they retook the lead.  I don’t know, maybe fatigue set in a little bit on us at the end.  They were rotating people a lot more, and we can’t have our ball handlers off the floor for very long, if at all.  But we played that way all season…just not at that pace.

And if he (Barhorst) had a mulligan, would have done anything differently?

“Yeah, probably would have done some things differently in the second half, defensively – maybe double Ellis a little bit more,”  said Barhorst, quietly.  “Or at least send someone to get the ball out of his hands.  If I could do it again that would be it.

“You can’t hold the ball against their pressure.  They sped the game up, we got some layups here and there to keep us in the game a little bit, but it’s hard to slow it down against a team like that.”

Anna finished 22-5 with Bixler’s magnificent encore (32 pts), while Kam Steward scored 15, Riley Huelskamp had 7, McKane Finkenbine had 5, Masteller and Isaac Lininger with 2 each. 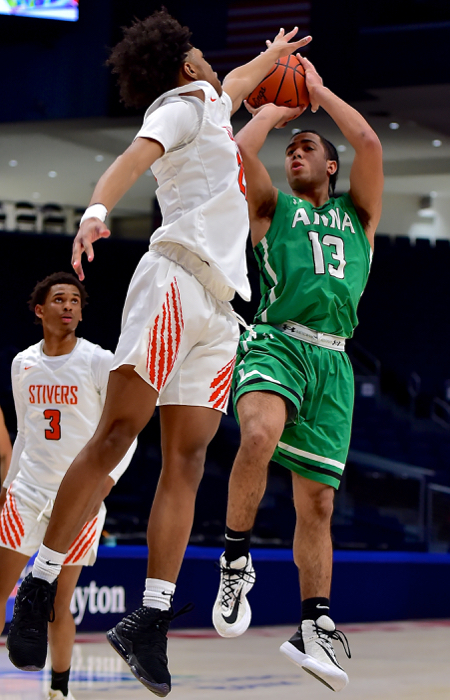 For Stivers, who moves on to play Deer Park in Saturday’s regional final…Ellis had 19, Lattimore had 18, DaJuan Allen had 12, Antonio Aubrey had 8, Doug Spears had 5, an Ivynn Spears had 7.

“I give credit to Stivers,”  added Barhorst, his voice raspy with fatigue and emotion.  “But I give credit to Bart (Bixler), too. He’s been tough all season.  He comes up big against tough teams like tonight, and he gives us a chance.  When other guys are struggling he keeps us in the hunt.  I tip my cap to him because he finished his senior season in style tonight.”

On a night when the news was about the NBA cancelling the remainder of its season, Tom Hanks and his wife catching the corona virus, and the OHSAA and NCAA tournaments being played without fans to watch…it was an unseeming end to the era of seniors Bixler, Huelskamp, Steward, Justin Murray and Isaac Lininger.  It was the age-old virus of sports – someone loses.  And those that were allowed to see it went home not feeling so good.

Did lack of fan support hurt them?  Those forced to stay home would probably tell you…they’re just plain sick about it. 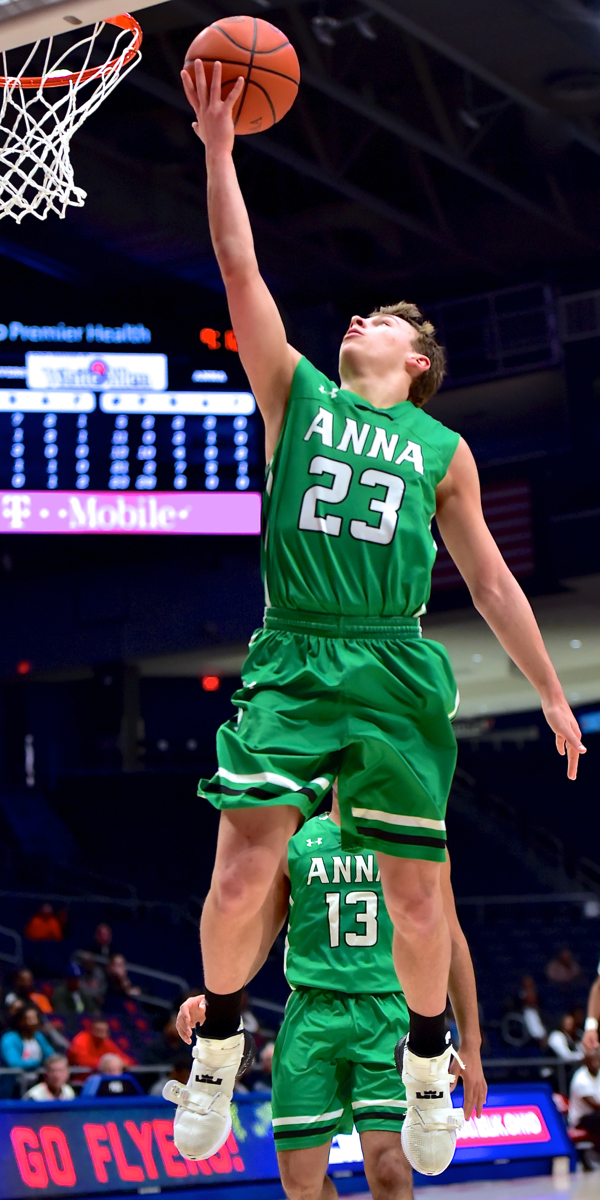