A Year With No Champions, Or Answers…’What Ifs, For Now

With news Thursday that the OHSAA had suspended its girls and boys state tournaments indefinitely, it cast a pall on the conclusion of the winter sports season, and little to offer in consolation.

Columbus, OH – At about 2 pm Thursday afternoon, while sitting on the floor of the empty St. John Arena, OHSAA executive director Jerry Snodgrass looked like a man without weekend plans.  And minutes following the announcement that the 2020 girls and boys state tournaments had been suspended indefinitely, that was exactly the case.

Due to the spreading panic of consequences related to the coronavirus – to the news of other sport entities, the NBA, the NCAA, and soccer events overseas being suspended or cancelled – the Ohio High School Athletic Association followed suit, making its announcement as teams from Division II Dayton Carroll and Beloit West Branch were on the court at St. John Arena going through their pre-game warmup routines.

Teams en route to Columbus to play later in the day were called and notified to turn around and return home until further notice.

“We were almost to Jackson Center, and on our way when we got the call,”  said Minster coach Mike Wiss by phone earlier this afternoon.  “We’re disappointed, but we decided that we’re going to spend the day together.  All that we’ve heard is that the tournament is suspended indefinitely, and that probably means a minimum of two weeks.  But two weeks from now we’ll be playing baseball.  That’s what it amounts to.”

But as Snodgrass sat in the empty courtside bleachers, he had little to offer in terms of answers as to what ‘indefinitely’ means, or what comes next.

“I don’t know anything at this point,”  said Snodgrass, granting Press Pros what amounted to an exclusive update.  “So much depends upon the unknowns.  I mean, we’re prepared to do all we can, but look at what’s transpired in just the past three days – the past three hours.  We tried to lay out every scenario, and I feel good that we did.  I wish we could have notified teams and people four hours earlier, but we couldn’t, given the way this is all going.  We heard that one of the collegiate conference tourneys was underway, and they stopped it at halftime and took them off the court…cancelled it.  That was just today, so that shows how fluid all of this has been. 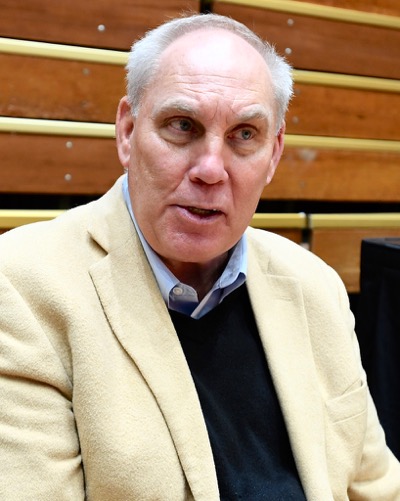 “One certainty about which the CDC, the governor of Ohio, and the Ohio Department of Health has clearly informed us is…this is going to get worse before it gets better.”  – OHSAA’s Jerry Snodgrass

And what does the specific wording of the announcement mean?

“So much of it depends, I guess, on whether our schools are in session,”  admitted Snodgrass.  “And I guess that will be determined by where this outbreak goes.  One certainty about which the CDC, the governor of Ohio, and the Ohio Department of Health has clearly informed us is…this is going to get worse before it gets better.  So given that there’s no immediate end to this, that makes a definitive answer as to the length of suspension impossible.  At this point we just don’t know what we’re going to do.

“Will we have options when we know more?  Yes.  Can we play the games at a later point?  Yes.  But that will depend on some ‘what ifs’  and the availability of facilities.  But we’ve already looked at a lot of those options leading up to today’s decision.  It’s just hard at this point to say which ones we’ll use.  Is cancelling one of those options?  Certainly…it has to be, but we want to do whatever we can to make this opportunity available to the kids.  It’s not definitive as this point, but it is a possibility that we won’t have a state champion, or champions, this year.”

Beyond the fact of disappointment on the part of this and next week’s tournament participants…Thursday’s announcement was a very expensive one, as well.  Much of the OHSAA’s budget is predicated on tournaments and ticket sales – on broadcast fees – and like the issues of ‘if’ and ‘when’ they might eventually play…how does any ‘business’ account for that kind of lost revenue?

“I tell people openly…that we are a business.  We’re a ‘NON-PROFIT’ business, but we are a business.  I think some people believe we operate on tax dollars, but that’s not the case.  In order for us to do this we have to keep our doors open.  We have to have staffing.  Just the dollars that are involved with this tournament, with wrestling, and ice hockey…it’s going to be costly.  I never mention that because it’s not a primary concern when we’re dealing with a health aspect.

“But it’s something we’re going to have to deal with.  No question.  It’s significant…well over a million dollars automatically lost, and that doesn’t include some of the expenses.  So it’s significant, and we’ll deal with it.  But the one thing we’ll focus on is to NOT cut the experiences for which we exist for the sake of kids and our schools.” 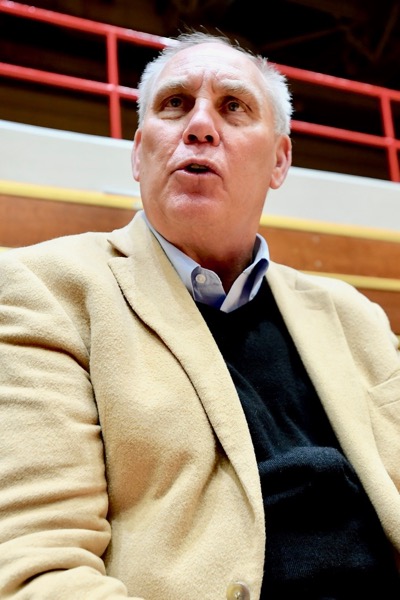 “But the one thing we’ll focus on is to NOT cut the experiences for which we exist for the sake of kids and our schools.”

The news came as a disappointing announcement to athletes and families…looking forward to that ‘experience’ of competing in this weekend’s girls Final Four weekend – of next weekend’s tournament for the boys.   Snodgrass expects to hear some backlash.

“It’s bound to be a residual issue that sits there with some people.  We know that three months from now some are still going to be upset with the OHSAA, but they will forget about the situation that caused this (Covid-19).  What they’ll remember is the decision to suspend the tournament.  So that makes telling our story and doing what we do all the more important.  I know it’s going to be a challenge – the financial challenge, the support challenge – we have so many things we have to face.  But I’m confident that we can.

“There are always people with an axe to grind – that will want to see us fail.  Things like this can be polarizing.  But there’s also a motivation that comes with this that compels you to never let something like this happen again.  It’s the game of life we’re playing and there are people – smart people – who can take on the challenges and make them work.  We have people in this organization that will say, ‘Let’s go’, ‘What can we do to make it work?’  So the challenge becomes an example of how you develop and win, and that’s how I look forward to the days ahead.” 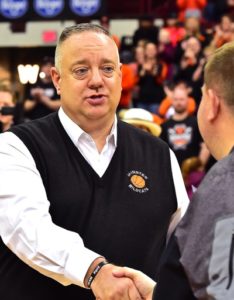 “We were almost to Jackson Center when we got the word to turn around and go home.” – Minster coach Mike Wiss

It could not come at a worse time.  Ohio and the nation needs some good news – a diversion from the gloom of the updated reports that seem to come on the hour.

“That’s true.  It could not have come at a worse time,”  admits Snodgrass.  “But I think the governor realized in our discussion this week the importance of high school sports, what they mean to communities, and what they mean to parents.  He originally said that the games could be played, but no fans.  But he changed his mind and said that parents could come – just parents –  because it’s that important. Governor DeWine was OK with that because he understood the importance of this, and what it means.”

So what now about ‘if’ and ‘when’?  Snodgrass shrugged his shoulders and reiterated his position and the reality of the situation.  As to the possibility of a year without a champion, he concludes. 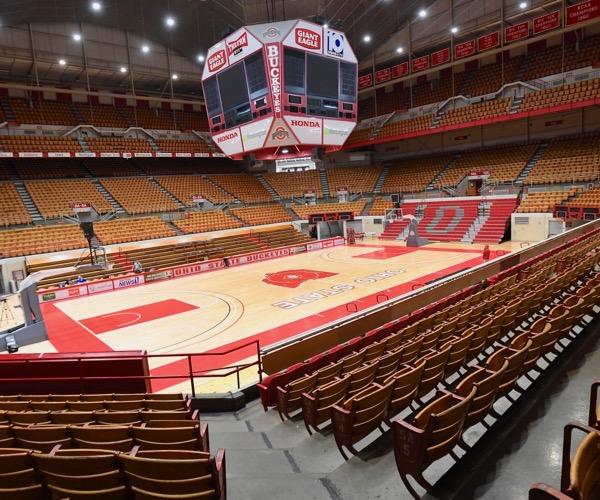 ‘The Spot’ Restaurant, in Sidney, is proud to be the presenting sponsor of the 2020 OHSAA State  Tournaments on staging.pressprosmagazine.com. 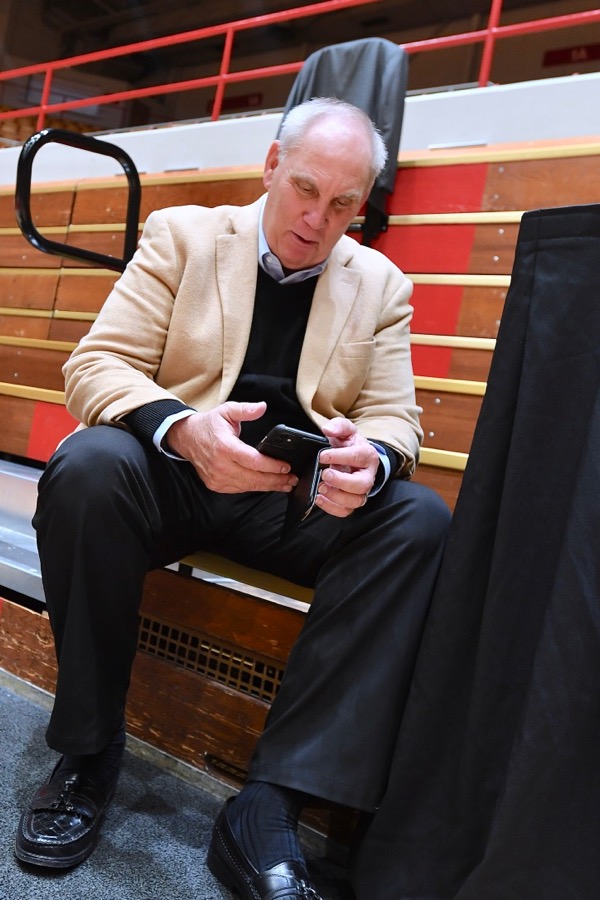 There was no shortage of calls and texts for the OHSAA's Jerry Snodgrass upon Thursday's announcement that the tournaments would be suspended. (Press Pros Feature Photos)