Spartans Manpower, Defense Too Much For Buckeyes

Only seven players saw the court for Ohio State, and deeper, taller and stronger Michigan State took advantage by shutting down Kaleb Wesson and the three-point shot.

Columbus – The sight of Michigan State senior wing Kyle Ahrens blowing a kiss, pounding a left fist to his heart and then getting into push-up form and planting a kiss on the wood at mid-court had to be galling for Ohio State players.

What made it a lot more of a gut-twister was that the Spartans had four more seniors to honor in the final 23.8 seconds Sunday afternoon.

There usually is a foil for coach Tom Izzo and his men at this point of the Big Ten season, and that team was the Buckeyes in front of an emotionally charged crowd at the Breslin Center and a national television audience on CBS.

When the last hugs and handshakes were made, Michigan State wore down Ohio State 80-69 before 14,797.

For the record, Izzo apologized to Chris Holtmann in the handshake line for his players giving the court a big wet smooch.

There certainly was nothing for the Buckeyes (21-10, 11-9) to feel bad about. This was the third straight season the Spartans (22-9, 14-6) got at least a share of the conference regular-season championship and the seventh this century.

Yet junior point guard CJ Walker was hard on himself and the team during post-game interviews.

“You have to make them miss shots and they made some tough shots,’’ he said. “I don’t think we had enough toughness today. They out-rebounded us by a lot. There were a lot of loose balls that they got. They went to the floor first.’’

The building has been a house of horrors for Ohio State. This was the seventh straight loss there. The last victory came in 2005.

But if you live and die with this team, please relax and pop open an adult beverage. Bracket experts are predicting Ohio State could get as high as a No. 5 seed into the NCAA tournament as an at-large team.

The Buckeyes begin the Big Ten tournament Thursday at Bankers Life Field House in Indianapolis against an opponent to be determined.

Yesterday, he was handcuffed to a seven-man rotation, and it really was six considering Justin Ahrens of Versailles played seven minutes.

This game again showed what happens when junior center Kaleb Wesson is clapped down on defensively by Tillman, the probable Big Ten defensive player of the year. He was 1-for-8 shooting and totaled eight points and six rebounds.

Michigan was the lone Big Ten road game in which Wesson played to his ability, and the result was a victory. 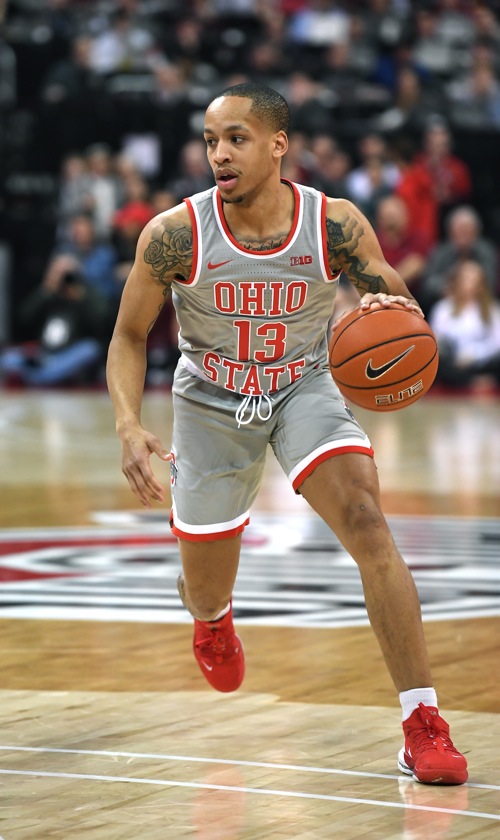 “It’s the post-season and everyone is 0-0,’’ said CJ Walker. “It’s life or death. You never know what can happen. I think we play Thursday and we have to get ready for that.’’

“It was tough to get the ball into the post,’’ sophomore guard Duane Washington said.

With the big man taken out of the offensive mix, the Buckeyes leaned heavily on Washington (16 points) and junior point guard CJ Walker (14).

“They were getting a lot of calls and we were trying as much as we could to control the controlables,’’ he said. “They got a lot of calls in the second half. Those are things we couldn’t control. Definitely, we fought.’’

Ohio State was a dismal 24-for-53 shooting for 31 percent. For the second straight game an opponent ran its players off the three-point line. The result was 5-for-16 shooting behind the arc.

At the other end, there was more precision. The Spartans took down 11 offensive rebounds, had 14 second-chance points and made 11 of 15 lay-up attempts.

How good were they?

The lead was as much as 20 points in the closing minutes, but the edge was a workable 64-56 with 6 minutes, 55 seconds left after a shot in the lane by EJ Liddell.

The beginning of the end came when Tillman had a dunk, Aaron Henry two free throws and Watts a runner in the lane for a 12-point lead with 5:09 remaining.

Holtmann has said at least three times after Young went down that having a short bench wasn’t “sustainable,’’ and this game bore that out.

Walker was asked what Young could do for the team in the conference tournament.

“It would mean a lot,’’ he said. “Everybody knows what he brings to this team offensively and defensively. His effort is contagious.’’

The Buckeyes, he said, are starting all over.

“It’s the post-season and everyone is 0-0,’’ he said. “It’s life or death. You never know what can happen. I think we play Thursday and we have to get ready for that.’’

Despite the loss, Washington knows the team is on the rise in having won nine of its last 12 games. It had won four straight games going in to yesterday’s game.

“We’ve got to keep pushing and keep this momentum going,’’ he said. “I’m really confident in our guys and coaching staff. You’ve got to trust them and what we’re doing.’’