The Shelby County Athletic League cut down two more nets on Friday as Fort Loramie and Jackson Center both captured Division IV district championships. The Redskins pulled away behind its defense while the Tigers, well, they did enough to hold on, too. 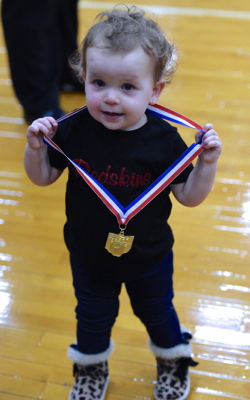 Vandalia, OH – Consider it an unwritten rule when playing high school boys basketball for the Fort Loramie Redskins and the Jackson Center Tigers. You can’t be afraid of heights.

On Friday night, the Redskins and Tigers one again climbed a ladder to cut down the net to celebrate Division IV district championships at Vandalia’s Student Activity Center. Fort Loramie’s man defense did a number on New Miami’s up-tempo offense in a 59-37 victory. Jackson Center followed with a suspenseful, down-to-the wire 33-30 victory that wasn’t complete until Cedarville’s last-gasp three-point attempt from just inside half court sailed wide left of the backboard at the buzzer.

How it played out … well, the only goal during the tournament is to win and advance and the Tigers did exactly that. They’ll work on cleaning up their fourth quarter struggles prior to Tuesday’s D-IV regional semifinal game at the University of Dayton Arena. 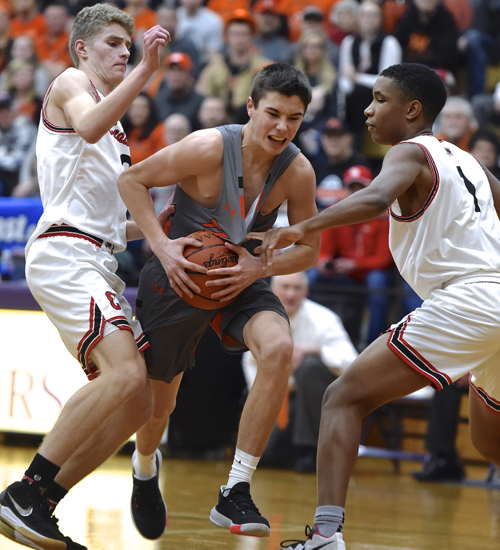 Jackson Center’s Christopher Elchert splits a pair of Cedarville defenders, who did their best to slow him down.

Jackson Center led Cedarville 31-22 entering the fourth quarter. But the Tigers’ largest lead of the game evaporated with the Indians’ 8-0 run, pulling Cedarville within 31-30 with 3:51 to play.

With two minutes left Jackson Center (21-5) worked the clock. The Tigers took it down to 43 seconds when Camdyn Reese scored inside on a pass from Aidan Reichert for the 33-30 lead. It was Reese’s only basket and atoned for a missed layup earlier that, after grabbing an offensive rebound, he sailed high over the rim with a little too much enthusiasm.

“I had to get it in. It wasn’t a decision whether I wanted to or not,” Reese said of what was going through his mind. “ … It’s pretty cool to play with this crowd in the background going wild.”

“He hit a big shot there but we need him to make some of those earlier, too, so maybe we don’t get into a crunch situation,” Elchert said. 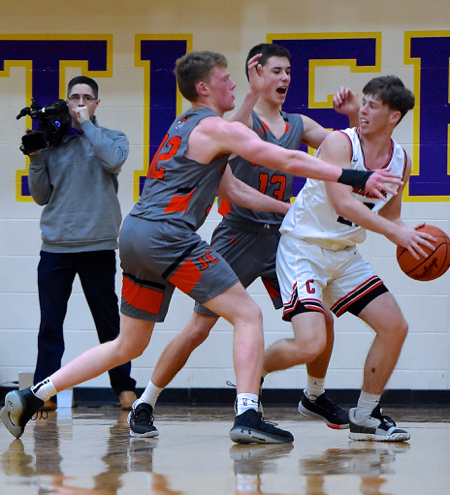 Cedarville (20-6) missed a three-pointer with 22 seconds remaining, then sent Reichert to the free-throw line with 13.2 seconds. Reichert missed the bonus free throw that would have made it a two-possession game.

Finally, with 0.4 seconds left, Cedarville inbounded the ball the final time from half court. Colby Cross’s catch-and-fire attempt had no chance. It was one of his few misses after finishing with 17 points, including all eight of his team’s points in the fourth.

“It definitely would have been easier to win if we hit our free throws,” said Reichert, who matched Cross with a game-high 17 points. “We pulled it out.”

Jackson Center finished 3-of-10 from the free-throw line, including a 1-for-7 effort in the second half.

“It feels like the Jackson Center Tigers always make them exciting,” Elchert said. “We came right out (in the fourth quarter) and had defensive breakdowns. Those defensive breakdowns led us to going stagnant offensively, too. That became a problem. Luckily we had enough defensive stops in us to hang on.”

And in March that’s all that matters.

Christopher Elchert added six points and Garrett Prenger five. Garrett Heitkamp, who scored two points, held Cross to his 17.2 points per game average. Elchert shadowed Cedarville’s Trent Koning most of the game and helped limit him to seven points, nine below his average.

The winners return 7 p.m. Friday for the regional championship.

Fort Loramie slowed the pace against a New Miami team that averaged 69 points during the regular season. New Miami, making its second straight district final appearance, pulled to 25-20 on Deanza Duncan’s three-pointer. Loramie responded with a 20-8 run the rest of the third quarter.

It started with a Caeleb Meyer three-pointer on a third-chance opportunity, was followed by Nate Meyers’ basket and foul and continued by Damon Mescher’s basket and three-pointer midway through the quarter. Loramie beat New Miami’s full-court press consistently, including scores by Nick Brandewie and a couple more by Caeleb Meyer. 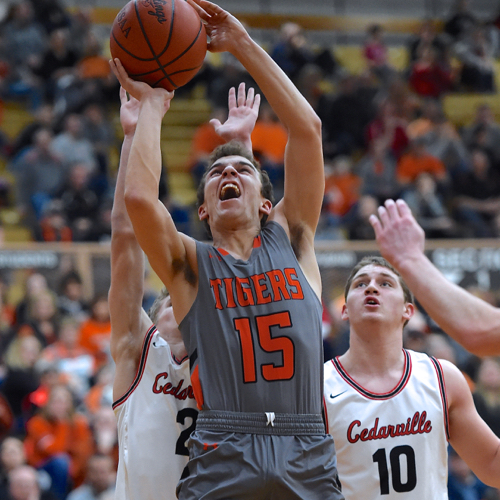 Garrett Heitkamp made his mark on Jackson Center’s district championship with his defense.

Fort Loramie’s quarter, though, was summed up by Devin Ratermann’s basket to cap the quarter. Ratermann missed a floater down the lane with a couple seconds left. Instead of letting the clock run out, he kept the rebound alive on a tip, pulled it down and laid in a shot to just beat the buzzer. The Redskins led 45-28.

New Miami never scored more than four field goals in any one quarter. In the first half, nine of their 17 points came on free throws.

“We didn’t work much offense much at all this week,” Caeleb Meyer said. “We worked a lot on box out drills against our scout team and they really pushed us hard.

“We wanted to get back (on defense), get a hand up and use our length to our advantage. If they hit a couple in front of us just live with it.” 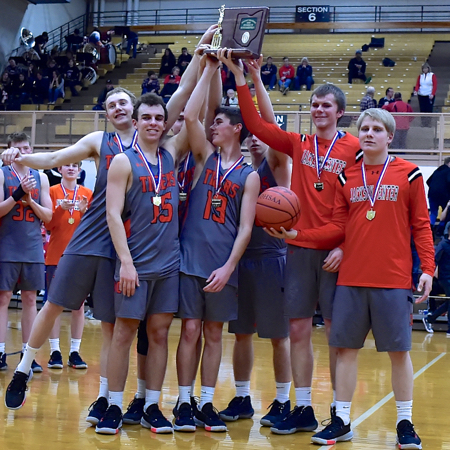 And New Miami died by it, despite what one fan shouted early in the game. The Vikings were having success driving inside and getting fouls – they finished 14-of-21 from the free-throw line – prompting a Vikings’ fan to shout “They can’t play defense!” to encourage more of the same.

But instead New Miami started launching from the outside. A team averaging 24 field goals per game finished with 11 against Loramie.

“(Fort Loramie’s) well-schooled,” New Miami coach Jared Lee said, launching into a scouting report on the Redskins’ defense. “They’re never out of position. They’re very physical. There’s no free cuts to the basket. They really extend out on your shooters when they need to. They pack the lane. You just don’t get an easy look. This game is an awful lot about how many open baskets you get. They got more open looks than we did tonight and they didn’t miss them.”

“They brought the fight. They brought the energy, the intensity,” Fort Loramie coach Corey Britton said of his Redskins. “When you get ahead in tournament games it makes life a little easier.”

Unofficially, Fort Loramie outrebounded New Miami 31-10. The Vikings, who average 32 rebounds per game, were held to four offensive rebounds. The lack of second-chance points – as well as the Vikings’ settling for deep three-pointers that were off target – contributed to a season low in points. The previous low was 44 in a win against Cincinnati Seven Hills.

“We couldn’t get a rebound,” Lee said. “You give any team three and four shots on one possession and they’re going to be a pretty good shooting team. They took advantage of it.

“They didn’t let us make a run. Every time we got a bucket they got one or two themselves. Any time we made a mistake defensively they crushed us on it. Hat’s off. That’s an incredibly well-coached team.” 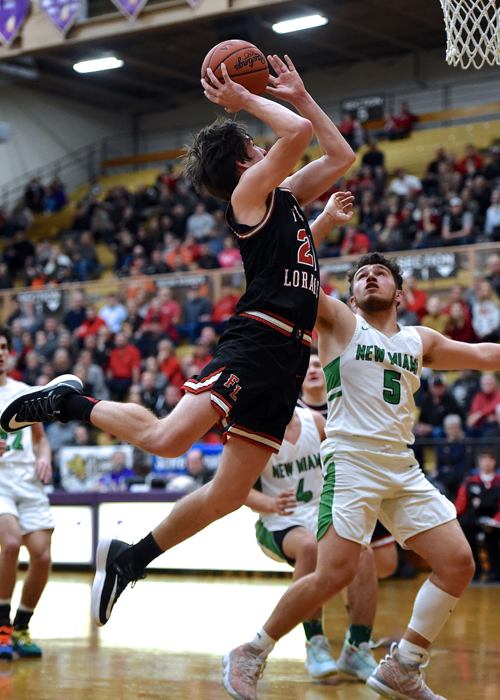 “It feels amazing. People doubted us this year,” Caeleb Meyer said. “They didn’t think we’d make it this far. We proved them wrong.”

They certainly made believers of New Miami. The Vikings’ trio of Duncan (22 points per game), Jordan Robinette (15.5 ppg) and Trey Robinette (13.5 ppg) combined to average 51 of the Vikings’ 69 points during the regular season. They managed to score 29 against the Redskins. Duncan led the way with 12, J. Robinette had 13 and T. Robinette four. All three juniors have surpassed 1,000 career points.

“I’m just so proud of our kids. They’ve come together through the course of the year,” Britton said. “They’ve listened. They’ve done everything we’ve asked them to do. I’m just so happy for them that they get to reap the benefits of another district championship.

“It speaks volumes to the types of kids we have. They’re gritty, they’re tough. They’ll run through a brick wall for each other. I can’t speak enough about our kids. I love them to death. I don’t know if I express that enough to them. Our kids are awesome. … When you have kids like that anything is possible.” 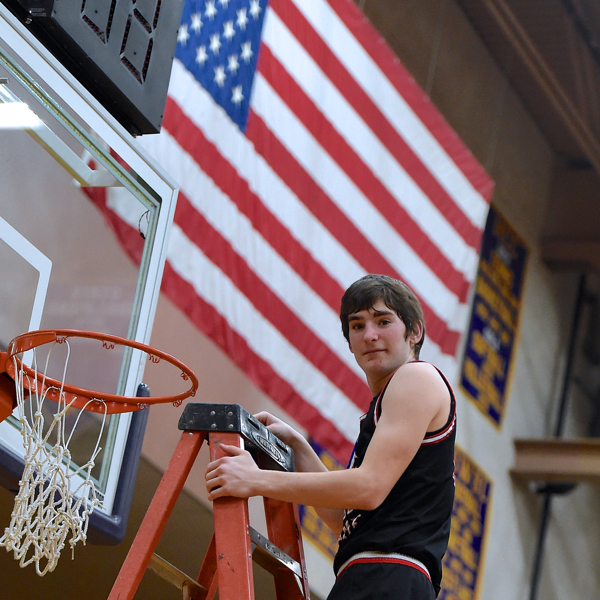 “It feels amazing. People doubted us this year. They didn’t think we’d make it this far. We proved them wrong.” – Caelab Meyer 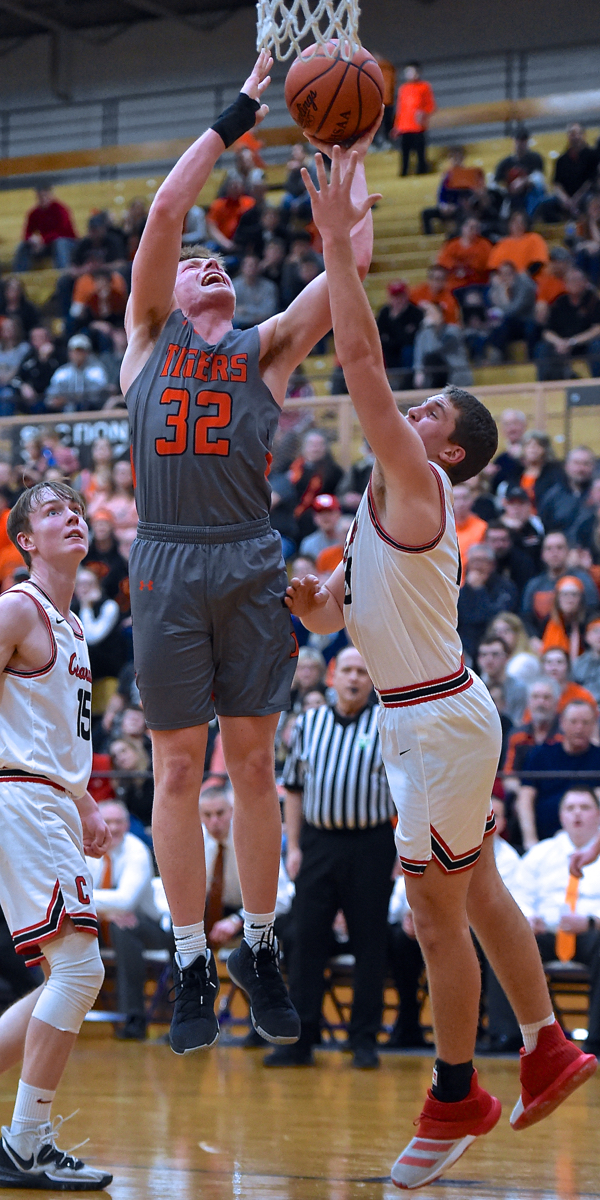 Aidan Reichert was unstoppable in the third quarter with eight of the Tigers' nine points. (Press Pros Feature Photos By Julie McMaken Wright)