Fort Loramie’s defense led the way to instant offense in a 60-point victory, while Tri-Village struggled in the second half to fall in the Division IV regional semifinals for the fourth straight season.

Vandalia, OH – Carla Siegel describes her Fort Loramie girls basketball team as having a sixth sense, especially on defense. The Redskins simply know where to find each other on the court.

That sixth sense was tingling again at Vandalia Butler’s Student Activity Center on Thursday. There was no Bruce Willis in this version. But for the Danville Blue Devils it still made the hair on the back of their collective necks stand on end. And, just like the movie, the Devils didn’t see this ending coming.

Fort Loramie defenders forced an unofficial (but probably not too far off) 48 turnovers against Danville in the Division IV regional semifinals. It resulted in an 84-24 victory. Those lopsided scores are supposed to happen in first-round sectional games, like Loramie’s 90-12 blitzing of Ansonia. But in a regional semifinal?

“I told the girls on Monday the games of 20 or 30-point blowouts are over because you’re in regionals,” Siegel said.  “Their intensity was so good and their focus was so good.”

And their record is so, so good. Fort Loramie, the No.-1 ranked team in the Associated Press D-IV poll, improved to 25-0. Fort Loramie plays Cincinnati Country Day (26-2) for the Southwest District regional championship 7:30 p.m. at Butler’s Activity Center. 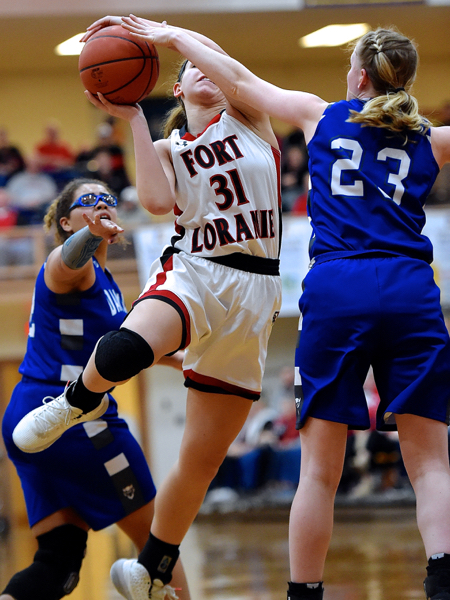 Country Day’s second-half surge pushed them past Tri-Village 64-55 in the second semifinal. The Patriots (25-2) saw a nine-point halftime lead evaporate after the Indians outscored them 20-7 in the third quarter. The regional appearance was Tri-Village’s fourth straight, with all four coming to an end in the regional semis.

“I feel like we do things the right way. I can’t imagine anyone puts in more time and effort than our kids do,” Tri-Village coach Brad Gray said. “We run into good basketball teams. We told our kids last night we’re not going to want it more than the teams we’re playing. Everybody wants it really bad at this point. The key to getting over the hump is we have to play really good in these moments. We have to find a way to get over that hump.”

The reward for CCD is trying to figure out how to beat that Loramie defense with less than two days of preparation. If Danville thought they had it figured out after matching baskets with Fort Loramie in the opening minutes, well, here came a plot twist.

Kenzie Hoelscher scored off a turnover with 5:56 left in the first quarter for an 8-4 Loramie lead. It was the start of 20 consecutive points for Loramie that ended with Caitlyn Gasson’s three-pointer with 2:12 remaining.

During one stretch Hoelscher scored four straight baskets, three off turnovers. At one point a pair of Redskins successfully trapped Danville’s ball handler n the corner near half court. Hoelscher ran up, grabbed the ball from the Blue Devil and sprinted for the uncontested layup. At times it was that decisive.

“I couldn’t imagine playing against our defense,” said Gasson, a whirlwind of up-tempo energy herself. “We are known for our defense around the state. We just try to stick to our game plan and not come out complacent.” 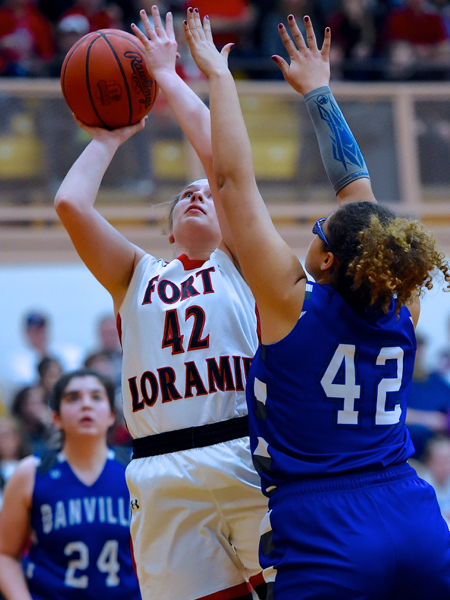 Marissa Meiring scores inside in the Redskins regional semi-final win.

In addition to her teammates, Hoelscher credits the Shell Drill that Siegel runs in practice for their dogged defense. The four-on-four drill goes until the defense gets a deflection or turnover, then players rotate.

“It really helps because our practice team is just as good as our first team,” Hoelscher said. “They challenge us every single day in practice. Any team that throws that kind of defense at us I think we’ll be ready for it.”

Danville wasn’t. The team that finished third in the Knox Morrow Athletic Conference (behind Cardington and Mount Gilead) had about 2 hours and 30 minutes to figure out what went wrong as they traveled up I-70 and State Route 62 to Danville, located in northeast Ohio between Columbus and Akron.

The Blue Devils played hard until the end. But the Redskins – winners of the Shelby County Athletic Conference – were simply faster, taller, stronger, more athletic and more fundamental. Danville had no answer for Hoelscher inside and her game-high 23 points. Marissa Meiring added 14 points on drives to the basket as 13 different Redskins scored.

“That’s why they’re the best team in the state,” Danville coach Matt Proper said. “Defense creates offense and that’s usually what you run into this deep into the tournament.  Just a good team. A lot of times with small-school basketball you see a good player or two, but that’s a good team. That’s why they’re No. 1.

“You get that kind of pressure, especially on a big stage, the girls panic a little bit and the game gets out of control real quick. It happens sometimes. But I’m proud of the kids and what they’ve done this year.”

Fort Loramie’s defense averages 22 turnovers per game. Offensively, eight players average between 11.0 and 3.9 points per game. It’s that team-first mindset that drives the Redskins’ success that includes regional appearances 12 of the past 13 seasons. 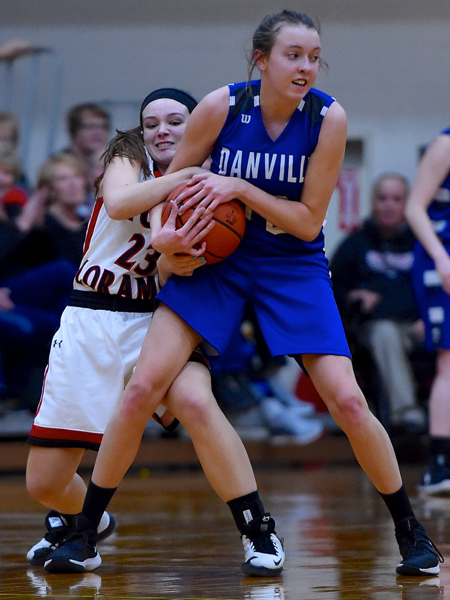 Taylor Ratermann doing what Loramie does best…pressure the basketball.

“My unit – when I talk about my unit I’m talking about my top 10-11 players – they were on it today. They were feeding off each other,” Siegel said. “When one person got a steal that jacked everyone else up and they wanted to get a steal or a deflection. I can’t say enough about the girls and how hard they played.”

Fort Loramie led 31-10 at the end of the first quarter and 58-15 at the half. The second half was played with a running clock. Loramie’s lead reached a game-high 60 points with the final score, a Riley Heitkamp layup off (what else?) a steal by Macy Imwalle. Fort Loramie’s starters stood and cheered deep into the fourth quarter when the players off the bench scored or made a worthy play.

“We’re really good friends, not only on the basketball court but we hang out on the weekends,” Hoelscher said. “We really do love each other. I think the best part is everyone wants everyone to succeed. It doesn’t matter who scores. We’re all rooting for each other.”

Fort Loramie has won 21 games by 60 points or more this season. They’re outscoring teams 72-21 overall, including a huge 19-5 advantage in the first quarter.

Still, the Redskins heard all week about their lack of offense in a 40-26 district final victory over Franklin-Monroe last Saturday. That motivated the Redskins to show they could score, score and score again.

“We played Franklin-Monroe and we only won by 14, right?” Siegel said of the whispers from the basketball critics. “That’s what I hear from everybody. I told the girls you just played a district final, there are only 32 great teams in the state of Ohio playing right now and you beat a team by 14. I told them I would take that any day of the week.” 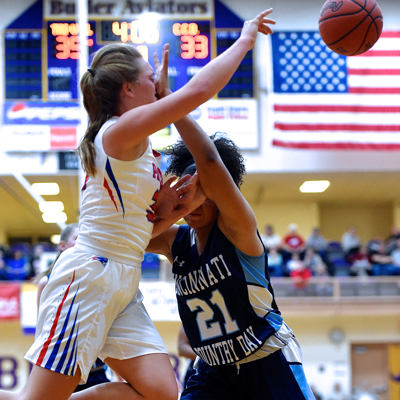 Added Hoelscher: “We’re getting to the best of the best. We’re playing really good teams. You’re not going to get those 50, 60-point wins easily. I know we didn’t play our best (against Franklin-Monroe) so we really buckled down in practice this week to pick it up today.”

Tri-Village tried to pick up its game in the second half. Country Day tied the game 35-35 midway through the third quarter and took a 45-38 lead into the fourth. Rylee Sagester and Lissa Siler each had three-pointers in the fourth quarter and Morgan Hunt added a pair of baskets. But CCD’s Sabrina DelBello knocked down all five of her three-pointers in the second half, including three in the fourth quarter.

The Patriots pulled within 50-45 midway through the quarter, but no closer.

“We just had a really bad second half. We didn’t rebound the ball well all night,” Gray said. “We were able to overcome it a little in the first half. In the third quarter we didn’t overcome it. … That’s the game. We shore up those rebounds instead of giving them two or three shots every time down, it’s probably a different outcome. Our kids played really hard. I can’t fault their effort. Unfortunately the performance wasn’t as good as we’re capable of and that’s what hurts.”

“We knew coming into tournament we had a target on our backs,” Gasson said. “We just have to play our game. This is a lot of fun but we’re not done yet.” 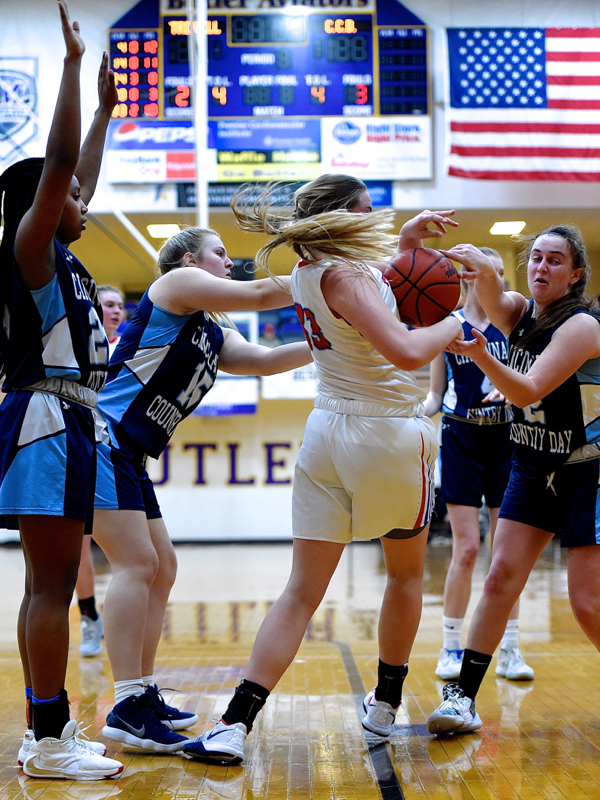 Tri-Village put up a fight until the end.  “We have to find a way to get over the [regional] hump.”  said coach Brad Gray. 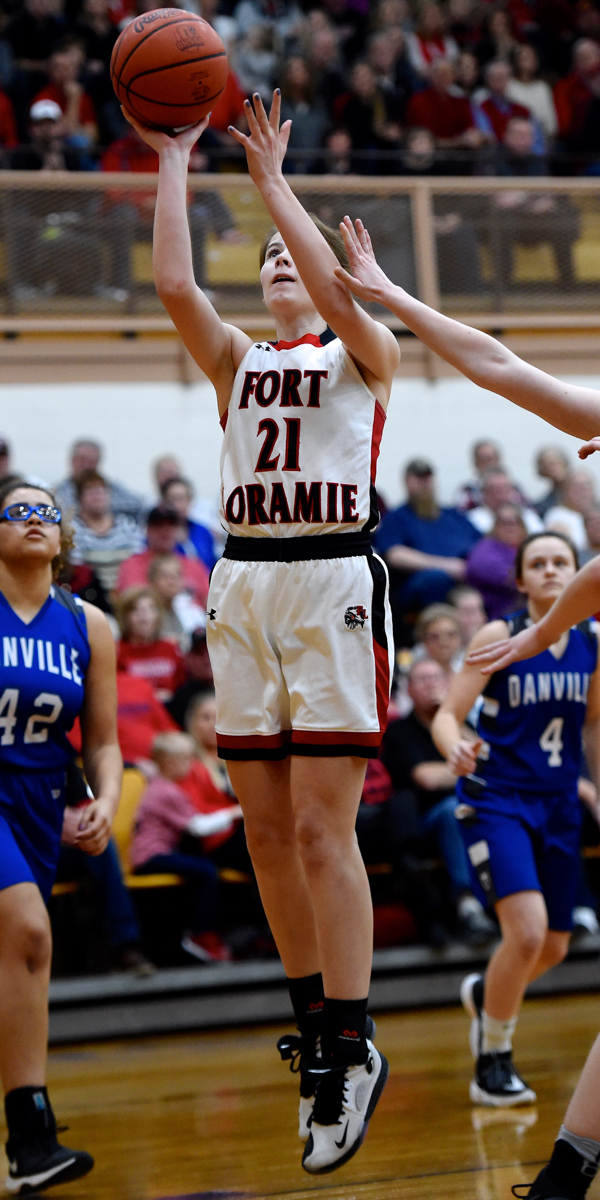 Ava Sholtis drives to the rim for a two of Fort Loramie's 84 points in their wide-open win over Danville. (Press Pros Feature Photos By Julie McMaken Wright)