For 16 minutes, it looked as though the Franklin Monroe Jets might derail the state’s number one team. Unfortunately for the Jets, they could not duplicate their first half performance and became Fort Loramie’s 24th consecutive victim.

Troy – One might think it would become old hat. Routine. Matter of fact.

Be assured the Fort Loramie Redskins never take it for granted.

“It” is the Division Four District title, which, going into Saturday, the Redskins had won 9 times in the last 10 years.

This year, a district championship trophy was almost a foregone conclusion for the ‘Skins, who have dominated their first 24 opponents like few teams have in recent memory. Aside of a 17 point win over Anna (which claimed its own district title Saturday) on February 3rd, Loramie’s closest verdict of the season was a 28 point trampling of 2-time defending state champion Minster in the season opener. 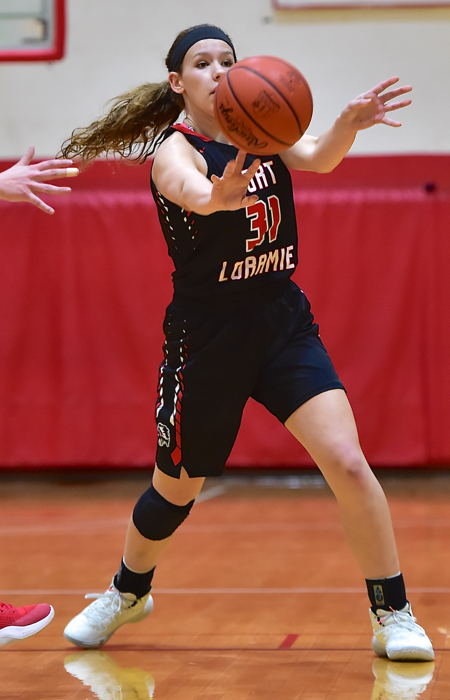 “I though we were a little tight there in the first half,”  said Carla Siegel.  “Our intensity was good, we were talking, but I was really disappointed with our offensive flow today.”

Franklin Monroe stood in the way of this year’s trophy, and the 23-2 Jets had every intention of making the Skins work for that title, if not claim it for their own.

For a little more than a half, it was anybody’s game.

Then the Loramie pressure took over, open shots that fell for the Jets in the first half missed in the second, and the state’s #1 team used it’s depth and quickness to pull away in the games final ten minutes.

When the final horn sounded at the Trojan Activity Center, Loramie had a 40-26 win, their 24th straight without a loss, and that 10th District title in 11 years.

Franklin Monroe had a lot of tired, disappointed players, and a very proud coach.

“I’m really proud of our kids,” said the Jets fifth year coach Abbey Moore. “We came out in the first half and played great defense, which we felt was a key for us. Unfortunately, we got a little overwhelmed in the second half, and just couldn’t handle the ball.”

“I thought we were a little tight there in the first half,” said veteran Loramie coach Carla Siegel. “That wasn’t really my team there in the first half. Defensively, I was very pleased with the way we played. Our intensity was good, we were talking,  but I was really disappointed with our offensive flow today.

“Give Franklin Monroe some credit for that. They had a good game plan and did a good job of matching our intensity.”

The first half was a back and forth affair that saw 7 lead changes. The Redskins lead 9-7 after one, but trailed 16-12 midway thru quarter number two. The Jets went five for five behind the three point line, but a Taylor Raterman three from the top of the circle gave the Redskins a 20-19 halftime lead.

After that, the lid went on the basket for the Jets. Monroe went more than 6 minutes without a point in the third quarter as Loramie built the lead to ten points, finally settling for a 31-23 lead after three. 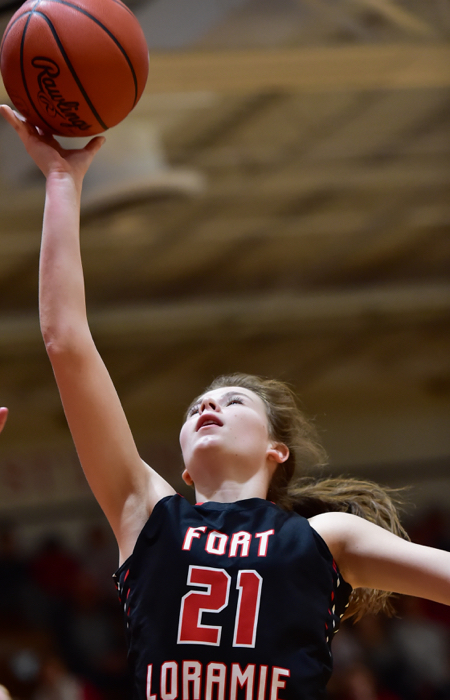 “Our expectations are high,”  says Carla Siegel.  “I think for the most part our girls have handled it well.”

“Their trap really hurt us in the second half,” Moore explained. “We had a hard time getting the ball out of the trap. If we had been able to do that a couple of times, maybe we could have taken them out of that trap, but we turned the ball over instead of finding the open man. That was pretty much the story of the second half.”

The Jets continued to struggle offensively in the fourth quarter, and the Redskins put the game away at the foul line. Senior Marissa Meiring, who scored a game high 16 points, made 8 of nine from the line in the final 8 minutes to keep the Jets from making any kind of a comeback.

“We are all very excited about the opportunity,” Meiring said about advancing to the regional tournament. “We know we have potential, but we have to keep working hard every day to reach our goals.”

Along with Meiring, Ava Sholtis added 13 points. The sophomore, who doesn’t start but plays major minutes, was all over the court at both ends of the floor, rebounding, blocking shots and playing a solid all around game. 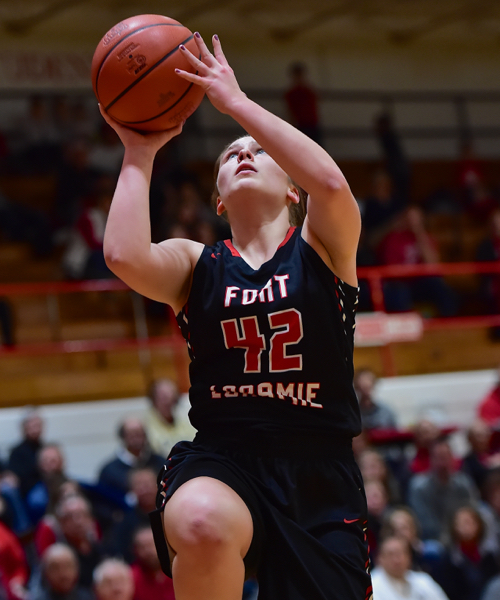 Marissa Meiring and the Redskins’ depth helped wear Franklin-Monroe down in the secon half.

The Redskins dominated two key stats, out-rebounding Franklin Monroe 22-10, including 10-2 on the offensive glass, and forced 19 Jets turnovers compared to 10 of their own. When the Redskins took over in the second half, they had just one turnover while forcing 8,

While the Jets were drilling those 6 three pointers, they couldn’t buy a basket around the rim, going 0-7 in the first half and 1-13 on the game in two point range.

“We wanted to take away the middle, because Corina Conley is such a fantastic player,” Siegel explained.”We gave up those back to back threes to her in the second quarter so we talked about staying a little closer to her. I think the girls did the best they could today. Win and advance, that’s what we did today.”

Meiring and leading scorer Dana Rose both picked up their third fouls within minutes of each other in the third quarter. Marissa said here was no panic on the Loramie bench.

“Just keep playing with no drop off at all,” said the senior. “We have a lot of faith in each other. We have 15 players who are perfectly capable of playing each others spots.”

“I wasn’t happy with the fouls, but they didn’t concern me because of the depth we have,” Siegel concurred. “That depth has helped us all year, and I think wore them down a bit late in the third and early in the fourth quarter.  I thought Marrisa had a stellar game, and Ava Sholtis had a phenomenal game as well.”

“I am just extremely proud of them. They have paved the way. I told them in the locker room to look at their jerseys. That there are little kids now that want to grow up and wear that number. They have done everything I asked them to do the last four years. We hate to see them go, but they will be successful in whatever they go on to do with their lives.”

Siegel addressed the expectations for this team.

“They are high,” she acknowledged. “I think the girls are ready for that. But we have to stay focused on one game at a time. Today, I don’t know if we were too focused, or not focused enough. We will sit down and talk about it Monday. It was a big game, the gym was packed, and it’s good to just get through it.  The expectations are there, they have been all season. I think for the most part the girls have handled it well.”

In the game prior to Loramie-Franklin Monroe, state ranked Tri-Village  nearly had it’s post-season life snuffed out by Legacy Christian. The Knights held the Patriots scoreless for nearly 6 minutes of the fourth quarter while building a 35-30 lead, but could not close the deal. Legacy missed four straight free throws, including the front ends of three one and ones, and allowed the Patriots three straight offensive rebounds before Maddie Downing scored with 27 seconds left. Downing completed a three point play from the line to tie the score and force overtime, then hit a jumper from the lane to give the Pats the lead for good in overtime. The final was 43-36 as Tri-Village improved to 24-1 and out scored the Knights 13-1 in the final 6 and half minutes of regulation and overtime.

The Division Four regional semifinals are Thursday night at Vandalia Butler. Loramie will face the winner of Danville and Fairfield Christian Academy at 6:15, while Tri-Village meets Cincinnati Country Day, a 56-46 winner over Mechanicsburg in the first game at Troy, at 8pm. 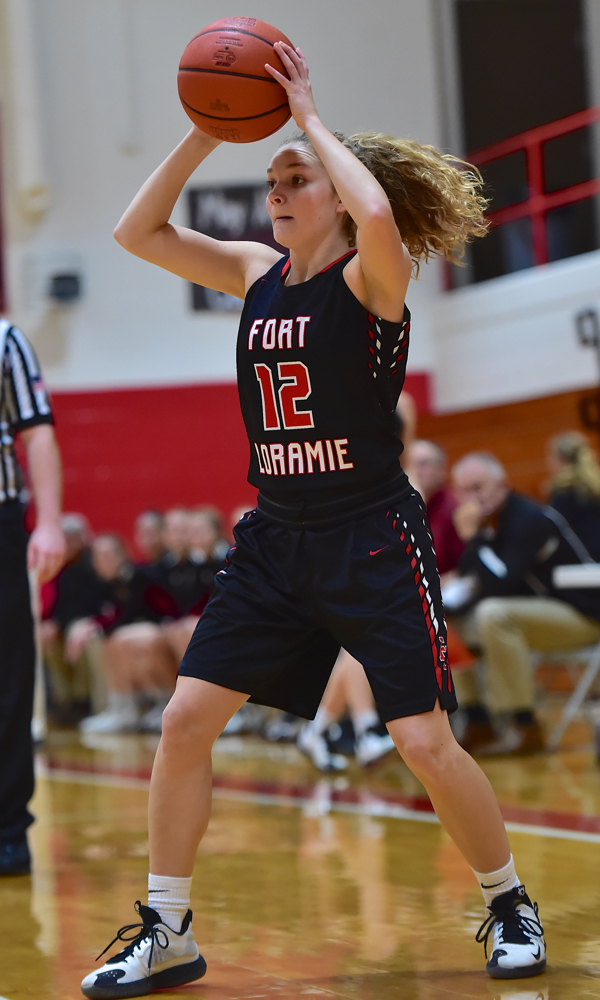