Georgia Tech came out like a swarm of bees against the Buckeyes and starter Garrett Burhenn in Friday’s series opener. The takeaway?  Put it behind, learn from it, and come back and play again tomorrow.

Atlanta, GA  – Chalk it up as a bad day, one to file away and hope that’s all there is to it—nothing more.

Ohio State played Georgia Tech here Friday and got their britches tanned. The Yellow Jackets, ranked as high as 19th in some quarters, beat Ohio State, 12-4.

The damage was quick and early and at the expense of starter Garrett Burhenn (0-2).

Tech was up 3-0 after one inning, 8-1 after three, and 12-1 after four innings. Through the first four innings the Yellow Jackets had 17 hits.

By the time it was through, seven of Tech’s nine position players had two hits or more.

Burhenn didn’t get out of the fourth. Tech opened the inning with a single and then came back-to-back home runs: a two run shot to right by Baron Radcliff, then a solo shot to left by Drew Compton. At that point, Ohio State coach Greg Beals went to his bullpen, a move that thankfully cooled Tech’s fires.

Will Pfennig worked two innings, allowing one run on three hits. He struck out five and didn’t walk a batter.

“We won the back half of the game,” Beals said. “But by that time the horse was out of the barn, as someone once said. They got on us early. Got the momentum and we helped them with a couple of plays.”

For their part, Pfennig and Vance, who both figure to play a role in shaping this year’s bullpen, dismissed the loss as a proverbial bump in the road.

“After a game like this you just have to put it away,” Pfennig said. “Obviously, you are disappointed. But we have to realize it was just one game. We know that we are just as good as they are and we’re excited to come out and play another game tomorrow.” 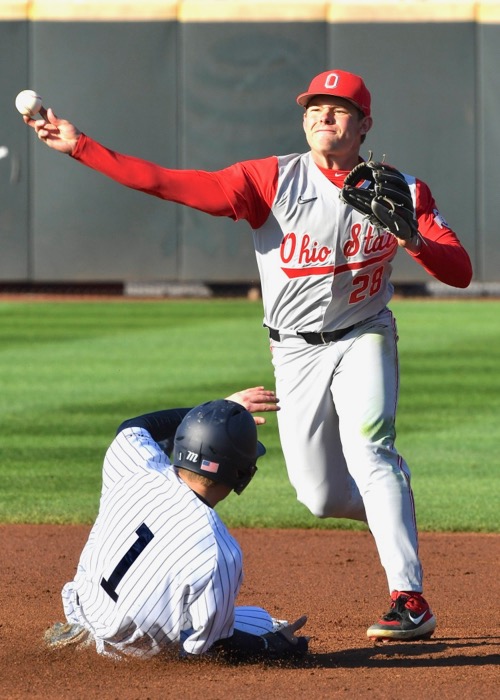 Marcus Ernst got the start at second base and turned this double play to stop the bleeding Tech’s three-run first.

“It’s is just one game,” Vance said, “but we have to learn from a (loss) like that. They got on us early (with the bats) but we didn’t help ourselves in the field, either.”

Sitting at 2-2 after the loss, Ohio State gets another crack at Georgia Teach Saturday afternoon at two o’clock. Lefty Seth Lonsway will go against a lineup that is loaded with left-handed hitters. Tech will counter with right-hander Cort Roedig, who sports a 9.82 ERA. This would appear to be advantage OSU, but Beals will be looking for a tighter, cleaner performance from his Buckeyes.

Leaving Florida last weekend after a pair of wins against one loss in the Snowbird Classic, Beals said: “We have some things to think about…We have some work to do.”

They still do. The Bucks defense is not tight just yet. Georgia Tech’s three-run first was helped by two Ohio State errors. The inning could have worsened had it not been for an inning-ending 6-4-3 double play that came with three runs in and the bases loaded. In four games, the Bucks have committed 10 errors.

“We don’t make a play on a ball in the outfield and then we miss another one in the infield and, there ya go,” Beals said. “We can’t let things like that happen.”

The Bucks didn’t look too good at the plate either. Senior starter Jonathan Hughes gave the Yellow Jackets five solid innings before running into trouble in the Buckeyes’ three-run sixth. 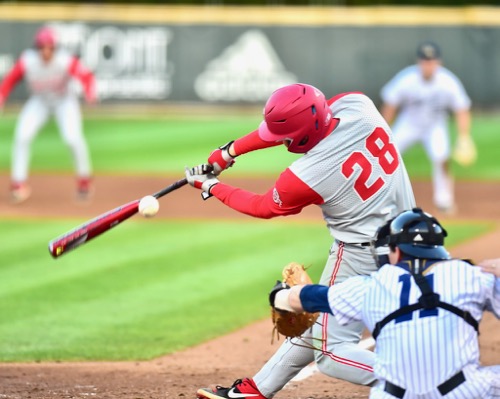 Too much of this…the Buckeyes struck out 11 times in Friday’s loss, and now have 47 strikeouts in 37 innings of play.

Through five he allowed one run—Noah West’s home run in the third—one three hits. In that span, he had five strikeouts.

The Bucks got to him in the sixth. Dillon Dingler started the inning with a single to left and took second when Brent Todys drew a walk, just the second allowed by Hughes. Conner Pohl reached on a fielder’s choice. The Bucks eventually benefited from a sac fly, a wild pitch and an error by shortstop Luke Waddell and a couple of walks.

But from that point on the Georgia Tech pen cruised on home. Ohio State did not have a hit the final three innings. Two men reached base, both on walks and six Bucks struck out—that’s 11 for the game.

And there’s another concern for Beals. He wants this to be a contact-hitting team. Too many times—thus far, and we are just four games into the season—hitters are not putting the ball in play. Ohio State now has 47 strikeouts in 37 innings.

For comparison’s sake, Georgia Tech has 40 strikeouts in 45 innings.

“We need to get better. We have to work on some things,” Beals said.

As is often the case with Beals, his eyes and tone say as much or more than his words. In these earliest days of the season, the Buckeyes will work and they will work hard, and while they will learn from a thumping’s like they took here Friday afternoon at Russ Chandler Stadium, they will not let it dominate their thoughts or be defeated by a single loss.

“We have to understand it,” Beals said. “We have to learn from it—grow, improve.”

He has said it before. He will say it again. 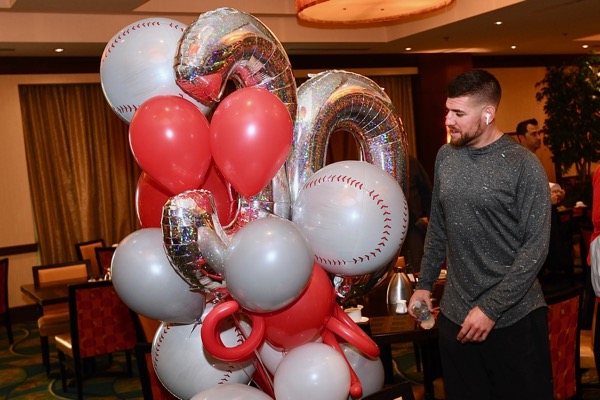 On a brighter note…assistant coach Brad Goldberg was surprised by balloons sent to the team hotel…to celebrate his 30th birthday. 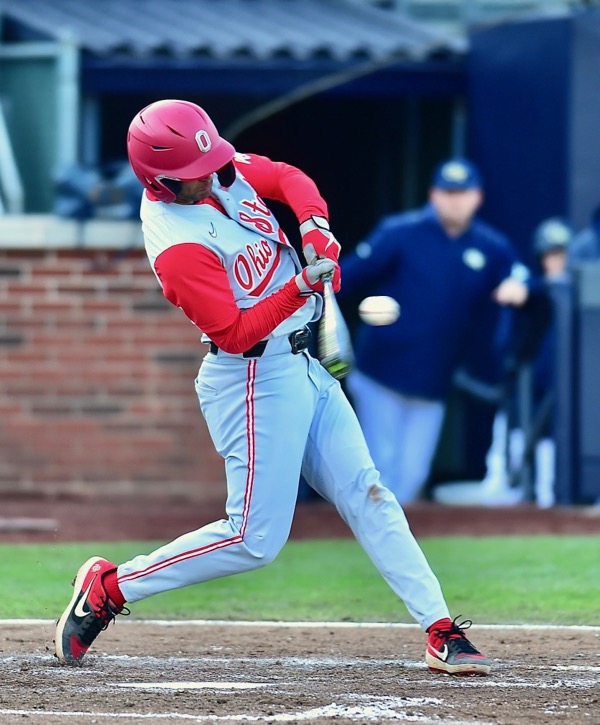