Sixth-ranked UD got off to a blistering 17-0 start, shot 50% for the game, played stifling defense, and cruised to an eventual 81-67 Tuesday win over Rhode Island at the Arena.

What does Las Vegas know?

Didn’t Rhode Island have the league’s leading scorer in Fatts Russell (who isn’t fat) and leading rebounder in Cyril Langervine?

Not only did the Flyers win, they destroyed the Rams. They led by as many as 25 before coasting to the end for an 81-67 victory.

Turned out, it was because the Flyers were on a mission on this night and it was all business.

Incredibly, the Flyers started the game with a 17-0 lead in less than five minutes. The Flyers couldn’t miss. They were 7 for 7 from the field and 3-for-3 from the three-point line.

Meanwhile, the Rams shot the basketball like woodchucks chucking wood. They were 0 for 8, 0 for 2 from the foul line and committed two turnovers. 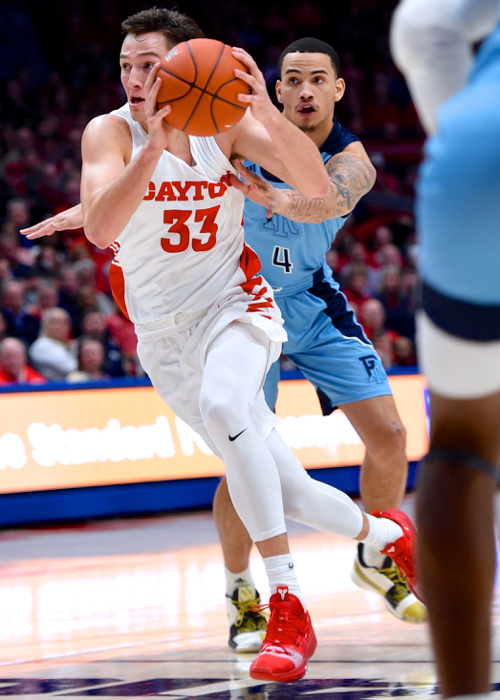 Ryan Mikesell breaks for the rim in UD’s win Tuesday over Rhode Island.

They could have stopped the game right then and saved the three officials a lot of used up breath. The game was physical and hard-fought and players on both sides were mouthy.

So the officials blew and blew and blew until they were blue — a season-high for a Dayton game, 52 personal fouls. There were 29 called on Ud and 23 on Rhode Island.

In addition, they called eight technical fouls, five on Rhode Island and three on Dayton against the bench, Rodney Chatman and Trey Landers,

“There was a lot at stake,” said UD coach Anthony Grant. “We were playing for first place and the game was very physical and a lot of things were being said on the court. The officials were just trying to keep things from getting out of hand.”

As per usual, the Flyers were led by the Rousing Roommates — Obi Toppin and Jalen Crutcher.

Toppin led the Flyers with 22 points (7 for 9 from the floor) and snagged 10 rebounds for a double-double. Crutcher flipped in 21 on 5-of-seven shooting and was 9-for-9 at the foul line.

And there was a second Flyer with a double-double. The ever-steady, ever-ready Trey Landers had 10 points and 14 rebounds.

Rhode Island, a poor free throw shooting team, was at the line 38 times and made 26. UD shot 26 freebies and made 22.

And the Flyers lived up to their No. 1 ranking in the country when it comes to shooting the basketball. They hit 50 per cent (27 for 54) and hit 5 for 19 from three.

Rhode Island was three steps below awful when aiming at the basketball. The Rams were the Hoop Gang That Couldn’t Shoot Straight — 19-for-66 (29 per cent) and made only 3 of 15 from three. 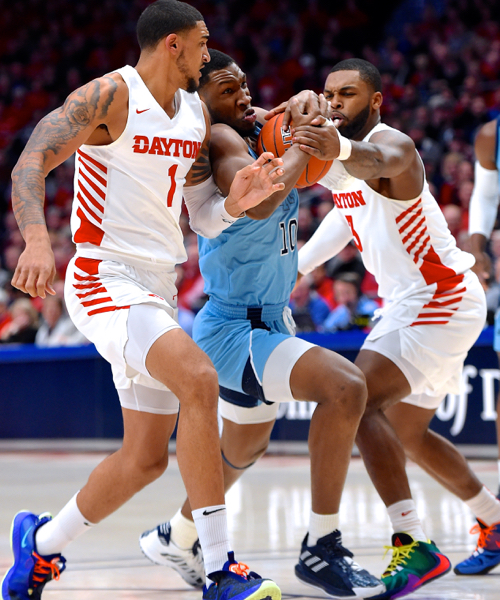 Fatts Russell lead the A-10 with a 20.3 average, but had only two at the half. But he went off for 17 in the second half and nearly reached his average with 19. But he was 7 for 18 from the field, 1 for 5 from three. Langevine, the league’s leading rebounder with a 10-2 average, snagged 13, including five off the offensive boards. The Rams grabbed 18 offensive rebounds, most against the Flyers this season.

While Toppin gets all the recognition — his first half dunk was the No. 1 top play of the night on ESPN’s Top Ten — he wishes his roommate received more recognition.

“He deserves more recognition for he does for us,” said Toppin. “And I think by March he’ll get it.”

UD coach Anthony Grant was asked about how good Crutcher is (Toppin and Crutcher were Grant’s first two recruits when he took the Dayton job) and he said, “He is a really good player. You guys have heard me say that before. When are you going to believe me.”

Toppin said the Flyers knew they needed not only a fast start, but a heels down hard on the accelerator.

“We knew they were No. 2 in the conference and we had to put a stamp on what we have going on,” said Toppin. “We knew they had a 10-game winning streak and we had a 10-game winning streak (actually 12) and we didn’t want them to break our streak. Yes, the 17-0 start was a statement, too. Not many teams, good or bad, can come back when they are down 17-0.”

And there was a side show in this one. 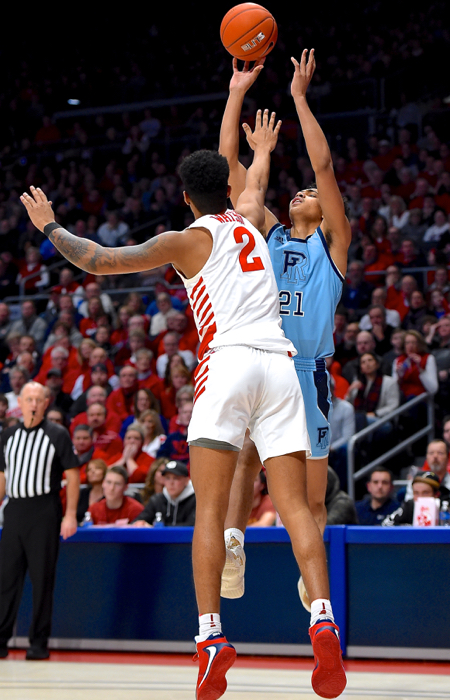 If the name’s familiar…Ibi Watson closes out on the shot attempt of Rhode Island’s Jacob Toppin…Obi’s brother.

Obi Toppin’s younger brother, Jacob, is a freshman who comes off the bench for Rhode Island.

He and Obi talked a lot of smack via texts before the game. Obi won, hands down and hands up.

The first time little brother tried to take a shot, big brother smacked it right back in the his face.

“I couldn’t little brother score on me,” said Obi. “I couldn’t let that happen.” Later on, Obi finished a fast break with a slam dunk with Jacob trailing him, knowing better than to try to stop it.

Toppin’s mother and father were in the stands, with other friends and relatives.

“My mom wore a shirt that was half Dayton and half Rhode Island,” said Toppin. “She sat behind our bench the first half and moved to Rhode Islands’ side the second half. Don’t know why she did that? We were up 20 at the half.”

While the Flyers didn’t miss a shot while building that 17-0 lead, Grant said it was the defense that made the difference.

“We really played solid defense in those first five minutes and that’s what we have to do to continue to have success,” he said. “We do it very well in spurts, but we have to work hard to get better at it.” 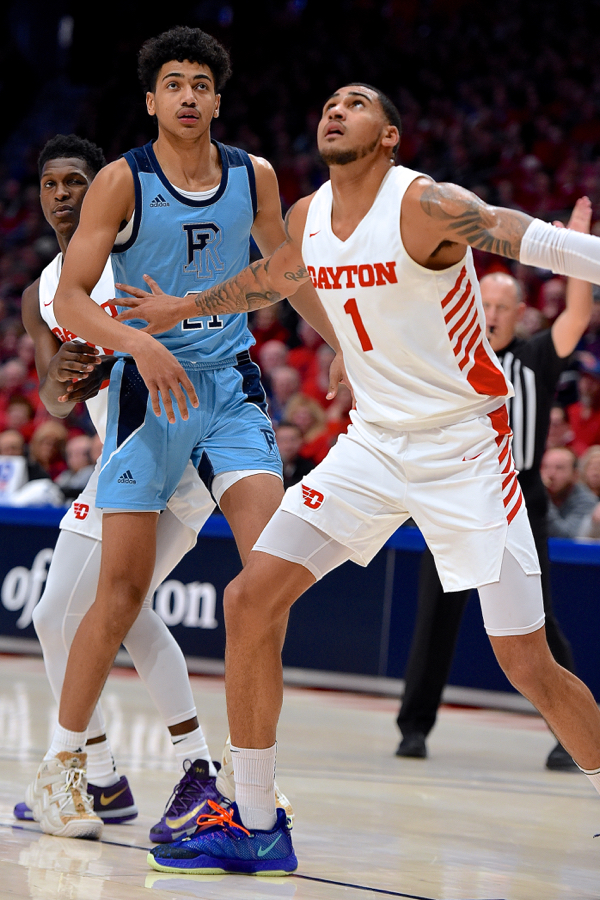 The Toppin brothers shared a moment in the paint – Jacob (left) and Obi (right). 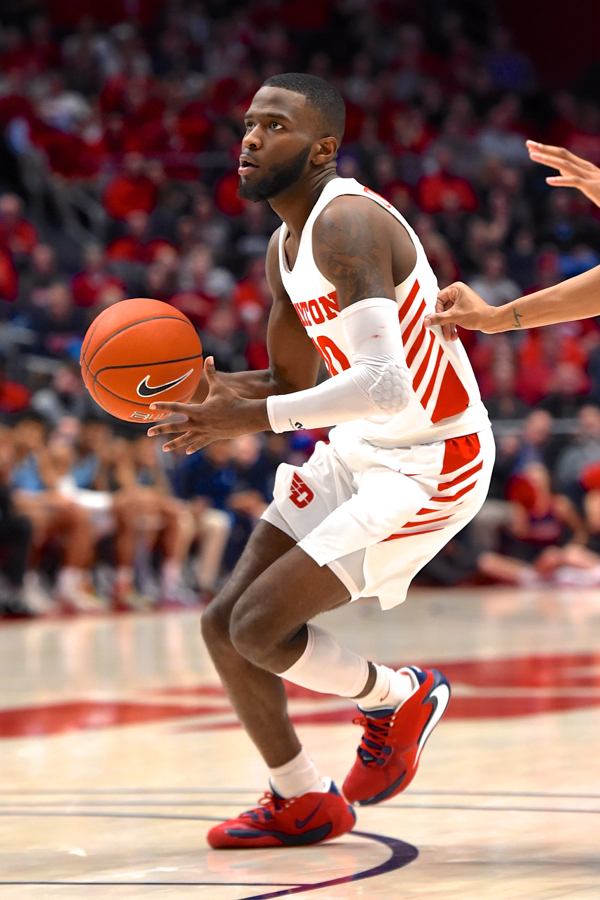 Jalen Crutcher shot 5 of 7 from the field, 2 of 3 from three-point range, in the Flyers' 81-67 win over Rhode Island. (Press Pros Feature Photos by Julie McMaken Wright)