A Scramble For Tipp…But The Red Devils Get By Sidney

The way they did it was hardly indicative of their record.  But somehow, the Tipp girls did enough things right Wednesday to beat Sidney…and stay unbeaten in the MVL.

Tipp City, OH – Tipp coach Andy Holderman was nearly at a loss for words Wednesday, when following his team’s 54-44 win over Sidney he was asked, “Why was that so hard?”

The politically correct answer would have been, of course, that Sidney (15-6, and 12-5 in MVL) is a vastly improved basketball team under Jamal Foster, a high energy guy who spews ‘can do’ with his every breath.

The cultural answer would have been, of course, that Sidney scratched and clawed and fought and got in the way enough that Tipp found it hard to get a clear path to the rim…which was true.  But for all that, they got there enough to win their 17th game of the season, their 17th in the MVL, and remain unbeaten with the league title already in hand.

But none of these thoughts came to Holderman’s mind, who was anything but happy with the way his team responded. “It was one of those deals where we did some nice things at times, but we were sloppy.  We did things we typically don’t do.  They want to speed you up, and they did.  We bit into it…and I don’t know.  At this point in the season it was disappointing, but we came away with a win.  That was our reward.”

It wasn’t that Sidney played that well, because they didn’t.  They played hard, yes.  But they didn’t play smart…free-lancing too much, struggling when they couldn’t get out and run.  And after freshman guard Allie Stockton hit a three-pointer for the first points of the game, the ‘Jackets never led again, trailing 16-6 at the end of the first quarter…and 24-12 at the end of the half.  They struggled to move the ball in the half court, allowed Tipp’s guards to push Stockton too far away from the rim, making it difficult to initiate offense.

And when Tipp played zone at the outset of the third quarter to keep Stockton from taking the ball to the rim on her own, Sidney got just nine shots for the quarter.  But,  junior forward Samantha Reynolds took advantage of some poor help defense by Tipp to score on three consecutive possessions, and 6 of her eventual 12 points for the game. 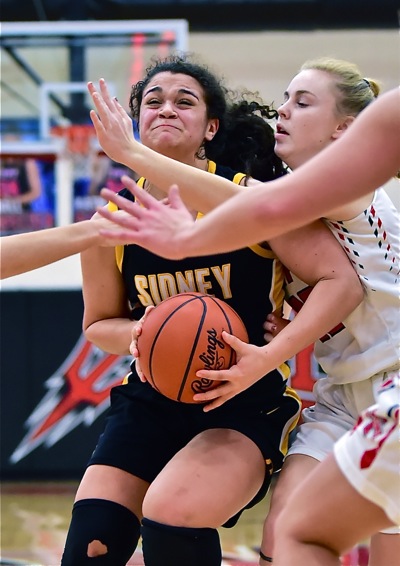 Sidney freshman Allie Stockton scored a game-high 20 points, but had to face a gauntlet of hands and arms to do it.

Still, Tipp scored 15 points in the third quarter, thanks to a combined 12 points from Ashleigh Mader and Kendall Clodfelter, to lead 39-24 at the start of the fourth quarter.

Sidney applied pressure – a full court press – that saw Tipp do the very things that Holderman talked about.  Sidney sped them up. Tipp tried to play faster than necessary – they bit into it.  Against pressure you want to get the ball into the center of the court, but Sidney somehow forced the ball to the sidelines where they trapped and caused confusion…and turnovers.  Tipp looked like anything but a 17-4 team, or unbeaten.

“They all rushed to the ball,”  said Kendall Clodfelter aftewards.  “You looked up and there were three or four girls around you, and you couldn’t see the court.”

Sidney whittled away at the lead, Stockton scoring 7 for the quarter, Reynolds scoring 6, and teammate Peyton Wiley, a sophomore guard, had 5.  They cut the lead from 15 points to 8, before being forced to foul in the final two minutes.  At that point Clodfelter, Mader, and Rachel Wildermuth went to work, hitting 9 of 13 free throws to salt the game away…54-44.  There are no other words but to say.  It was a scrambling win for Tipp, as Sidney gave them one devil of a time.

Tipp is having a fine year…17-4 overall, and remarkably, through 17 league games unbeaten against the likes of Piqua, Sidney, Troy, and Butler, twice each.  In their first meeting with Sidney a month ago, they came out of that one winning 50-39.  So to have a game or two where you have to scramble is hardly front page news.

“It’s a nice feat for us right now,”  said Holderman.  “Of course, the goal is to be 18-0 (they have one remaining league game with Butler) and the teams in this league are getting better and better.”

Piqua, for instance, is having its best year in a decade. 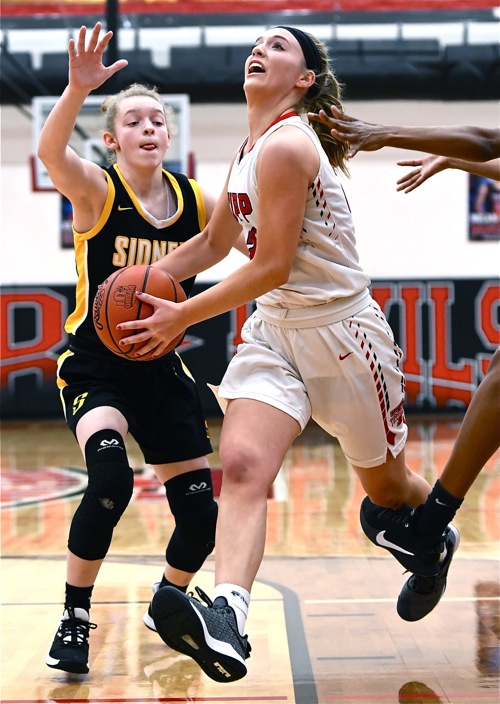 The little things can trip you up…but Tipp’s Ashleigh Mader swept through the Sidney defense to score two of her 15 points.

“There’s a target on our back, we know it, and we’re getting everyone’s ‘A’ game.  And our advantage this year is we have six players who have all scored 13 points or more in a game.  So we’ve got enough weapons to spread it around if someone’s having an off night.”

It was rough, of course.  Scrambling games always are.  Bodies hit the floor, went flying, and when Kendall Clodfelter finally emerged from the locker room she was red under one eye and had two fingers taped together – the signs of a struggling win.  She, like Andy Holderman, acknowledged that a win is a win, but this one came hard.

“I’m not so sure we were ready tonight,”  she added.  “Tonight was senior night, and I don’t know if we lacked focus, but I think we were distracted, we didn’t rebound very well, and our help defense was bad – not like it usually is.

“Plus,” she added, echoing Holderman, “this league is getting better and better.  We’ve been playing them since I was a freshman, and they’ve gotten better every year.  And it’s really hard to beat teams twice, because you think you know someone and on a given night they play better than you remember, if that makes sense.  You have to prepare really well, and prepare to play every night.”

Tipp finished with three players in double figures:  Ashleigh Mader had 15, Rachel Wildermuth and Clodfelter each had 12, and Katie Hemmelgarn had 7, and the only other senior on the team, Katie Salyer finished with 6. 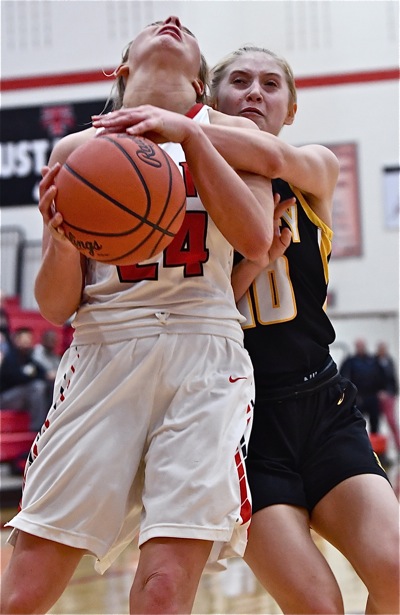 It wasn’t easy…Sidney’s Peyton Wiley put the strong-arm on Kendall Clodfelter as she tried to score.

Down the hallway Jamal Foster was hurrying to get to the bus and beat the ice storm back to Sidney.  But he took a few minutes to compliment the effort of his kids, who like Tipp, did not play their best, even though his talented freshman, Allie Stockton, scored 20 points, Samantha Reynolds scored 12 (all in the second half), and Peyton Wiley had 7.  Combined, they had 39 of Sidney’s 44 points.

“First, that’s a really good basketball team,”  Foster said, complimenting Tipp.  “But I’m very passionate about basketball, our girls imitate that passion, and sometimes we go out and try to create an identity (for playing hard) without doing the things that help you win.”

They missed shots, failed to box out, were slow in their defensive rotations…and yet, they played hard enough to have Tipp scrambling to hold on in the fourth quarter.

“It’s a little bit of youth and inexperience,”  Foster explained.  “We have a lot of players seeing varsity time for the first time.  So we try to create tempo, speed teams up, and force turnovers to get some easy buckets.  We’re a better team when we can get into transition.  Hopefully, we get there soon where we have the kind of poise you need to beat a really good team like Tipp City.”

As she gathered her stuff to leave, Kendall Clodfelter was asked if it was easier than the first time they played Sidney.

“No,”  she said, heading out into the ice and cold.  It was that kind of night – as hard to get home, as it was to beat Sidney.

‘The Spot’ Restaurant, in Sidney, is proud to be the presenting sponsor of the 2020 OHSAA State Basketball Tournaments on staging.pressprosmagazine.com. 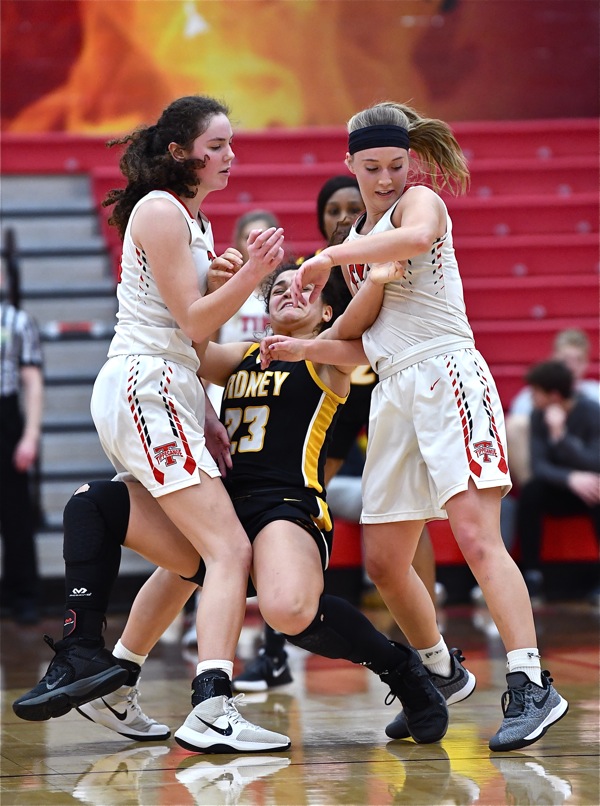 There were bumps, and it was a grind. Sidney's Allie Stockton feels the business end of a Red Devil 'double-team' in the open court. (Press Pros Feature Photos)