McCoy: Trey Landers, The Glue That Solidifies The Flyers

It’s been written that Trey Landers may be the most underrated player in the country and is the glue that holds the team together.  And he proved that Saturday as the Flyers stuck together, when it counted, to beat Fordham. DAYTON – A national college basketball writer penned a piece early this week and said, “The University of Dayton’s Trey Landers may be the most underrated player in the country.”

A coach, who was not named, told the writer, “Landers is the sort of glue guy who will get overlooked on the scouting report but will make a key play late in the game.”

That coach is only saying what any University of Dayton fan already knows. Except for one thing. Landers doesn’t just make a key play late. He makes them throughout the game.

There was sharp evidence Saturday afternoon when the Flyers staggered a bit in the second half before putting away Fordham, 70-56.

It isn’t often that UD can win a game when one starter is scoreless and another starter scores three points.

Jalen Crutcher, who had scored 18, 21 and 24 points in his three previous games, scored three. His contribution was six assists and a steal.

It was Trey Landers, the muscular senior from Huber Heights, rescuing the day. He scored 18 points and snagged eight rebounds.

UD coach Anthony Grant knows what Landers is all about. It starts with a ‘w’ and ends with ‘g’ and is called winning. 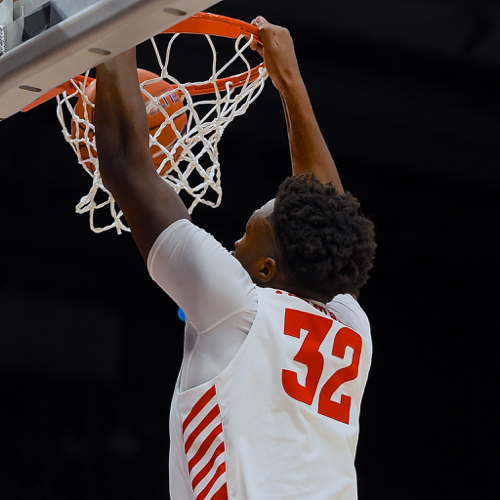 Jordy Tshimango showing his talent at the rim.

“I haven’t seen everybody in the country, but I know I appreciate him,” said Grant. “We don’t underrate him on our team. I know our guys appreciate everything he does and understand his value.”

When asked about being the most underrated, Landers said, “The most what?” He was told about the story and what the anonymous coach said.

The seventh-ranked Flyers are now 20-and-2, 9-and-0 in the Atlantic 10 conference. Grant was asked if he thought this team would have 20 wins on February 1.

He smiled about the width of the Great Miami River and said, “We did it.”

It wasn’t one of their shinier moment, this 14-point win over a Fordham team that is 1-and-8 in the A10 and was a 24-point underdog to the Flyers.

It looked more than presentable in the first half when the Flyers took a 36-17 lead. Fordham was 1 for 9 from three and the Flyers had 12 assists of their 13 baskets. 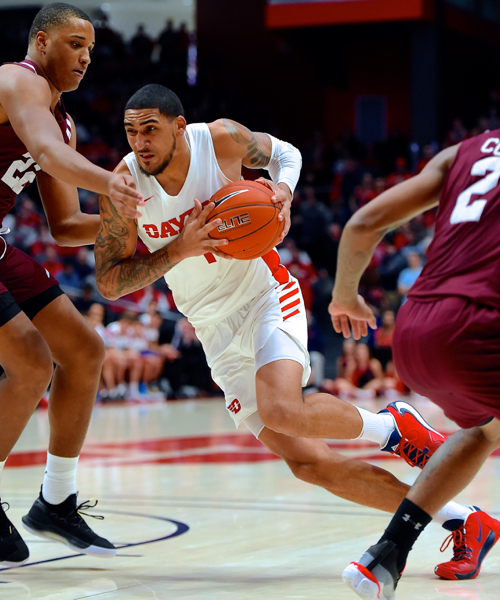 Obi Toppin had 18 points, six rebounds, and  three ‘dunks’ in the Flyers win.

It was similar to Wednesday’s game at Duquesne when the Flyers frittered away a 19-point lead and nearly lost.

This one was never in danger, but a poor Fordham team outscored the Flyers, 39-34, in the second half.

“It isn’t really that tough playing a team like Fordham,” said Landers. “You want to perform with consistency. It gets tough at times when we get a big lead and we fall back and the other team starts to come back on us.

“Our biggest thing from here on is that when we have a 15 or 20-point lead we have to put our feet on the other team’s neck and turn that into a 30 or 40-point lead. The coach has been preaching that as well. If we focus on that, we’ll be above everything.”

The anonymous coach in the article said Landers is the team’s glue and if that’s so, it most certainly is Gorilla Glue because Landers is that tough. 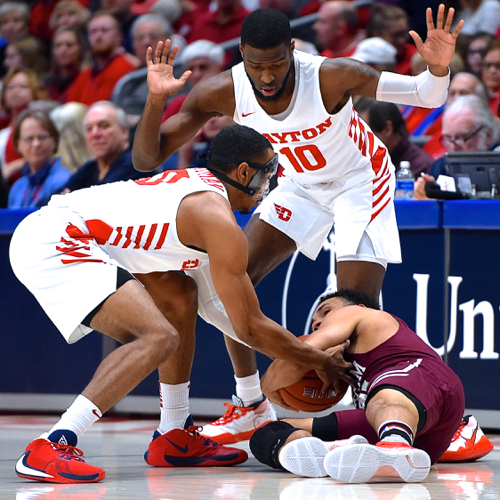 Rodney Chatman tugs for possession of the basketball.

“That’s what the people say, that I’m the glue,” he said. “I try to keep my teammates together, be a vocal guy. I’m a veteran, so I try to pass my wisdom down to my teammates and it is working out in our favor. Everybody calls me the glue and I take pride in that.”

Nobody is prouder of Landers than Anthony Grant.

“Trey has been through a lot in his life. As a young guy he has had to overcome a lot personally and from a sports standpoint,” said Grant. One of them was the murder of his father when Landers was very young.

Landers was 6 for 8 from the field (1 for 2) from the three-point line, which is pretty much even par for him. He doesn’t look for shots, he lets them come to him. He is shooting 61 per cent for the season on 94 for 154.

“Coach told me before the season, ‘Know what your role is,’” said Landers. “That’s the thing about good teams. Really good teams have role players. It makes the team better. You never see me try to break a guy off and go one-on-one. I don’t play like that.

“I take open shots, get baskets on transition and play defense,” he said. “I try to embrace my role. I am shooting better, but that’s just me taking my time and going to the gym and raising my confidence.”

Asked what his role is, he ticked them off on his fingers: “Defense, transition and defense again. I get the ball to the point guard and get into transition. Offensively, I just cut for the basket. I’m slasher.”

And he has left slash wounds on teams this year from coast-to-coast. 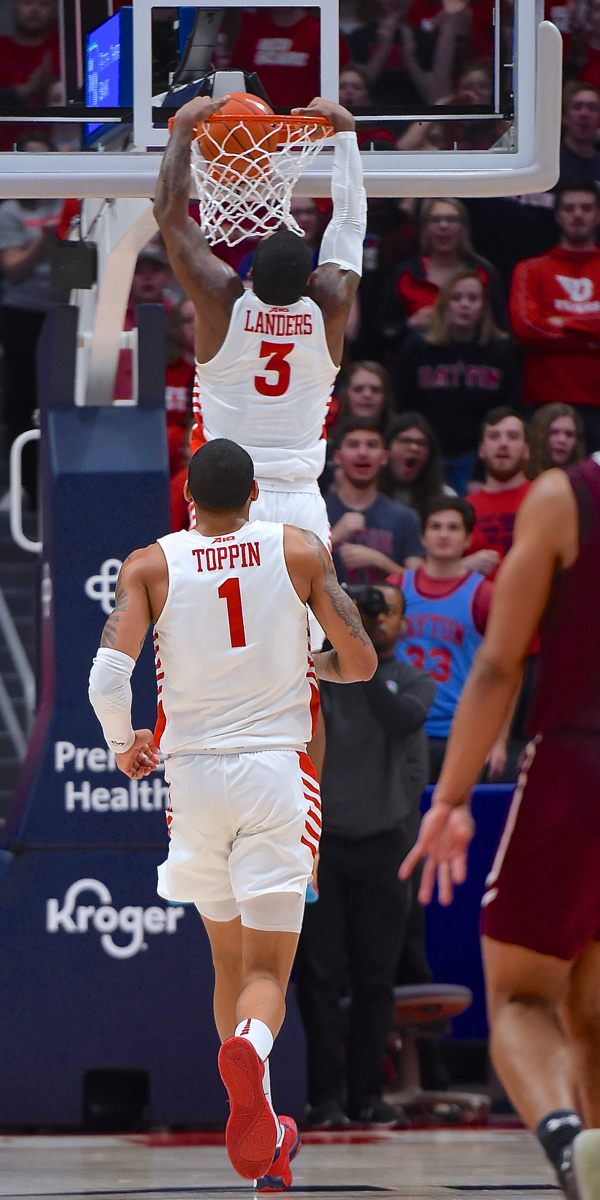 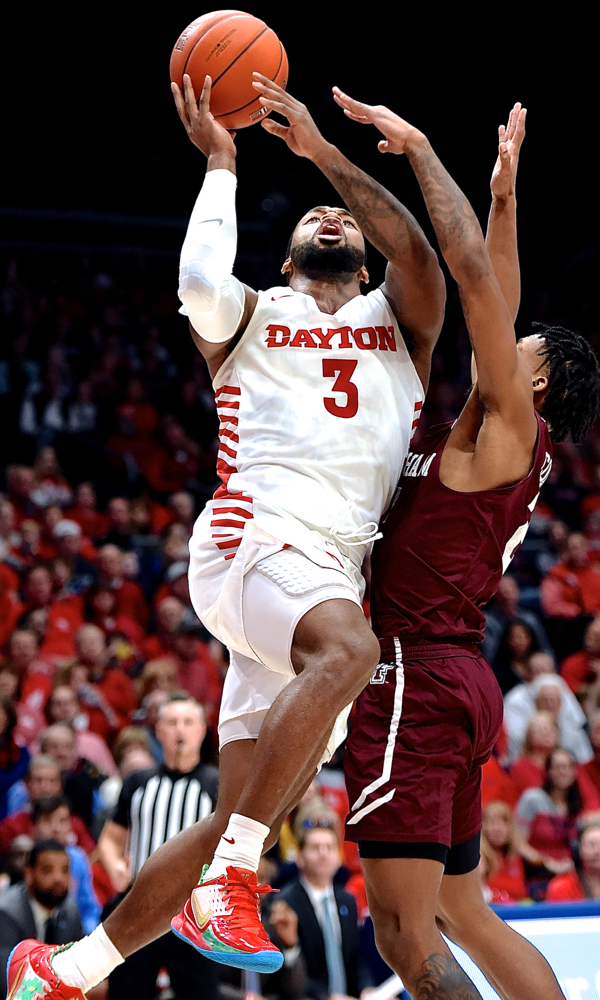