Sidney let a nine-point lead get away in the second half, but turned up the defensive pressure down the stretch to win for the 6th straight time.

Vandalia – It is never easy for visiting teams to win at Vandalia Butler’s Student Activity Center.

It doesn’t seem to matter what type of year the hometown Aviators are having, they just seem to make it tough on whoever might be wearing the dark jerseys on a given night.

That is what makes what Sidney accomplished Tuesday night so remarkable.

Leading by nine early in the third quarter, the Jackets offense went into the deep-freeze, scoring just 6 points over the next 10 minutes as Butler clawed back to tie the game. At that point, however, momentum swung back to the Jackets, who shut out the home team over the final 4:23 to win 51-42, their 6th straight win overall and over Butler on the Aviators home floor. 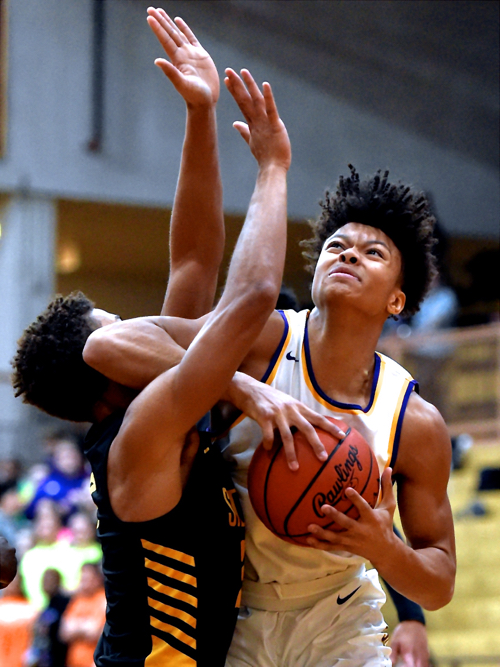 Double trouble – the deuces get tied up in play – Jacket #2 – Lathan Jones gets tangled up with Aviator #2 – Matthew Beverly.

Now, make no mistake. None of those wins have been easy. Sidney’s winning margins in the previous five games was 1,8,1 in overtime, 2 on a last second shot, and 5 in overtime. Nonetheless, very few teams can claim 6 straight wins over Butler in that building.

“We hung in there,” Sidney coach John Willoughby said. “The kids fought through a lot of stuff tonight. Butler is hard to guard. They have good guards, and anytime you have good guards you are always going to be in the game.”

Tuesday night’s game was a tale of two halves. Darren Taborn scored 6 points in the opening quarter and Trey Werntz added 5, but Butler rallied late in the period to take a 16-15 lead after 1. The second quarter remained a close affair with Sidney getting a bump from sophomore Jaden Swiger, who scored 6 points in the quarter on his way to a 10-point night.

The Jackets seemed to benefit from an officials call at the end of the half. A put-back on a missed three appeared to come after the buzzer, but the shot was ruled good, and after a lengthy meeting between the referees, the call stood.

Werntz nailed a three in the opening minutes of the third quarter to give the Jackets a 36-27 lead, but Sidney went cold the rest of the quarter and Butler clawed back to within three behind a pair of baskets from Cooper Justice and two more by Nick Smith.

Butler had several empty possessions down by a basket before Tyler Montague scored on a drive to tie the game at 42 with 4:23 left. That was the last time the home team lit up the scoreboard, as Sidney scored the final nine points of the game to improve to 15-1 and 12-1 in the Miami Valley League’s Valley division. They remain two games ahead of West Carrollton, which kept pace with a win over Tippecanoe. 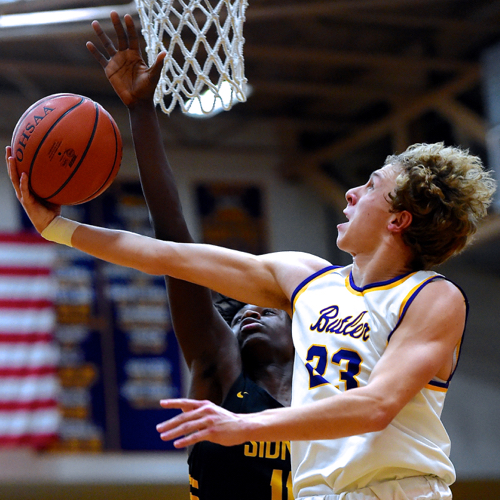 “This is a big win for us,” senior Darren Taborn said. “We know it’s always going to be a battle here. We came out strong and did what we had to do for the win.

“Things got away from us in the second half. We started playing slower and weren’t as aggressive. Then we changed our mindset and that allowed us to get the win.”

The numbers weren’t pretty on either side. Sidney shot 39% from the floor, Butler just 32%. Both teams were atrocious from long range—Sidney 2 of 16 and Butler 3 of 14. Neither team had many chances from the stripe—Sidney 5 of 8 and Butler 7 of 10.

Sidney did have a big advantage on the boards, out-rebounding the taller Aviators 33-20. The Jackets had 13 turnovers to the 9 for Butler.

“We did a good job in the post,” Willoughby explained. “Beverly (6-4 senior Matthew) has been killing people the past few games, and we did a really good job on him. Lathan Jones, Avante Martin helping out, and Jaden Swiger all did a real good job on him tonight.” 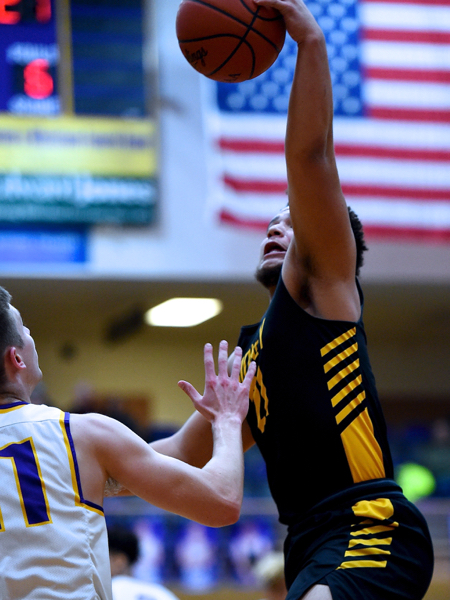 Sophomore Jaden Swiger scored 6 points in the second quarter , with a total of 10-points for the night.

Beverly finished with 4 points, 6 below his season average.

“We got a lot of offensive rebounds in the first half, and that kept us in it. We told them at halftime let’s try to make the first one,” Willoughby said with a smile. “We missed five or six bunny shots in the first half, but scored on putbacks, so we didn’t lose any points there.

“The second half was just sluggish. Both teams battled hard and were trying to execute, but things got a little sloppy for us. We seem to like to play that way. Our late game situations are getting better and we are getting the ball into the hands of who we need to late in games.”

Werntz led the Jackets with 16 points, while Swiger finished with 10 and Taborn added 8. Butler got 15 from Justice and 14 Montague, but just 13 from the rest of the team combined.

“Trey has been playing well for a while now. Smart defensively, great helper on defense, and he got us some big baskets early. Jaden had a good match-up tonight, it was his night, he battled inside and his teammates made some nice passes to set him up for layups.”

The coach, who won his 400th career game earlier this season, is comfortable relying on his defense to win games.

“We aren’t afraid to play these kind of games. We know we are going to have games like this in the tournament. I have coached this way my whole career, having to play close to win. We just need to continue to work on executing at the end of games.”

Not many thought Sidney would be 15-1 at this stage, but that they are with home games against an improving Xenia on Friday and 10-win St Marys Saturday coming up this weekend.

“The key has been our chemistry,” Taborn said. “We go to practice every day and work hard to get better. We work on defense more than anything else in practice. Coach Willoughby preaches defense all the time. Our practices are very competitive, and that is why we are 15-1.” 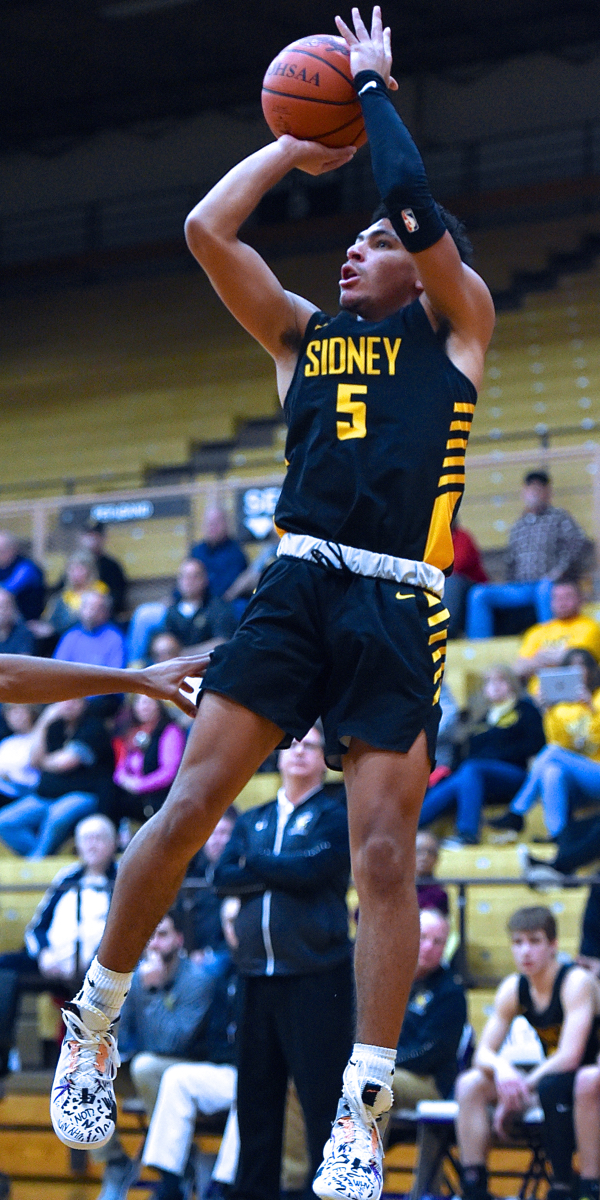 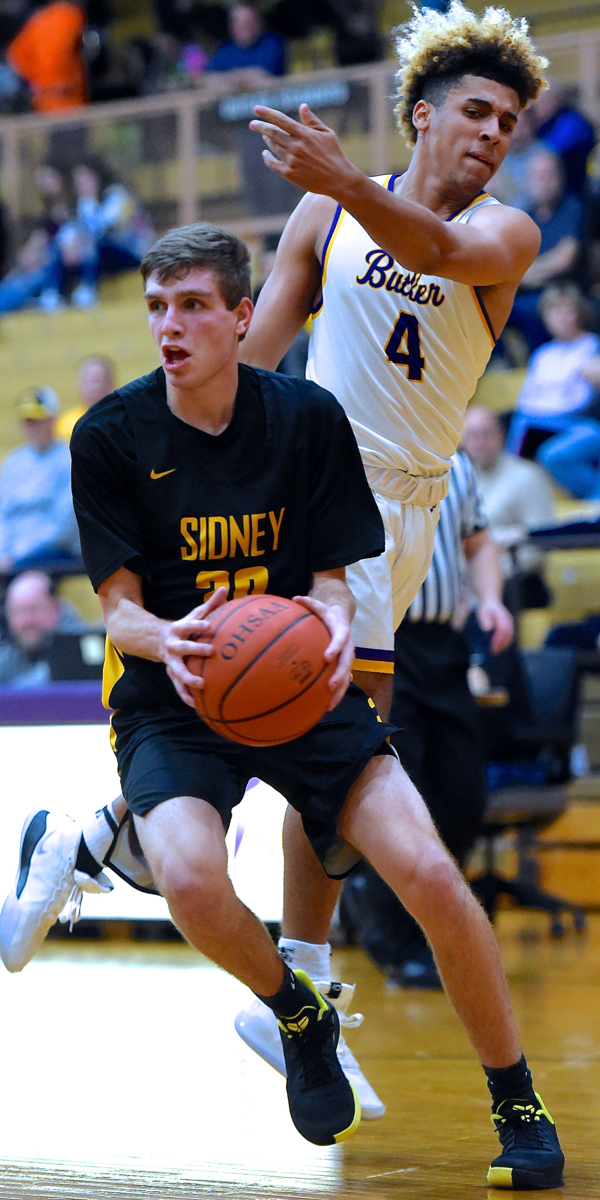