Versailles faced a difficult three-game stretch this week that left the Tigers battle-tested … but not beaten. Versailles used a pair of clutch free throws from Michael Stammen to hold off Fort Loramie’s upset bid.

Versailles, OH – Ryan Martin gingerly walked down the Versailles High School hallway Saturday night. Martin’s right knee was wrapped and he had a slight limp as he talked to a friend slowly matching his pace.

If you needed a way to sum up the boys basketball team’s week then Martin provided the image. The Tigers played three physical games in five days. They were banged around. They were bruised. And they were nearly beaten.

But in the end the Tigers stood tall and came out of the week grinning despite dealing with a scare or two. Just like Martin. When asked if missing time was a possibility, Martin smiled.

Martin could have easily been talking about the final minutes of Saturday night’s 36-35 victory against non-league rival Fort Loramie. Every team wants to be the one that severs Versailles’ undefeated season. The Redskins was 8.5 seconds away from doing it on Tigers’ home court. But the Tigers didn’t waver. 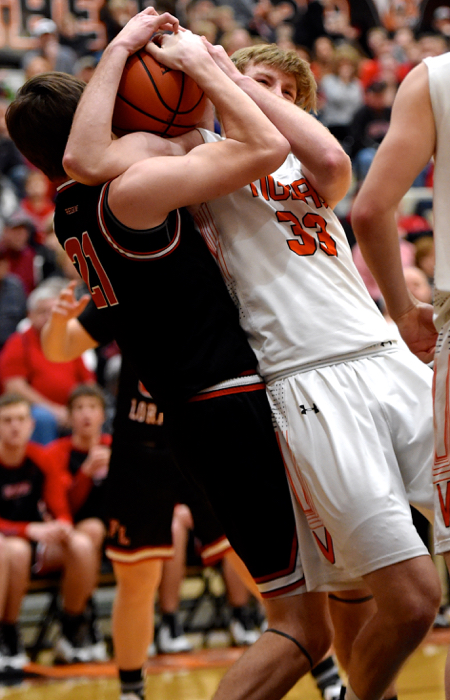 Every possession was important, as demonstrated by Loramie’s
Caeleb Meyer (left) and Versailles’ Austin Toner.

Versailles trailed 35-34 with 1:20 left and needing a defensive stop. It came on a Martin steal near the top of the key. The Tigers kept possession and ran the clock down to 8.5 seconds. That’s when Stammen was fouled as he started to drive the lane. He made both bonus free throws for the 36-35 lead, the Tigers’ first since 6:25 of the fourth quarter.

“After I hit the first one, relief settled in,” Stammen said. “When I made the second one we felt comfortable.”

“He told me he was going to make it, so I said okay,” Versailles coach Travis Swank said when asked what he told Stammen prior to the tosses.

“He’s got determination to never let this team lose. We need players like that. If you’re determined not to lose you’re going to find ways to win no matter how ugly it is.”

Stammen committed a foul near half court with 3.8 seconds left to disrupt the Redskins’ as they raced up court for the final shot. With time for one final play, Loramie junior Nate Meyer inbounded the ball to junior Grant Albers in front of the Redskins’ bench. The Tigers’ defense contained Albers, who passed back to Meyer for the unsuccessful NBA-range three-pointer at the buzzer.

“We were hoping to get something out of it and they did a nice job of taking it away,” Fort Loramie coach Corey Britton said. “We got a good look at it. Shoot, an uncontested three-pointer at the horn. That was the second or third option. It just didn’t go in.”

Fort Loramie (10-4) held Versailles (17-0) to a season-low 36 points. Marion Local is the only other team to keep Versailles under 40 points through 17 games. The Redskins’ effort was a confidence boost knowing they can slow down the No. 1-ranked Division III team in the state. But there was one kind of victory … and one kind only … that Fort Loramie wanted Saturday night.

“We’re heading in the right direction but there’s no moral victory at this point of the season,” Britton said. “We’ve got to make plays down the stretch. We played really well defensively. Shoot, we gave up 36 points and made life hard on them. We just didn’t make enough plays. But I love our kids fight.” 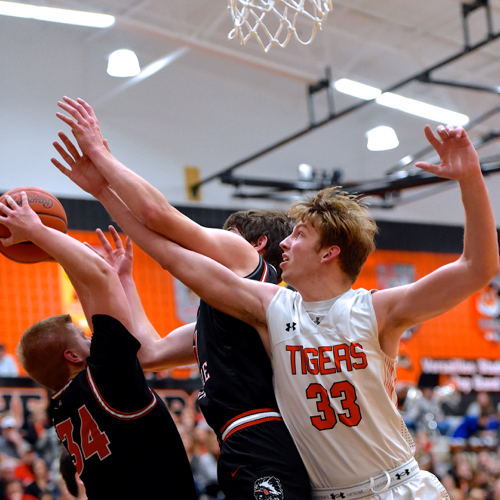 Fort Loramie’s Nolan Berning (34) and Caeleb Meyer (middle) crash the boards to grab a rebound away from Versailles’ Austin Toner.

There were five lead changes in the game even though no team led by more than five points, and that came with in the first 2:15 when Fort Loramie opened with a Nick Brandewie three-pointer and basket off a Caeleb Meyer steal. The lead never went past four points for either team the remainder of the game.

Stammen led Versailles with 15 points, including consecutive three-pointers in the final 49 seconds of the third quarter to give the Tigers a 30-28 advantage.

Fort Loramie — led by Caeleb Meyer’s 17 points — responded in the fourth with a Brandewie basket, Caeleb Meyer three-pointer and Nate Meyer free throw for a 35-32 lead with 3:59 to go.

But Martin grabbed another steal and as he sprinted down the lane Albers gave him an intentional … but not a malicious … push in the back to prevent the score. Officials called the intentional foul. Martin hit both free throws to pull the Tigers within 35-34 with 2:59 left. 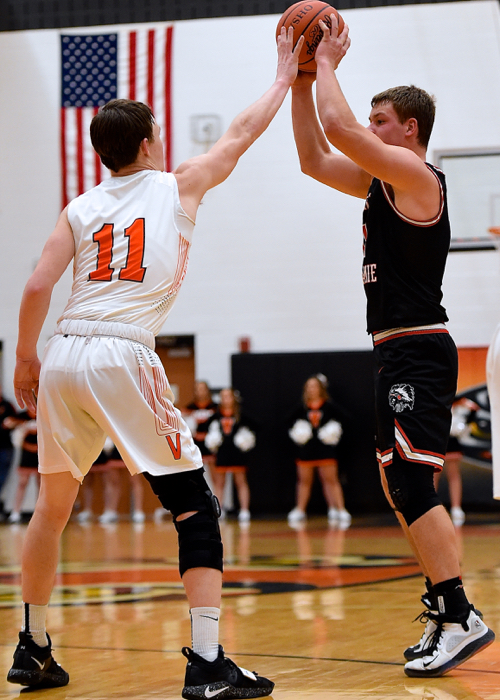 Nick Brandewie of Fort Loramie sizes up Versailles’ Ryan Martin as he looks to pass.

“We all just play together,” Martin said describing the reason for the Tigers’ success. “Michael is our leader and he’s one of the best players around. We’ve all been playing together since fourth grade.

“It’s one our rivalries and this is one we wanted really bad. I feel like we keep getting wins and the target on our back keeps getting bigger. But we’re up for the challenge.”

The game was played in front of a packed and enthusiastic crowd that provided a tournament atmosphere. That the communities are separated by about 13 miles – putting them in different counties and conferences – doesn’t put much separation between their at times heated rivalry.

“This is what high school basketball is all about,” Britton said. “You’ve got an undefeated team at home and their crowd came out and supported them. I thought our crowd was really, really good tonight. The gym was electric. It was a good tournament environment and hopefully we’re better for it down the road.” 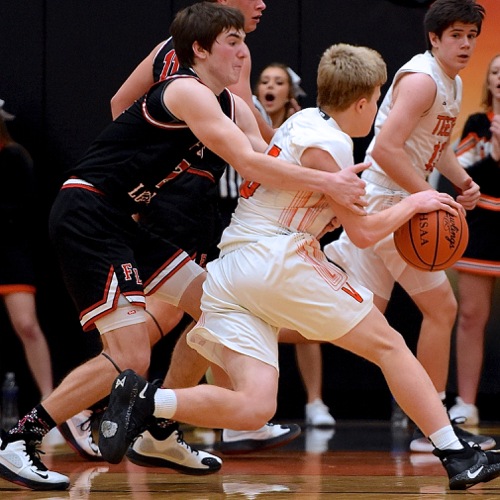 Versailles travels to Minster next Friday in a Midwest Athletic Conference game and then visits Anna of the SCAL on Saturday. It’s a grind the Tigers are familiar with. Last Tuesday they gutted out a 53-45 overtime victory against a quicker and taller Butler team. On Friday they held off a talented and physical Parkway team hungry for a MAC championship 57-50. And Saturday was more of the same against the Redskins.

“We’re just grinding through things,” Swank said. “We’re just using a lot of grit and determination to get through some of these games. Basketball is a long season so you gotta have that every night. If you don’t you’re going to slip up and get beat. So far they’ve brought it every night. That’s all you can ask as a coach.

“There really is no pressure because we’re just trying to win the next game. The next game is the most important. That’s our focus.” 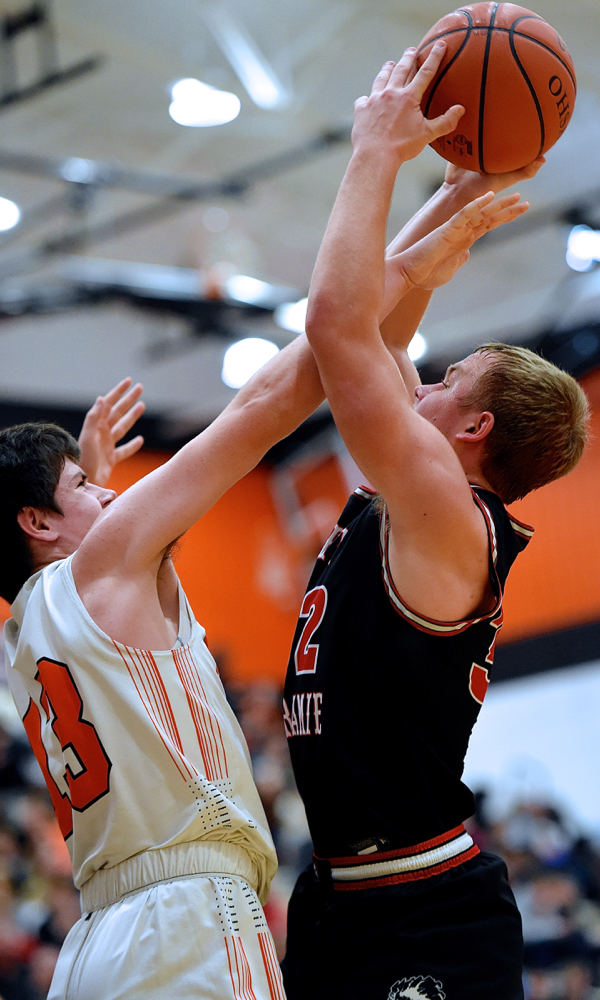 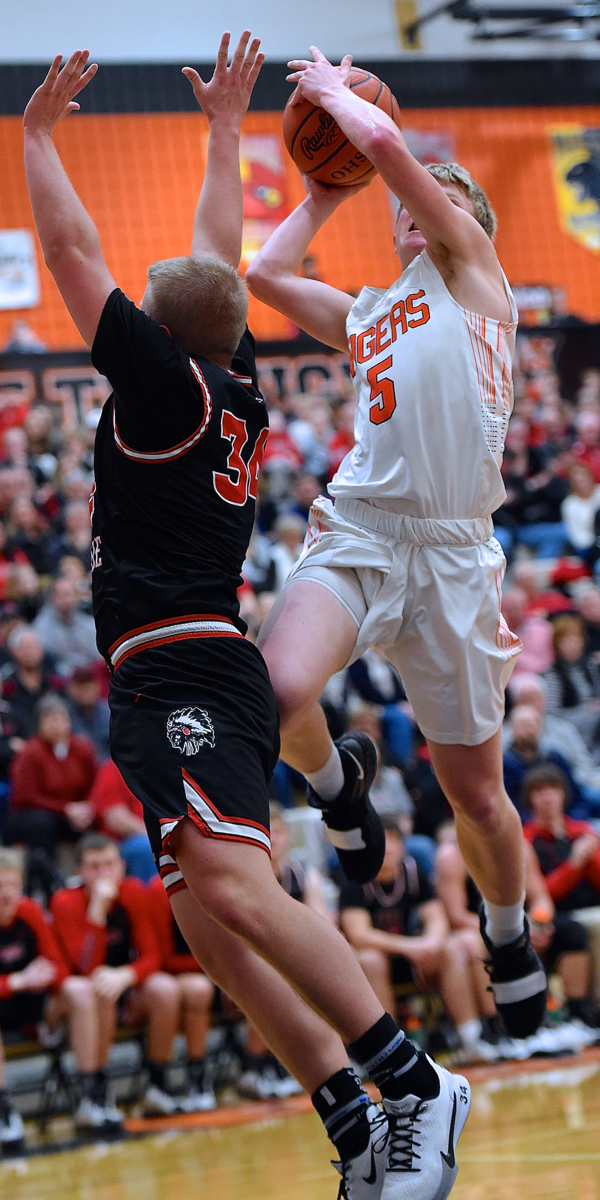