A Challenge To Be Best…Versailles Turns Back Parkway

For a half Parkway played #1-ranked Versailles even, and posed a legitimate threat.  But hot shooting by the Tigers in the second half and Parkway’s inability to make shots kept Versailles atop MAC standings all by themselves.

Versailles, OH -Without question the Parkway Panthers got off the bus with upset on their mind;  or rather, the opportunity to prove they belonged at the top of the MAC standings along with undefeated Versailles, the state’s #1-ranked team in Division III.

We hadn’t seen them in five weeks…since December 20, when Versailles locked up with a Marion Local team still trying to shed the feel-good of being state champions in football.  Versailles won that night, 38-34, in a brutal exhibition of basketball survival – hit or be hit, get to the line and make your free throws, and stay between your man and the rim on the defensive end.

Lurking during that same five weeks entering Friday night was Parkway (11-4),  whose four losses were all close, and highly contested.  Winners of eight of their last nine, coach Doug Hughes sought to make a dent, playing off the confidence of having won, himself, against Marion on the road two weeks ago (44-42), when they did what you have to do to win MAC games on the road.  You slug it out and hope to make one more shot than they do at the end.

But you can’t win 15 consecutive games without taking seriously any and all challengers, and after a sluggish start that’s exactly what Versailles was able to do Friday, putting on a spectacular shooting show in the second half to ultimately win, 57-50. Travis Swank (Versailles coach) preaches balanced scoring, and balanced contribution, and that’s exactly what he got, highlighted by senior guard Michael Stammen’s 20 points.

But for the first three minutes Parkway did make a dent, scoring the first 7 points of the game and then holding a 16-12 lead at the end of the quarter.  It could have been more, but the Panthers gave early indication of a problem that would plague them all night.  They missed a lot of shots at point-blank range;  and they clanked three of their first six free throw attempts. 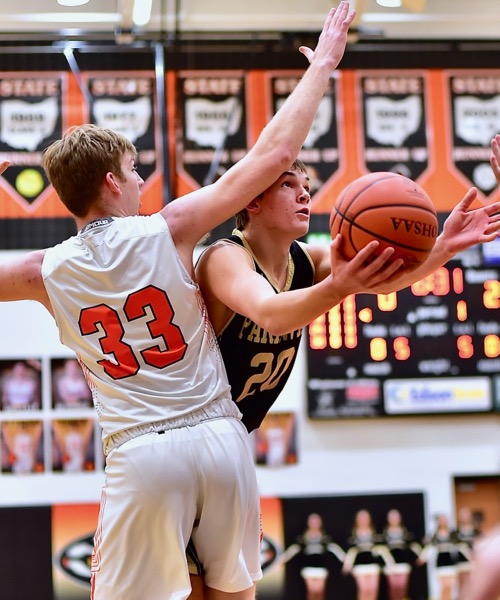 Parkway’s Dylan Hughes got to the rim often enough to score a game-high 23 points.

Versailles took advantage.  While not blistering the nets themselves, Swank’s Tigers tightened up their interior defense, switched to zone, and forced Parkway to beat them (if they could) from the outside.  It worked.  Parkway shot just 22% for the second quarter (3 of 13) while Versailles did a little better, tying the score by the halftime break, 22-22.  They could have had the lead, actually, but a halfcourt three-pointer by Michael Stammen was ruled to have come after the buzzer by referee Frank Vitt.

“We didn’t play our game, and we missed too many shots,”  said Panthers coach Doug Hughes afterwards.  But he hadn’t seen anything, yet.

That trend continued in the third quarter, while Versailles, behind Stammen, began to heat up beyond the three-point line.  Stammen hit a pair of them, while Ben Ruhenkamp hit one, Connor Van Skyock went deep, and Cody Naftzger added a dagger of his own.  At the other end….crickets, as one shot after another by Parkway was short, went long, or was met with considerable resistance at the rim by Versailles’ size advantage inside. 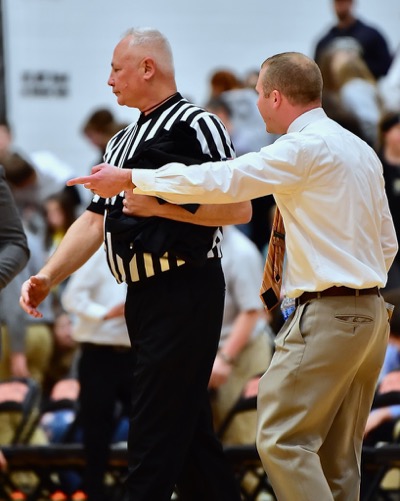 The exceptions, were Caleb Kinney and Dylan Hughes, who kept clawing and digging at offensive rebounds and somehow scored 10 of their 15 points between them to keep it close. Versailles would take a 43-37 lead into the fourth quarter.

A six point deficit is hardly a comfortable margin, and Parkway again had their chances at the outset of the fourth quarter.  They fired away from behind the three-point mark without success, and inside they put up shot after shot off offensive rebounds, but with marginal success.   The 6’4″ Hughes was a warrior, somehow scoring 7 of his game-high 23 points in the final eight minutes;  and Hughes, Kinney, and teammate Nick Hawk got to the foul line 13 times during the period.  But frustratingly enough, they missed, and in some cases missed badly – finishing the game making just 9 of 20 from the stripe.

Versailles, on the other hand, began creasing the Panther defense, Stammen charging right down the middle on successive possessions to score on driving layups.  Ben Ruhenkamp scored on a baseline cut, Ryan Martin scored on a stickback, and like Parkway…they were getting to the line.  And just like Parkway, they missed 5 of 9 attempts – their only 9 attempts for the game.

That alone kept the game within striking range for the Panthers, who trailed by as much as 10 for much of the quarter, and got the margin down to 6.  But missed shots and missed free throws proved too much to overcome, and Versailles held on to win by 7…57-50.

“We just didn’t do the things we need to do to come down here and win,”  said Hughes.  “You can’t beat the #1-ranked team in the state by shooting 9 of 20 from the line and 1 of 15 from three-point range.  And we had multiple breakdowns defensively.   But we’re still growing and we’re still getting better.  We talked about it…you can beat certain teams when you play that way, but you can’t beat Versailles, at Versailles, with those numbers.  If we even shoot 60% from the line we’re within a possession at the end.  All that being said, we still lost by just 7 to the #1 team in Division III, so that tells you where we’re heading, as long as we keep working and continue to grow over the next month.” 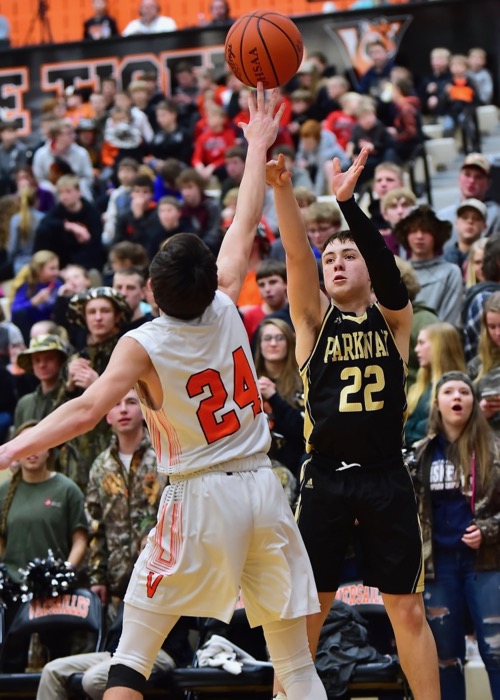 Parkway shot poorly from three-point range, and Versailles’ Cody Naftzger added a finger to their troubles.

Michael Stammen had a phenomenal night, scoring a team-high 20 points, hitting 4 of 8 shots from behind the arc, and slashing to the rim in the fourth quarter when Parkway was in scramble mode, defensively.

“It was a good win for us,” he said quietly after the game.  “A real good win because they’re a good team, they only had one loss in the league, and if they had beaten us they would have tied us.  And it was the first game in two years where I didn’t shoot any free throws.  So to score 20 against a team that good was a big night for me personally.  I’ve been struggling with three-point shooting and it was nice to see some of them go in tonight.”

Three-point shooting was a BIG deal for Versailles, despite their recent woes from distance.  Collectively, they hit 9 of 20 for the game (45%), and half of them during the critical third quarter.  Stammen’s 20 was joined by 12 points by Van Skyock, and 11 points by Ruhenkamp, accentuating Travis Swank’s constant request for balanced scoring and contributions throughout the lineup.  Cody Naftzger had 7 and Ryan Martin finished with 5.

“We talk about it,”  said Swank.  “And tonight it was nice to have more than one around double figures.  They’re a quality opponent, they’ve beaten some good teams, they’re playing well, and they beat us last year, so we had some motivation, as well.  We played with a lot of grit and determination, and that’s how we’ve been winning games. 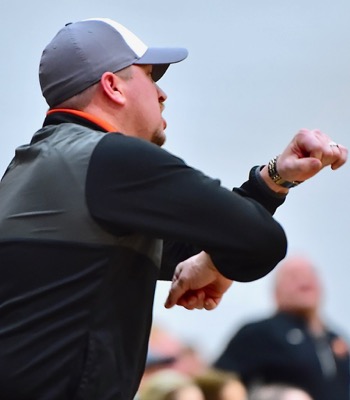 “We’ve struggled from three-point range for the last five games,”  he added.  “Tonight those shots went in, the same shots that looked like they were going in before, but they rattled out.  Tonight it was just in the cards, and we needed every single one of them.  We also did a good job on the offensive boards, and credit to Ryan Martin, who injured his knee at Vandalia on Tuesday…he got a couple of key rebounds and putbacks for us in the second half.”

The story was as simple as this.  In Doug Hughes’ words…Versailles proved again that they were capable of beating a good opponent by playing their game – play with patience, take good shots, rebound, and make the most of your opportunities.

Parkway couldn’t do that, and if they had made a few shots – even some shots – the outcome might well have been different.

“We’ve got to keep on keeping pace with all those teams – Minster, Coldwater and Delphos,”  said Swank.  “They’re all coming up and they’re going to be gunning for us.”

They have Fort Loramie on Saturday, and Minster on the road next week – no easy task.  But come February it’s never easy. It comes with the territory.

With the challenge to be ‘best’. 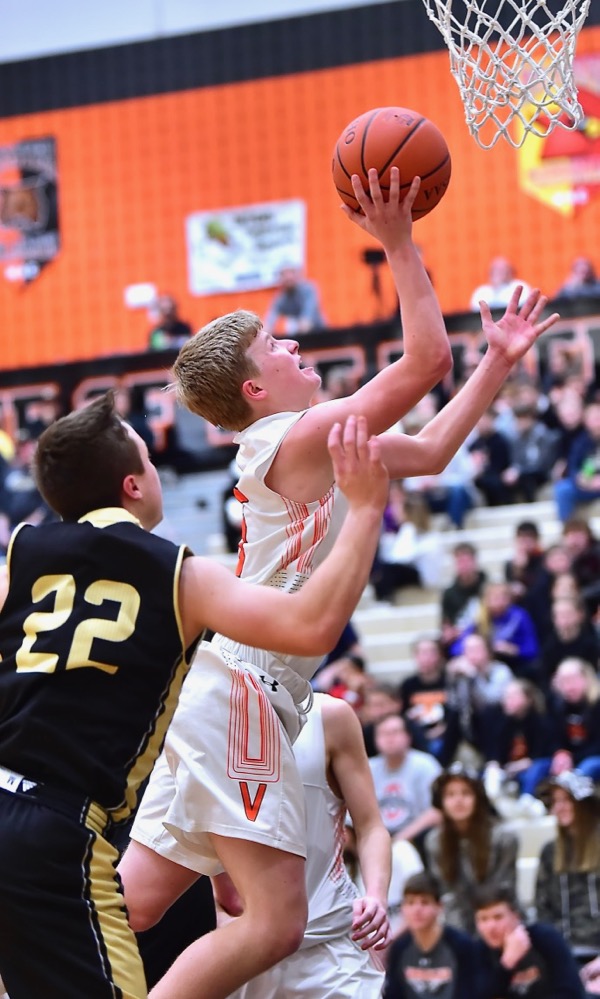 Versailles' Michael Stammen slashes to the rim to score two of his 20 points in Friday's win over Parkway. (Press Pros Feature Photos)