The Flyers, ranked seventh in the country by both the Associated Press and USA Today.  The record, the rankings, the national attention.  Can the Flyers stay level-headed, prevent their heads from expanding to the size of basketballs?

DAYTON — If you are a University of Dayton basketball fan, and who in Montgomery County and several surrounding counties, isn’t these days, when somebody asks you to describe the Flyers the inevitable answer is: “They are fun to watch.”

That is a massive understatement — unless you play for an opponent or are a fan of the opponent. Then it is about as much fun as a root canal without Novocaine.

For 13 minutes, the Bonnies hung around, just enough for them to sniff a possible upset. With seven minutes left in the first half, UD’s lead was a scrawny 25-24.

Then, as so often happens this year, the Flyers suddenly shift into the highest gear possible and leave the opponent choking in their dust.

And from there, it was like, “My Bonnie lies over the ocean.” It was a legal drowning.

The point of emphasis during UD’s breakaway came with 3 1/2 minutes left in the half and the Flyers leading 33-26. 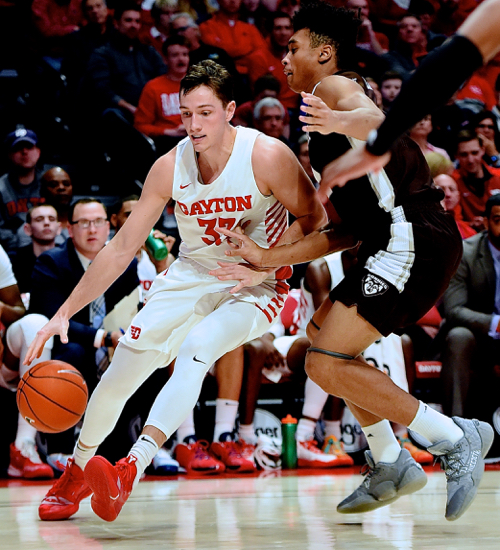 Ryan Mikesell makes a move towards the basket.

Jalen Crutcher was at the top of the lane and he lobbed a pass above the basket and the recipient slam-dunked it home. Nothing unusual there — Crutcher to Obi Toppin for a girder-rattling dunk is commonplace.

Only this time Toppin wasn’t the recipient. It was 6-foot-6 guard Ryan Mikesell bolting toward the rim. And he slammed it home with Toppin-like authority.

And it brought the house down. The Arena erupted and the Flyers disappeared from St. Bonaventure’s view. Just another play that makes the Flyers so fun to watch.

Crutcher, though, didn’t forget Toppin. Obi added five more dunks on his way to 18 points on 9 of 11 shooting. He missed two three-point attempts.

Toppin, of course, is always fun to watch.

Crutcher contributed seven assists and the Flyers were credited with 25 assists — another of the things that makes them so fun to watch. They share the basketball like a homeless shelter passing out biscuits.

Crutcher, just as fun to watch as Toppin, not only distributed the basketball, but he led all scorers with 23. He made 9 of 13 shots and buried five of his nine three-point shots.

What else is fun to watch? Everybody on this team passes the ball and everybody on this team scores. Once again the Flyers had five guys in double figures. Helping out Crutcher and Toppin was Ibi Watson, off the bench with 12, Miksell with 10 and Trey Landers with 10. Landers also had five assists.

So the Flyers, ranked seventh in the country by both the Associated Press and USA Today, pushed their record to 17-and-2, 6-and-0 in the Atlantic 10 Conference.

That is lofty stuff, the record, the rankings, the national attention. It is scary stuff, too. Can the Flyers stay level-headed, prevent their heads from expanding to the size of basketballs? 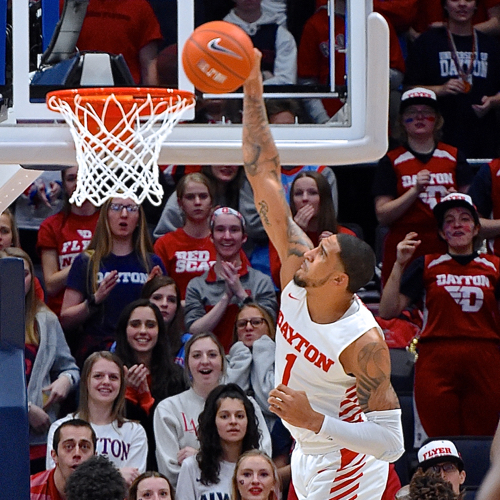 Obi added five more dunks on his way to 18 points on 9 of 11 shooting.

“Ever body is keeping their composure,” said Crutcher, after his third straight game of 20-or-more points. “After it came out that we were No. 7, coach (Anthony Grant) gathered us in a room and told us, ‘Just keep your eyes on the ball and don’t let all this attention get to us.’ And that’s what we’re doing.”

That doesn’t mean the Flyers don’t pay attention to what is swirling around them, especially the rankings — the highest the Flyers have been in 53 years.

“Oh, yeah, for sure we talk about the ratings,” said Crutcher. “We’re trying to make history, first time in the Top Ten in a long, long time. We pay attention, for sure.”

“Everybody on the team keeps an even keel,” he said. “We know we have to go into practice and work hard every single day.

“We talk about it (the rankings), but we know it is just a number,” Toppin added. “Nothing matters until the tournament. And we know we are going to get the best from everybody (opponents) the rest of the season.

“What we’re doing is amazing,” he said. “We have a great group of guys out there and they’ve all bought in to what we have to do to win. We all put each other in great positions on the court to be successful.” 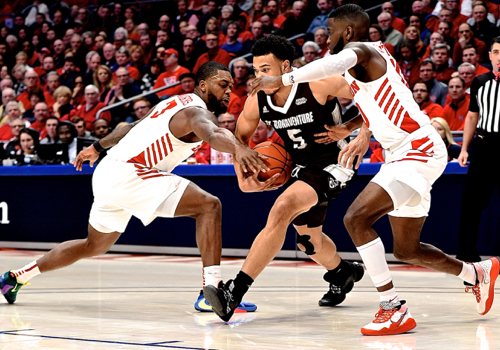 Toppin is the one getting the national attention. The Athletic web-site named him the first half Player of the Year, the best in the country. Again, heady stuff.

“It is great, but I have to give all the credit to my teammates,” he said. “ If it wasn’t for them I wouldn’t be getting the love that I’m getting. They are the reason I get the open shots that I’m getting. We have great point guards, we have great shooters and great bigs that help me do what I’m doing.”

What is it about this team that seems to let an opponent hang around for the opening minutes of a game, then buries it under an avalanche of points — like the 22-5 run Wednesday and the 22-0 run last week against VCU?

“We should be able to do that off the jump,” said Crutcher. “But it seems like, to me, we see how the other team is playing and then we take advantage of things. Coach Grant keeps telling us we need to do that from the beginning.”

Said Toppin of the trend, “We have a really good team and when we’re on the court the first couple of minutes we are feeling what they are doing, the pace, the defense. Once we get that feel we step on the gas and just go.”

Once again the Flyers found the bottom of nets more often than they missed. The nation’s leading percentage team shot 65 percent (35 for 54) and made 10 of 25 three-pointers. 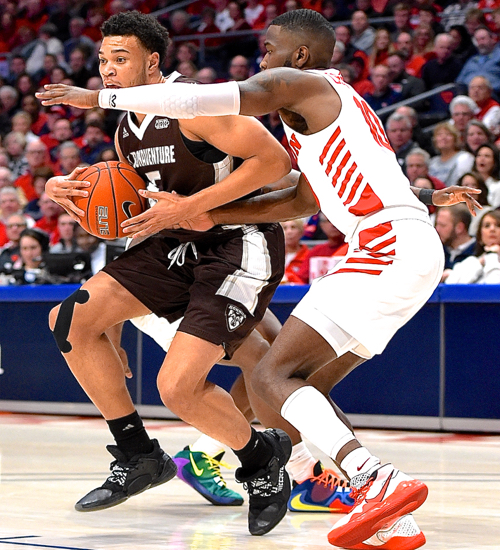 Meanwhile, St. Bona missed eight of nine first-half three-pointers and made 3 of 14 for the game. Overall they shot 41 per cent (25 for 61).

Yes, watching the Flyers play defense is fun, too.

Grant is not one to display a lot of emotion and seldom smiles while on the job. But he broke into a broad grin after Wednesday’s game when he talked about Crutcher. 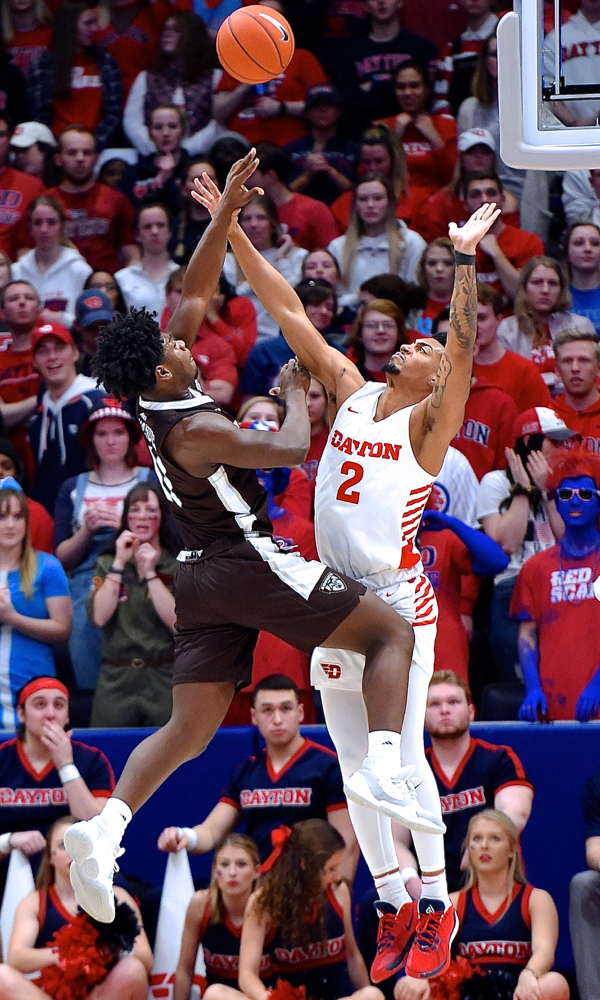 Ibi Watson contributes 12 points to the Flyers tally and attempts to block a shot of the Bonnies. 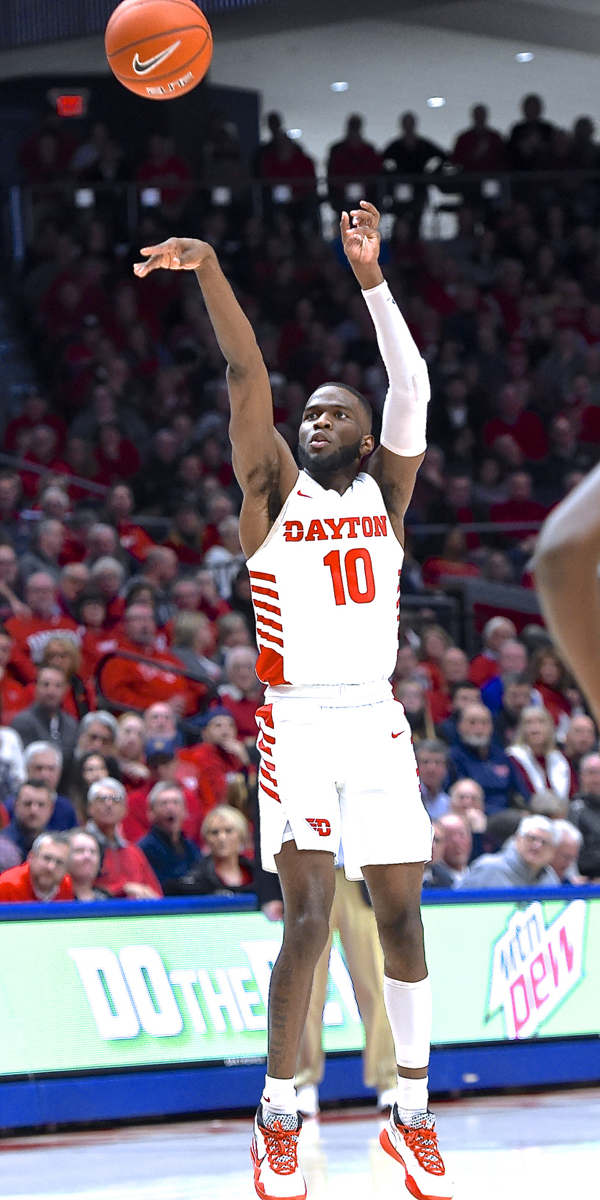 Jalen Crutcher led all scorers with 23. He made 9 of 13 shots and buried five of his nine three-point shots. (Press Pros Feature Photos By Julie McMaken Wright)