Battling a tough Butler team and boisterous student section, the Versailles boys basketball team got the last word with an impressive 53-45 victory in overtime on Tuesday night.

Vandalia, OH – The razzing started during pre-game warmups. And to be fair to the Butler High School student section – as distracting and boisterous and entertaining as any section you’ll find in the area – the Versailles High School boys basketball team didn’t look that intimidating.

Especially when looking down-court at their quicker, taller and more athletic opponents.

So when Aviator Nation chanted for the Tigers to bring out the varsity team – essentially ridiculing the Tigers for their lack of height and un-intimidating presence – Versailles senior Michael Stammen looked around at his teammates, then the Butler student section, with amusement. He cracked a smile and looked a little bewildered by Butler’s chant of “Bring out the varsity.”

Butler’s student section, though, discovered the same thing as the 14 students sections prior. Underestimate the Tigers all you want. But in the end, they’re still undefeated.

Versailles’ collection of Division III country boys from northeast Darke County can survive – and did – with an emotional 53-45 victory over Division I Butler on Tuesday night at Butler’s Student Activity Center. 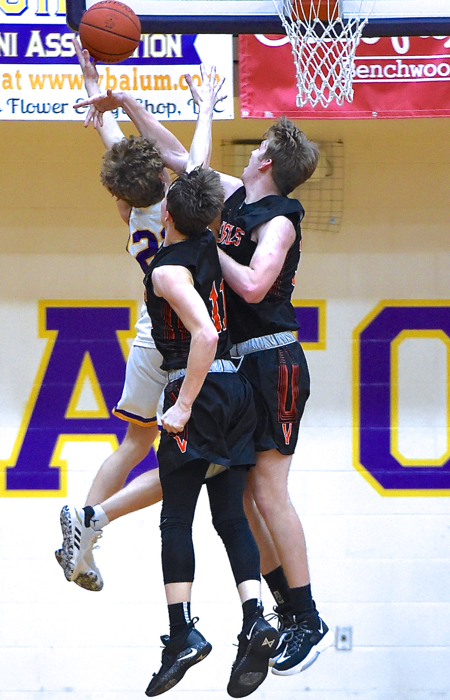 Versailles scored the first seven points in overtime on free throws, including a pair off a technical foul, and outscored Butler 12-4 in OT to win its 15th straight game. But it came with a cost. Senior co-captain Ryan Martin dropped to the court in pain after grabbing a key defensive rebound with 11 seconds left in regulation.

Martin left the SAC on crutches and with his knee heavily wrapped.

“He’s one of our brothers,” said Stammen after the game.

If the Tigers needed any additional inspiration – aside from remaining undefeated, wanting to quiet the Butler crowd or showing they can play with D-I talent – they drew it from Martin. He remained courtside after his injury to cheer on his teammates.

“Ryan is one of our team captains, along with Michael, and they do a great job leading this team,” Versailles coach Travis Swank said. “I’m proud of both of them.”

Stammen scored nine of his game-high 29 points in overtime. He also had the go-ahead basket with 2.5 seconds in the fourth quarter to give the Tigers a 41-40 lead. Butler’s Matthew Beverly forced overtime after hitting the first of two bonus free throws with 0.3 seconds left. He didn’t get a shot off before the buzzer but was fouled just outside the 3-point line franticly dribbling toward the basket.

Stammen gave Versailles the lead for good with 3:20 left in the four-minute overtime period. He was fouled while shooting, and moments later was awarded two more free throws on a Butler technical foul after an Aviators’ player had a conversation with an official. Stammen hit both.

Teammate Dakoda Naftzger added another free throw with 2:51 to play for the 46-41 lead. Two more Stammen free throws, the second with 1:06 left, pushed the lead to 48-41.

Butler’s first score came with 55 seconds left on a Cooper Justice basket. The Aviators missed three free throws in the final 35 seconds to hamstring a comeback.

Butler dropped to 7-7 overall, but had performed well of late. The Aviators had won five of their last six games entering Tuesday following a 2-5 start. 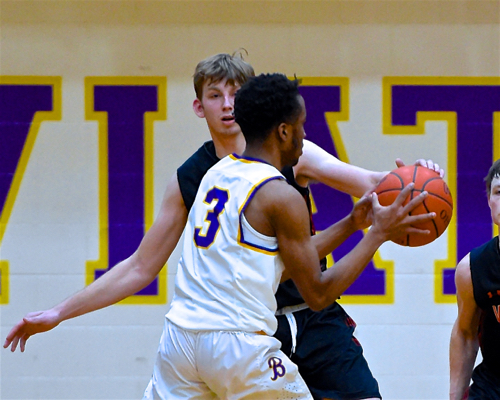 “It was fun. It was the kind of game you want as a coach,” Butler coach Adam Betten said. “Most of those guys are seniors on (Versailles). They’ve been in big games. Our guys have to step up in that occasion and I thought we stepped up for the most part. We just turned up on the wrong end tonight.”

The non-conference game allowed both teams to play without the added pressure of getting a win in the league standings. So, even with the Butler student section focusing its attention on Stammen much of the night, it gave the Tigers a chance to relax … right?

“No. Every game is a business trip, especially at a place like this,” Stammen said, grinning. “That student section was pretty rowdy at the beginning. It might have gotten in our heads a little bit but we found a way to win.”

Just like their previous 14 games. Next up for Versailles is a key Midwest Athletic Conference game on Friday at Parkway, which is tied for second in the MAC. Tuesday’s game against Butler – including Stammen’s matchup against the ultra-quick Tyler Montague that alone was worth the price of admission – will only help the Tigers.

“Yeah, it’s a lot different than playing MAC teams who are physical, but kind of slower, and who hound you when you get inside,” Stammen said. “These guys are a lot more athletic and quick. It’s nice to see before going into the tournament.”

“When you play a team like this – a ranked team that’s undefeated – those are the games kids dream about,” Betten said of the Tigers, who are ranked No. 2 in the D-III state poll. “The atmosphere. You have to step forward. The guys, I thought, brought it. I thought they played extremely hard. I thought we had opportunities. (Versailles) is a great basketball team.” 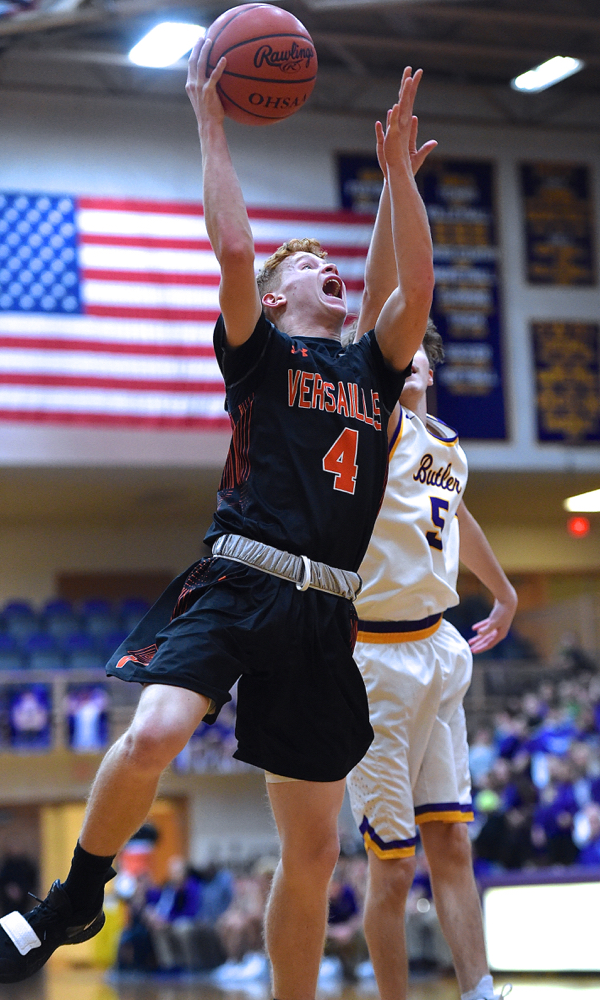 Versailles’ Eli McEldowney drives for a score ahead of Butler’s Cameron Hendricks.