End Of A Decade…And One Real Concern For The Next

With the end of another decade the cry amongst culture is heard…that the best is yet to come. But not concerning high school and amateur sports. And here’s my opinion as to why.

As 2019 closes and 2020 debuts, I’ll be bold enough to write that there’s a cloud that looms over the one thing in most communities about which we all profess to agree.

It isn’t religion, obviously.  We’ve never agreed on that.

And we’ve certainly hardened our minds and hearts over politics. Even something as basic, and irrefutable, as simple economics – balanced budgets and spending within your means – is no longer held in agreement. Debt, liking striking out in baseball, is something to be tolerated and for the good of the country – admired.

There is no consensus over ‘right’ and ‘privilege’ anymore. When I grew up if you could afford something it was a privilege.  Now it’s the right of one who cannot afford goods and services to have someone else pay to provide it.  Because of politics we live in a day when we rail against human deprivation of any kind, even if it’s a cell phone.

But the one thing that has always stood apart from religion and politics…is sports. Sports has always been that activity that’s allowed us to forget our differences and pull for each other.  And in some cases it’s made us appreciate coaches more than classroom teachers, themselves, because we can define winning in the moment by the numbers on the scoreboard. What we learn from teachers often takes years to appreciate – too long for the average individual’s patience.  And as one year, and decade, closes this week and another debuts I’m more concerned than ever that high school sports, like politics, is teetering on its own precipice of argumentative doom.

I say this out of observation – from being on the sidelines on a nightly basis. I see, and I hear. And because of this platform, I read – people’s dissatisfaction with coaches over discipline, strategy, playing time, and even statistics. It’s become an obsession in amateur sports that my kid’s experience and his rewards are more important than the accomplishment of the team.  The pursuit of scholarships has long been blamed for this, but only a minute percentage of high school athletes get any real money to play at the next level.  So the greatest threat appears to be that of just plain human intervention and what’s in it for me.  My will be done!

I observed a player taken out of an area basketball game recently, and addressed by the coach in a strong and vocal manner in front of God and everyone in the gym.  The player took a seat on the end of the bench, done for the night, and everyone knew what was going on – correction, discipline, and the obvious example of the dog wagging the tail.

That same week I was asked by a community member who was at that game if I thought the coach’s actions were excessive.

“Sure,” the person replied.

“It doesn’t happen enough,” I answered. “And I know because it happened to me once upon a time, and I know how I benefited from a coach’s discipline, and demand for execution and adherence to his rules. I well remember being taken out of a game by a high school coach who told me that it would be a long time before I saw the field again.  Imagine being told, ‘I’m sorry I even brought you on the trip,’  as Marty Karow once told me at Ohio State.

“You remember those things, that embarrassment, and if you’re smart, and competitive, you vow not to let it happen again.  It really does make you better.”

“Well I don’t think it’s right,” the person said. “I think we’re better than that now.  There’s a better way.  Someone has to be the adult in the room. There has to be consideration for dignity and pride.”

And that was the end of the discussion, but it’s not the end of the argument over the future of sports as we know it, and the benefits derived from authority, and even disappointment, that we’ve always accepted as a part of education.

Sports, and success, is hard work. It takes commitment. It takes discipline, and it takes patience on the part of community and administration that coaches and teachers (because of their own experience) know better than those who monitor constantly from the stands and hallways.

This attitude has always been with us, but in recent years it’s spread through culture like wildfire…the desire for everyone to feel like a champion. Truth be told, very few people know the feeling of being a winner legitimately, because as a retired coach from Springfield says, “Someone always bails them out. It’s always someone else’s fault.”

Coaches aren’t stupid, or naive. And their patience grows thinner with each passing year.  Administration has an ear for the community, because voters represent funding for the schools;  and administrators’ jobs are at stake, too.  So my fear is that by the end of another decade there will be fewer and fewer Tim Goodwins, Dan Hegemiers, Carla Siegels and Scott Elcherts…and younger standouts like Geron Stokes and Nick Marino.

Who would want to coach, be disrespected, and told that their experience is not relevant – that their ways don’t work, even while justified by a winning record.

Who will be patient enough to allow coaches to sell the benefits of work, failure, teamwork – do it ’til you do it right – to the next generation?

Look around and see that fewer and fewer kids are playing football, basketball and baseball each year, choosing instead to work, to pay for cell phones, cars, and Friday nights out with their friends.  Because…they don’t see the fun, or the benefits from sports.

And consider this…that sports may soon see a day when the question is not about public versus private schools, but rather by the ‘haves’ versus the ‘have nots’ – sports becoming a privilege to those willing and able to pay for the benefits of ‘true’ competition, while others question and criticize.

That person was right. I AM opinionated, and old enough now to have observed how far we’ve come since I graduated fifty years ago. We’re not necessarily better, just more sensitive and not nearly as TOUGH-minded as we once were.

That kind of adult is no longer in the room.  Or at least…not enough! 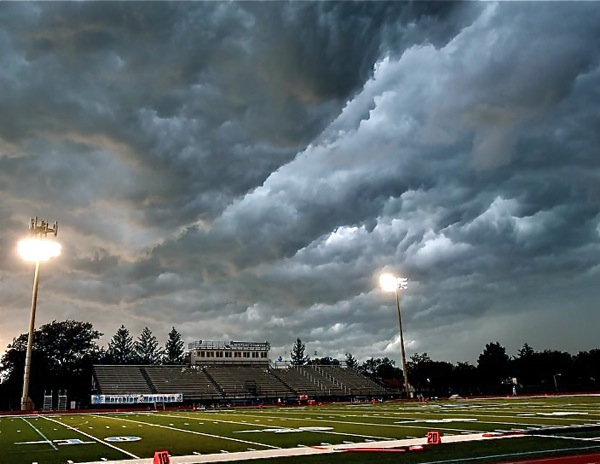 Storm over the future of sports? I say yes, because of cultural demands for kinder, gentler and the critical environment we're creating for coaches and teachers. (Press Pros File Photos)