If there’s one thing that stands out about holidays past, that one day…when my dad, my uncles, and some friends would come together to listen to the beagles and hunt rabbits.  And if you’ve ever been a small boy, there’s hardly another memory like it.

When I was a small boy Christmas was hardly what it’s become today.  It was simply a different world, smaller in the sense of family being closer together in the hills of southern Ohio – fun being that which you made – and Christmas gifts were special and anything but taken for granted.  Even an annual crate of oranges, purchased by N.D. Fulks (my grandfather) from the Huntington, West Virginia produce market, was a treasured and anticipated expenditure…and rationed, as I remember.

But of all the family memories that I cling to now, six decades removed, the holidays back then were marked by one day set aside for a rabbit hunt – fun inexpressable for the fact of being together outdoors with my dad, his brothers, perhaps a cousin or two.  And on that rare year when he could make it home in time…my Uncle Charlie always added flavor to the day, and the season.

These were times in the early 60s, in the hill country of Lawrence County (southern Ohio), where my dad and eight brothers grew up living off the land as they raised crops and milked forty head of Holsteins along the banks of Guyan Creek, just across the Ohio River from Huntington.  Dad taught elementary math in a local county school in those days, and no longer contributed to the day to day duties of the family dairy farm.  And I was a dreaming ten-year-old fascinated by everything from the Cincinnati Reds on a transistor radio, to Marshall University basketball, to the easier-to-imagine day when I’d be old enough to tote a shotgun during hunting season.  For hunting back then was a special activity for a lot of people, and there was always one day during the Christmas season when Dad and the brothers got together to chase beagles and renew the adventures of their youth.  And the best part…I got to go along.

Uncle Dan was always there for those days, because just back from the Army, young and precocious, he loved to run his pair of beagles through the winter thickets to jump and run a rabbit.  The dogs would then circle it back to a posted shooter who would try to make a quick and accurate shot.

My uncle Joe would come along most days.  A Baptist preacher in the community, he was young, personable, and a popular figure who just enjoyed a good time, regardless of how it happened…from baptizings to baseball, croquet to coon hunting, Joe was always up for anything and easily entertained.

A couple of others – Uncles Leland and Ross – often came along, more for the camaraderie of things and the stories than the hunting;  and then there was Uncle Charlie.  Charlie was special because he had left the community after a stint in the navy and moved to New York City, where he worked for years as an FBI agent.  Charlie was graced with different life experiences, having hunted big game in far away places like Maine and Vermont, and he had a unique and unmistakable speaking voice, like Clark Gable’s.  When he spoke and told stories of where he’d been and what he’d seen…you listened, or at least I did.  I was fascinated by the man, his laugh, and his vitality for life that was so different from the run-of-the-mill of my own existence. 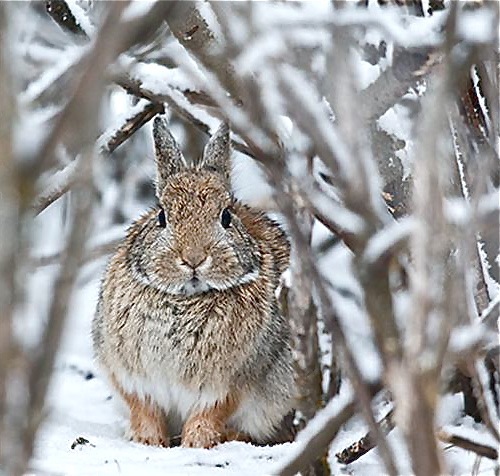 On this one Christmas eve of my tenth year, they were all there for a planned hunt on the farm of Uncle Dan’s in-laws – the Emerson White farm, on Greasy Ridge, a narrow spine of a hill that bisected Windsor Township, about five miles from the family home place.  Uncle Charlie, Uncle Dan, his brother-in-law Wayne, Uncle Joe, Dad and I spanned out across a weedy hillside pasture field as Uncle Dan’s beagles, Honey and Butch, took up the hunt.  A light skift of snow had fallen the night before and it made for easy tracking, and an added atmosphere of anticipation.

My dad was an excellent shot on running game, and I would listen for hours around the house as he’d explain how the other brothers differed in their ability with a shotgun:  Charlie always shot twice to kill a rabbit…Dan carried an auto-loader that had three shells because he liked to hear that gun go off…and Joe couldn’t shoot at all, he just pulled the trigger and laughed afterwards.  But Dad was different, in part because of his practical personality and for just being downright tight about the cost of things.  If you could kill a rabbit with the first shot you were out a dime in those days.  If it took two, or three shots…now you were out a quarter or more.  And to my dad, there were never enough quarters to waste.

It didn’t take long for the dogs to roust a cottontail out of one of the wild blackberry thickets that grew on those township hills, and true to form they ran that rabbit in a circle of a half mile or more before it came back across the line of hunters.  Uncle Charlie fired his little 20 gauge Ithaca, and missed.  Uncle Dan emptied his Remington and missed.  Joe, of course, missed.  Wayne White was too busy laughing at the others to even shoot…and of course, Dad was the last in line, with me standing behind waiting for him to shoot.  He took his time, swung ahead of the rabbit just as it neared a brushy patch of woods…and fired, cartwheeling the bunny end-over-end in a burst of snow, and into the woods.  The dogs were in quick pursuit and when we got there Butch was standing over Dad’s rabbit – a clean head kill. 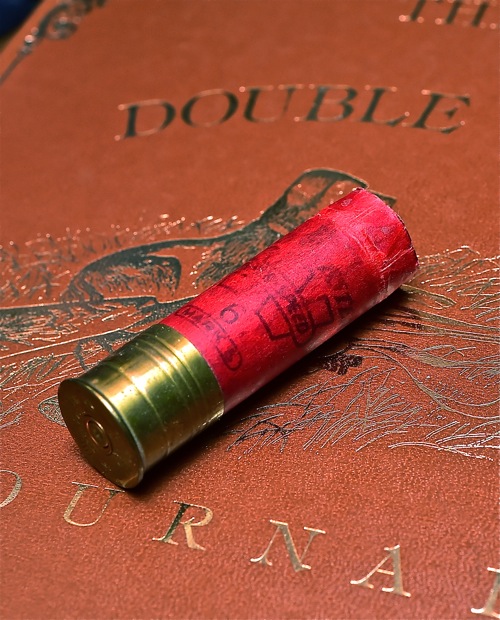 A prized possession and trophy of the past…a spent shell from Dad and the Christmas rabbit hunt.

Dad emptied the spent red shell from his old double-barrel and handed it to me, a prized possession that reeked of spent powder, that sweet ambrosia of the fall outdoors and hunting success – a trophy when you were too young to actually carry a gun.  I would stick those shells in my pocket and carry them all winter, even to school when it reconvened after New Year’s, where all the boys would swap stories of what they’d done during the holidays.

We took up the hunt again, and rabbits were aplenty.  There was lots of shooting just out of sight, down over the hill, where I heard talking and laughing.  We walked on around the hill, crossed a couple of barb-wired fences, scattered a few head of the neighbor’s cattle…and on one patch of ground, in an old abandoned orchard I stepped into a covey of wild quail.  It was a big covey, that startled me as they took off from around my feet, scattering in all directions in their flight across the hillside.  I heard shots – ten or more, it seemed – and then Uncle Charlie’s unmistakable voice claiming that he’d brought one down – a big accomplishment because quail were fast, quick and darting, and a tough target even if you’re not surprised by their flush.

Dad just smiled, and said nothing as he walked ahead about twenty paces, bent down in the broom sedge and picked up one of those Bobwhites.  Then walking another twenty steps farther and to the right, he found a second.  He had doubled, and the look on his face was priceless as he turned to show me, as if to say, “the old man still has the touch.”  He proudly flipped me the spent shells, then handed me the two birds…a hen and rooster, taking the time to explain the difference in their colors…and let me put them in the back of my coat. 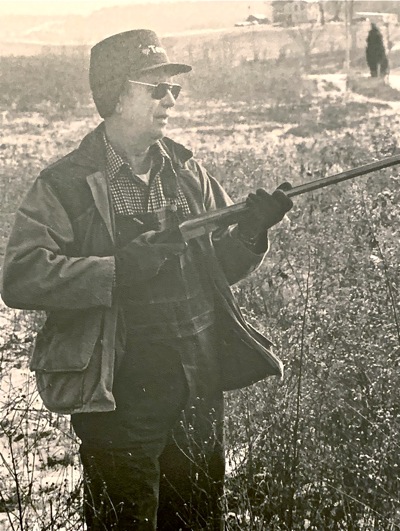 By morning’s end we had our limit of game.  Uncle Charlie had a couple, along with a new story.  Uncle Dan had his four.  Joe had found a rabbit setting in the brush and potted it for his lone kill.  I really don’t remember if Wayne shot one or not;  and Dad had a pair of rabbits and those two quail.

We all met back at the cars, traded a few handshakes and some goodbyes to our hosts, and headed back to the farm down on Guyan Creek where my grandmother had a hot lunch of bean soup and cornbread ready.  Afterwards, there was rabbit skinning and cleaning to be down, the birds were carefully plucked and dressed for Christmas dinner the following day, and Uncle Charlie, of course, knew just how to prepare baked quail.  He’d seen it done many a time on hunts up and down the East coast.

We all celebrated Christmas at Grandpa’s the next evening, with assembled family and friends who stopped by to share in the fun of food and laughter.  But all I really remember from that Christmas was the rabbit hunting, Uncle Dan and Charlie, being with my dad, and somewhere in a box of stuff deep in my closet…to this day I have the spent shell.  If you close your eyes and smell real close…it’s still all so near.

So near, in fact, that forty years later I wrote a longer version of this story for Double Gun Journal, in 1996, and presented it to Dad for another, different, holiday memory.

Happy hunting, whatever, and however ‘you’ do it now…and Merry Christmas! 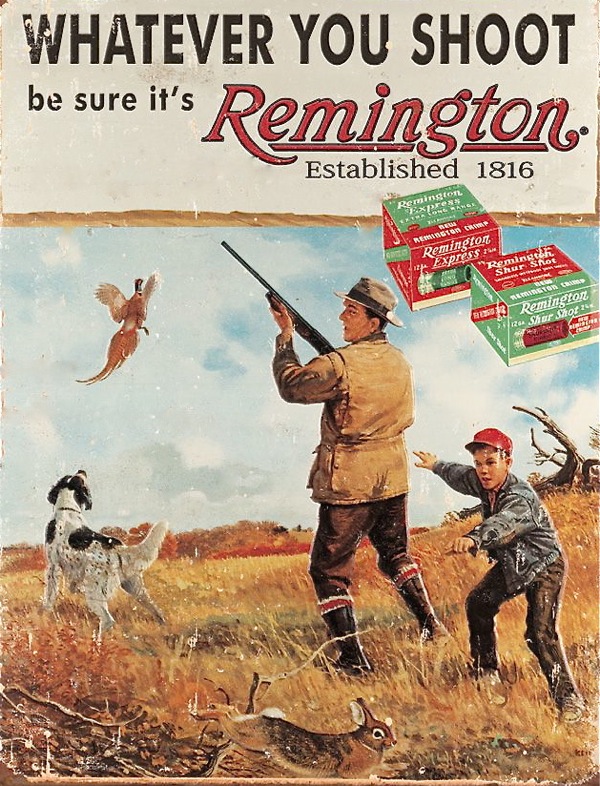 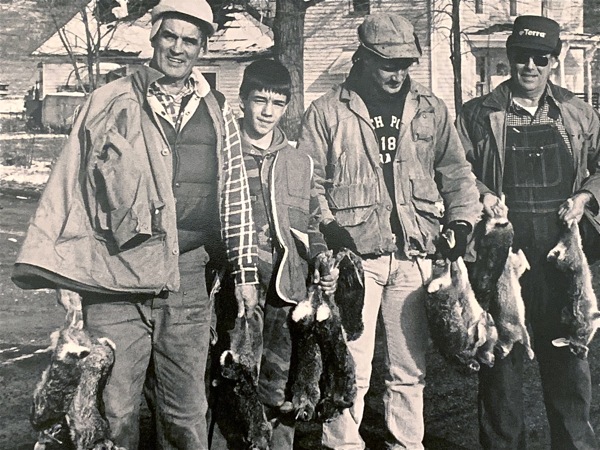 Decades old, here's a photo of what was then an annual tradition - a holiday rabbit hunt with Uncle Dan (far left) and my dad (right right). (Press Pros Feature Photos)