Yellow Jackets Win Game Of The Year (So Far)

The Sidney Yellow Jackets and Troy Trojans played even the entire night, needing overtime (thanks to a buzzer beater) to determine Sidney winner, 73-68.

By: Luke Severt For Press Pros

SIDNEY- The 2019 Sidney Yellow Jackets and Troy Trojans are both much, much different teams than they have been in the past.

Sidney lost a core of talented players to graduation last year, including superstar Andre Gordon, who became known throughout the state as being one of the best basketball players in recent memory. The Yellow Jackets won at least 17 games in each of Gordon’s four seasons, including a 20-5 finish last season.

The Trojans, on the other hand, are not a program that has become accustomed to success. Troy only won double-digit basketball games once in the previous four years, and never managed to finish above the .500 mark. 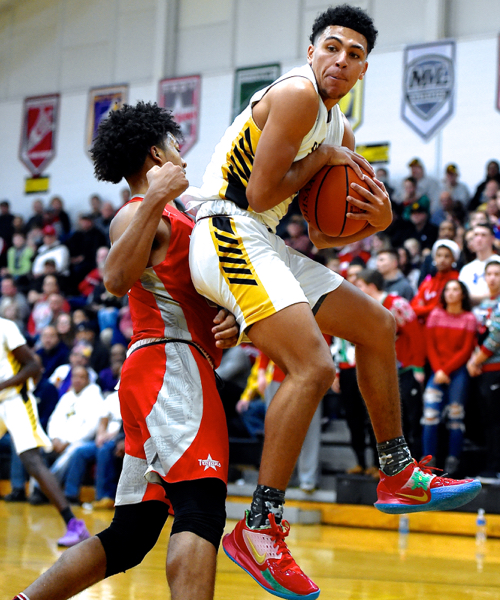 Sidney’s Darren Taborn gets both hands on this rebound before Troy’s Shaeden Olden.  Olden had 20 points for the Trojans.

However, a lot has changed, at both schools. The Yellow Jackets now have an extremely deep bench and are receiving plentiful scoring from multiple different contributors.

The Trojans have a new, fiery head coach in Mark Hess that has proven he has the ability to motivate and intensify a core group of young players who have shown their potential for years, but were never driven enough to capitalize on it.

“My focus has been on building relationships. I believe if people care about you as a coach they’ll play hard for you. So we really focus on building relationships,” Hess said. “From there I think it’s just the kids. I think the kids are really buying into it. They want to be good, they’re trusting each other, and it’s not easy all the time when your back is against the ropes in an environment like this, but they’re trusting each other.”

These two programs are nowhere near who they were a year ago. But they don’t mind. These schools are here to play, and the coaches agree that they have both proven to be very good basketball teams.

And when two very good basketball teams face off, it is bound to be interesting.When the Yellow Jackets defeated the Trojans 73-68 in overtime on their home court on Friday, it was every bit of that and more.

With each side of the gymnasium packed to capacity, the crowd was a major factor throughout the entirety of the game, according to Sidney head coach John Willoughby. It certainly made its presence felt early on. 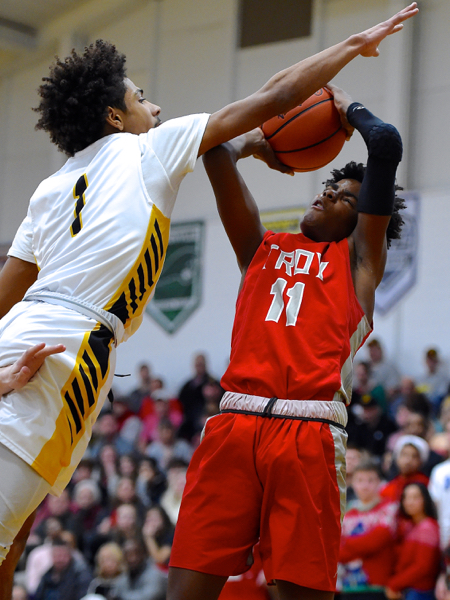 Only two minutes into the game, it was evident that it would be an intense one. Troy’s Tre Archie caused a Sidney defender to fall with a crossover before stepping back and shooting a three, while the Trojan crowd jumped to its feet for the move.

However, the shot did not fall, and after a Sidney rebound, the Yellow Jacket faithful followed suit of the Trojan crowd. Next, Archie stole it right back. Troy roar. He lost control of the ball. Sidney roar.

Eventually, Archie regained possession, and went up-and-under around two defenders to make a difficult layup look easy, and this time, the cheers were not interrupted by the opposing crowd.

This back and forth reflected the happenings on the court in the first quarter, as Troy held onto a slim 17-15 lead.

The Trojans took control of the momentum and the game in the second. They went on an 8-0 run to open the half, and at one point had their lead up to 12 points. But the Yellow Jackets came rumbling back.

As the half was winding down, Sidney was able to put together a 7-0 run that reached its climax when Archie, an emotional, intense senior guard was caught in a tie up and given a technical foul for a shove against the opposing player. 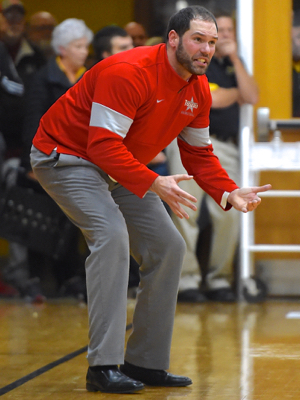 The buzzer would sound with Troy still ahead, clinging onto a 31-30 lead.

Halfway through the third, the game was tied up before Sidney went on a brief 4-0 run. The Trojans answered right back with an equalizing run of their own, and that Sidney lead was the largest margin either team managed to gain before the free throws the Yellow Jackets hit with one second left in overtime.

Similar to the mayhem of a play early in the first quarter, the basketball these two teams played was simply nothing but back-and-forth scoring. There were three-pointers, there were layups, there were steals, turnovers, blocks and and-ones, but neither team ever led by more than three.

And the Trojans found themselves down by three with 13 seconds left. Then, Shaeden Olden grabbed a rebound.

He dribbled it down the court on the left side, swung a pass to his teammate Jaden Owens, and got the ball right back en route to the top of the key. He dribbled to the right, dribbled to the left, picked up his dribble and pivoted, looking for an open shot.

So he did the only thing he could do. He jumped and shot. It was an off-balanced, awkward-looking shot with  a Sidney defender right in his face. But it banked off the top right corner of the backboard, and fell through as the buzzer sounded.

Olden fist pumped. He briefly celebrated with his teammates. He pulled off a shot that looked nearly impossible to send his team to overtime. Yet, he never smiled. He knew there was still basketball to play.

After the same back-and-forth pattern lasted throughout overtime, the Trojans found themselves in familiar territory. 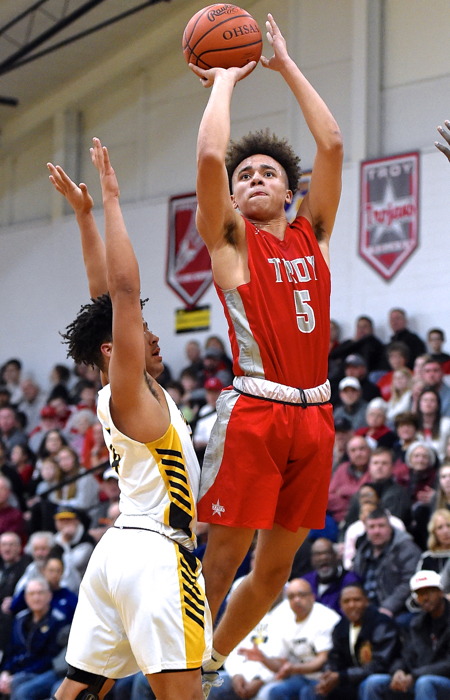 Troy’s Jaden Owens shot for 14 points for the Trojans.

They trailed by three, and Olden had the ball. This time, however, his shot just missed, bouncing off the front of the rim and into the hands of Sidney’s Devin Taborn, who was fouled and made both of his free throws to secure the win.

According to Willoughby, the difference makers for Sidney were improved rebounding and crisper passes in the second half, as well as offensive prowess from its bench, which tallied 30 points.

Leading the Yellow Jackets in scoring on the night was sophomore Devin Taborn, who had a career high 16 off the bench. Olden led Troy with 20 points.

The two teams will face off again on Feb. 4, and this time, Troy will have the home court advantage. It’s a game that both coaches are looking forward to.

“Oh yeah, I’m very excited for that,” Willoughby said, with a nod and a smile.

When asked the same question, Hess smiled as well.

“Yeah I’m excited to play these guys again,” he said. “It is going to be another great basketball game.” 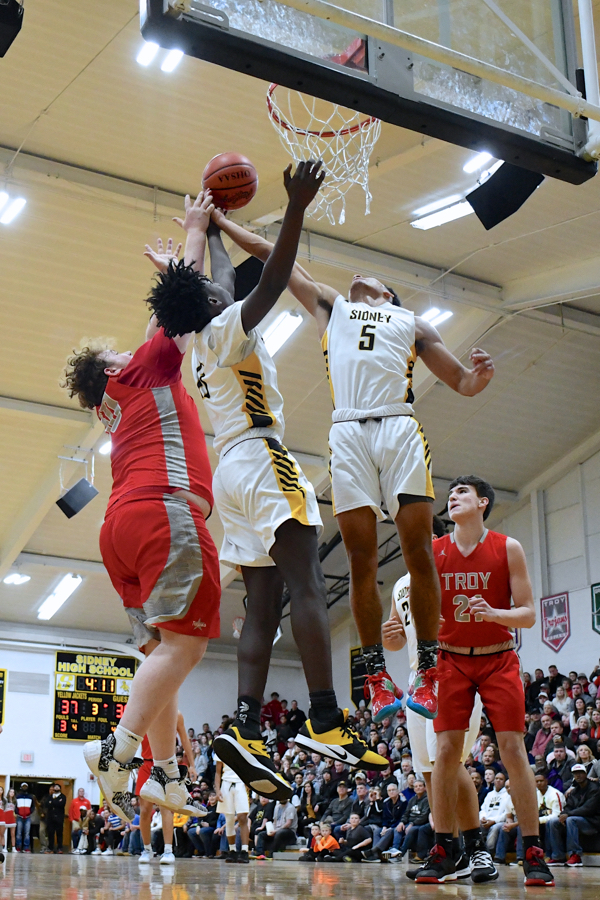 ‘The Spot’ Restaurant, in Sidney, is proud to be the presenting sponsor of the 2019 OHSAA State Football Tournament on staging.pressprosmagazine.com. 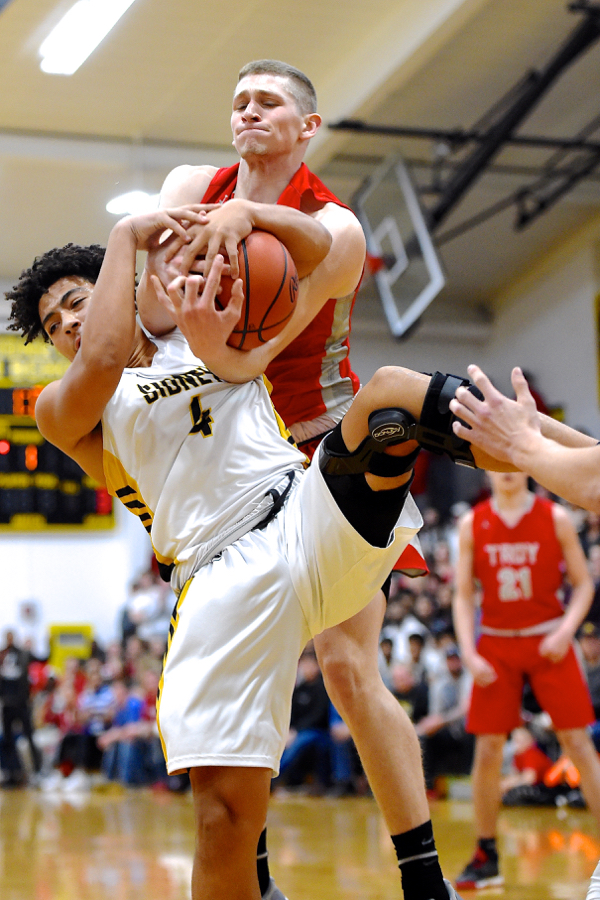