The 8-0 Fort Loramie Redskins traveled to New Bremen on Thursday, and brought its infamous full court press with it, forcing 34 turnovers and 25 steals in a big win against the Cardinals.

Then, a swarm of black jerseys burst onto the other side of the court. Two attempt to trap the New Bremen ball handler, and cause her to panic and make a poor decision with the ball. The other Redskins cover opponents in the hopes of intercepting a pass. And most of the time, they do just that.

There is a certain formula that the Fort Loramie Redskins use to play basketball. A pattern.

First, Siegel will call out the number 50 after a Fort Loramie score. Then, on the opposing team’s inbound, they’ll run the full court press. Next, at an alarming rate of success, they force a turnover, drive down the court, and score.

This recipe for success worked like a well-oiled machine on Thursday night, as the undefeated Redskins (8-0) frustrated a solid New Bremen Cardinals team (6-2) on the way to an easy 75-28 victory.

The Redskins and their full court press defense forced a whopping 34 turnovers. Twenty-four of these came in the first half, resulting in 24 points in transition. Furthermore, the Fort Loramie defense tallied 25 steals throughout the contest, a team feature that Siegel emphasizes heavily. 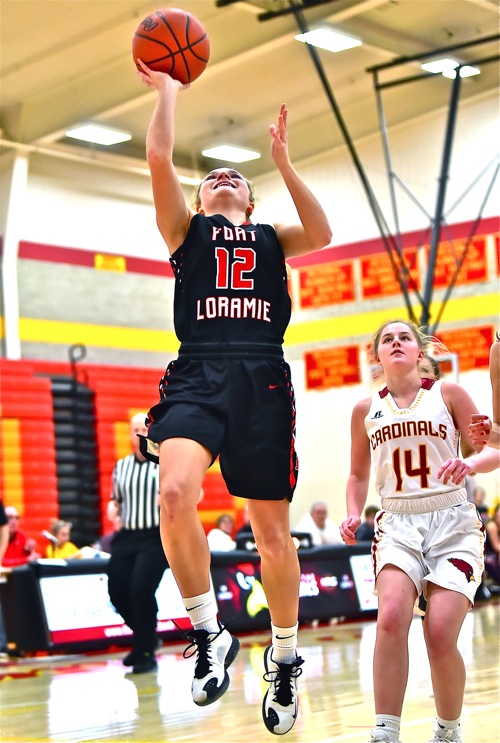 Loramie’s Kennedi Gephart scores two of her team’s 24 points in transition…in the first half.

“Well hopefully, I mean like today I think you saw it, they get scattered,” said Siegel about the opposition’s response to the press. “Then they’re making bad passes or dribbling off their foot. But we have such tall, lengthy and athletic girls that when we’re trapping they’ll see it coming and just freeze and make a bad pass. If you can have a good trap, they’re going to make a bad pass and that gives us a chance to steal it.”

It’s a well-known saying in basketball that good defense is good offense. For the Redskins on Thursday, and particularly in the first half, this colloquialism ran true.

In four quarters, Fort Loramie scored 75 points. Senior Taylor Ratermann scored 20 of these coming off the bench while shooting 6 of 8 from three point range. Two of the Redskins starters finished with 12, while each of the five had at least 6 points and the team had scoring from nine different contributors.

Siegel is mostly happy with the offense, overall. She’s pleased with the defense. She’s happy with the way her team played in the first half. But she simply cannot be satisfied with the game as a whole. In her eyes, the Redskins’ second half was nothing more than a failure to continue to perform the way they had been playing in the first.

In the second half, Fort Loramie added just 23 total points;  and was outscored 7-6 in the fourth quarter.

“We just had a nice long talk in there (the locker room) about the fourth quarter,” Siegel said post-game. “That was not us, and I’m not happy at all. For them to come out in the first half and play the way they did, which was pretty close to perfection, and then not finish well. I’m not happy with those last eight minutes at all.” 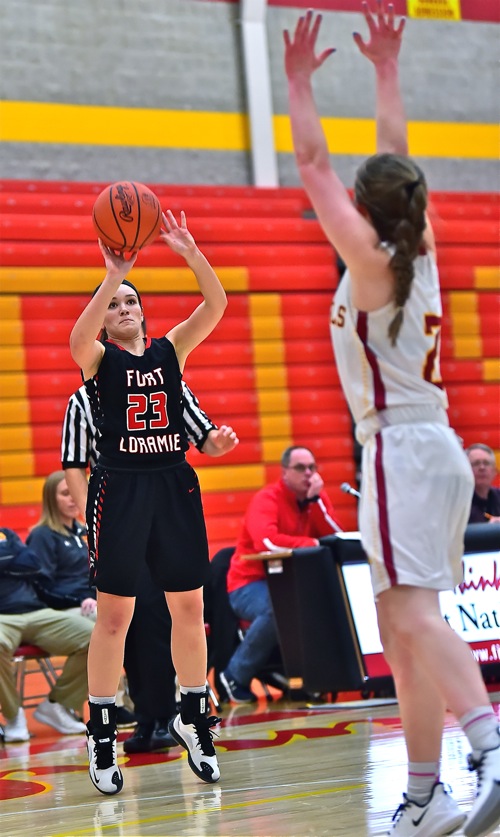 Senior Taylor Ratermann was 6 of 8 from three point range – 4 of 5 in the first half.

The Redskins did lay off the full court press due to the large lead, and Siegel was pleased with how they executed the half court defense. It was the half court offense, with passes that were not crisp and poor rebounding that caused the halt in scoring.

In comparison, Siegel could only say positive things about the first half of play.

“The first half was great,” she said. “I loved our rotations, I loved our intensity, I loved how active our hands were, I loved how the girls were communicating passing the ball. I thought we had New Bremen flustered, and that was the game plan. I think this team can really do amazing things.”

Although the first half was much more satisfying to Siegel and the Redskins than the second, was one instance in half where the Redskins executed an offensive play to perfection, and Siegel was thrilled to point it out.

Ratermann, the game’s leading scorer, was on the left side of the basket and open to go up strong with a layup and add two points to her total. However, instead she pivoted and shoveled a pass to a wide open Jadyn Putoff, who scored her third and fourth points of the game. To Siegel, this exemplifies what her team has been about this entire season.

“You won’t find that with every team.” 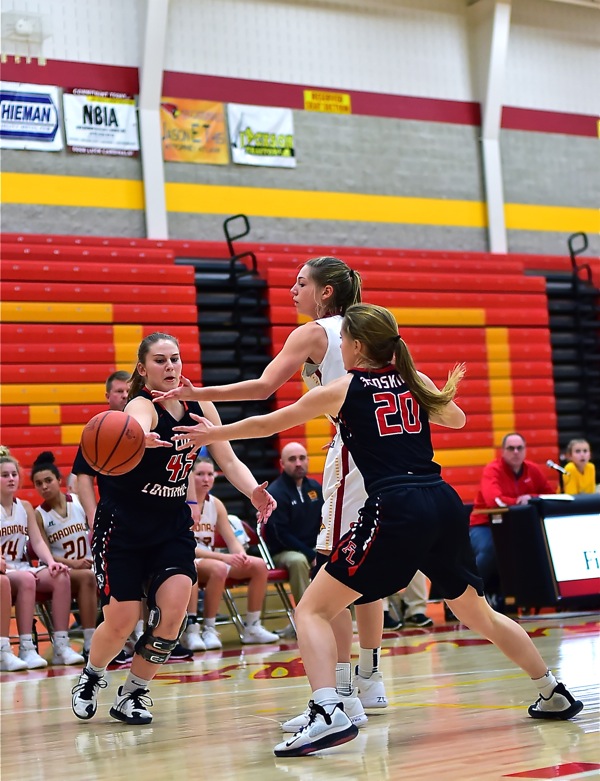 Loramie's Marissa Meiring (above, left) and Corynn Heitkamp (above, right) force one of 34 turnovers in the Redskins' Thursday win over New Bremen. (Press Pros Feature Photos)