The Kirtland Hornets made it back-to-back titles, and claimed their fifth overall, with a physical win over Ironton in the 2019 state football finals finale.

Canton, OH –  The Kirtland Hornets did what only the best of Ohio high school football teams can historically claim in Saturday night’s finale game of the 2019 state football finals – they won back-to-back titles by winning the Division V championship over Ironton, 17-7.

In a game that some billed as the best of small-school football in the south (Ironton is on the Ohio River) against the best of small-school football from the north (Kirtland is near the shores of Lake Erie), Kirtland proved their claim on their first possession of the game…hitting a long haymaker pass play to receiver Gage Sullivan to set up the Hornets on Ironton’s 27 yard line.  One play later teammate Mason Sullivan streaked the final 27 yards to make the early score 7-0, Kirtland.

Ironton was buoyed by Ohio State recruit and All-State candidate running back Reid Carrico, but Kirtland’s game plan put a spotlight on Carrico from the opening kickoff.  When Carrico touched the ball, Kirtland swarmed him.  And on kickoffs they kicked the ball away from him.  Kirtland proved to be the more physical, and quicker on the line of scrimmage, and that combination took its toll on the Tigers’ featured runner. 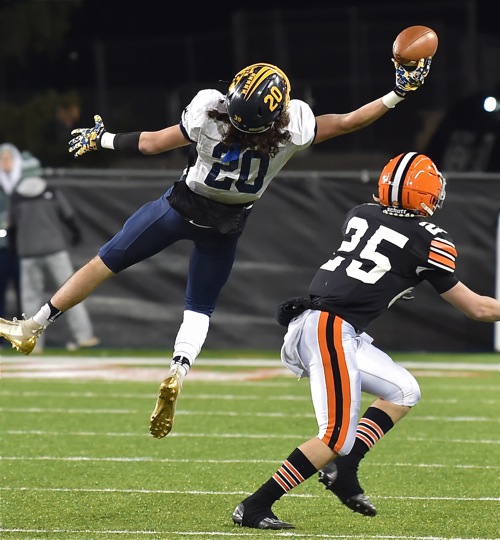 Highlight catch…Kirtland’s Gage Sullilvan makes a one-hand snag of this pass in front of Ironton’s Collin Freeman in the first half of Saturday’s D-V title game.

After Kirtland’s opening score Ironton was unable to move the ball for a second possession in a row and was forced to punt.  Kirtland immediately moved the ball inside the Ironton red zone and ultimately kicked a 21-yard field goal at the 10:24 mark of the second quarter to extend their lead, 10-0.

Ironton would finally drive the ball into Kirtland territory, but not until the closing seconds before halftime, when quarterback Gage Salyers hit teammate Jordan Grizzle with a 34-yard pass to put the Tigers on the Kirtland two yard line.  But time ran out on Ironton, who was stopped on a quarterback sneak at the one foot line as the clock expired.

The second half was much of the same, Kirtland scoring first on a 21-yard pass from Sullivan to running back Liam Powers at 4:21 of the third quarter (17-7).  And Ironton, on its ensuing possession, would finally crack the end zone with a minute left in the quarter when the Tigers hit on another long bomb from Gage Sullivan to Jordan Grizzle (77 yards) to cut the lead to 17-7.

Sheward-Fulks Insurance, in Jackson, is a proud sponsor of southern Ohio sports on Press Pros Magazine.com.

But that would conclude the scoring as Kirtland’s defense proved to be bigger, faster, and a physical match for the Tigers, making their first finals appearance since 1999.

Kirtland would finish the game with 244 total yards on offense.  Ironically, Ironton would top that with 253…77 yards of that coming on their only touchdown, and would outgain Kirtland through the air, 205 to 121.

On the ground the Hornets simply negated the impact of Reid Carrico, holding the Tigers’ junior to just 40 yards on 12 carries…and out-rushing Ironton as a team, 123 to 48. 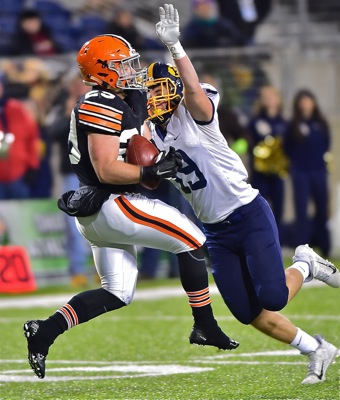 Jordan Grizzle’s catch set Ironton up on the Kirtland two yard line before the half, but the Tigers could not score as time ran out.

“Two very good, and disciplined teams,”  said Ironton coach Trevon Pendleton, afterwards.  “And they were able to convert on a couple of big pass plays and that was the difference in the game.”

“Credit to Ironton because they’re a good football team.  But I’m just proud of these guys,” Kirtland coach Tiger LaVerde said. “Fifteen-and-0, and we graduated a class of 18 seniors last year that were fantastic football players, and these guys knew it was their turn. They got after it in the weight room, and their goal was to get here.”

Kirtland finished their season with a perfect record of 15-0 and as back-to-back state champions, having taken the Division VI title a year ago by beating Marion Local in the championship game.  They were moved up a division in 2019, but it didn’t seem to matter.  The title is the Hornets’ fifth overall, having won previously in 2011, ’13, ’15, and last year.

“The Spot” Restaurant, in Sidney, is proud to be the official sponsor of the 2019 OHSAA State Football Tournament on staging.pressprosmagazine.com. 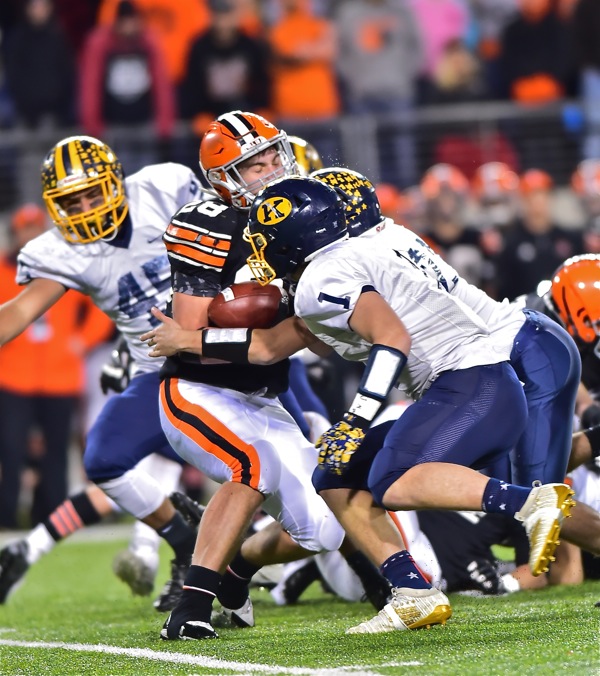