Marion Local used its big-game experience to end New Bremen’s dream season and reach the state semifinals for the 12th time in the past 13 seasons on Saturday night.

Wapakoneta, OH – There are certain things you come to expect in life.

Christmas lights going up before Thanksgiving. The ice cream machine at McDonald’s being down. And the Marion Local High School boys basketball team’s season starting late.

That last one was guaranteed to happen again Saturday night, courtesy of the Flyers’ football team. The OHSAA boys basketball season officially starts Wednesday, Nov. 27. Just not for Marion Local. The football team will be playing in the Division VII state semifinals two days later.

It’s practically a late fall custom in Maria Stein, and it’s becoming as common as moving the clocks back one hour.

Marion Local won another Division VII, Region 28 championship – this one an all-Midwest Athletic Conference battle – with a not as easy as it sounds 27-0 victory against New Bremen at Wapakoneta’s Harmon Field.

The regional title was Marion Local’s 18th in program history. Flyers’ coach Tim Goodwin knows that streak has to end at some point.

“Not this year,” Goodwin said with a smile. “We’ve got great kids that work hard and are willing to do what we ask them to do. We have a great coaching staff and everyone knows what to expect. We have a chance.” 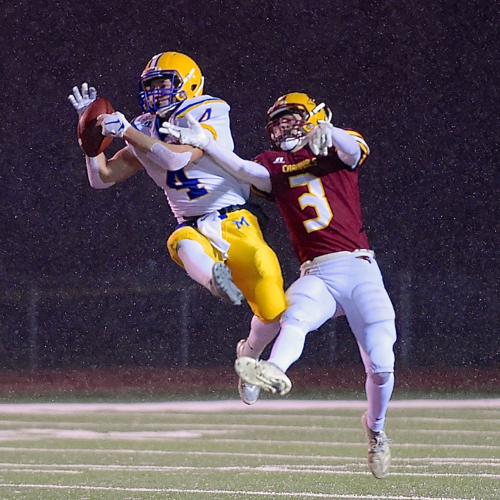 Eighth-seeded New Bremen (9-4) did too … until No. 2 Marion (11-2) opened the third quarter with senior quarterback Kyle Muhlenkamp’s 20-yard sprint to the end zone for a 14-0 lead. The Cardinals, making their third postseason appearance in program history, played like they belonged in the regional final. And they did belong, being one of eight teams in the playoffs – in all seven divisions – to upset a top-seeded team in the first round.

The Cardinals played with the Flyers in the first half, holding Marion to seven points in the first half. Marion scored on its first drive, which was aided by Goodwin’s gusty call to go for it on fourth-and-1 on the Flyers’ own 43-yard line. Senior Dylan Heitkamp picked up eight yards to … as Flyer Nation shouted after every first down … “move those chains!”

“That’s the way we’ve always been,” Goodwin said. We don’t like to punt on short yardage. If you can’t get the first down, then yeah they deserve to get the ball there.”

Three plays later, Muhlenkamp found junior receiver Charles Huelsman for a 48-yard scoring strike. Huelsman went high to snag the pass – to the surprise of a Cardinals defensive back sitting behind Huelsman anticipating an interception – and raced to the early 7-0 lead with 6:40 left in the first quarter.

As for New Bremen, its two biggest scoring opportunities came … and went … with a missed 33-yard field goal and Huelsman’s interception on the Flyers’ 15-yard line. 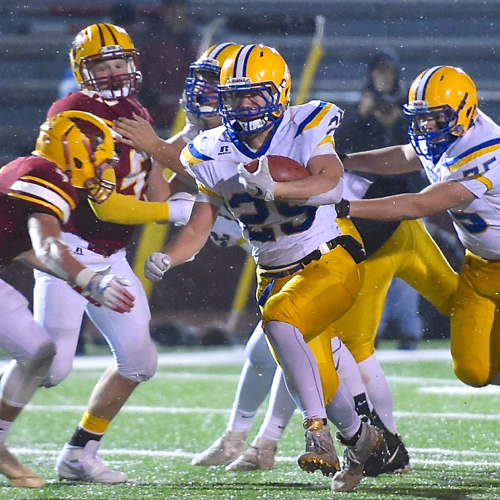 Brandon Fleck led all rushers with 74 yards on 14 attempts.

“(New Bremen) had a great season, probably one of the best they’ve ever had,” Marion senior offensive lineman and defensive end Matt Everman said. “That’s a credit to them. Our coaches have been in this situation before so they know how to get a team ready. We’ve gone (to the state finals) since we were freshmen so I think that definitely helps, too, just being there.”

That big game experience came through in the second half. The Flyers used a 10-play, 68-yard drive for the 14-0 lead with 7:31 left in the third quarter.

Marion nearly tacked on another quick score. But sophomore Peyton Otte’s 56-yard punt return touchdown was wiped out by a block in the back. The drive ended five plays later on a lost fumble.

“New Bremen came out and played very well, very physical. They controlled the whole first half in terms of clock,” Goodwin said. “We were pretty frustrated offensively, but that happens. The kids kept playing hard and kept their wits about them.”

Marion blocked a punt that freshman Drew Seitz recovered on New Bremen’s next possession. The Flyers capitalized one play later when Muhlenkamp hit Otte wide open in the end zone for the 33-yard score. The Flyers led 21-0 with 1:22 left in the third quarter.

“I saw and I said don’t mess this up,” Muhlenkamp said of the throw to Otte, who didn’t have a defender within seven yards of him. “He ran a great route, the line protected and it was wide open.” 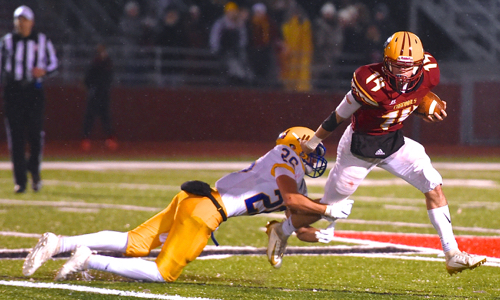 Quarterback Mitchell Hays (14) led the Cardinals to one of their best seasons in program history.

Seitz ended New Bremen’s next drive with an interception at midfield, returning it to the Cardinals’ 26-yard line. Six plays later – and after junior lineman Braden Topp kept the drive alive by recovering a fumble – Heitkamp took a pitch three yards for the 27-0 lead.

The victory sends Marion Local to the state semifinals for the 12th time in the past 13 seasons. The Flyers have also reached eight straight state championship games, winning six of them.

Since Marion’s last regional tournament loss to Minster (30-26, regional semifinals) in 2010, the Flyers have gone 38-2 in the postseason.

The Flyers graduated 18 seniors from last year’s state runner-up team. And though Marion is in contention for another title with talent, this year’s team lacks the standout playmakers other Flyers’ teams enjoyed. 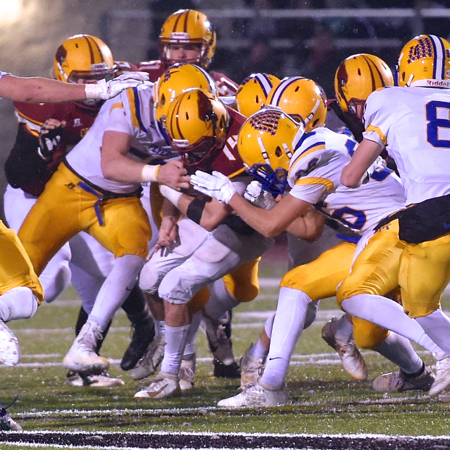 “We’re just resilient,” added Muhlenkamp, who completed 4-of-8 passes for 109 yards. “We don’t give up, last week for example. We put our heads down and work. Maybe the talent’s not there from previous years but we’re ready to work and get after it.

“I think around here (playoff success) is kind of expected. Coaches kind of push us. Seeing previous years do it we kind of set that expectation for ourselves.”

The key to the 2019 Flyers is defense, with a dose of offense mixed in. On Saturday the Flyers’ defense held New Bremen (unofficially) to 76 yards rushing on 41 carries. Cardinals junior quarterback Mitchell Hays completed 8-of-15 passes for 76 yards.

“They played really well. They took a huge step forward this year,” Goodwin said of the Cardinals. “First of all, they beat the teams they should beat. That’s one of the first things you have to do. They came out and competed really well with us tonight.”

Marion Local rushed for 130 yards on 32 carries. Fleck led all rushers with 74 yards on 14 attempts.

“I think it’s the fact we never give up,” Everman said of grinding out the win. “Coaches always say next play, next play. You have to have faith. Especially this team – at the beginning of the year we had a bunch of new guys — we never give up and we play our hardest.”

Next up for Marion is No. 3-seed and 10-3 Hamler Patrick Henry, a 27-13 winner over No. 1 Leipsic in the Region 26 championship. The teams play in the state semifinals next Saturday at a neutral site to be announced on Sunday.

For Marion it’s a chance to add to their all-division state record for playoff victories – currently at 79. Goodwin has all but one of them (Ken Meyer).

And postpone that basketball season another week. 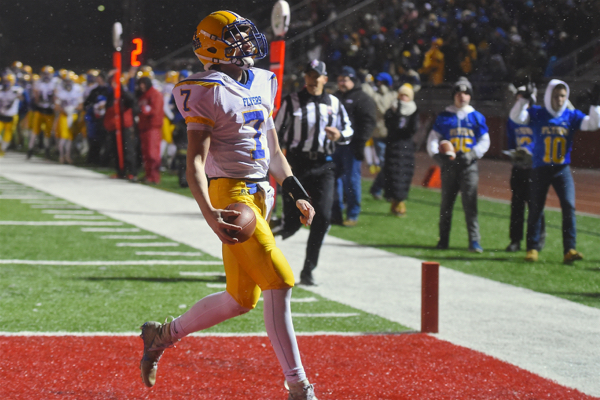 Marion quarterback Kyle Muhlenkamp gave the Flyers a 14-0 lead on his 20-yard run. 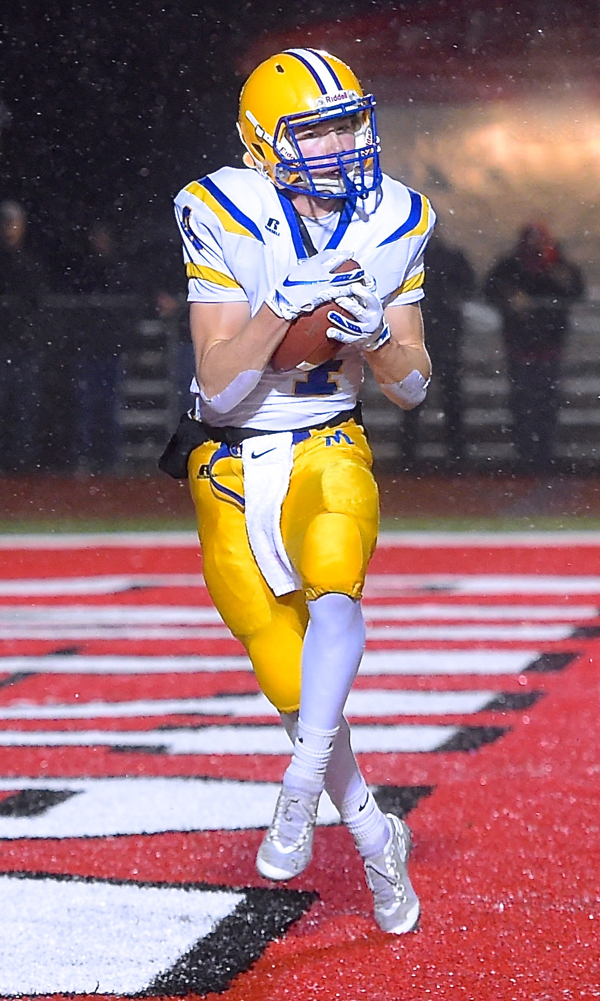