Music Trivia, 101: What Song Has Made The Most Money For The Most People…?

You rarely hear it anymore because of the decline of music radio.  But of all the hit songs ever recorded, this one stands out for being a hit for no fewer than 70 different artists…and making money for every one of them.  But none more than Tom Jones.

When song writer Curly Putnam wrote Green, Green, Grass of Home in 1964 he thought it was a good song, but he wondered if he would ever find a home (or an artist) for it.

Too sad, others excused.

Not quite pop, and not quite country, most agreed.  It’s going to take the right personality, the right voice, to make it work.

Putnam finally found a taker in country legend Porter Wagoner, who recorded Green, Green Grass of Home in the summer of 1965.  Wagoner did well with the tune, given his weekly TV show, and his already established career built on sad ballads and songs with hard luck country themes.  Wagoner’s version created enough attention that Jerry Lee Lewis took at crack at it that same year on an album entitled, Country Songs for City Folks, but later complained that the song’s story and lyrics needed too much complementary support, voice and background. 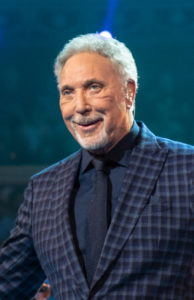 At that same time a Welshman named Tom Jones was making his American debut, and sang it on the Ed Sullivan Show in November.  Jones liked it, and his powerful baritone voice seemed to provide what Wagoner and Lewis lacked.  He took the tune back with him to England, and in the spring of 1966 recorded his own version.  Within six weeks Tom Jones had his first (and signature) #1 hit, and a hit that would soon be followed by about 30 more by Jones over the next two decades.

Jones’ success led to an unprecedented number of following covers by artists that decided what was good for Jones and his soaring popularity would be good for them, too.  Everyone, it seemed, had a version of Green, Green Grass of Home, a lyric about a condemned man on death row that dreamed of going home free of his fate…only to awake from a dream and face the reality of a prison guard and a clergyman waiting to accompany him to his execution.  Those who would record it included:  Charlie Pride, The Statler Brothers, Dean Martin, George Jones, Joan Baez, Trini Lopez, Andy Williams, Elvis…and even The Grateful Dead.  In all, more than 70 different artists and groups gave it a shot.

But none were as popular as Tom Jones, who sold a million records in the UK in the span of three months, and then followed that popularity with another million in the US once he came to America to be a regular in Las Vegas.  He has always included it in his show repertoire, along with It’s Not Unusual, What’s New Pussycat, Delilah, Help Yourself, and about twenty others…Green, Green Grass of Home often being his encore selection.

The embedded recording here was done on New Year’s Eve in 2009 by a much older, and different looking Jones, but still with that powerful voice and the personality that made this song what it would become back then…and still is to those who make it his #1 requested hit.  And where most artists’ live performance of a hit wanes with time, Jones’, it seems, just keeps getting better.  Enjoy.

And now you know….