Showtime: UD Tunes Up For Maui With Win Over Omaha

They shot 55% and played their most complete game of the year, albeit in just three games.  UD tuned up for bigger things ahead Tuesday with an impressive win at the Arena over Nebraska-Omaha.

Dayton, OH – Dress rehearsals are over. No more Cedarville. No more Charleston Southern. And no more Nebraska-Omaha, the UD Flyers’ latest and last tune-up Tuesday night at the Arena, as the Flyers completed the tricycle stage of their 2019-20 schedule with a 93-68 win.

It’ll get a little tougher now, with the Flyers leaving later this week for the Maui Classic, in Hawaii, and some two-wheel games against the likes of Georgia, Michigan State, and whatever comes out of preliminary games between BYU, Chaminade, Kansas, and UCLA.

But first, Nebraska-Omaha, the Mavericks, who made a favorable first impression, coming out confidently, hitting 4 or their first 6 shots, and looking every bit like a team that ranked with the best shooting teams in the country last year.

They slashed to the rim, opening up space on the perimeter where leading scorer J.T. Gibson (15.8 ppg) made the most of those opportunities.

But tied at 10-10 at the 12-minute mark Dayton’s Obi Toppin stole the ball on the Omaha baseline and streaked 90 feet to score on a lay-in that gave the Flyers the lead and momentum. From that point the Flyers went on 15-2 run, Rodney Chatman hit a couple of threes, and it was, “Honey, are we packed for Maui?”

Omaha would not score again for another 5:30, while the Flyers extended their lead to 31-13 with Toppin (of all people) stepping out at the top of the foul line and draining a three. Trey Landers dropped one from behind the arc, a steal here by Ryan Mikesell, and dunk there by Ibi Watson and the Flyers went to the halftime locker room with a comfortable 43-24 lead on 55% shooting from the floor…and 37.5% from three-point range. 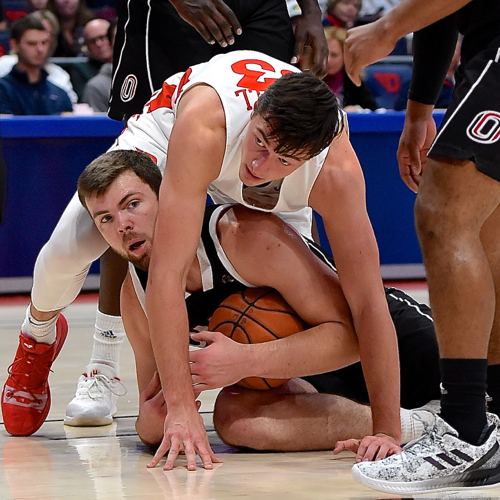 “We set the tone tonight, the effort we played with,” said Anthony Grant. “That was nice to see. Hopefully things are coming together for our guys. I think we’re beginning to understand. I think we know what we’re capable of.”

Grant took off his jacket for the start of the second half, a symbol perhaps of taking things more seriously. It worked, the Flyers scoring on their first four possessions, accented by Chatman’s third three-pointer of the game. Another  bomb, Ryan Mikesell’s three at the 17:00 mark built the Flyer lead to 53-29.

UD shot 70% for the first five minutes to start the half, and quickly established that as the postscript for the game. For his part, Omaha’s J.T. Gibson found his stroke, canning a couple of jumpers during that span to even keep the Mavericks within sight. Gibson, a 6’3” fifth-year senior from Minneapolis, is a pure scorer, averaging 35 minutes of floor time per game, and by night’s end had eclipsed his per-game average, with 21.

Omaha tried to push the pace, and the Flyers responded, Toppin, Watson, and Mikesell creeping into double digits.

“Big point of the game,” said Grant. “We feared their three-point shooting and they were in the top ten in the country last year shooting the three. You saw in that five minute span what they were capable of doing. But thankfully, our guys met that challenge.”

Try as Gibson and teammate K.J. Robinson might to keep the Mavericks close, Dayton’s dominance on the offensive boards in the second half kept the Flyers out of harm’s way – that and a THUNDEROUS dunk by Toppin at 5:02 from a Jalen Crutcher assist. Toppin’s had some good ones in the past two seasons, but this one really had some mustard on it. 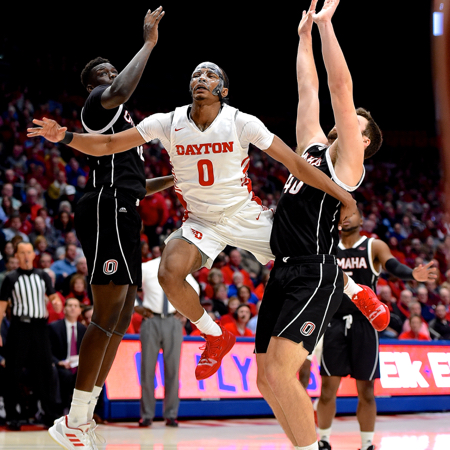 Rodney Chatman splits a pair of Omaha defenders on the way to a double digit night.

“It was just another dunk,” said the New York sophomore, afterwards. His words said one thing, his smile said another. “Jalen threw me a really good pass, that’s what he does, and he put it right where I needed. It hyped our team a little, but our defense helped with that because without it I wouldn’t have gotten that lob.”

The crowd began filing out with three minutes left, at 81-60, a concession to the outcome and anticipation of better things to come from the best Flyer lineup – talent and depth – in Anthony Grant’s three seasons.

“Any time you can have five guys in double figures, and two games in a row with 20 or more assists you’re going to take it,” said Grant. “It’s only three games, it’s still early in the year. But still, the effort we got tonight was good. This was a good team, a really physical team, and again they’re a good shooting team. We gave them a couple of threes in the second half, but a lot of the ones they made were contested.”

To the manner in which they moved the basketball….

“Our guys played with some joy tonight,” added Grant. “The way the ball moved, the extra passes, they were excited to get guys open, irregardless of whether the ball went in. That didn’t matter. The ball moved, they got great shots, and it was great to see.” 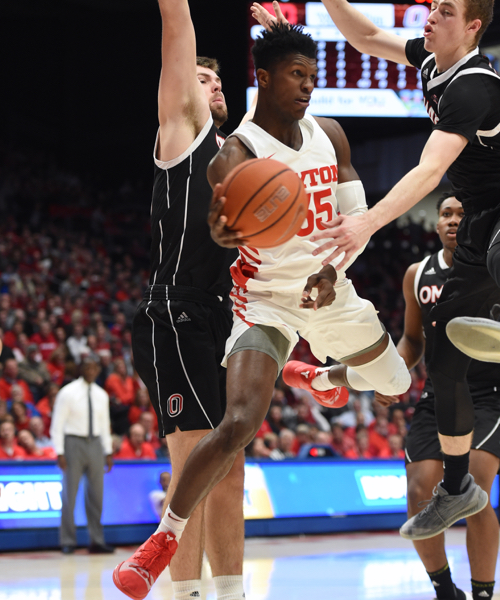 Dwayne Cohill looks for one of the Flyers’ 21 assists.

Some numbers: Five players finished in double figures, led by Obi Toppin’s 21 (and three blocks), Ryan Mikesell finished with 16, Rodney Chatman had 13, Trey Landers had 11, and Ibi Watson had 11. The Flyers finished with 54.8% shooting from the floor and 38% from three point range.

For Omaha, J.T. Gibson led the Mavericks with his 21, while KJ Robinson seconded that with 13, and three for five shooting from behind the arc in the second half. Omaha finished with 42% from the floor, and impressively, the Flyers held them to just 22% from behind the arc.

The team of so much early-season anticipation, even after just three games, made a highly favorable impression on Omaha coach Derrin Hansen.

“I’m a fan,” said Hansen. “They have a lot of pieces. They guard well, they shot it well tonight with the threes, and when you have Toppin in the middle you have to give so much attention to him. He opens up everything else. They made the extra play tonight, and then cashed in with their shooting.

“They are by far the best team we’ve seen so far (counting Wichita State and Colorado State), and second only to Arizona I expect them to be the best team we see all year.”

But now the big guys come, three games in three days in the Pacific, something that Grant is anxious to see.

“I don’t think our team lacks for confidence, so bottom line we’ve got to go out there with the same approach we had tonight. We need to understand how we can accomplish what we want to accomplish. Tonight was a great challenge, but the next challenge will be in Maui.

“Every game now is going to be a challenge,” he added. “It doesn’t matter what it says on the front of the jersey because in today’s game everyone has good players. But we were able to do the things we needed to do, and that’s what we’ll need when we see those teams [Georgia, Michigan State, and one to be named later).”

The curtain rises. And let the games begin! 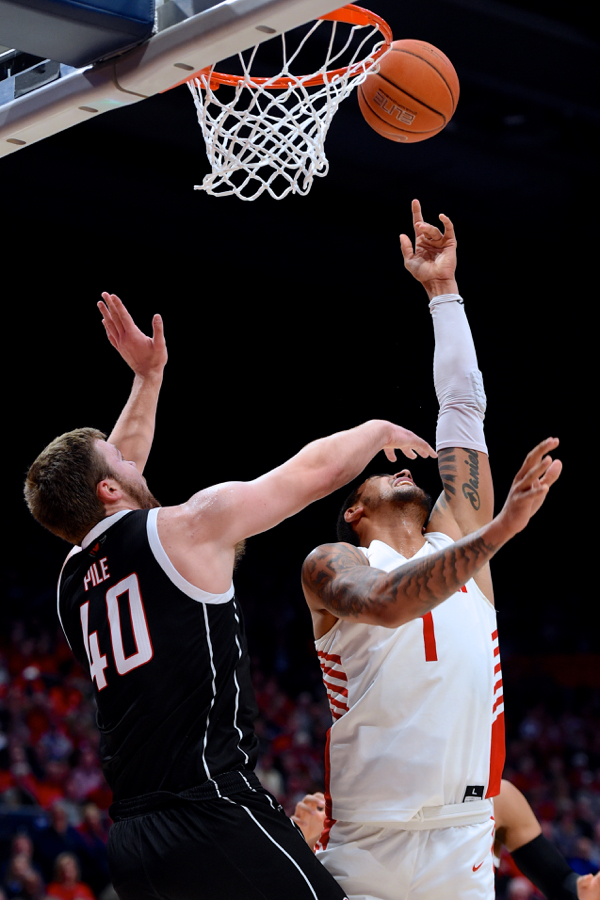 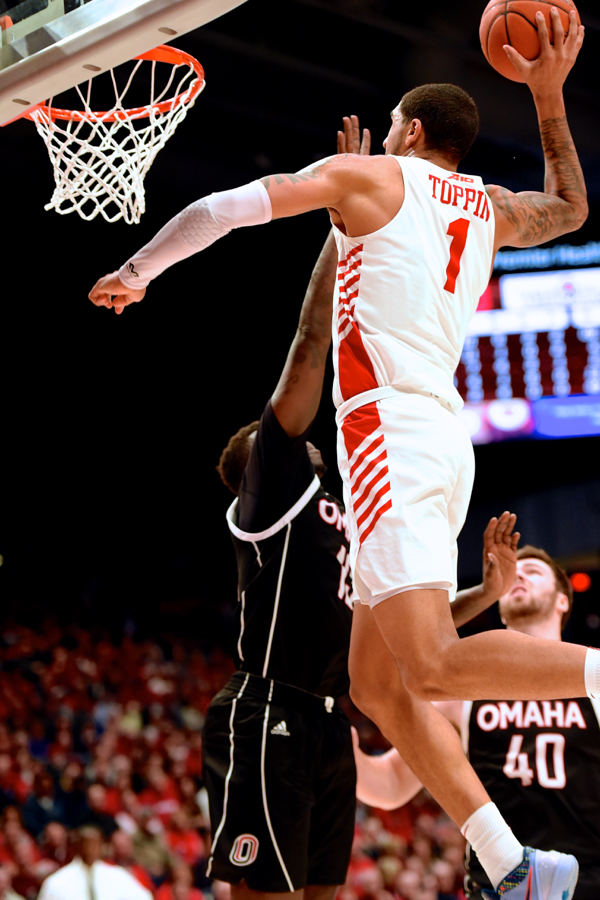 Obi Toppin provided this offensive highlight in the second half, and finished with 21 points - one of five Flyers in double figures. (Press Pros Feature Photos By Julie McMaken Wright)