To some it might be hard to fully appreciate it – Anna football.  Even after Friday’s impressive regional win over Sherwood Fairview you can miss the essence of it, unless….

Unless you remember their fledgling days as members of the Cross County Conference.  The days when they had more and bigger players than the rest of the league, only to struggle against Covington and Arcanum.  The days when they were characterized by reverses on kickoffs, and twelve men in the huddle on the sideline – a sidebar story of a Shelby County League team playing football.  The days when then coach Brian Rioch tried to beat you with ‘trick plays’, a rival CCC coach would claim.

“They had all those guys and those big linemen and they would run the Statue of Liberty play,”  laughs former Covington coach Ted Peacock.  “I used to get p—-d because they ran those trick plays.  But you have to give Brian credit.  It’s not easy to start a football program, and people forget that while they were in our league they made the playoffs every year.”

But no more tricks as they play this weekend for a Division VI regional title.  Thirteen years after leaving the Cross County Conference for the MAC in 2006, the Rockets, now under Nick Marino, are no longer a sidebar story.  The only question you hear now is…how far can the Rockets go?

Anna is one of two Shelby County Conference schools to play football, with both have rising coaching stars in Marino, and Loramie’s Spencer Wells – Marino from Urbana, and Wells a graduate of Delphos St. John and a former assistant with Tim Goodwin at Marion Local.

Both are pushing the envelope away from their school’s identity as a basketball school, while both schools are good on the hardwood – consistent threats for sectional, district and regional attention.  But football clearly commands the conversation now with the mention of Anna and Fort Loramie.

Where Anna is concerned Bart Bixler, Riley Huelskamp, and an offensive line that could go toe-to-toe with Piqua and Sidney have seen to that.  “They’ve achieved a different status,”  said an observer at Friday night’s regional semi-final with Sherwood Fairview.  “They’ve become Marion-ized.  They can play power football.  It’s taken them a few years, but they’re a MAC football team now.”

They’ve always had football talent, and for at least half of their thirteen years as a MAC member people have predicted that they would impact the pecking order, with Marion Local, Coldwater, and Minster.

But always something – the inexplicable loss, or the end-of-the-season swoon.  And again this year, favored to win against a rebuilding Marion in Week 5, the Flyers surprised no one with 17-14 win.  The pre-season favorites to win the MAC title outright, the Rockets, for a second year in a row, settled for a share (with Marion and Minster).

“It’s not that easy,”  said Nick Marino in a July Press Pros column.  “People say things before you ever run a play, win a game, or even scrimmage.  You have to learn who you are.  You have to have leaders.  You can talk about returning starters, but every year boils down to the leadership on your team.  You have to fill that role to be successful.”

“You can talk about Riley Huelskamp,” says Anna coach Nick Marino.  “But our best player last year was probably Isaac Dodds.  He was our center and our best leader.”

Marion-ized?  You can point to the best of Marion teams under Tim Goodwin.  You can reel off names of quarterbacks (Adam Bertke), running backs (Jacy Goettemoeller), and receivers (Hunter Wilker).  Anna can now counter with Bixler and Huelskamp.  But the essence of those ten Marion state titles – those Coldwater teams that won four in a row – is power football. Can you run between the tackles?  And when Nick Marino talked in July, he was quick to draw that corollary.

“You can talk about Riley Huelskamp,”  said Marino.  “But our best player last year was probably a lineman, Isaac Dodds.  He was our center and our best leader.”

And when you talked with Huelskamp after Friday’s win over Sherwood Fairview, the first words out of his mouth were those of tribute for this year’s offensive line.

“Those guys…I owe everything to them tonight.  They absolutely dominated.”

And indeed, if you look at the photos…everywhere you see Riley Huelskamp busting through the line you see an escort from the likes of Grant Albers and Anthony Billing – power football in the best of MAC tradition.

“It’s a tough league, with tough players and great coaches,”  says Marino.  “You can look at three or four plays in every game.  You make those plays and you have a chance to win, so you have to make those plays consistently, and it starts with the offensive line.”

He isn’t kidding.  We actually picked Minster to win their opening playoff game last week because of their offensive line.  But Anna trumped it with the likes of Evan Poeppelman, Albers, Billing, and Wil Luthman.  They were as big as the moment, in the tradition of Marion, St. Henry, Versailles, and Delphos St. John, eventually pushing the Rockets to a comfortable first-round win.

“We lost two of our best players last year to graduation – Brayden Farley and Isaac Dodds,”  said Marino, sober as a judge as to their significance.  He’s learned how to play MAC football.

Thanks to the sum of the parts they’re no longer a novelty from a basketball league, or a footnote built on a couple of plays you see once or twice a year.  Anna has taken its place now with a different, but familiar football identity, thanks to an association.  You’re known by the company you keep. 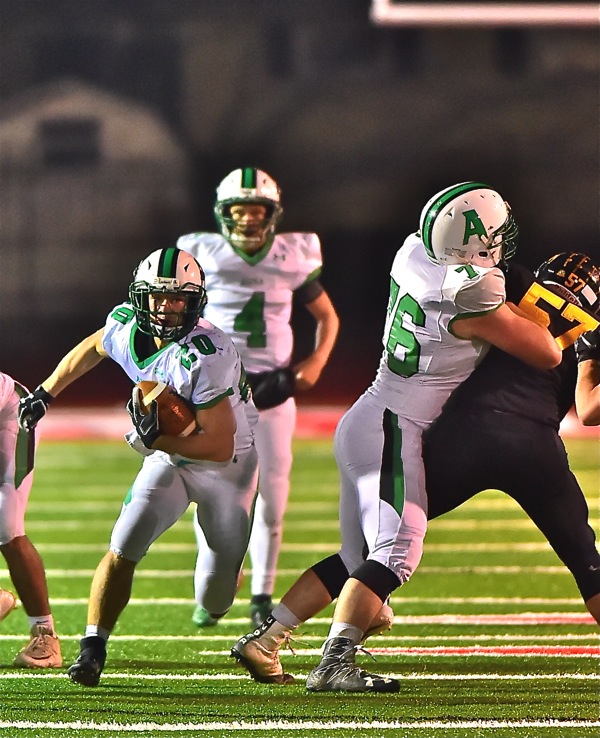