Trojans Fall To Olentangy…Tradition To Be Continued

After a quick start, Olentangy unleashed its offense to score 42 unanswered points, ending Troy’s season and crushing the Trojans’ playoff ambitions for another year.

By David Barger for Press Pros

Troy – Troy Memorial Stadium truly is a memorial. It’s one of Ohio’s classic venues for high school football contests and it ranks among the top sites for OHSAA playoff host sites.

The stadium complex and its facilities are all wonderfully maintained, a testament to the love and passion that the community has for football. And for the Troy community, there was no place they would rather spend a freezing cold, fall Friday night, especially during the opening round of the 2019 Playoffs. Although the season would not continue after tonight, it was also obvious that once again the Troy tradition of successful football has and will continue.

For Dan Gress, in his first year, even though expectations in Troy are always high, some initial uncertainty was present. Reflecting on this season’s initial outlook Gress stated, “For us as a coaching staff we took it personal, knowing the work our seniors had already put in, when rumors went around that this was a year that Troy takes a step back.”

However, 2019 Trojan football turned out to be a continuation of the success from the previous three years. Although in a new conference by name, Troy still dominated familiar foes and brought home its fourth consecutive league title, followed by their fourth consecutive year in the playoffs. This accomplishment was a first in school’s history. 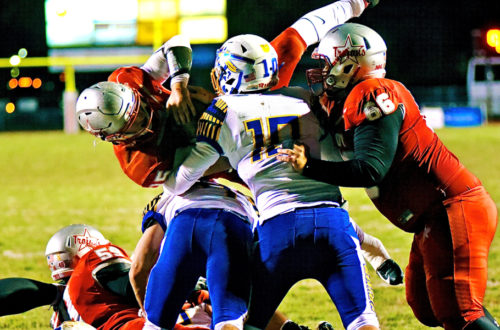 After a fast start Olentangy’s physical defense shut down the Trojan running game.

Troy would finish their season 8-3 after tonight’s 42-10 loss to the Olentangy Braves. Yet, this would be an unexpected outcome for anyone watching the first two minutes of the contest.

The Trojans took first possession, and immediately scored on a 1-play drive thanks to a 73-yard TD run by senior Brayden Siler. Up 7-0, Olentangy would fumble the subsequent kick-off and a Troy recovery in Braves territory had them poised to score again quickly.

Another short possession lasting only 90 seconds would end in a 36-yard Siler field goal making the score 10-0 in favor of the Trojans. It would also be the last time Troy would score for the remainder of the contest. “It couldn’t have started any better,” stated Coach Gress about the outcome following an explosive start, “and we told them that this could be a long game and we’d be in for a dog fight.”

Despite the early lead by Troy, a quick and versatile offensive attack, led by the poised quarterback, Trent Maddox, would quickly get Olentangy on the board. Using a hurry-up style of offense and under the direction of Maddox, the Braves would find its way to getting 2 touchdowns in before the conclusion of the first quarter. Olentangy held the advantage entering the second, leading 14-10.

Olentangy’s offense appeared one step ahead of Troy’s defense all night, and one should not be surprised either. Maddox posted incredible statistics in the regular season, completing 177 out of 275 pass attempts on the year, with 23 touchdowns and 2102 yards in passing alone. “With a team like this you really have to find a way to keep them one dimensional,” said Coach Gress, “when they got the run and pass game going, they were pretty hard to stop.” 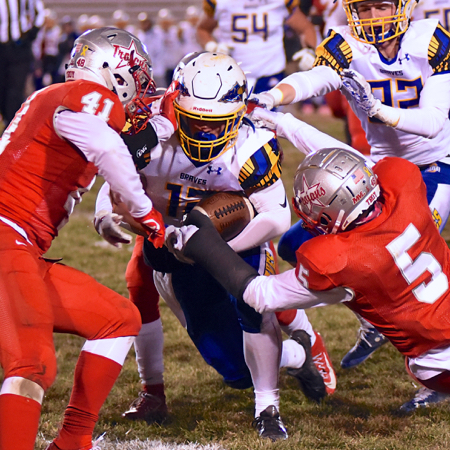 This didn’t stop the Trojans from attempting to make the contest an offensive battle. Troy would knock on opportunities door in two more possessions, including one late in the quarter which failed to convert on 4th and goal.

Olentangy did not relent on the chance to extend their lead. The Braves connected for touchdowns twice in the period, both on expertly executed passing plays by Maddox. He would end the first half completing 8 of 9 passes for a total of 149 yards in the air. The halftime score read 28-10 with Olentangy set to take possession to start the second half.

Unfortunately for Troy, the 3rd quarter brought them little change. An early Olentangy touchdown expanded the lead to 35-10.

With a glimmer of hope, Troy saw its only offensive possession of the quarter down to the one-yard line where they were stuffed at the line by Chase Middleton and crew. Middleton finished the game with 17 tackles for Olentangy with Mitchell Grubb not far behind at 15 tackles, a key part of the disruption of Troy’s offense.

Olentangy would score one more time in the third quarter. Following a failed offensive attempt in the fourth by Troy, Olentangy would employ clock management and close out the game with the 42-10 victory. 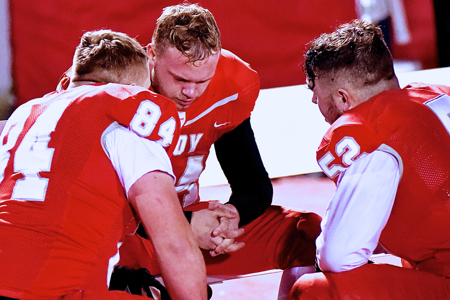 “What do you say when it’s your senior’s last game?”  said Gress.  “I’m proud of how this team stuck together.”

“What do you say when it’s your seniors last game?” Gress explained his rationale for how to wrap-up a season. “I could have sat down, rattled off the accomplishments, but we focused on how this team stuck together.”

Senior Brayden Siler, no stranger to unique accomplishments personally, was focused on unity as well. “This team was special, the love that we have for each other contributed to that,” stated Siler. He wraps up his senior year being a part of unique team and individual success. Brayden Siler crossed the 1000 passing yards mark in tonight’s game. Having already reached 1000 rushing yards, Siler is the first Troy quarterback to have reached 1000 passing and 1000 rushing yards in a career.

In Troy, after year one under Dan Gress it’s a tradition continued. A crowd of the Troy community stood by stadium fence, giving their thanks to the seniors soon to be moving on, and until next year when the faithful return to the shrine that has been created to celebrate another season of Troy football tradition.”

Dave Arbogast Buick-GMC is proud to host coverage of the Troy Trojans on Press Pros Magazine. 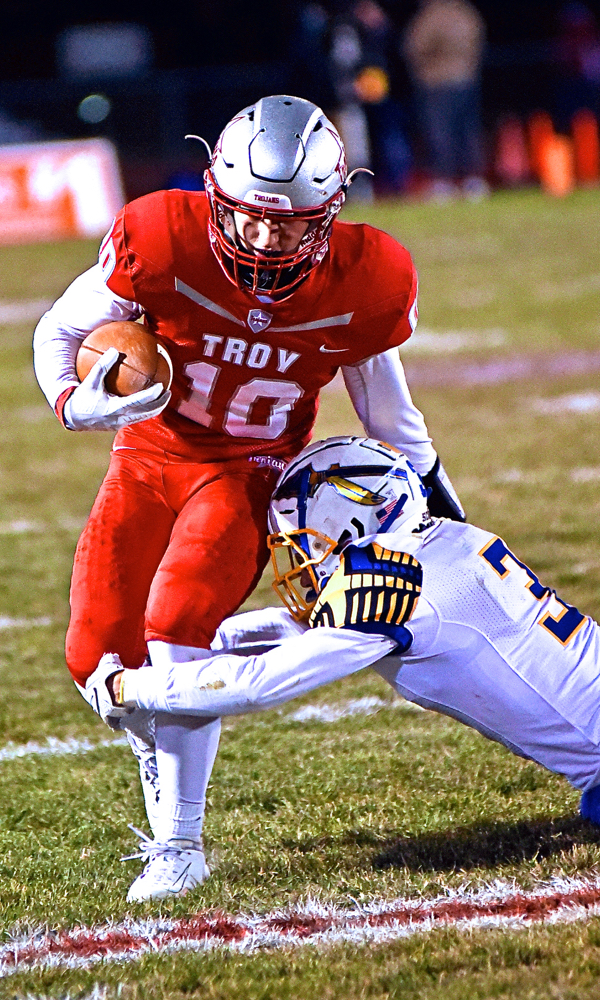 Troy's Nick Barr is dragged down by an Olentangy tackler, unable to build on their fast start in Friday's Div. II playoff game at Memorial Stadium. (Press Pros Feature Photos by Dale Barger)