After allowing Worthington Christian to fight its way back in the second half Friday, Covington took advantage of strong offensive line play and sound situational football to defeat the Warriors 33-27.

Worthington Christian climbed back into the game and gained possession down one score two times in the second half, but superior line play, a two-headed monster at running back and a touch of situational football notched a 33-27 win for the Buccaneers (9-2) over the Warriors (8-3).

“I’m just so proud of our kids, a resilient group,” Covington head coach Tyler Cates said. “The momentum switched in [Worthington’s] favor but we stayed together. I’m so proud of them.” 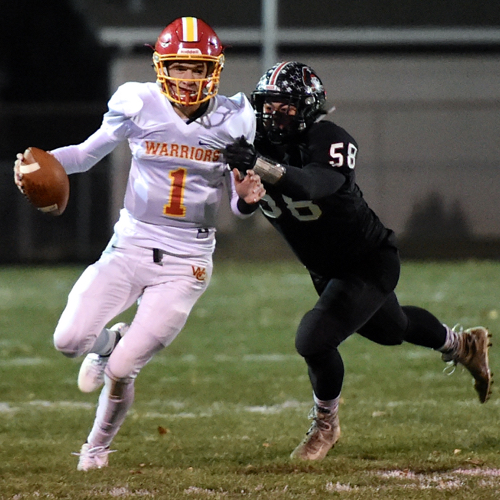 With 14 unanswered points and the ball after a recovered fumble, Worthington reanimated its once-dead chances and had a chance to take the lead with the ball at midfield down 27-21.

Then on second-and-10, junior linebacker Alexander Trentin combined with senior defensive tackle Teague Deaton for a sack to force an eventual punt.

Covington’s offense couldn’t break from its second-half stagnation, however, punting the ball back to Worthington again the next drive.

The Warriors stayed ahead of the chains, reaching third-and-1 before getting stonewalled on a quarterback sneak.

With a foot to go on the ensuing fourth down, Deaton led a horde of Covington defensive linemen into the backfield to stop a power run.

“Our defense just flew to the ball like they have all year and stepped up,” Tyler Cates said.

Deaton stood out most from an exceptional group of Covington linemen Friday, ripping through for another sack and swatting a pass on back-to-back plays the following drive. He anchored the Buccaneers’ offensive line at center, and his leadership on both sides helped Covington’s offense dominate Worthington’s in yards per carry, 5.2 to 2.2. 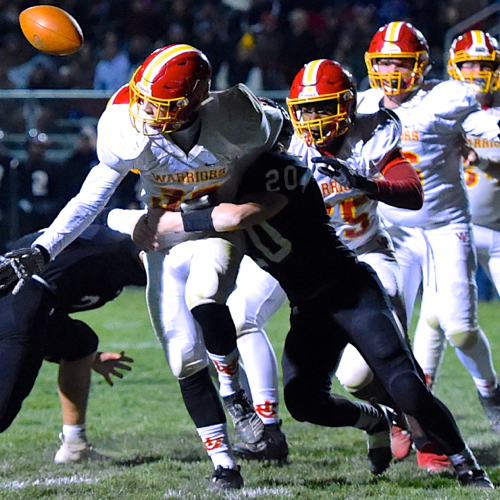 Covington’s Brayden Wiggins causes a Worthington fumble in the second half.

“He’s got the heart of a lion, does everything you ask him to do,” Tyler Cates said. “You love it for a kid like that, 4.0 student, works so hard, undersized and he just gives everything he has.”

Covington ran the ball seven consecutive times, picking up a crucial fourth-and-1 on a quarterback sneak by Cade Schmelzer, before the senior punched it into the end zone from four yards out to re-extend Covington’s lead to 33-21 with 5:58 to play. The two-point conversion attempt failed.

Worthington sophomore wide receiver DJ Moore entered Friday with over 1,000 yards receiving, and utilized the blazing speed that earned him his role as senior quarterback Lucas Hartings’ favorite target. The pair connected four times for 123 yards and a score.

That score regained an inkling of hope for the Warriors, a 43-yard bomb over the middle that was Hartings’ second touchdown throw of the night, cutting the lead to 33-27. The gunslinger added 274 yards through the air. 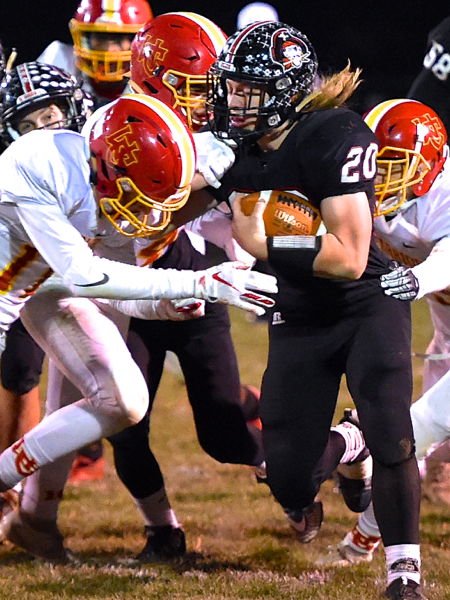 The Buccaneers pirated that hope away with a pair of first downs – one on another third-and-1 conversion — to bleed away the remaining clock their next drive.

Covington’s two feature backs, Trentin and senior Brayden Wiggins, finished with 55 and 101 yards rushing respectively and a touchdown each. Schmelzer added two scores on the ground.

“Thank God we were able to run the football, and I wanted to ball control them there,” Tyler Cates said. “I wanted the ball out of that quarterback’s hands, and get it away from [Moore] because he’s a heck of a player.”

A series of mental errors by the Buccaneers allowed the Warriors back in the game before they could put the playoff game to bed.

Back-to-back dropped passes turned the ball over on downs to start the third quarter for Covington, and an under-defended bubble screen to Worthington sophomore wide receiver Jaiden Reynolds pushed the score back to 27-14.

Worthington’s surprise onside kick the following play rolled past two Covington returners before the Warriors recovered. They picked up a free first down on a would-be fourth after a dead ball foul against Covington, then scored on a one-yard Hartings keeper to make it 27-21.

“The Spot” Restaurant, in Sidney, is proud to be the official sponsor of the 2018 OHSAA State Football playoffs on staging.pressprosmagazine.com.

“When they got that onside kick, I felt like we were losing,” Tyler Cates said. “The momentum completely shifted in their favor. Just proud of our kids to never give up. These kids don’t quit.”

Maschino made a magnanimous impact in the early going Friday, even if Moore, his man, made an impact at the end.

Following a solid gain of five yards that fell one slipped tackle away from a game-breaking run, Hartings rolled left and found space for his star 1,000-yard wide receiver, sophomore DJ Moore, on a hitch route along the right sideline.

Problem was, he waited one second too long staring down the speedster. 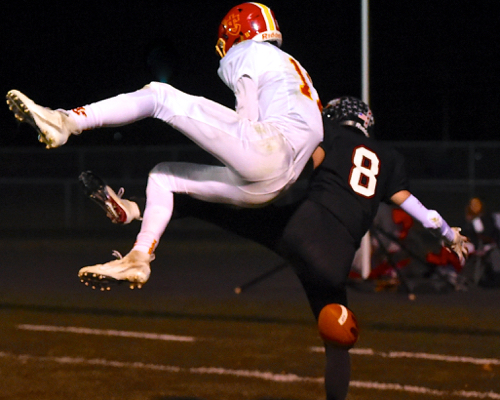 Covering Moore on the play was none other than Maschino, with five interceptions to his credit entering Friday’s game. He flew down in front of the wideout and added another to that total.

“That formation, we had got a tip that we thought they were gonna run a hitch there. We told our DBs, ‘If you see it, jump it,’” Tyler Cares said. “The kid read the scouting report and did a nice job on that play.”

After Covington took its first lead of the ball game, a rare ill-advised throw from senior quarterback Cade Schmelzer was destined for a tide-turning interception. Maschino knocked it from the defender’s hands instead.

When the Warriors pulled back within a touchdown, Maschino found room on a deep slant for 39 yards to set up a response for the Buccaneers, and they capitalized on a fourth-and-one conversion. They led 19-7 after a second failed extra point.

Maschino’s interception left just 31 yards to the endzone for the Buccaneer offense. It opened with five straight runs to gain 22 yards and set up a play action look for Schmelzer. His throw left his right arm with a tight spiral that arched over Worthington sophomore linebacker Daelon Johnston and into the hands of senior wide receiver Andrew Cates for a nine-yard score. Covington led 7-0 with nine minutes to play in the first quarter.

Covington again got a short field after a botched snap and protection on a punt, leaving just 39 yards between them and the endzone. After Maschino batted down a potential interception, the Buccaneers converted on fourth-and-three thanks to two strong blocks by senior right guard Nate Alexander and senior right tackle Dylan Staudt.

Schmelzer polished off the drive with a four-yard plunge to grow the lead to 13-0 after a missed PAT, 2:40 to play first quarter.

Covington rolled out a sweep to senior slotback Alex Schaffer as the first-half clock wound down, and he followed a thundering block on the perimeter by Andrew Cates for a 44-yard run.

Wiggins converted on yet another fourth-and-short before Alexander walked into the end zone just ahead of the halftime whistle to place the score at 27-7 after a two-point conversion.

Covington will meet Southeastern (11-0) next week in the regional semi-final. 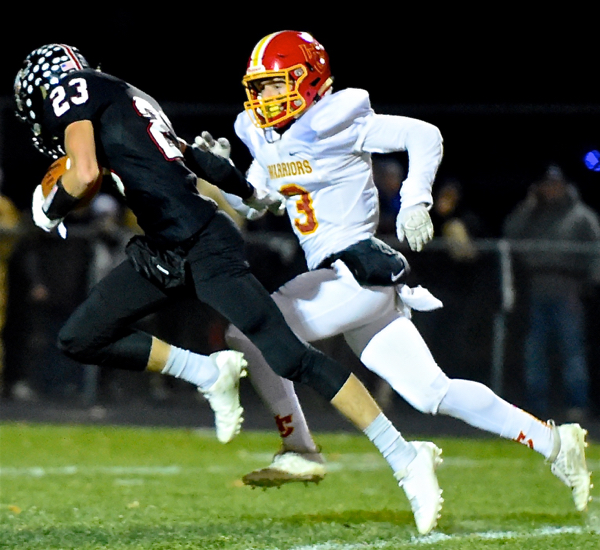 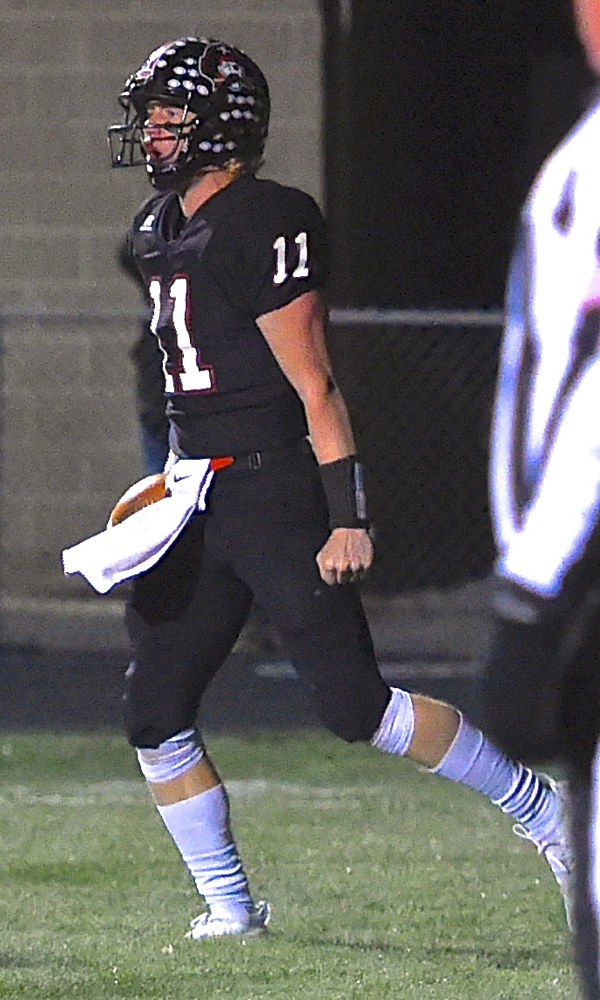