In a preamble to the first round of this week’s state playoffs, Press Pros profiles each of the teams involved from our principal coverage area for football – Miami, Shelby, Darkle, Auglaize, and Mercer counties…starting today with Division VII.

With nine area schools from the Press Pros coverage area involved with this week’s first round in the 2019 OHSAA playoffs, we sought the opinions last week of area coaches and football observers as to which of those nine portend the best chance of making it to at least the regional final round (third game), or even the state semi-final game.

All who contributed are quoted anonymously, of course, and all that we questioned about a particular team had seen that team play at least three times. We thought you’d be interested to read their comments leading up to the opening weekend with a series of short profiles, beginning today with Fort Loramie, Marion Local, and New Bremen, from Division VII. 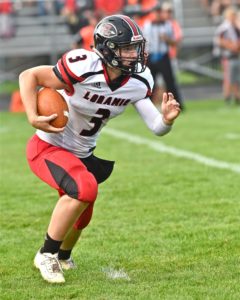 Quarterback Collin Moore is a tough leader and playmaker for Fort Loramie.

This thought struck with asking area coaches and football people what they thought about the Fort Loramie Redskins, the #3 seed in Region 28, Division VII, with a record of 9-1.

And that is…the only thing that could get in the Redskins’ way between now and Canton might be the Redskins’ schedule. That being, it’s been claimed for years that the reason MAC teams have so much success in the playoffs is because the league is so tough that teams are more hardened and prepared when they see top teams from other parts of the state.

“I think it could be a problem for Loramie,” said one coach. “It’ll be a real test when they finally get that team that they can’t just push past and run over,” said one coach. “They really have the personnel, but good players, especially, need to be challenged. You need to know that you can respond to the test.”

And the fact is that Fort Loramie has not been challenged since week 4 when they narrowly beat Covington, at home, 19-14. Since that time the cumulative score against their next six opponents has been something like 382 to 22, including last week’s 82-8 score over Tri-County North.

“They’ve got everything you need, particularly in Division VII,” says another. “Starting with a nice offensive line. (Collin) Moore is a playmaker at quarterback. The Brandewie kid (Nick) is a tough runner and they’ve got kids who can catch the ball. Plus, they’ve got good seniors who have seen big game experience.”

“The only thing I see in their way is an injury, or Marion Local,” said another. “Marion may not be Marion of the past, but you know they’re going to be tough to be in the post-season. And you don’t get ready for that by playing Bradford.”

“There’s no one in that conference (Cross County Conference) that can play with them, except for Covington,” a final word. “And that’s a problem because they really aren’t going to know what ‘good’ is until it’s too late. Going forward, they need a better and more competitive schedule in the regular season.”

When we asked people what they thought about Marion Local’s chances in the playoffs most steadfastly believed that NOTHING in Region 28 is going to test them, except Fort Loramie. The Flyers are 8-2, the #2 seed in Region 28, Division VI.

And the second thing they believe is…there’s little outside Region 28 in the rest of the state that’s capable of testing them, either.

“Hands down they’re the best coached team in Division VII,” said one observer. “That’s no surprise, of course,” says another D-VII coach from southern Ohio. “They have been for years. There’s no one down here who can play with them.” 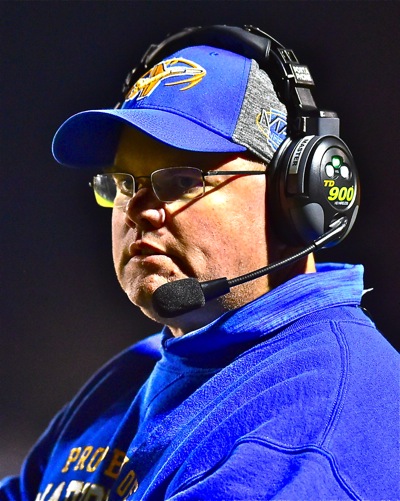 Regardless of youth, Marion Local has grown up around winning and they’re accustomed to expectation.

Uh, but don’t tell any of this to Tim Goodwin. He’s never taken any opponent for granted and that’s why he has those ten state titles.

But the Flyers have what very, very few teams in Division VII can claim and that’s all that championship experience, even with a team with so many new faces. They’re taught how to win, and they’re aware of the expectation to win.

“Yeah, but a lot of that experience graduates every year,” says one. “And this team is a different group of kids who haven’t played in those games.”

“Still,” says another, “they’ve grown up around winning and they’re accustomed to the expectation. Marion has that like nobody else.”

Many point to this fact…that with having to replace so many starters from last year’s state final team this 2019 group represents Tim Goodwin’s best coaching job in years. The running game is capable, the passing game continues to develop each week, and Marion still has impact players like Peyton Otte, Charlie Huelsman, and Brandon Fleck.

On an average Marion year you can take the opening statement more for granted. But on a year when they lost 18 starters it’s better to rein it in a bit. They’re still going to be a tough out, but don’t be surprised if they’re tested.

“But when you look at the region, even the top teams, it’s hard to believe that anyone’s as tough as the teams Marion’s already played,” adds another. “I’m sure teams have heard about them, but some of them are going to be shocked when they see them in person. No team, and I mean NO TEAM is going to be prepared better for the playoffs.”

When Chris Schmidt took the New Bremen job five years ago he said, “This will be a building job,” and he’s proven that by steadily bring more kids into the program and getting more wins out of them. 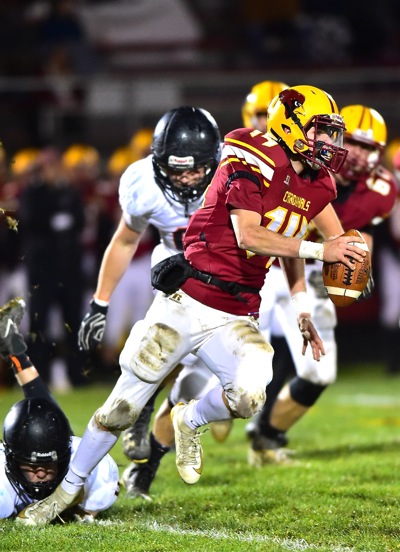 New Bremen quarterback Mitchell Hayes would rather run than throw, but don’t take him or the Cardinals for granted.

The Cardinals are 7-3 and the #8 seed in Region 28, Division VII. And they are building. When Schmidt took over there were forty in uniform. Now there’s sixty, and that figure is bound to increase next year with another infusion from next year’s freshman class.

They have played well at times this year, with wins over Fort Recovery, St. Henry, Versailles and Delphos St. John among their seven. But their losses have been egregious – to Anna (45-0), Coldwater (42-16), and Minster (42-2).

“It’s interesting that all three of their losses this year came against the very best teams in the MAC,” says one person we asked. “And that tells me they’re capable of beating just about every team in the region, including New Miami (their first round opponent this weekend).”

A fact that Schmidt, himself, acknowledged following last Friday’s 42-2 loss to Minster.

Says Schmidt: “Our seven losses the past two years all came against state-ranked teams. We are capable of surprising some people, and the playoffs will be a great experience for us. We just have to play better than we did tonight.”

“Their quarterback (Mitchell Hayes) is a nice player,” says another. “And they’ve got some nice kids around him. But the biggest thing they have going for them is the MAC. They’ve already played teams tougher than some they might see in the playoffs.” 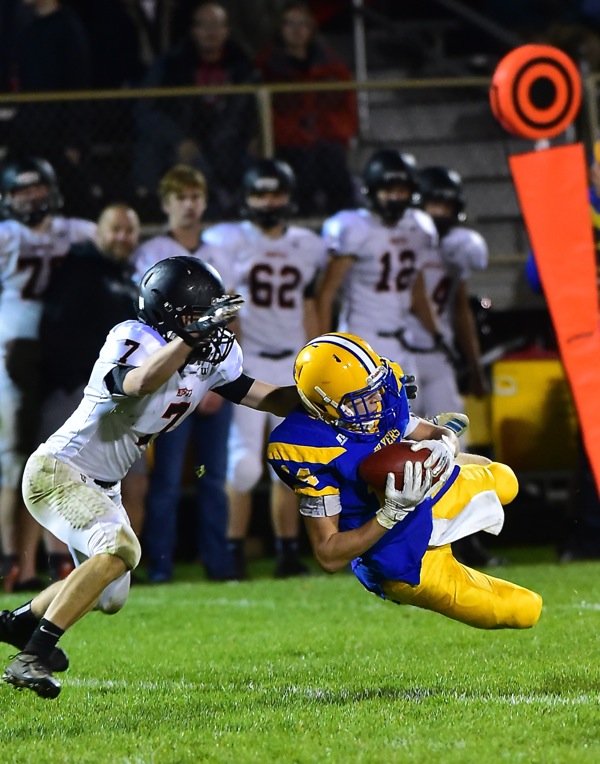