Marion Local set the tone early with a 57-yard run to start the game against Coldwater. It was all Flyers from there on with a 24-0 victory that clinched a share of the MAC title.

Maria Stein – There’s no official nickname for Marion Local’s offensive line that pushed around Coldwater on Friday night. But by the end of Marion’s 24-0 victory in front of their chilly but cheerful fans at Booster Field, they settled on a name all the Flyers could enjoy.

Four Midwest Athletic Conference teams entered Week 10 with a chance to claim at a least a share of the MAC title. Marion, Anna and Minster experienced triumph as they forged the MAC’s first three-way tie for the title since 1989. As for Coldwater, it was tough luck.

In addition to the title chase — you have to go back to 2010 to find the last time neither Marion Local nor Coldwater won a MAC title — Marion versus Coldwater had the hype of the state’s No. 1 ranked team in Division VII (Marion) against the No. 2 ranked team in D-VI (Coldwater). It came down to Marion’s physicality against Coldwater’s finesse.

And once the Flyers (8-2 overall, 7-1 MAC) established dominance on both the offensive and defensive lines, the Cavaliers (8-2, 6-2 MAC) struggled to match the Flyers’ strength. Marion delivered the first blow on the first play of the game. Senior Brandon Fleck took a hand off 57 yards to the Cavs’ 15-yard line. Three plays later his 5-yard blast up the middle gave Marion a 7-0 lead with just 1:37 having ticked off the clock. 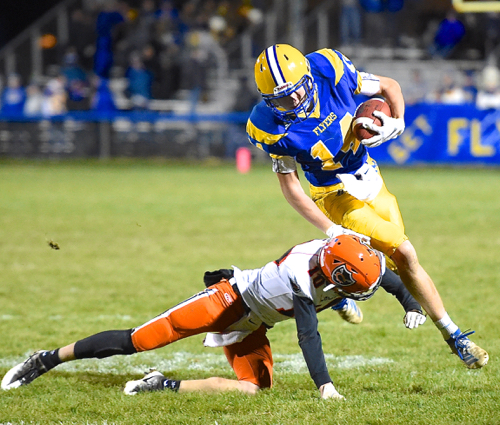 “That’s exactly what happened,” Coldwater coach Chip Otten said of getting knocked off the ball. “They controlled the front – both sides – and the first play of the game they had such a big hole. They beat us up front. When they get that blitz game going they bring it. If you can’t run on them at all then they bring the blitzes. It’s tough when it’s that physical.”

“That was definitely the goal to come out, be physical and set the tone early,” Ungruhn said. “We definitely did that with the first drive and continued it through the game.” 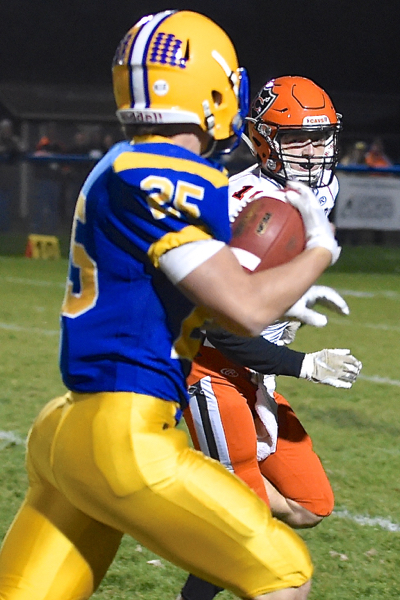 Marion’s Brandon Fleck led the Flyers with 130 yards and two TDs on 16 carries.

Fleck rushed 130 yards and two touchdowns on 16 carries. Meier, a junior, added 67 yards and a touchdown on 17 carries. The Flyers churned out 210 yards rushing on 40 carries.

“They’re not flashy. But they’re two tough dudes,” Goodwin said. “We like running backs that run downhill and are physical.”

Not to be outdone, Marion’s MAC-leading defense held Coldwater to 124 yards of total offense. The Cavs – who entered the game averaging 188 yards rushing — managed 27 yards on 22 carries. That’s 30 yards less than Fleck had on his first carry.

“We don’t match up great with big, physical up-front teams,” a disappointed Otten said. “They’re not overly big but they’re aggressive and physical.”

The game was as hard hitting as it was anticipated. And that was one of Marion coach Tim Goodwin’s team goals … to be physical and to be sound. The Flyers accomplished both with fundamental tackling and few mistakes.

“It was the whole 11,” Goodwin said of the team-win. “We wanted to be more physical than them at every level on offense and defense. For the most part I think we did that.”

Coldwater, trailing 17-0, mounted its best drive of the game to reach the Flyers’ 15-yard line in the second quarter. But an Everman sack pushed the Cavs’ back to the 25. A false start penalty put Coldwater at second-and-25 on the Flyers’ 30. Coldwater quarterback Jake Hemmelgarn nearly connected with a wide-open Noah Miller for a TD but overthrew him. Fleck then ended the drive on fourth down with another sack.

The Cavs converted two third downs on the 16-play drive. They were 0-10 on third down on their other drives. 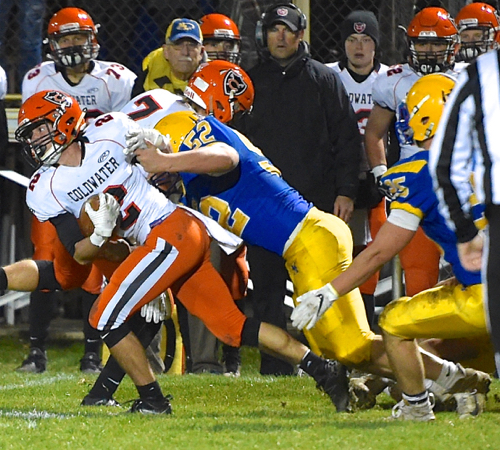 “I really think we’ve been playing as a team,” Ungruhn said of the reason for the Flyers’ success. “We don’t have that standout player we’ve always had in the past that’s been our get out of jail free card. We play as a team and play consistent.”

“It’s good to get off to a fast start,” Goodwin said of Fleck’s burst up the middle to start the game. “I think they were still a little bit shaky from the Anna game. Getting off to a fast start was important tonight just because of that fragility.”

Prior to Friday, Coldwater’s lone MAC loss was a stunning 49-8 setback to Anna. The Cavs rebounded last week with a 49-14 victory over St. Henry. The goal now is to get the Cavs heading in the right direction with the regional quarterfinal playoff games starting next week. 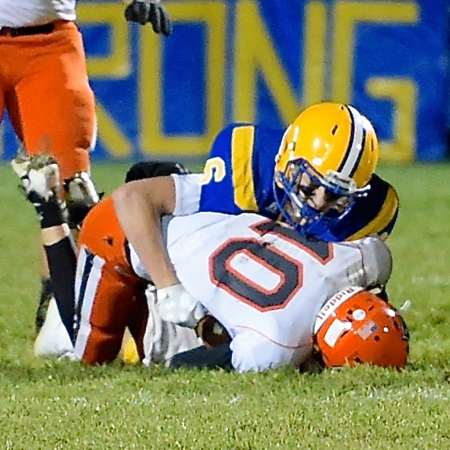 “We’ll see if we can regroup,” Otten said. “See if we’re all mentally in tune with it. You feel like you had a good season winning eight games, but in the two big games you get whooped. I don’t know if you can mentally recover and feel good about yourselves. We’ll see if we can rally them. That’s part of my job to get them believing they can play.”

Zack McKibben, as shifty as he is tough, rushed for 28 yards on eight carries and caught six passes for 45 yards to lead the Cavs in both. Hemmelgarn was limited to minus-8 yards on 11 carries. He completed 16-of-27 passes for 97 yards. Noah Miller hauled in six passes for 33 yards.

For Marion, quarterback Kyle Muhlenkamp completed 8-of-15 passes for 77 yards. His favorite target was Charlie Huelman, who grabbed five passes for 55 yards.

As odd as it sounds for a team that’s reached the state title game eight straight seasons … the Flyers were an unknown coming into this one. 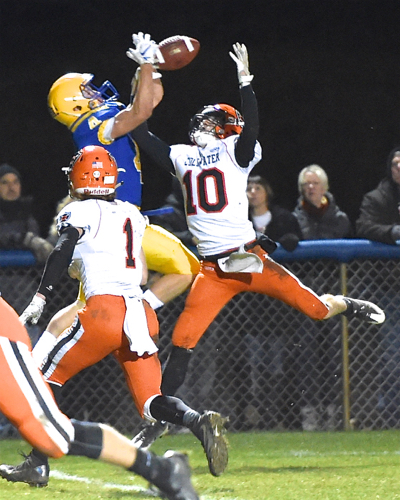 Marion’s Peyton Otte breaks up this pass to prevent a Coldwater interception.

“We lost so much from last year,” Goodwin said. “We did not know what we had. Slowly we figured out what we had. Some kids have come up big for us. Kyle Muhlenkamp at quarterback played really well for us tonight. He was a total unknown being behind Nate Bruns for two years. Brandon Fleck was good last year but he’s really stepped it up this year.

Marion Local entered the game sitting No. 3 in the Division VII, Region 28 computer points (the top eight teams make the playoffs). Coldwater entered No. 3 in Division VI, Region 23. The Flyers and Cavs will officially find out their playoff opponents when the OHSAA announces the first-round pairings on Sunday.

“We knew we came into the season underdogs,” said Muhlenkamp. “But in the locker room we knew what we had. We knew we were contenders and went out to play.”

And they’re not done yet. 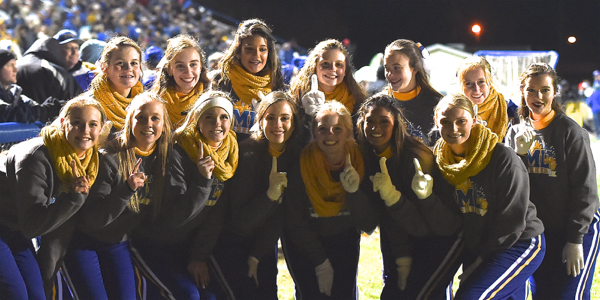 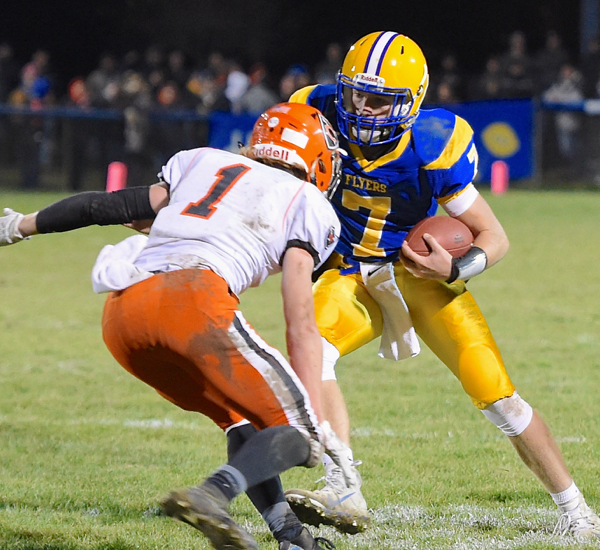