Trick Or Treat … Tigers Carve Out Win vs. Miami East

Versailles brought out all the tricks on Thursday nights semifinals in the regional volleyball tournament against Miami East.  And in the end they got all the treats with getting to advance to the regional finals for their eighth state semifinal appearance.

Kettering – In a nod to Halloween, the Versailles Tigers’ student section showed up for the Division III volleyball regional semifinals in a variety of costumes ranging from barnyard animals to unicorns to Scooby-Doo … and even Superman.

But as the Tigers’ volleyball team showed on Thursday night, not all superheros wear capes.

The Tigers – led by seniors Lindsey Winner and Brooke Stonebraker, among others, at the net – avenged a regular-season loss to the Vikings in a victory as sweet as a trick-or-treat bag overflowing with candy. Versailles carved out a 25-14, 25-20, 26-24 win to advance to Saturday’s regional championship game against Cincinnati Hills Christian Academy.

Versailles (15-12) – the defending D-III state champs – and CHCA (20-6) return to Trent Arena 2 p.m. Saturday with a state semifinal appearance up for grabs. 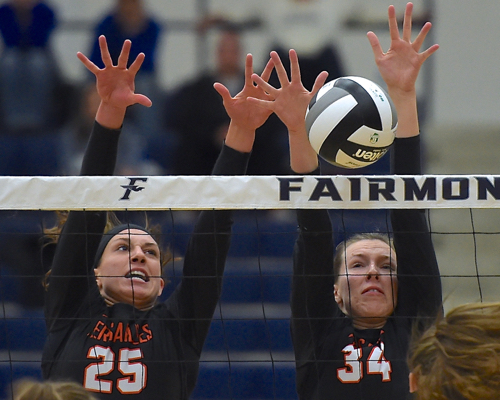 Lindsey Winner and Reagen Shaffer put the block up for Miami East’s offense.

Versailles and Miami East (18-10) met earlier this season at the Coldwater Invitational with the Vikings taking a 2-1 victory … 20-25, 25-19, 25-21. Neither East coach Dan Peterson nor Versailles coach Kenzie Bruggeman watched that game film.

“Early in the season, those games are a joke anyways,” Peterson said. “(Versailles) didn’t know what they were doing and neither did we. I started watching the film earlier this week and it was pointless. We were both so ugly in our play. … It looks good on the scoresheet but that’s about it.”

Thursday’s rematch was worth the price of admission, especially the third set. The teams were tied three times during the set. And though Versailles never trailed, the Tigers never led by more than four points.

The Vikings – trying to find a little hocus pocus of their own on the night to do it – trailed 23-20. East pulled to 23-22, bring their white-out attired student section to their feet. But Versailles sophomore Jenna Marshal pushed a shot through East’s defense to set up match point. An illegal touch on the Tigers and ensuing shot into the net tied it back up at 24-24.

In practice on Wednesday, Bruggeman told senior Rebecca Knapke she was serving for match point and had to hit her spot. Knapke missed. Knapke was in that same scenario again Thursday. She hit her spot as the Vikings sent her serve sideways for the game winner.

“It just so happened tonight she was back there and hit an ace,” Bruggeman said. 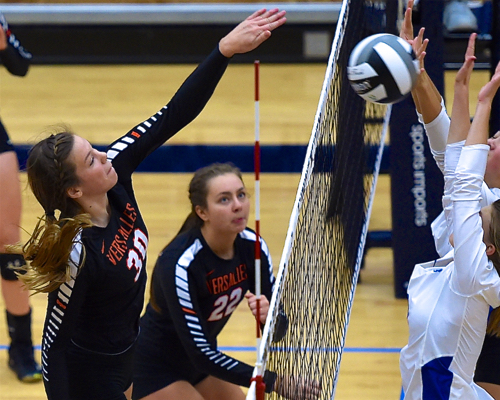 Brooke Stonebraker with one of her many kills for the night.

There’s no secret spell to the Tigers’ success by reaching the regional final despite being just three games above .500. Versailles also went 2-7 in the Midwest Athletic Conference to finish eighth. It’s the same MAC that has eight of its 10 teams ranked in either the D-III or D-IV state polls. Coldwater (No. 8) joins Versailles (No. 12) in D-III. D-IV looks like the MAC Invitational with St. Henry (No. 1), New Bremen (No. 2), Fort Recovery (No. 6), New Knoxville (No. 8), Marion Local (No. 11) and Minster (No. 19).

“It’s unreal. You get out of it and you see the different competition and the records,” Bruggeman said. “It really just doesn’t compare. The speed of it. The athleticism. The intensity. We’re so fortunate to be in that all season.”

Versailles’ length bothered the smaller Vikings from the start as the Tigers led 7-1 to start the first game. Winner, Stonebraker, Kirsten Bomholt, Emma George and Raegen Shaffer were among those with big hits or stops at the net. Miami East pulled to 14-12 in the set before Versailles took control with six straight points. The Tigers, consistently holding the Vikings to one point and out, scored the final four to win. 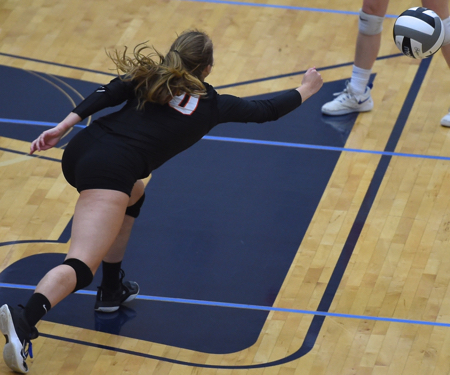 Rebecca Knapke lunges for a ball during Thursday’s match.

Six ties highlighted the second game. It was again tight in the closing moments with Versailles holding a 22-20 lead. A pair of East miscues and Stonebraker’s kill delivered the final points.

“I’m sick of seeing Winner kids in the lineup for them,” Peterson joked after the match. “ … We know it’s going to be a struggle with their height and our lack of height. We tried to slow it down and tried to hit different spots. When they keep coming in waves at you that tall it’s a little more difficult. 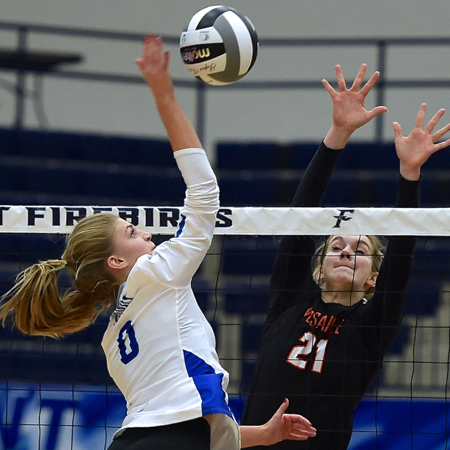 “I could write a book about the senior class, to be honest,” Peterson said. “We’ve grown pretty close over their four years here. They’ve won a lot of games. They’ve been a great group.

“It sounds bad to say we’re disappointed to lose in a regional semifinal when most teams would kill to get to a regional semi. It’s just our expectation at this point (to get here).”

Versailles knows the feeling. The Tigers go for their eight state semifinal appearance and third straight on Saturday.

“I love Dan as a coach and Dan as person. … My hat’s off to them,” Bruggeman said. “Definitely very glad we were able to pull it off and walk out of here with a win.” 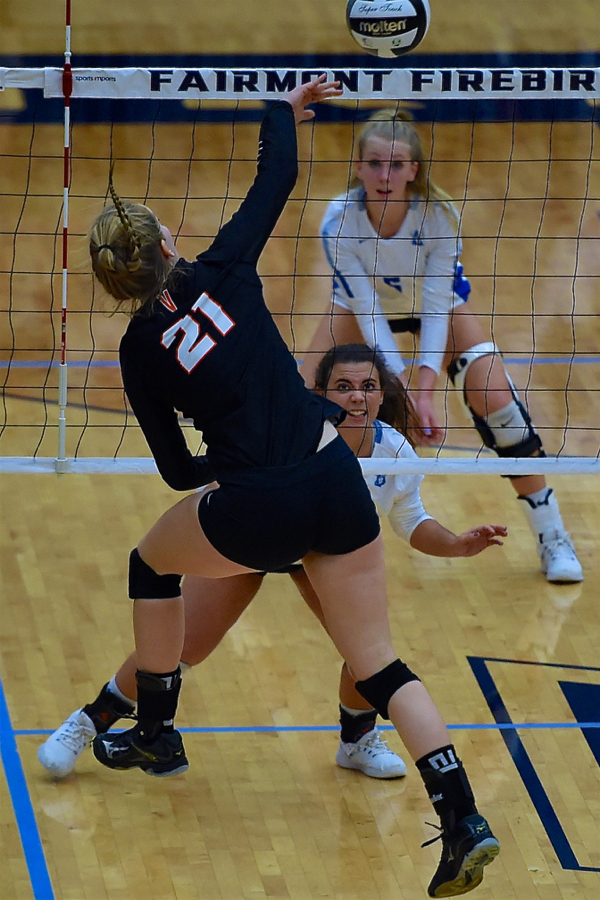 Emma George rises to the occasion and drills a shot down on the Vikings. 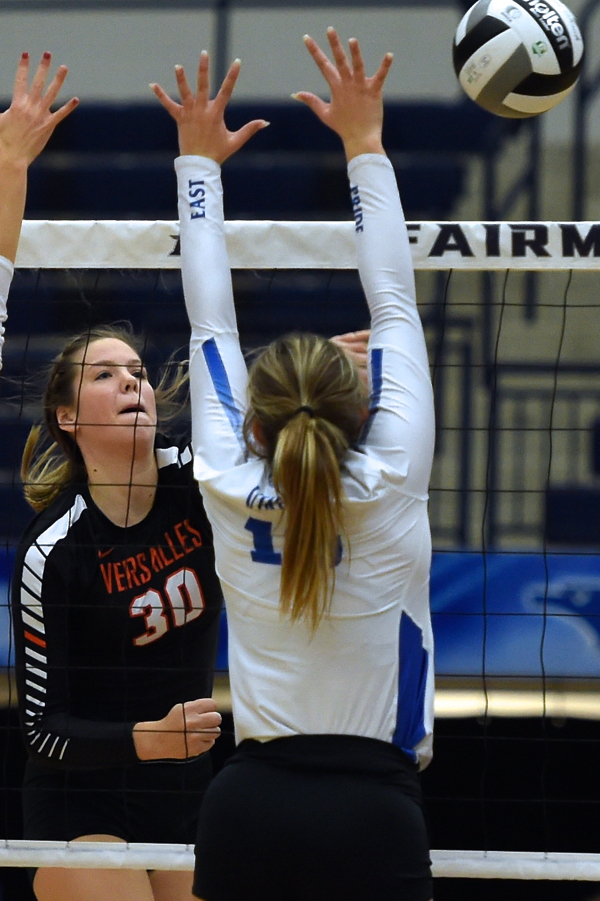