If Troy needed something to distract it from the setback of Friday night’s 24-22 loss to Xenia on a last-second field goal … well … the Trojans got it. This is Piqua Week.

Xenia – If next week was an average week, the sting of Friday night’s 24-22 loss at Xenia might linger with the Troy Trojans.

If next week was an average week, losing on a 21-yard field goal with 19 seconds left might replay in the Trojans’ minds.

And that could be what Troy needs coming off a discouraging loss at Xenia. As soon as the Trojans boarded the buses for Miami County they put the loss – and the celebrating still going on at Doug Adams Stadium – firmly behind them.

This, after all, is Piqua Week.

“That’s all our minds are going to be on coming (Saturday),” Troy coach Dan Gress said.

There were positives that came from Friday night, no doubt. The Troy offense dented a Xenia defense that, entering Friday, had allowed one touchdown in its last five games. The Trojans scored three touchdowns in the second half and put a season-high 22 points on a Bucs’ defense that had allowed 10 points total in its first five MVL games.

Troy’s defense, gouged by two touchdowns in the first 10 minutes, clamped down on the Miami Valley League’s best rushing attack. Xenia’s ground and pound offense rushed for 162 yards on its first two drives, both ending with touchdowns. Troy held the Buccaneers to 169 yards over its final six drives. 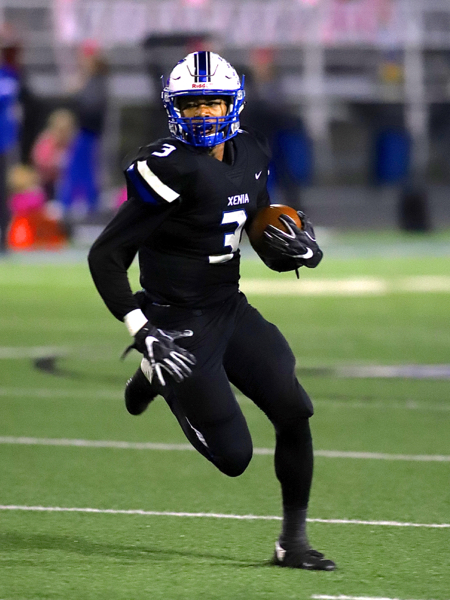 “I can tell you for dang sure that this coaching staff is most proud of how they responded. They didn’t crumble. They didn’t fall down,” Gress said. “They came out and kept swinging. We could not be more proud of them with how they stuck together in their character and how they fought that adversity.”

Troy took its first lead with 3:15 left in the game when senior quarterback Brayden Siler hit sophomore Josh Mayfield for a 20-yard touchdown. Mayfield went high over the Bucs’ defensive back – who had solid coverage – for his third TD catch this season. The Trojans led 22-21. They went for the two-point conversation to force a field goal to tie, but Siler was stopped on a roll out that turned into a run.

Xenia then took over on its own 44-yard line after Troy’s pooch-kick attempt. The Bucs used four plays (and a personal foul penalty) to face first-and-goal on the Trojans’ 3-yard line with about 1:20 left.

“We’d been pooching it all night to not put it in their best players’ hands,” Gress said. “I didn’t put (my team) in a good position and that kick is on me.” 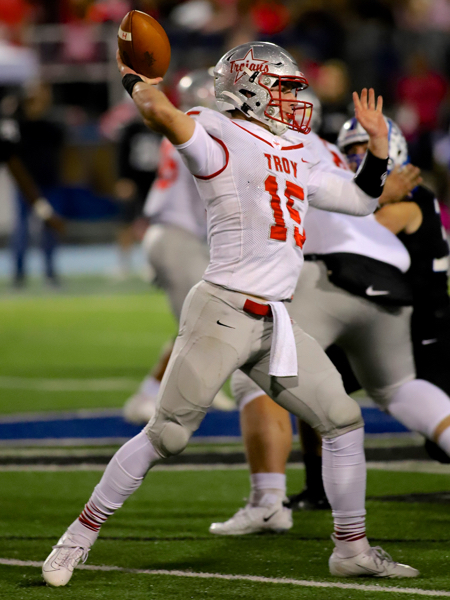 Brayden Siler ran for 99 yards and hit 5 of 9 pass attempts for 83 yards and a score.

On first down, Xenia senior quarterback Brett Russell took the ball to the 1-yard line. On second down, an illegal shift pushed the Bucs back to the 6-yard line. Russell again carried for one yard to set up third-and-5. On third down, shifty junior Kevin Johnson was stopped by Siler for a one-yard gain.

On fourth down, senior Hayden Falvey booted his third field goal of the season – a 21-yarder that sailed between the goal posts with plenty of drive and distance.

“As soon as my foot touched the ball it felt great,” Falvey said. “That was probably the most happy I’ve been. Ever.”

Troy’s last-gasp drive started on their own 35 and reached the Bucs’ 40 before Siler was dragged down desperately looking for a teammate to lateral the ball.

Xenia improved to 8-1 overall and 6-0 in the MVL’s Valley Division. The Bucs also moved into the No. 5 spot in the Division II, Region 7 computer points that determine playoff teams. The top eight in each region qualify. Xenia has never reached the playoffs since they started in 1972.

Troy fell to 7-2 overall and 6-1 in the MVL’s Miami Division. Troy holds a one-game lead over Greenville and Piqua with one game remaining in the regular season. The Trojans also sit No. 5 in the D-II, Region 8 computer points.

Xenia entered with a league-best 306 yards rushing per game. They managed 327 yards on 48 attempts against Troy. Johnson rushed for 127 yards on 14 carries and Russell – who did not attempt a pass all game – added 112 yards on 19 carries. Much of that offense came in the first half.

“(The defense) got put in some tough situations and they kept responding. That’s all we can ask,” Gress said. 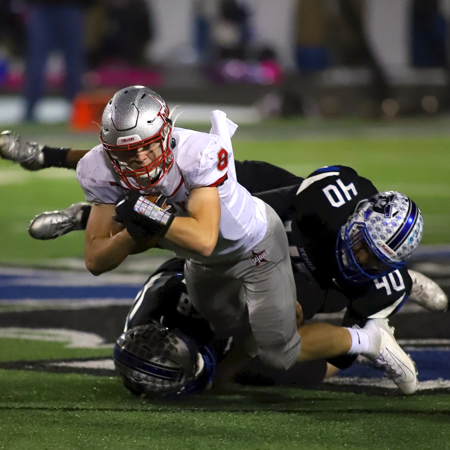 Troy’s Josh Mayfield is dragged down from behind in Friday action with Xenia.

Troy trailed 14-3 at the half, with the Trojans’ points coming on senior Tucker Raskay’s 21-yard field goal.

Troy opened the second half with a 15-play, 91-yard touchdown drive that lasted 7:52. The drive was capped by Kevin Walter’s five-yard run behind a big push by the Trojans’ offensive line to pull within 14-10 with 4:07 left in the third.

“We felt we had some areas we could take advantage of in the running game,” Gress said of Troy’s second-half surge. “That’s obviously our strong suit. That’s no surprise to anyone. They really got it going in the second half. The (offensive line) was executing at a high level. Brayden and Kevin were running at high levels.”

Xenia responded with a TD drive to make it 21-10 with 10 minutes left in the game. Troy then answered with a four-play drive that started on Xenia’s 45-yard line. Walters made it 21-16 on his two-yard run with 9:00 left. The two-point conversion run failed to make it 21-16. 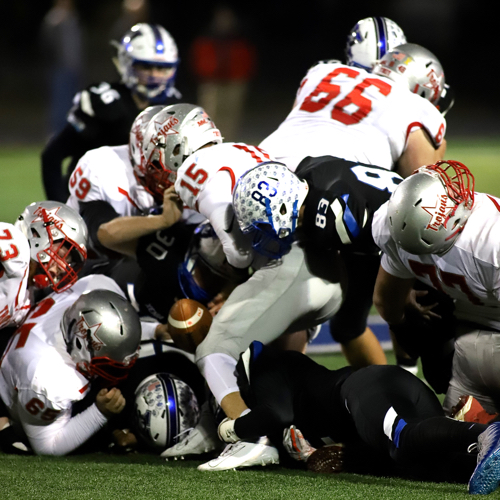 Brayden Siler loses the ball in this pileup during Friday’s loss to Xenia.

“It’s a credit to (Mayfield),” Gress said. “He puts himself in a position to be successful. He’s a student of the game so we can put him pretty much anywhere on the field — offensively and defensively – and you know he’s going to get the job done. That’s a credit to him for us to trust a sophomore like that.”

“Troy is a really good football team. Our guys really fought their butts off,” Smitherman said. “Troy pushed us to the brink. They played really hard. They didn’t quit. Our guys just fought.”

As Gress told his team in the post-game huddle Friday night, there’s still much to play for with one game left in the regular season. A win against Piqua next Friday gives Troy the outright Miami Division title. A win solidifies the Trojans’ playoff spot. And a win gives Troy another win over its biggest rival.

It is, after all, Piqua Week. 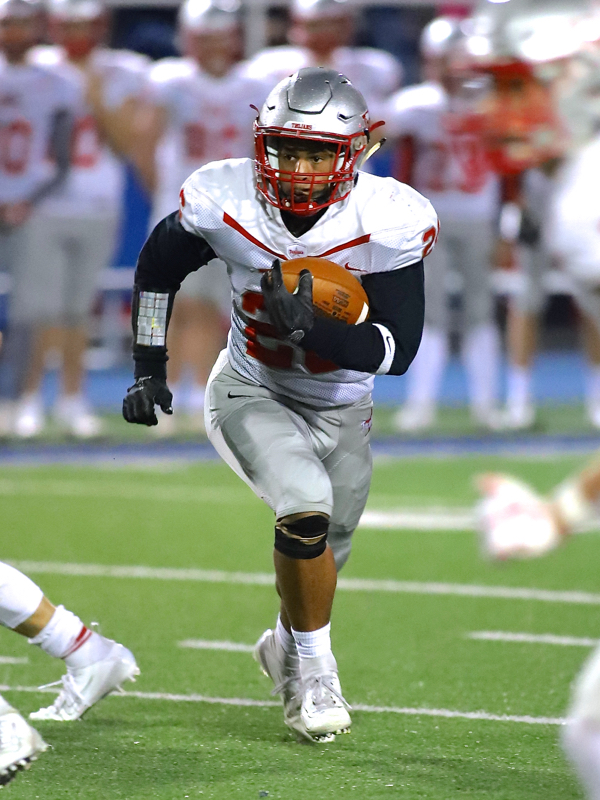 Troy's Kevin Walters ran for 119 yards and two touchdowns but it wasn't enough. The Trojans fell for the second time this season, 24-22, to Xenia. (Press Pros Feature Photos By Don Selanders)