The three entries claimed district titles in the span of five hours Saturday to set up what amounts to a Shelby County – Mercer County log jam at next week’s regional tournaments at Northmont and Elida High Schools.

In the afternoon’s first contest Loramie was the first to flex, crushing Cincinnati Country Day in straight sets, 25-9, 25-10, and 25-5.  So dominant was Loramie that CCD would only score five points offensively.  The rest of their point total came about as a result of missed serves and balls hit out of bounds by the Redskins.

Country Day’s main nemesis was junior hitter Kenzie Hoelscher, who led all scorers with 18 kills and rendered CCD defenseless against her height, athleticism, and power at the net.  Hoelscher drove one ball after another to all points of the court, and on more than one occasion had CCD defenders covering up to protect themselves.

“We knew they were good,”  said CCD coach Heather Recker, whose team entered the district with a 14-7 record.  Someone said it costs $27,000 a year in tuition to attention the Cincinnati private school, and by the end of the match they would have traded at least one tuition for someone to offset the efficiency and effectiveness of Kenzie Hoelscher.

“We just don’t see players and teams like that in Cincinnati in Division IV,”  added Recker.  “I told the girls before we played what to expect, and I think they handled the outcome very well.”

So well, in fact, that they were smiling broadly during the trophy and ribbon presentations.  They were glad to be done with Fort Loramie.

“I can’t control things like who we play in the tournament,”  said Loramie coach John Rodgers, regarding the manner in which his Redskins had swept through the sectional and district rounds.  “I can only control what goes on in my gym, and that’s where our focus is now.”

But he was also asked about how he adds the element of game stress to his daily practices, which he says are as demanding as game conditions.

“My staff can add the stress,”  he smiled.  “Now you cannot simulate the stress of being faced with losing in a tight match, however we are aware of the situation and we’re doing all we can to put as much game stress on them as we can.  We knew CCD had a big girl (Daisy McClean) in the middle, and regardless of what kind of player she is she represented a formidable blocker and challenge for us.  So we worked hard to be able to not go at their biggest player.  We ran pin to pin and played around her.  It seemed to work pretty well.”

Thirty minutes later Russia ran into a far more formidable challenge from the Franklin Monroe Jets (21-6), and a team that prides itself on chipping and tipping on offense, while frustrating opponents with defensive commitment that simply won’t let the ball hit the floor.  It took Russia two sets to figure it out, but after trailing 2-0, the Raiders came back to win 26-28, 22-25, 25-21, 25-23, and 15-2.

For the first two sets FM was vintage FM.  The Jets did frustrate Russia (15-10), winning 28-26 and 25-22  before the Raiders shook off its lethargy and began to exert its size and power advantage at the net.  In a close fought third set they turned to junior Ashley Scott, who began to send one searing shot after another over the net and through the Jets’ defense.  Russia got up by as much as five points, only to have FM make a late run, but ultimately they saved their season with a 25-21 win to extend the match.

In set four it was more of the same.  Scott continued to boom kills over the top of the Jets while behind her the Raider back line starting playing defense like Franklin Monroe.  They built a nine-point lead at one point, FM cut it to two at 24-22, but Scott and company even the match with a 25-22 set win. 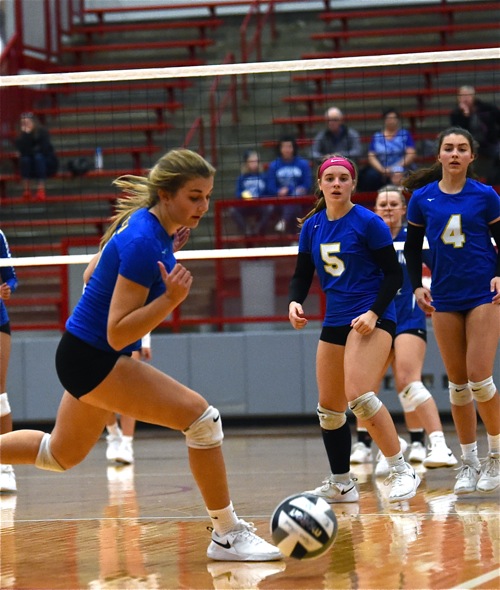 In the first two sets Russia could only watch as Franklin Monroe played their splendid defense and placed shots out of the Raiders’ reach.

“I was pretty confident when we had the big lead, even though they cut it down to two,”  said Russia coach Aaron Watkins.  “All we needed was one point.  Now if they had cut it to one it might have been different.”

Nonetheless, with the match tied the stress of losing back to back games, and the physical drain of playing so hard to win the first two sets began to take its toll on Franklin Monroe.  It proved to be too much in the deciding fifth.  The Jets fell badly, 15-2.

“There’s no question that their size and power hitting had an effect on us after the third set,”  said Jets coach Angie Filbrun, tearing up in her support for her disappointed girls.  “We had one of our girls pull a hamstring, so we were trying to play around that injury, and when they came out and decided to play in that third set I knew then that it was going to be tough.  I knew we were going to have a battle on our hands.”

Russia had beaten FM in straight sets during the regular season, but it was a different Russia team back then.  Those six freshmen that played then weren’t playing like freshmen on Saturday, and Watkins would explain that the fact of experience had as much to do with their winning as strategy.

“I think a month ago we would have lost that match in three,”  he said afterwards.  “But the freshmen have matured, the girls have come together as a team, and there were no individuals out there today in that third, fourth and fifth set.

“Their defense would compete with anyone in the state,”  he added, paying tribute to FM.  “100%, they’re as good defensively as you’ll see.  But in the third set we made some lineup adjustments so that Ashley was in the front row more, and that put her against FM’s shorter middle blocker.  At that point we just tried to get her the ball.  She was phenomenal tonight and set a school record for kills in a match with 34.  And for the season she’s at something like 340 after tonight, and that’s a school record, as well. We just created some better matchups in those final three sets and let Ashley go to town.” 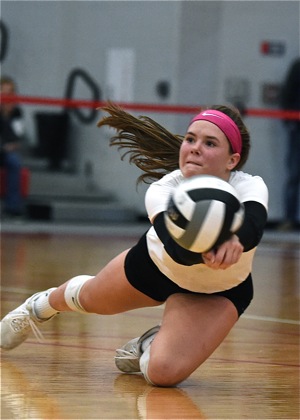 Russia’s Kendall Monnin played some defense of her own in the Raider’s five-set district win.

Watkins, of course, is a financial advisor during the day, and at the outset of the season he shared that the Raiders would again go to the regional tournament, even while playing six freshmen.  Saturday he made good on that promise, the first time in school history that Russia had advanced to the regional round in three consecutive years.  He was asked if he was as clairvoyant in matters of finance as he is in volleyball.

“If I was that good with investing people’s money I’d invest more of my own.  I’d be on a beach somewhere and I wouldn’t be coaching,”  he laughed.

Finally, in the day’s third match Fairlawn overwhelmed another Cincinnati team, Cincinnati Christian Academy, in straight sets – 25-13, 25-16, and 25-16 – marking the set time in three years that the SCL has swept the Troy district tournament.

And as to the log jam it creates in west-central volleyball from Mercer, Auglaize and Shelby counties next week, Aaron Watkins shrugged his shoulders and headed for the door.

“We just keep chugging along,” he said.  “One match at a time. We’d love a rematch with Loramie, but it’s one day at a time in this tournament.”

And is there such a thing as an immovable object ahead, in the form of #1 St. Henry, #2 New Bremen, and #3 Fort Loramie? 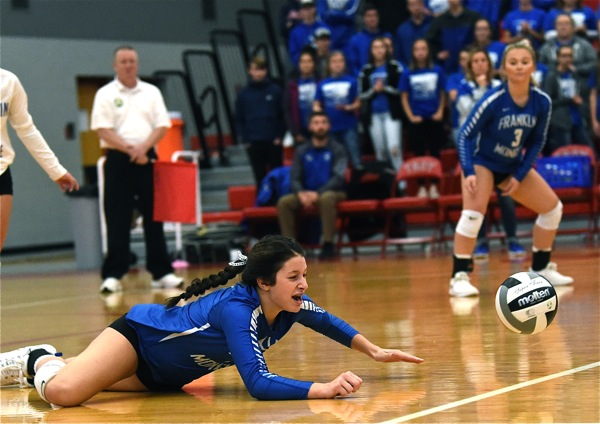 They couldn’t get ’em all…and Russia’s size and dominance at the net finally wore on Franklin Monroe in the fourth and fifth sets. 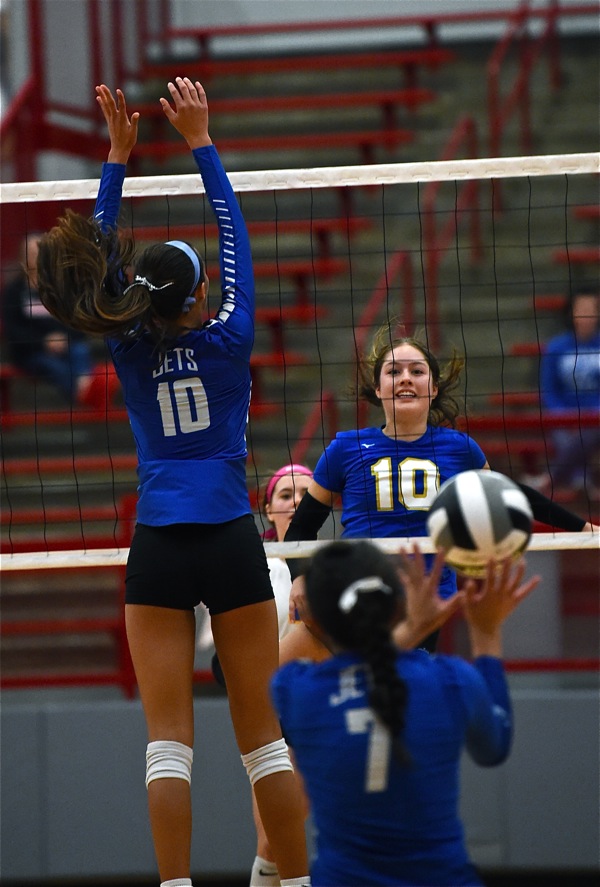