“It Never Gets Old”…New Bremen Tops Marion In District Final

They started out like a house afire, cooled off, then ignited again at the end…New Bremen tops Marion Local in four sets to gain another district title in Division IV volleyball.

Bluffton, OH – Never let it be said that New Bremen’s Diana Kramer is not a good company man (or woman).  She’s very, very proud of the Midwest Athletic Conference legacy in volleyball, and following her Cardinals’ 3-1 win over Marion Local in the Div. IV district final Thursday night talked with some remorse.

“I know there are going to be at least two league teams in next week’s regional round,”  she said to reporters.  “But you know, there are more MAC teams that could have been there as well.  That’s how good our league is.”

“No, it never gets old,”  she answered the question.  “It’s very humbling, actually, because volleyball is so competitive in our area, and in our district and regional tournament, it can make you go crazy.  It just speaks volumes about how good it is, and now our senior class has won four district championships.  It’s probably one of the winningest senior classes to ever play in the MAC, and you know that’s saying a lot.

“I can’t speak more highly of a group of seniors that have bought in and worked so hard to change the culture of a program.”

It was expected that the #2-ranked team in the state would, in fact, be too much for Marion, a team that lost to Bremen in straight sets just two weeks ago, but after a stumbling start the Flyers came back in the third set Thursday to throw water on any premature celebration. 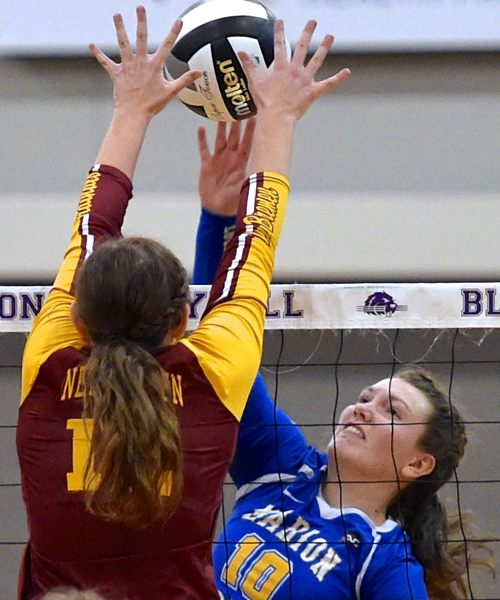 “We’re two programs that are similar.  We’re both very aggressive in style,”  said Flyers coach Anthony Chappell.  “So we were able to come back in the third and swing the momentum back our way, and it swung back and forth a bunch in the two final sets.  I don’t think Diana and I know how to coach any other way.  It’s a roller coaster ride every time we play because we’re going to be aggressive all the way to the end.”

After a start in the first set that saw multiple ties, New Bremen finally kicked it into gear with a 10-3 run to pull away to an eventual 25-20 win.

Then their serve game caught fire in the second game…and that blood in a shark tank feeling that they get when everything’s clicking.  Marion looked defenseless as New Bremen plastered the court with an exhibition of just how good their offense can be.

But as Chappell said, Marion is a team capable of playing that same way, pushing back, and in the third set rocked Bremen back on their heels with some of the same medicine – better serves, serve receive, and kills that sliced through the Cardinal defense at the net.  Marion took the set, 19-25, and it looked like the coaster was in full climb. 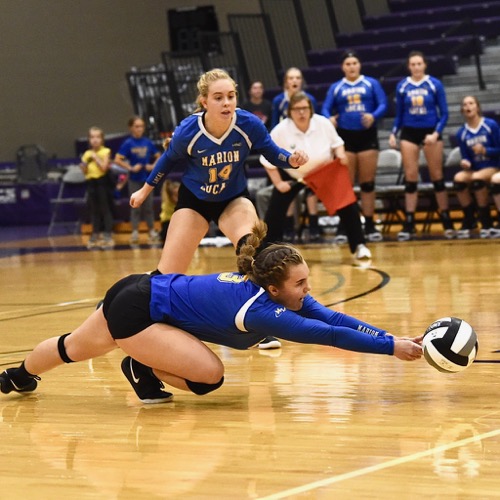 Everyone’s watching…as Marion’s Lydia Griesdorn tries to get a hand on a Taylor Paul shot in the deciding fourth set.

But as fast as they falter, New Bremen is just that capable of flipping the switch, and they did, getting out to an early lead, then withstanding a Marion push to go up by as many as seven points…only to see Marion come back and the end with some torrid serves that tied the hands of Macy Puthoff, Taylor Paul, and company.

“We’re up by six in the set and they serve three aces,”  said Kramer.  “In a matter of a minute they cut the lead from six to two and you feel like you’re actually down.”

Marion could get no closer than two before the Cardinals closed things out with match point and a 24-22 win.

Four straight is something of which few programs, or even seniors can boast. 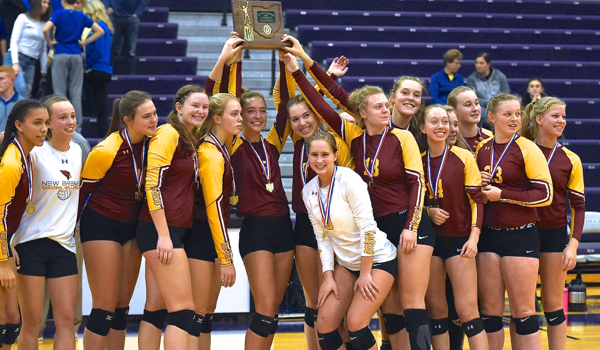 “It feels really good,”  said junior Claire Pape, who now has three district titles of her own, and of course, a chance for four next year.  “We played really well, we had to stay focused after that third set, and we did.  We worked together and did a good job to come back.  We tried not to get too high, or too low.  We just tried to stay calm.”

Ellie Roetgerman, who had missed time with a badly sprained ankle, came out in the fourth set and caught fire from the serve line, giving her team a lift during the Flyers’ bid for a comeback.

“It was a little nerve-wracking, but I knew my teammates had my back,” said Roetgerman.  “I knew they believed in me and serving is something we work on a lot.  It’s like a motor skill and once you get the first one you block out the crowd and it’s just like practice.” 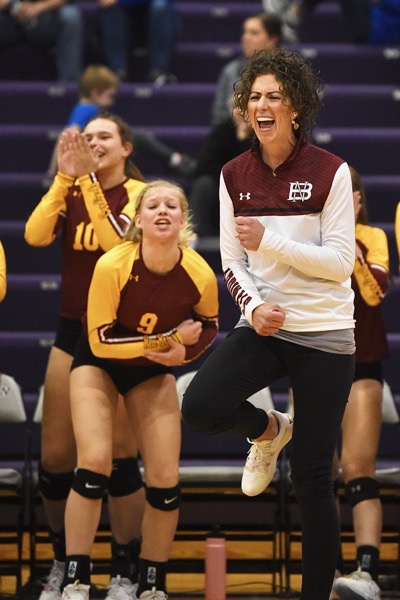 Who’s excited? Diana Kramer, that’s who, as her Cardinals prepare to meet St. Henry again in next week’s regional round.

As usual, they spread it around.  Josie Reinhart, Taylor Paul, and Macy Puthoff all had nine kills.  Pape had 30 assists and Diana Heitkamp had 19 digs.  But Diana Kramer, who from day one has believed that the Division IV title would go through a MAC contender, was no less convinced when it was over.

“Marion is so similar to us, they get after it.  Kudos to my team for coming through with it, but they put up a very good fight.  No matter who wins the other district match (St. Henry beat Fort Recovery in five sets), they’re going to bring it, too.  The gym’s going to be packed and it’s going to be nuts.  You know, really, more MAC teams should have this opportunity, but unfortunately that’s the system that’s set up and we’re not going to change it.  Duke doesn’t play UNC if they’re both ranked #1 in the round of 64 or 32.  It’s high school sports and this is the way it’s done.”

#2-ranked New Bremen now faces #1-ranked St. Henry in a rematch of last year’s region next Thursday at Elida High School, and Kramer is looking for nothing less than a repeat of the effort against Marion to get there.

“Absolutely,”  she said.  “These girls play hard.  They get after it.  You walk into one of our practices this week and you’re going to see people getting into each other’s faces.  They want to win…at practice, during the game…how you practice is how you play.” 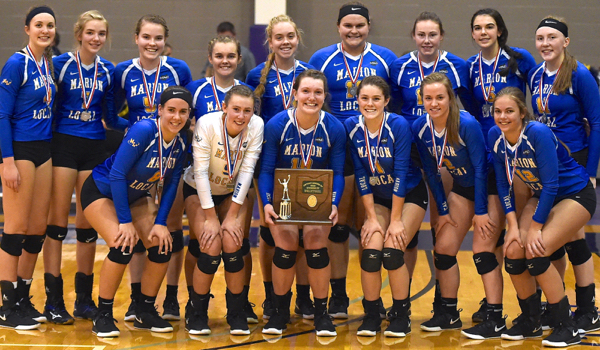 Marion Local poses with the district runner-up trophy, and proved to be worthy opponents. 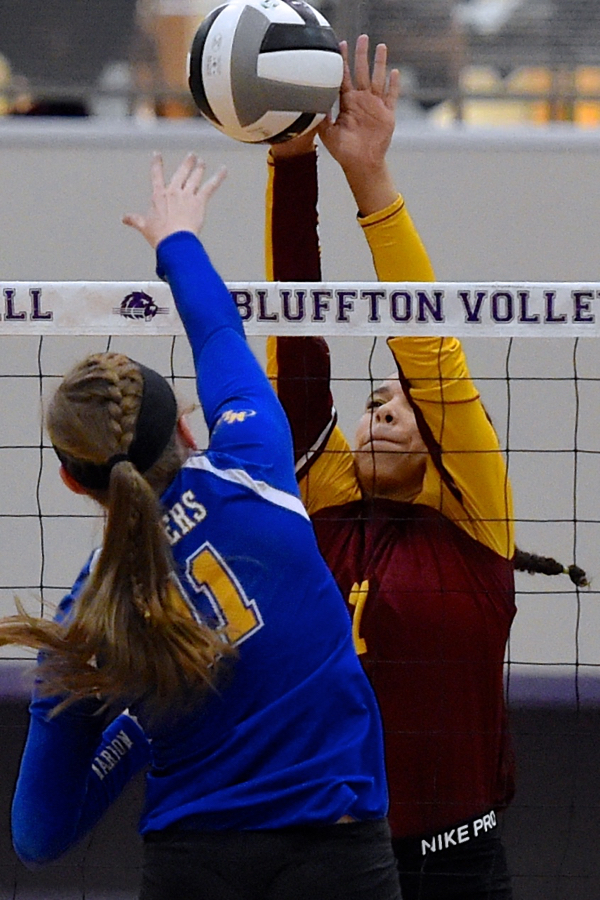